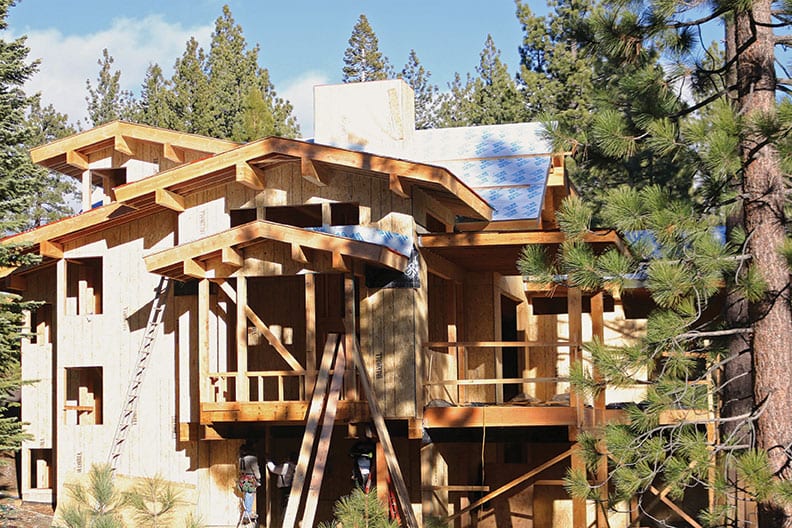 As Tahoe’s high-end housing market continues to thrive, much of the area’s workforce is struggling with a lack of affordable housing options, photo by Sylas Wright

The question “Is there a housing crisis?” elicits a hearty eye roll and a “Duh” from any local who has attempted to find rental housing in the Tahoe region. Even if you are snug in your own Tahoe home, the crisis is obvious.

You see it on a 7 a.m. drive from Truckee to Reno, when a steady stream of rush-hour lights is heading in the opposite direction. It’s in the frequent pleas on Facebook from young couples searching for an affordable place to live, and the waves of discouraging comments from others on the same quest. And then there are the countless help wanted ads at local businesses desperate to find workers who already have a place to live, because if a potential employee can’t find a place to live, he or she will not become an employee.

Bringing more affordable housing to the Tahoe region is complicated, and many of the issues cannot be solved solely at the local level. However, the formation of the Mountain Housing Council (MHC), a project of the Tahoe Truckee Community Foundation (TTCF) launched in spring 2017, is looking to accelerate housing solutions. The MHC includes 25 partners from government agencies, nonprofit organizations and private businesses in the North Lake Tahoe and Truckee region.

“The partners are committed to quarterly meetings with a robust agenda,” says Ashley Cooper, TTCF communications manager. “The focus of the group is straightforward: Getting people into the right kind of housing as efficiently as possible while honoring our environmental responsibilities and community character.”

“A couple things are very exciting about the MHC,” says Stacy Caldwell, TTCF’s chief executive officer. “We structured it as a nimble collaboration, with many of our community leaders at the table committing financial resources. We appreciate the support from their boards who have prioritized housing as top of the agenda for the next three years.”

The Mountain Housing Council has developed a map of the North Tahoe and Truckee region’s public land in order to determine potential for a range of housing types. New ordinances and policies are being explored that allow for innovative housing such as tiny houses and co-op housing, which combines communal living space with personal private living.

“We need to clearly articulate what housing we need and streamline the permitting process, making it more user-friendly to walk through the process,” says Caldwell.

Sam Drury, who served as president of the Tahoe Sierra Board of Realtors in 2017, agrees. He’d like to see restrictions ease on the creation of “accessory dwelling units,” which around Tahoe could mean converting space above the garage or a guesthouse into a long-term housing opportunity.

“We are actively involved in trying to hammer out a solution,” says Drury. “The state is encouraging softening of rules for these units, but they still must comply with local zoning.”

The MHC hopes to make it easier for the boards of local governments and public agencies to adjust zoning and permitting fees, making it more affordable for homeowners to add an additional unit or for developers to build multi-family/apartment projects. But the process of changing regulations is complicated and doesn’t happen overnight.

“Why aren’t apartments popping up? They just don’t pencil out,” says John Falk, legislative analyst with the Tahoe Sierra Board of Realtors. He says that zoning and the fee structures discourage multi-family housing. “We need more flexibility and allowance for higher density to offset the cost.”

In recent years, most builders have been focused on the high-end second-home market, because the cost of land, zoning and upfront costs lead builders in that direction.

“Upfront government costs can add up to over $40,000 per unit before breaking ground in the Tahoe region,” Falk says. That is a tough nut for an apartment given the return on investment that can be expected. “A large house pays the same amount as an apartment. We need to figure out a way to fairly distribute government expense to keep projects that are needed in the region,” he says.

Heidi Hill Drum, chief executive officer with the Tahoe Prosperity Center (TPC), believes the key is to “encourage high-density development in town centers.” She sees this as a win-win situation, protecting the environment from sprawl, keeping workers in the center of the community—where they can support local businesses and be a part of the fabric of their town—and reducing blight.

The TPC is spearheading the Tahoe Workforce Housing Project, which will remodel old motels into high-quality one- and two-bedroom apartments for long-term rental in the centers of towns around Lake Tahoe.

“Tahoe has a lot of old motels and blighted properties available, which is an opportunity to turn it into local workforce housing. And the time is now as we have the right people at the table willing to work on this issue together,” says Hill Drum, who hopes that construction will start on at least one project in South Lake Tahoe in 2018 before expanding around the Basin. 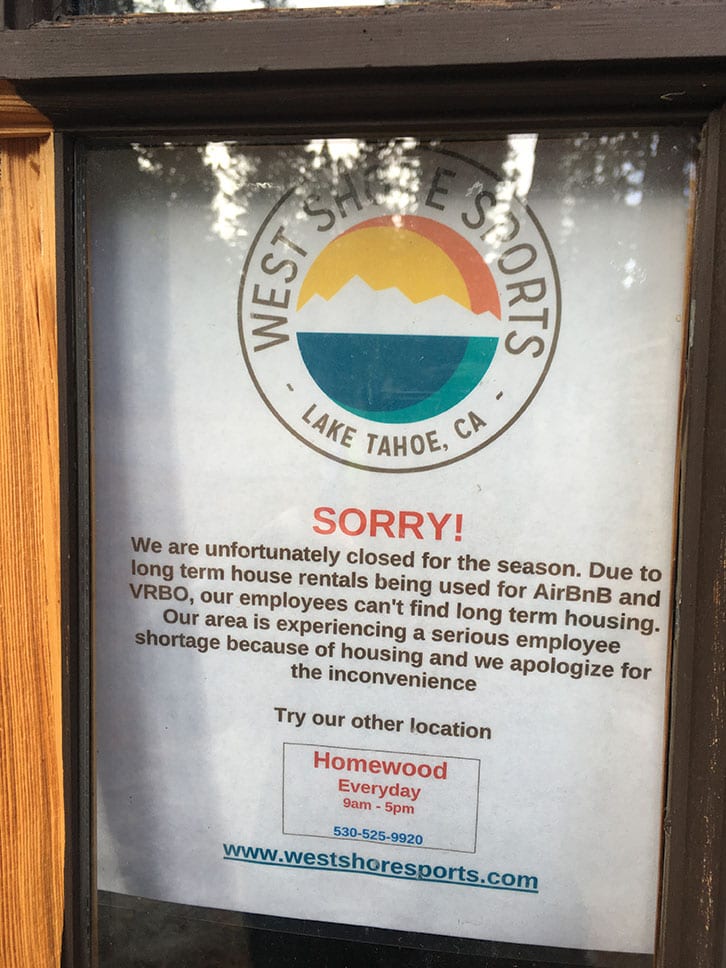 With 65 percent of existing housing inventory vacant a large portion of the year, according to the MHC, many Tahoe locals blame online vacation rentals—Vacation Rentals by Owner (VRBO) or Airbnb—for the lack of long-term rentals. “VRBOs are getting painted as the fall guy for the problems,” says Drury.

Although it varies by neighborhood, Falk says that for the last several decades, more than half of the home buyers in the Tahoe area have been second homeowners. Many purchase their properties with the express purpose of using them part of the time, and renting them out the rest of the time. Before online rental services, this service was provided by realtors and rental agencies. Drury emphasizes that it is not the online rental agencies that are causing the lack of long-term housing; it is that people buy homes to use them, not rent them long-term.

MHC would like to increase the percentage of these homes and condos that become long-term rentals. First and foremost, according to both Falk and Hill Drum, it’s important to get the word out that, for most homeowners, it’s more financially lucrative to rent long-term than to do vacation rentals. While there are well-publicized examples of lucrative short rentals, many of these rentals are dependent upon the ski season and storm cycles, and require a lot of extra expense compared to long-term rentals.

For those who use their properties only in the summer or winter, one proposal is to rent it the other half of the year to seasonal employees.

“Perhaps we offer homeowners an incentive, to charge a reasonable rent to a limited number of employees, and receive a subsidy from the county,” says Falk. “It’s a great use of underutilized housing.”

Another factor that Falk says needs to be addressed is a complicated one and might require state action. “Many people don’t want the headaches of being a landlord,” he says. “How do we offset those headaches? California is so tenant-centric, being a landlord is a challenge. Statewide, we need moderation for landlords.”

Another fix is for employers to provide housing. While large employers, such as ski areas and casinos, are the first that come to mind, a big concern is public agencies.

Last winter, several agencies that provide infrastructure such as power and water were caught off guard when essential employees couldn’t get to work because they drive long distances and major freeways were closed. What happens in an emergency if police officers and firefighters can’t make it to work?

“This is threatening all of our businesses and our agencies,” says Caldwell. “To get agencies to see housing as an issue is a challenge; they were not elected to solve a housing problem. But maybe they can do their own piece of it.” She is encouraged that MHC has been effective at bringing the issue to the forefront. “They are leaning in and engaged,” she says. 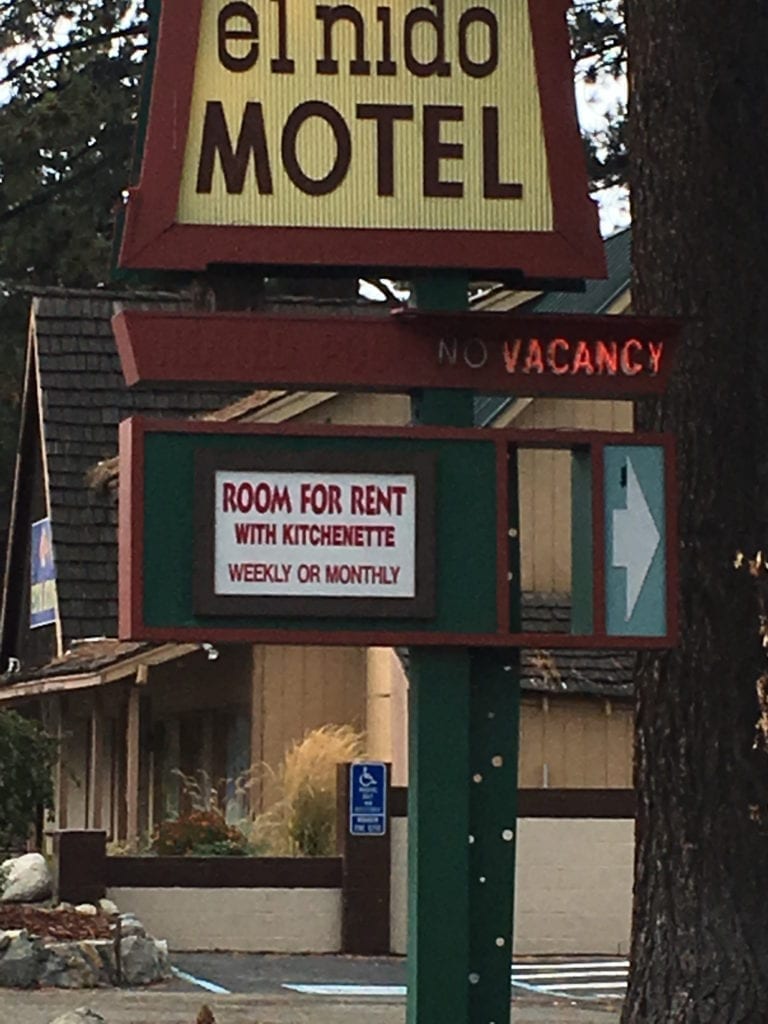 A motel on Highway 50 in South Lake Tahoe advertises monthly rentals, an example of how many of Tahoe’s old motels are now used for workforce housing, photo courtesy Heidi Hill Drum

Providing the housing the Tahoe area desperately needs is a daunting and complicated task, and it is a state and national problem as well as a regional one. The good news, as proved by the multiple organizations working with MHC, is that many groups—who in the past have not necessarily been on the same side of Tahoe-related issues—are working toward solutions. Now the task is to get past the talk, and get to action.

“Dealing with the housing crisis is like a river that is dammed up with rocks,” says Hill Drum. “The rocks are land costs, construction costs, sewer hook-up fees that are too high and a permit process that takes too long, among other things. All these things are discouraging workforce housing. Our goal is to take the rocks out of the river.”

The way to get those rocks out, Hill Drum believes, is to incentivize actions that bring more rental and workforce housing to the region.