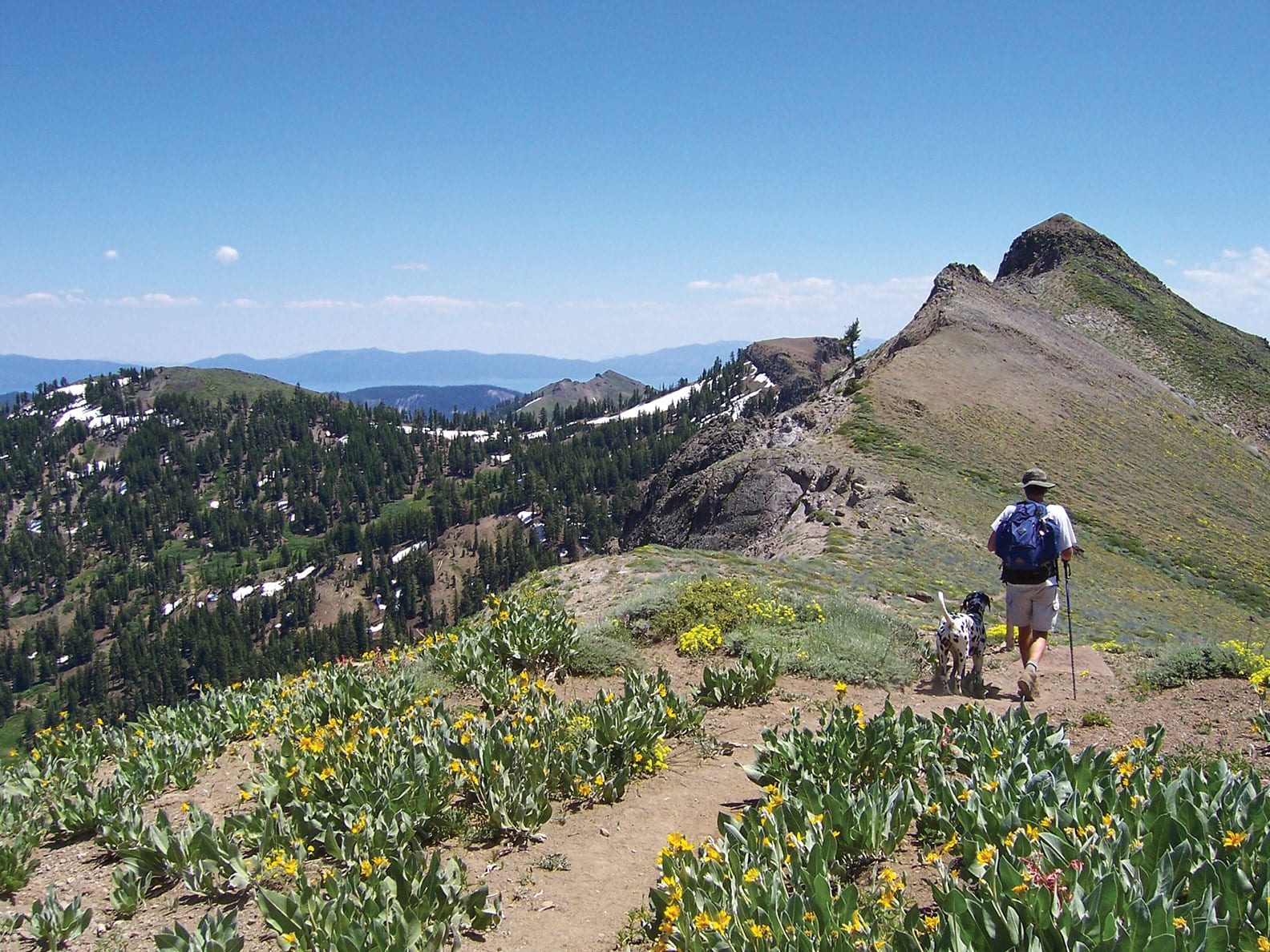 John Read and Burden the dalmatian hike along the Pacific Crest between Sugar Bowl and Squaw Valley, photo by Sylas Wright

The healing powers of altitude, as explained by science, religion and local experts

Earth’s mountains have stood for eons, far outlasting human existence. Perhaps because of their longevity, and the knowledge that can be gleaned from it, the peaks have been sought out by mystics in search of the answers to life’s biggest questions.

But what spiritualists have long intuited, scientists are now beginning to prove: The planet’s highest points have a special power, and spending time there can change the very essence of our being.

From ancient times to present day, experts have studied how to best harness that natural magic, and how to truly live the high life in elevations like Tahoe’s. Professional cyclists climb a hill along the East Shore of Lake Tahoe in the 2017 Amgen Tour of California. Tahoe’s elevation made that stage of the race that much more taxing for the athletes, photo by Sylas Wright

Perhaps the most well-known effect of spending time in high places is altitude sickness—a condition hardly anyone would describe as restorative.

But the unfortunate symptoms are, in fact, a sign of the body’s adjustment to a low-oxygen environment, starting with its mechanism for regulating energy: the digestive system.

“Going into high altitude is a stressor,” says Dr. Lily Kuehne of the Lake Tahoe Wellness Center in Kings Beach. “But we have the ability to adapt to that stress. Your body is able to change behavior and change patterns. Your body is self-regulating. It’s self-healing.”

At elevation, that self-regulation stems from the shifting production levels of key hormones like leptin, which controls the body’s energy stores—and long-term energy schedule—by tabulating how many calories are available, and how many more are needed to maintain normal functions, and is widely credited for the feeling of satiety.

Altitude alerts these chemicals to adjust to less-friendly conditions, kicking the body into high gear and reconfiguring digestive whims accordingly.

Such biological triggers weren’t lost on ancient Indian mystics, who developed the holistic practice of Ayurveda in the foothills of the Himalayas.

The medicinal system has a gut-first approach, stressing the importance of creating inner balance through a balanced diet. To counter the maladies associated with altitude sickness, Ayurvedic teachings recommend foods that are warm and easy on the stomach, such as steamed vegetables, ripe fruits, soupy grains, mild spices and chamomile tea. Indeed, the gut is the true heart of energy flow in the body, and its high-altitude pace is what helps lead to a quicker mountain metabolism.

Numerous studies have linked elevation to weight loss—a result of this biological effect—with subjects starting to shed pounds at just 1,000 feet above sea level. Participants in one study, performed by researchers at the Ludwig-Maximilians University in Munich, Germany, even maintained their slimmer status a month after their weeklong stay in the mountains, showing how powerful an adjustment in altitude makes on the body.

But to get the most out of an increased metabolic rate, diets should keep up accordingly, suggests Kings Beach endurance runner Mike Tebbutt. “In lower altitude, your stomach works better, so you can take in more of your calories at once, and go longer times in between consuming them,” says Tebbutt, who for a brief period in 2015 held the record for fastest unsupported time around the Tahoe Rim Trail, at 54 hours and 17 minutes. “But because at altitude your stomach is working so hard to digest, taking in smaller amounts of food every half-hour, or every hour at most, helps to make sure you do not over-load your stomach.”

Small bites will do, with each mini-meal optimally weighing in around 200 calories, Tebbutt says. Equally as important is not skipping on snacks, or else an elevated metabolic rate could “sneak up on you, and you’ll end up bonking out from lack of nutrition.”

Still, one feeding interval is especially important for athletes training in high altitude: the post-workout.

“Your body recovers best if you get something in right after exercise,” says Truckee resident and cross-country skiing coach Jeff Schloss. “That little window right after you exercise—the first half-hour or hour—is when your body is the most primed to be able to absorb it.” Mike Tebbutt feels the effects of not fueling properly during a hill climb competition at Diamond Peak Resort, photo by Julia Millon

It’s in the Blood

The mountains have a magic that tends to draw visitors back, but even long after leaving, the effects of the high elevation can still be found in their blood.

A 2016 study by AltitudeOmics on athletes trekking the Bolivian Andes found that the subjects’ hemoglobin—the protein responsible for carrying oxygen through the bloodstream—was profoundly impacted after just a few days at altitude. The hemoglobin was altered to cling more tightly to any available oxygen, with the changed cells still coursing through participants’ veins months later, and even helping the subjects re-acclimate more quickly on subsequent visits.

Yet even with the natural boost, maintaining oxygen levels at elevation is taxing—and a primary target of the body’s precious energy.

To help, Kuehne recommends taking a lesson from Mother Earth.

“You want to increase the hemoglobin. That’s the name of the game,” she says. “Anything green has chlorophyll—that’s how plants get nourished—and it helps with the oxygen binding capacity.”

Specifically, she mentions chlorella and spirulina as particularly potent parts of a high-altitude diet. But there’s another way to ensure the blood gets pumping in the peaks, which has been endorsed by mountain dwellers for centuries: yoga.

Also designed in the shadows of the Himalayas, the spiritual practice hinges on the importance of deep breaths and stretching, both of which are key to ensuring good circulation, Kuehne says. Chest openers are particularly helpful at altitude, including asanas like bow pose, camel pose or the simple “cactus arms” stretch, all of which allow for greater lung expansion.

“If you have shallow breath, you’re not going to be able to oxygenate all the cells in your body,” Kuehne says. “And if your body is very, very tense, and you’re trying to pump oxygen to the rest of your body, it’s going to be very difficult. Bringing your body to higher altitude already makes it tense, but when you have that proper rib cage expansion and exhalation, you can properly oxygenate.” Katerina Nash takes a break from a high-elevation workout above Donner Lake with her dogs Lola and Rubi, photo courtesy Katerina Nash

Perhaps the most restorative aspect of altitude is the attention it forces people to pay to their bodies by virtue of the changes it makes them feel. Breathing not only brings those changes into sharp focus, it serves as a reminder to honor them.

“The classic phrase is, ‘Listen to your body,’” Tebbutt says. “If you’re thirsty, drink. If you’re hungry, eat. Respect the altitude and take it slow.”

And the ability of elevation to turn even the mellowest stroll into a moderate workout makes “taking it easy” even easier.

“One thing I really like about altitude is that even going for a walk with the dog turns into a decent workout at the end of the day,” says Truckee resident Katerina Nash, a five-time Olympian in cross-country skiing and mountain biking.

She especially likes bringing her pups around the Tahoe Rim Trail, which Nash says she enjoys equally for its high altitudes and ethereal views.

“For me, training has to be not just a good workout for the muscles, but stimulation for the brain,” she says. “When you can see Lake Tahoe while you work out, you can’t compare that to a gym.”

Bridget Clerkin is a San Diego–based writer who has yet to meet a topic that doesn’t pique her interest. She’s summited mountains on six of the world’s continents, but still adds new adventures to her bucket list daily.