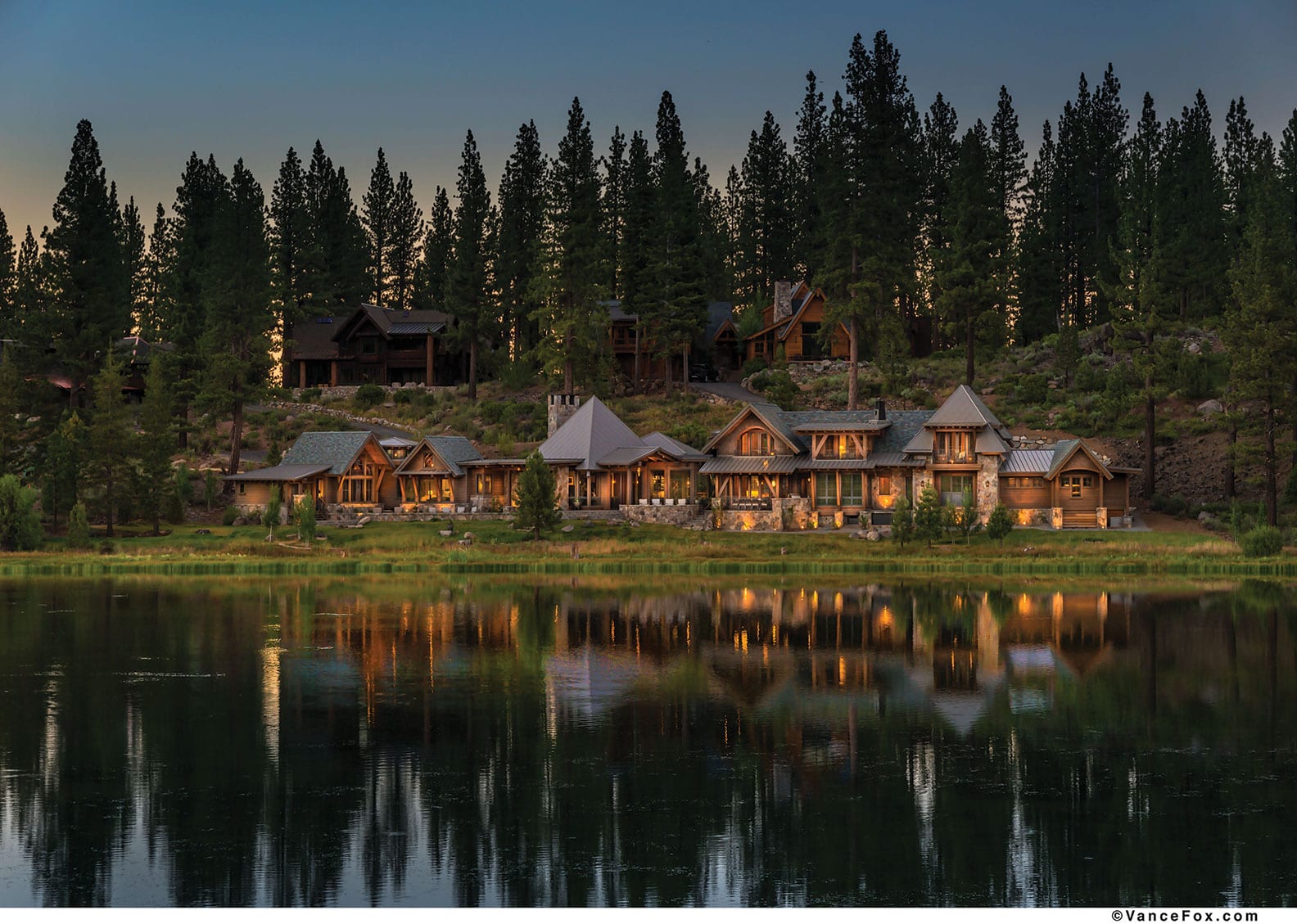 The Lahontan home has an elegant presence along a large swath of shoreline, photo by Vance Fox 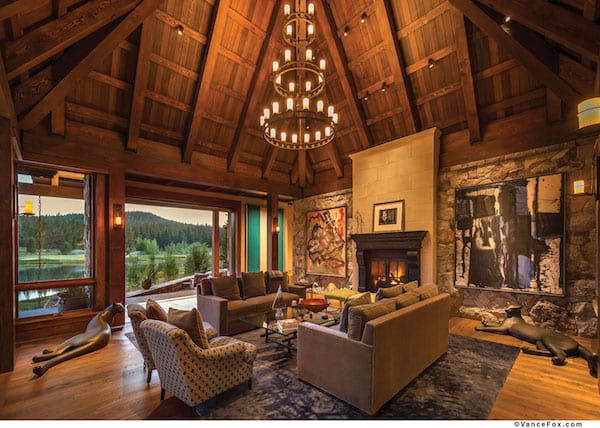 The 25-foot-tall living room opens to views of the lake, golf course and Northstar, photo by Vance Fox

It takes a unique and discerning eye to see potential where others see only impediment. Such is the story with a linear lakefront lot in Lahontan that many others passed on as too restrictive. That is, until Jack Myers, renowned Hawaiian and South San Francisco developer, saw the opportunity to build a masterfully crafted Old World home to contrast with his expansive California abstract art collection.

Stretched out alongside Lahontan’s largest lake, with arresting views of Northstar’s Lookout Mountain and the Lahontan golf greens, the home was meticulously designed by Truckee’s MWA, Inc. Architecture-Engineering to feature lake views across every room, while preserving privacy and moderating the exposure to the strong Sierra sun.

Deep eaves and expertly plotted sight lines showcase the surrounding beauty without giving up a sense of solitude. Framed views of Lookout Mountain appear unexpectedly in even the smallest windows.

The house is unique down to the smallest detail—a testament to Myers’ discerning eye, MWA’s creativity and the skilled craftsmanship of the team of builders from NSM Construction. Window shades recess into walls, heating vents are expertly hidden behind window trim and details like skipping stones scattered across flat roofing add texture to what might have been an otherwise forgotten part of the home. 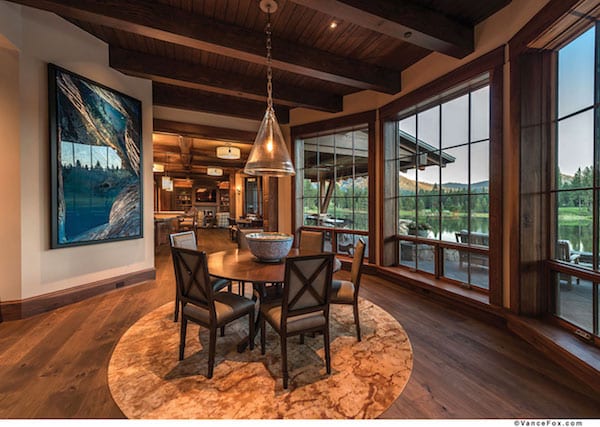 The dining room acts as a hall from the formal living room to the kitchen, photo by Vance Fox

“Some of the parts of this home you look at and say, “Wow, this is a statement,” but other parts are really understated,” says Kurt Reinkens, principal at MWA, who worked closely on the project with MWA’s project manager, Eli Meyer.

Dragon scale–shaped custom metal roof tiles checker portions of the roof, while other sections are clad in multi-color slate. Custom black walnut paneling, engineered to trick the eye to see symmetry from every angle, fits together like an expansive wood puzzle in multiple parts of the house. Detailed coffered ceilings required extensive planning and finishes that matched “down to the millimeter,” says NSM owner Mark Neave.

The long, one-room-shallow layout provides the master wing with extra privacy while making living rooms and dining rooms function as movement corridors—a dual purpose that adds a convivial feel and openness to the home. 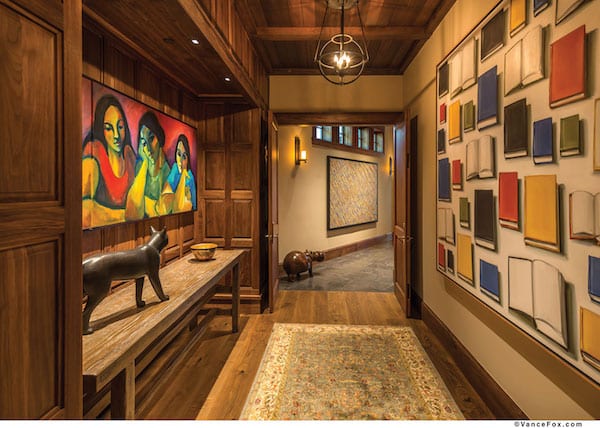 A black walnut–paneled private gallery leads from the master suite to the guest suite and showcases pieces from the owner’s art collection, photo by Vance Fox

At the core of the home is a consistent contrast between Old World finishes and Myers’ magnificent abstract art collection from notable California painters and sculptors—many of them oversized pieces that serve as showstopping focal points of each room.

“When Jack mentioned the modern art collection, I thought he would want modern architecture, but no—he wanted the contrast,” says Reinkens.

Builders crafted true masonry walls around certain art pieces. The walls used natural stone that settles slightly after being set, so they came back in and ground down the natural stone to perfectly fit each art piece, says Neave. “The house really revolves around the artwork,” he adds

But while the art was a focal point of the home all along, Myers did not need the art to drive the architectural decisions. He was confident the art and the architecture would complement each other even in contrast.

“I could take abstract art and put it in Gothic England and it would be fine,” says Myers.

That process of keeping the building design and art separate created a powerful dynamic between art and architecture—each holding their own space and significance within the home. 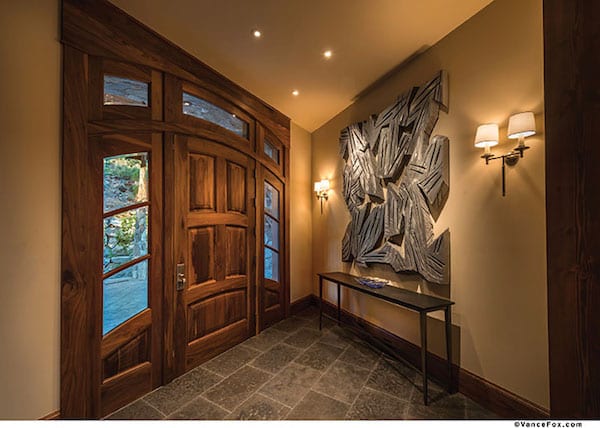 Perhaps chief among these surprises is the walnut-paneled corridor that leads to the master wing. The vibrant reds and blues of a light-washed Sarena Rosenfeld oil portrait of four women almost pulses with vibrancy against the library-like corridor, giving the feel of an intimate private gallery, while leading past the tower and into the master bedroom—now far removed from the goings-on in the rest of the house.

Several of the art pieces come from Hawaiian artists or artists who have been influenced by the islands. Those tropical colors remind Myers and his wife, a seventh-generation Hawaiian, of the place where they lived much of their lives.

“A home without art is no home at all,” says Myers, but then pauses and adds, “This could be the exception because the home is art itself.” 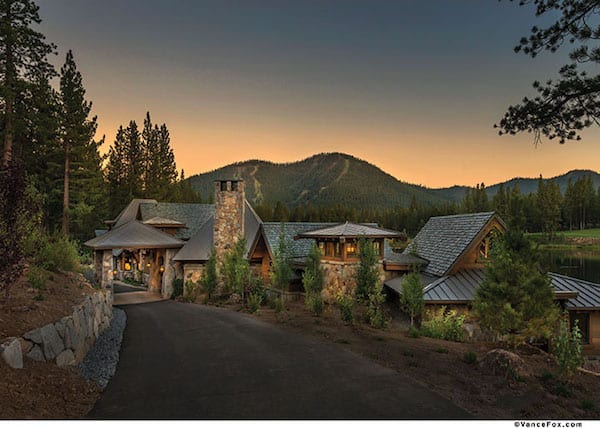 Despite the lot’s lakefront location and dramatic views of Northstar and the Lahontan golf course, most visitors could not get over the long, skinny shape of the site. Because of this, it was passed over time and time again until Myers saw its possibilities.

“Very few people saw the potential in the site until the owner came along. We really built the house for him,” says Neave. “It ended up being stretched out across the lake, which ended up being such a highlight of the house.”

But the lot also did have legitimate challenges. The road runs fairly high above the property, and Reinkens did not want to build a tall home on the site—which would have been the easiest design option. Instead, he brought the driveway in below the street at the ground level, “to speak to the horizontality of the shoreline,” which immediately elevated the roof as a key architectural feature.

“With the road above the house, we knew the roof would be a critical architectural experience for everyone driving by,” says Reinkens. 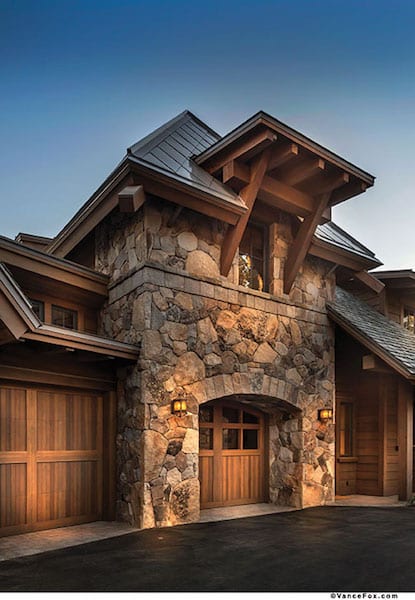 A tower with a second-floor bedroom breaks up the facade of the three-car garage, photo by Vance Fox

The contrasts of custom metal dragon–scale tiling, thick slate and skipping-stone-covered flat roofing creates a mosaic of textures and angles. Four roofing styles—hip, gable, shed and flat—break up the massing of the 7,400-square-foot façade and, along with carefully designed overhangs and visors, draw out the home’s shadows, adding depth and nuance to the exterior.

The position of the house also made the landscaping even more critical. John Pruyn of Truckee’s High West Landscape Architects designed a native landscaping plan to soften the cut walls around the home and blend the lakefront with the lakeside exterior of the home, with an eye for connecting indoor and outdoor spaces.

“The site itself offered up some opportunity to allow the landscaping to integrate the home back into the property,” says Pruyn. “It could have been really stark if the landscape did not soften it.”

Both the construction team and the architects say working with a developer of Myers’ extensive experience made the process much more refined and focused.

For example, Myers traveled to the yard where the home’s stone was sourced with MWA interior designer Morgan Shoemaker and Reinkens to hand-pick each quartz and marble slab that make up the interior of several shower enclosures. The slabs, with magnificent marbling and wild streaks and swirls, are truly exceptional additions to the bathrooms.

“It is an art piece unto itself, but it is nature’s,” says Reinkens.

Neave says working with someone like Myers, who understood construction timelines and had his own vision for the home, was critical for the final outcome. 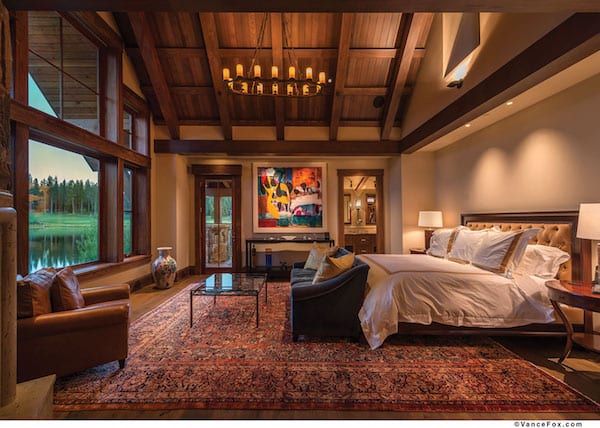 The master bedroom with its vaulted wood ceiling was strategically angled to take advantage of the mountain view, photo by Vance Fox

“He understood the complexities of building a home of that stature,” says Neave. “On a project like that you can’t just have one creator. It is the product of a brain trust of people. What you are seeing is the result of an alchemy of people coming together with a common goal.”

That team of creators was rewarded with one of the most coveted recognitions for their work upon completion of the project. The National Association of Homebuilders gave the home its national Best in American Living award in 2017, a testament to the supreme level of craftsmanship, creativity and detail that went into the project.