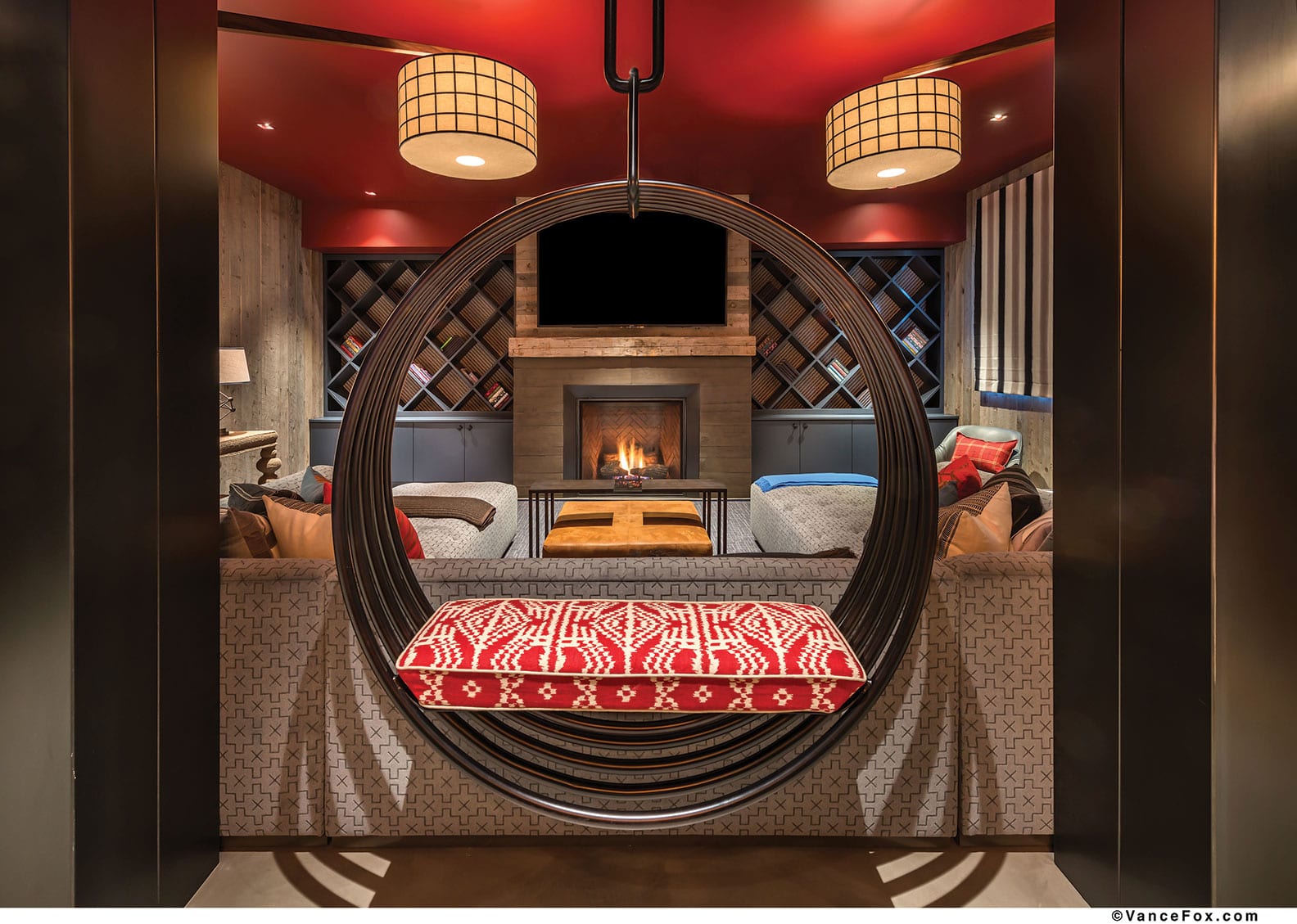 A circular metal swing is among the features in the home’s combined bar, game room and media area, photo by Vance Fox

Built to be Bold

In 2014, San Francisco architect Steve Geiszler sat down with a Bay Area client he’d collaborated with on two previous projects in the city to discuss the client’s Martis Camp lot.

“We were working this out together,” Geiszler says. “We went through the programming [how many bedrooms, bathrooms, etc.], but then we got into, ‘How do you want this to feel?’” 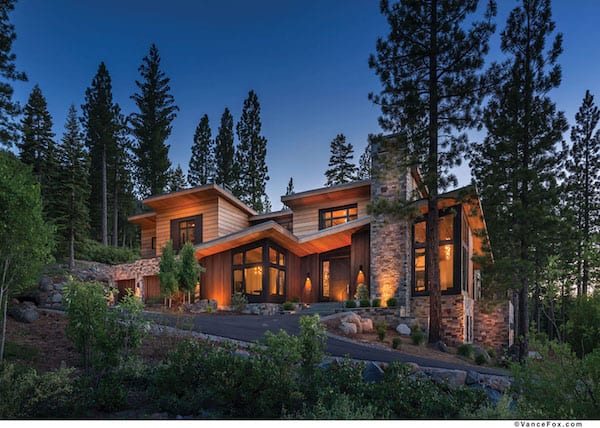 The upslanting butterfly roofline allows the home to capture panoramic views of the surrounding mountains, photo by Vance Fox

The homeowner said, “Be bold.”

Thus, “bold” became the driving force of the project.

“When we were looking at different design options, that would inform us,” Geiszler says. “What was more interesting—what was bolder?”

On the exterior, a butterfly roof design creates a bold, sweeping statement. The rooflines rise in opposite directions, which results in stunning views of the surrounding mountains from throughout the interior: Mt. Rose to the northeast, Castle Peak to the northwest. “Both those roofs slope up to capture those entire ranges,” Geiszler says.

Stepping inside, the home’s centerpiece is a three-story metal staircase.

Created by Reno’s Twisted Metal, which did much of the decorative metalwork in the home, the staircase was a huge process that took close to eight weeks to construct, according to builder Matt Heslin of Truckee’s Heslin Construction.

“It was a labor-intensive element of the home, but it’s a lot of eye candy when you walk through this giant front door and, boom, you see the stairs,” Heslin says. 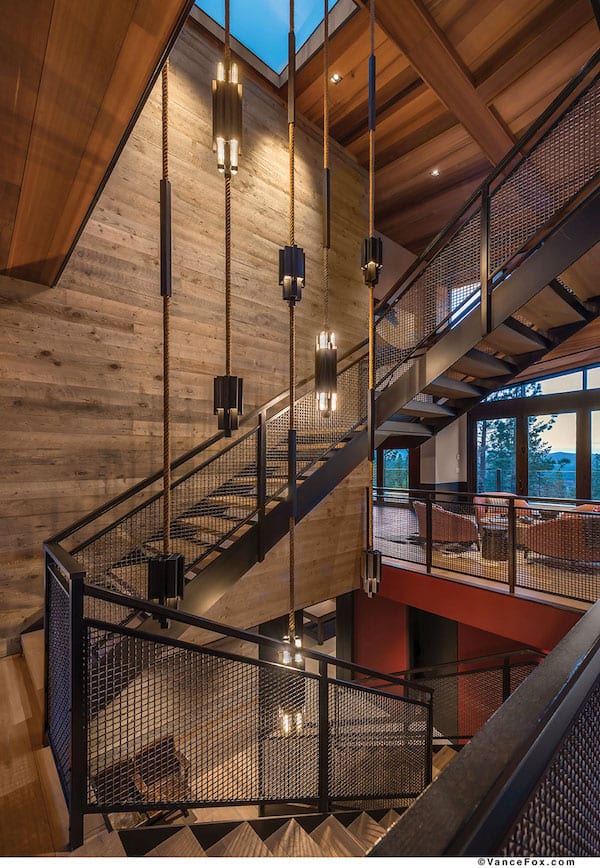 The staircase took close to eight weeks to complete and is complemented by a fixture by interior designer Jay Jeffers, photo by Vance Fox

Five light fixtures made of blackened steel and rope by San Francisco–based interior designer Jay Jeffers are suspended in the stairwell, which is topped by twin skylights that let natural light filter down all three stories. It also connects the floors, allowing views both up and down.

“Because it’s in the center and viewed from many rooms, it feels like a sculpture rather than an average staircase,” Geiszler says.

The main floor comprises public spaces and gathering places, as well as playroom, mudroom and sauna. Artfully arranged gathering areas bring a sense of intimacy to the voluminous spaces, while European white oak floors, wood ceilings, abundant artwork and texture—like the wallpapered playroom or the textured tile in a powder room—add warmth throughout.

“This home represents a fresh interpretation of mountain style with industrial modern elements,” Jeffers says. “The project reflects a delicate balance of masculine and feminine.”

The areas are sectioned, though mostly open to one another—the living room seating areas transition into a more formal dining area, overhung by a funky, five-light chandelier, which leads into both the cozy TV room and the kitchen.

“There are lots of little areas in a very large home,” Heslin says.

In the kitchen, the bold, industrial feel becomes more pronounced. Concrete countertops play against the dramatic steel range hood. A long concrete island is topped by Lumifer horizontal pendant lighting, adding a touch of whimsy, and set with six barstools, while nearby, dark steel-clad doors disguise the fridge and freezer and push open into the hidden pantry. 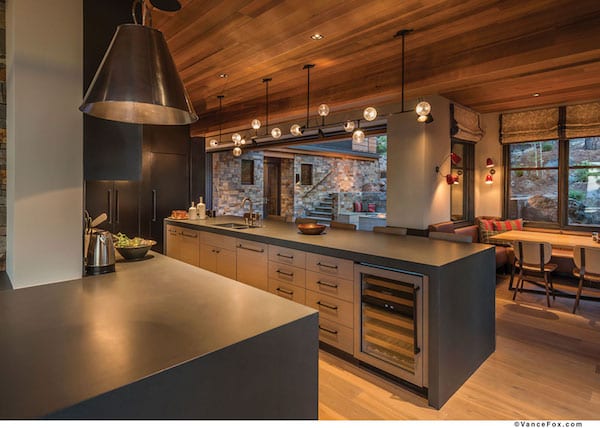 “The whole kitchen is steel,” Heslin says, estimating that the home contains about three times as much steel as a similarly sized home.

An informal breakfast nook is set nearby, as are floor-to-ceiling pocket doors that slide open to a patio, complete with soothing streamscape.

The landscape is an important factor of the home, which is set on one of Martis’ few ski-in, ski-out properties.

“If you look straight up that hill, that’s the ski slope,” Geiszler says. “You can ski off the slope to the back patio.”

A ski rack on the patio accommodates those coming off the hill, as do the lockers in the mudroom and the nearby sauna, all easily accessible from the back of the home.

The steep site necessitated the home’s three-story floor plan. Venturing down to the first floor, bright and funky antelope artwork awaits at the bottom of the stairs. Two bedrooms are on this lower level, as is the combined bar, game room and media area.

“It’s a room that can encompass a lot of different activities—ping-pong, the bar with the wine cellar, the big theater; it’s a room that’s supposed to be a little more informal in its use and can handle noise because it’s tucked away from the other living areas,” Geiszler says. “It’s a little more fun, and that drove the materials and the finishes.” 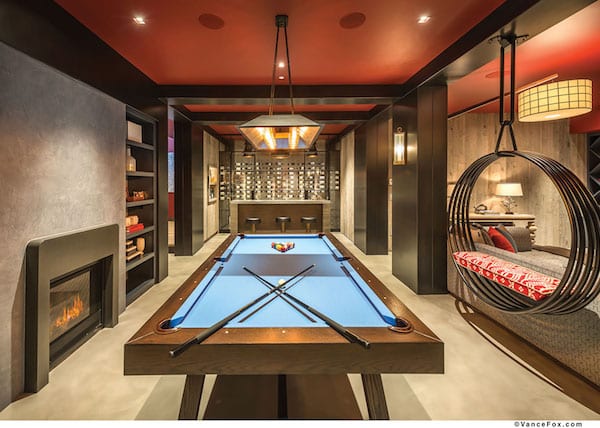 The lower level’s wine bar and pool table (which converts to a ping-pong table) are meant for play and relaxation, photo by Vance Fox

The “bold” theme is obvious here. The ceiling is painted a shade of red that stands out against the concrete flooring and structural steel.

“I have to give props to the interior designer,” Heslin says. “It’s not your typical Martis Camp designer—they are super high-end, but they definitely do things differently. When they had us paint it red, I thought, really?”

Once completed, though, Heslin changed his mind. “The red color goes with the raw steel. It actually looks great.”

It also complements the industrial feel of the wine cellar, which is set off by glass behind the bar. The racks were hand-welded on site by Twisted Metal and the three large pendants over the bar are by Viya Home.

“On the lower level, we were inspired to create a space that has something to offer for the whole family,” Jeffers says. “The dashing red paint, full bar, screening room and vast sectional sofa makes it so there is really no reason to leave home.”

The flooring is concrete with a micro topping done by Verdi’s Evolution Industries. “They fill every imperfection, which gives it this marbling,” Heslin says. “It came out beautifully.” 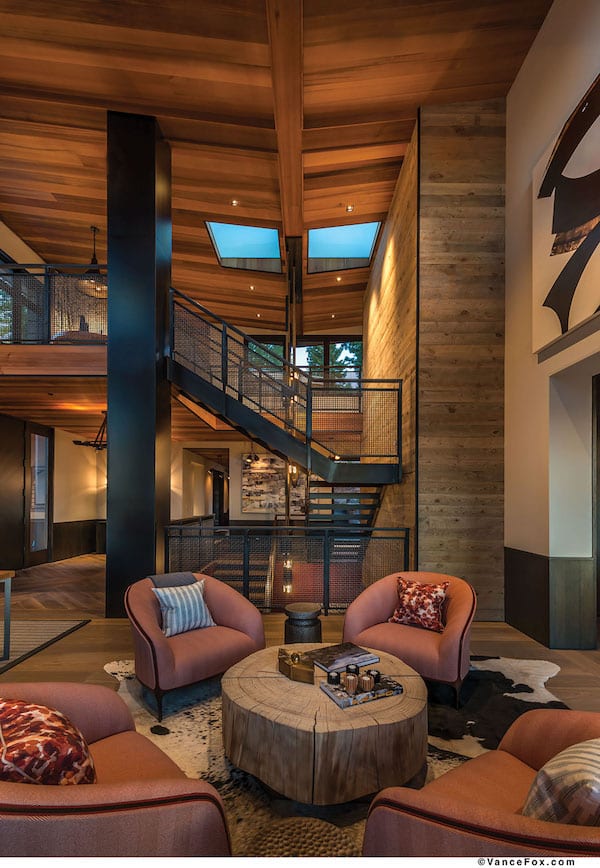 Skylights above the steel staircase mean that natural light filters down through all three levels, photo by Vance Fox

A conversion top allows the pool table to transform into a ping-pong table. In the theater, a U-shaped sofa faces the diagonal built-in bookshelves, fireplace created by Jimmy Hazel of Clastic Designs and flat-screen TV. Large steel-clad beams frame the spaces, as does the circular metal swing that backs the sofa.

On the top floor, a hallway with built-in bookshelves and window seating leads to the two bunk rooms. They are practically identical, each with three sets of bunks and their own bathrooms, yet also slightly different: In the bathrooms, for example, one has green and white striped subway tile and green accents while the second has blue and white striped subway tile and blue accents.

In the master bedroom, huge windows take in the views all the way to Castle Peak in the distance. A steel-and-glass wall blocks off the tub and shower, adding to the rustic industrial feel.

Perhaps the most interesting feature of the third floor is the study. Here, floor-to-ceiling bookshelves line several walls, leaving space for a fireplace, cozy seating area and wide views to Northstar’s ski slopes beyond. A certain book is equipped with a magnet that, when pulled at a 45-degree angle, engages a secret lock and opens the doors within the bookshelf to reveal a hidden office.

“It was super challenging,” Heslin says. “These aren’t things people do every day.”

Geiszler acknowledges the effort, but adds, “It was easy to put on paper.”

Concealing the office was important because, if the husband was working—which he often does at the Martis Camp home—he didn’t want to have to worry about leaving a mess lying around. At the same time, when he works, he can leave the secret doors open, creating a direct line of vision from his desk to the wide windows on the far side of the study. 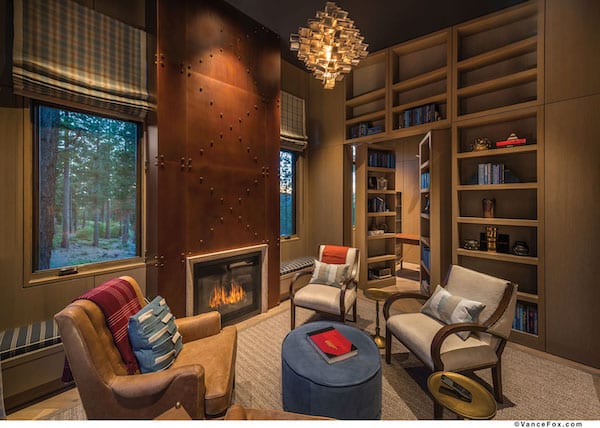 A secret door in the study reveals a hidden office, photo by Vance Fox

“So when he’s working he has a view of the ski slopes,” Geiszler adds.

Most homeowners would have chosen to locate an office behind a door. But as far as choices go, a simple door isn’t nearly as interesting as a concealed entryway activated by a secret book. And, as with many of the design features with the house, it certainly isn’t as bold.