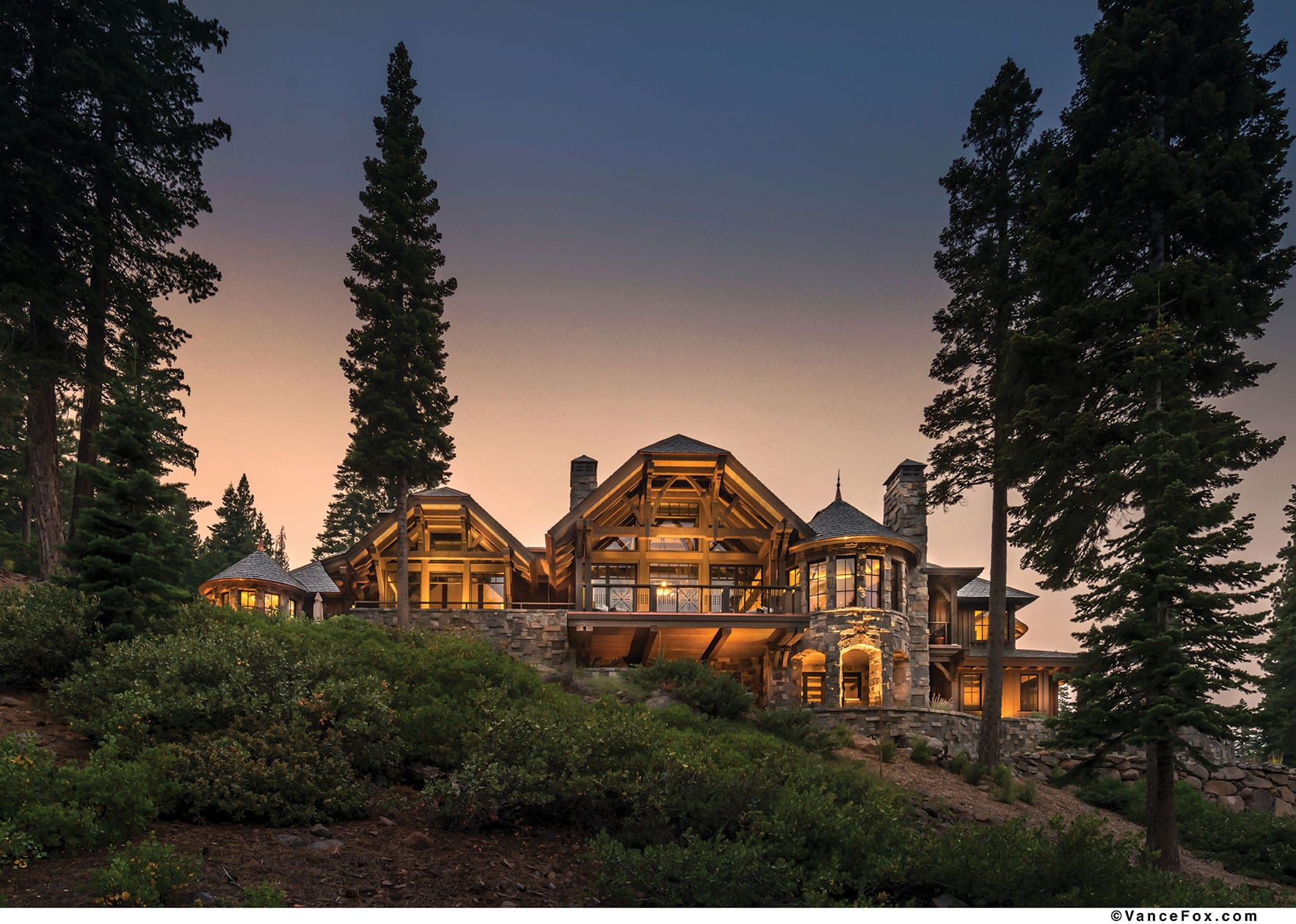 The home nestles into the hillside, giving the appearance of being smaller than its nearly 8,000 square feet, photo by Vance Fox

European-influenced architecture meets a California lifestyle in this legacy estate

Ten years ago, with blueprints drawn and the first two buildings recently completed, a Carmel-based homeowner was getting ready to begin construction on his Martis Camp estate.

“We had it all designed back in 2008,” he says. “We were getting ready to break ground on the main house; that’s when the world fell apart.” 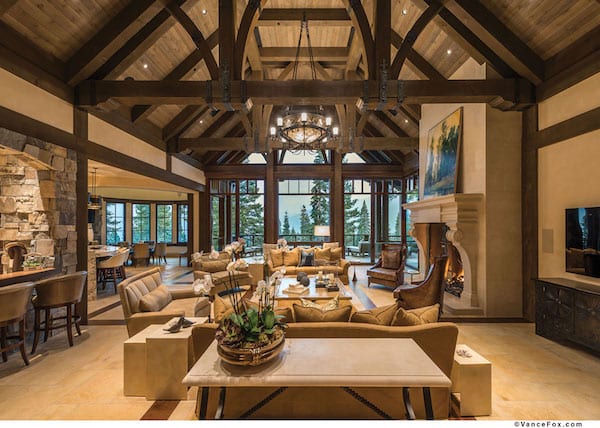 The size of the great room made it necessary to break up the room into cozier seating sections, almost as if in a hotel lobby rather than a house, photo by Vance Fox

He and his wife chose to wait (“We used our better judgment,” he says, then laughs and adds, “It would have cost half to build then than now”). Eight years later, once the economy had mostly righted itself, they decided the time was right to restart the project.

The owner is a general contractor and developer with decades of construction experience and, as a result, a very clear vision of what he wanted. He worked with architects Donald Fugina and Kevin Bryan of the Sacramento firm Donald Joseph Inc., with whom he’d collaborated on previous developments. A decade earlier, the firm designed a grand plan for the large hillside property, overseeing the construction first of a guesthouse, then an entertainment pavilion.

“When we picked the project up almost 10 years later, they loved the original main house design,” Bryan says. “They said, ‘It’s as good today as it was 10 years ago.’”

The owner was one of Martis Camp’s originals. He purchased a site on a hillside that backs to protected land, making the 5.5-acre site feel even larger. However, the site itself was not an easy one, and the team enlisted Truckee’s NSM Construction for the build.

“It was a very, very rocky site,” says NSM owner Mark Neave, who credits his entire team for their hard work on the project. “It’s basically a huge rock outcropping.”

Rock excavated from the site was used to construct retaining walls for the home and the 750-foot-long driveway. The extended driveway creates a sense of procession: From high atop the ridgeline, which showcases the site’s breathtaking views, it passes first the guesthouse, then the pavilion and culminates in the grand home, which seems smaller than it is upon approach. “For a huge mass, it’s been really well designed to nestle into the landscape,” Neave says of the nearly 8,000-square-foot home. 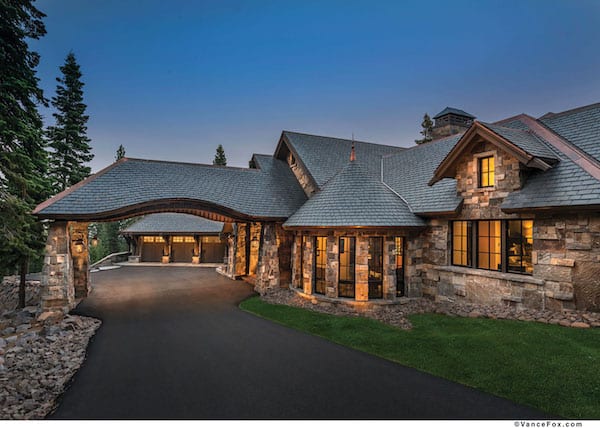 The porte cochere is framed by continually burning natural gas lanterns by New Orleans company Bevolo. The main entry is a 12-foot-tall iron door that weighs at least 1,000 pounds and leads into the lavish great room.

The home itself draws inspiration from Scandinavian and northern European architecture. “It has many more classic forms and elements than you may see in Martis Camp,” Fugina says. “This house has a more focused entry, and an asymmetrical but balanced sense to it.”

The home is reminiscent of early Lake Tahoe architecture like Vikingsholm. “But then again,” Fugina adds, “it’s bridged with a sense of California lifestyle.”

Walking into the great room, the European influence is obvious. Giant old-growth lumber, which the owner traveled to Montana to personally choose, became the beams that span this immense space. The granite comes from the same Montana quarry where rock was harvested for the guesthouse and pavilion. Hand-applied Venetian plaster decorates the walls while old, 12-inch-thick oak flooring from France complements stone tile flooring out of Turkey. “We sourced materials that played to what we were trying to create,” the owner says.

The fireplace, clad in French limestone, is large enough for a person to walk into—necessary for the scale of the room—yet it was an enormous effort to get the proper permitting and approvals from the county. Bryan credits both NSM’s perseverance and the client’s vision, saying they “just about went to the ends of the earth to get that fireplace.” 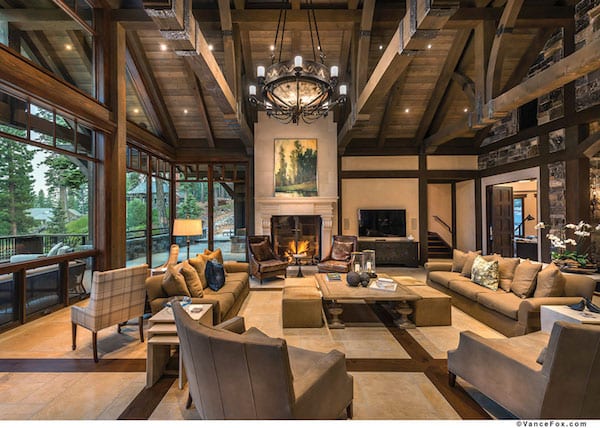 The French limestone fireplace is tall enough for a person to walk into—and required many different permits and approvals, photo by Vance Fox

The nearby kitchen features a dramatic iron and copper hood paired with stained and glazed knotty alder cabinetry. Enormous granite slabs that create the island countertop and pillars are supported by hidden steel; barstools provide an informal dining option here, or at the six-person table set under the kitchen’s domed ceiling, where tall windows in the rounded walls provide views of the forest beyond.

Donald Joseph not only did the design, but also the interior architecture, much of the material selections and the soft goods, such as furniture and window coverings. “It’s a seamless integration of architecture with the interior design,” Bryan says.

In the great room, these materials and the cozy seating areas create an Old World impression, but it’s the openness of the spaces and the huge amounts of glass—to include foldaway doors to the outdoor terraces—that address the modern desire for the indoor-outdoor lifestyle. 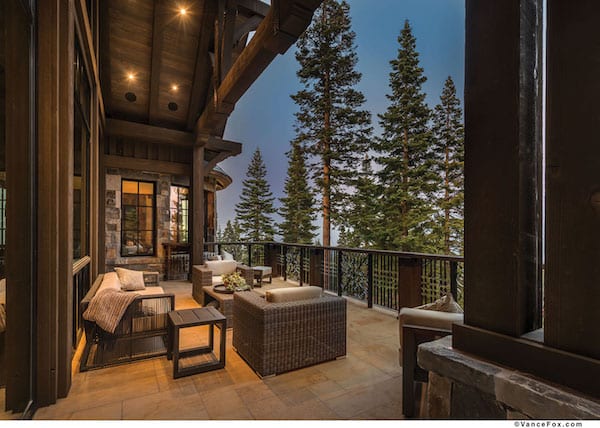 Indoor-outdoor living is one way the team brought a modern sensibility to an Old World design, photo by Vance Fox

Not only that, but hidden, concert-level sound systems and concealed mechanical and lighting systems assure that this home is modern in every technical aspect.

“This is a legacy home,” Bryan says. “They plan to keep this in the family for generations. The goal was to create a truly timeless home that looks like it could have been there for 100 years, but also had every twenty-first century modern convenience.”

Set in a rotunda off the great room is the owner’s office. The circular flooring depicts a beautiful compass rose, the directions oriented to the proper degree. The compass itself was laser-cut and shipped to the site; it’s a nod to the owner’s military and aviation background. It’s a reminder, he says, not to go in circles, but to have a direction in life and follow that direction.

It’s also one of the home’s showstoppers. Yet another is in the master bathroom, where honey onyx countertops, book-matched so the slabs align, keep the room feeling light and bright. Here, a 36,000-pound bathtub was originally a single piece of Italian marble, which was carved and polished and now holds between 500 and 600 gallons of water.

Set under the bathroom’s rotunda, the tub took nine months to create and arrive, at which point much of the framing on the round walls was already done. 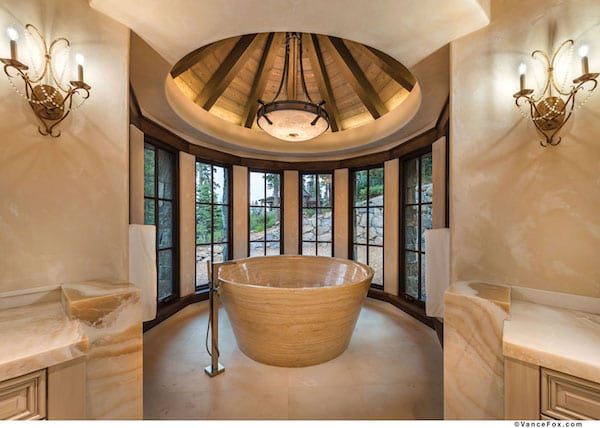 This bathtub was carved from a single piece of Italian marble, photo by Vance Fox

“To get it in there, we had to take out some windows and change some framework,” Neave says. The team craned it outside of the bathroom, then rigged up a dolly system to get it indoors. “It was a monumental effort,” he adds.

“I’ve been in the industry a long time,” the owner says. “When you go to new construction, hopefully there’s one item that makes that home stand out. Very rarely would you ever find two or three of those features in a house.”

And yet, the compass rose flooring and the tub both pale to the home’s magnificent formal dining room.

A cantilevered design allows glassed-in wine walls on either side of the eight-person table to extend from the floor below and rise two stories.

“That was sort of the signature of the house and what a lot of guests take away as the ‘wow’ experience,” Bryan says. “That was one area where we dialed it up to an 11.”

A stairwell is located adjacent to provide more views into this feat of engineering. On the floor below, a temperature-controlled wine room contains a tasting area and a 3,000-bottle storage capacity. 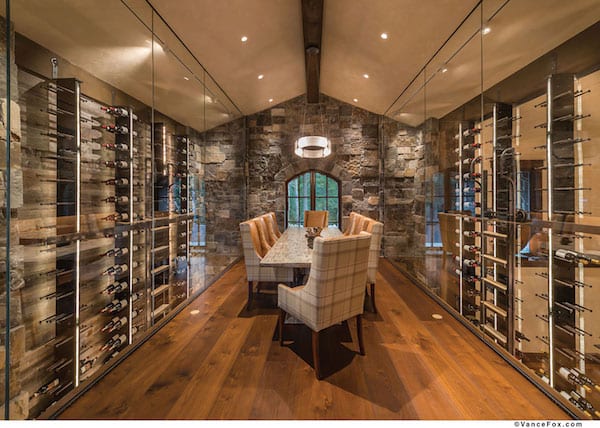 The cantilevered formal dining room is framed by 22-foot-high wine walls that rise from the floor below, photo by Vance Fox

Stocked with bottles like Quintessa, Ruffina and DuMOL, plus the occasional magnum-size bottle of Insignia or Caymus, the wine cellar and the above dining room are a wine lover’s dream (one TQ tour member walked into the cellar and said, “I hear angels singing.”).

Even as the team conceived the design, they didn’t know if it was feasible. “I didn’t know they made glass almost 22 feet high,” the owner says. Reno’s nvision Glass created the panels, each of which “took 15 guys” to lift, the owner adds.

The metal wine racks were hand-forged by metalworker Steve Lopes out of Washington. Two-story-high ladders, which reach the uppermost bottles, were specially designed with wine corks in the treads. Track lighting is recessed into the sheetrock ceiling while the mechanical systems are concealed into what look like solid wood beams. “It took an extraordinary amount of effort to properly cool a two-story wine vault,” Bryan says.

This basement level—which also houses the wife’s pottery room, additional bedrooms, a terrace with a fireplace and outdoor TV, and the lower three-car garage—is possible because of the home’s hillside location.

“Essentially, the main home is falling down a ridge, which was just a big tumble of boulders,” Bryan says. Donald Joseph took advantage of that fall to create the basement level as well as a two-level garage. “There’s a garage on the main upper floor for everyday use and, in the space below it, another garage you wind around to for toys and lesser-used vehicles.” 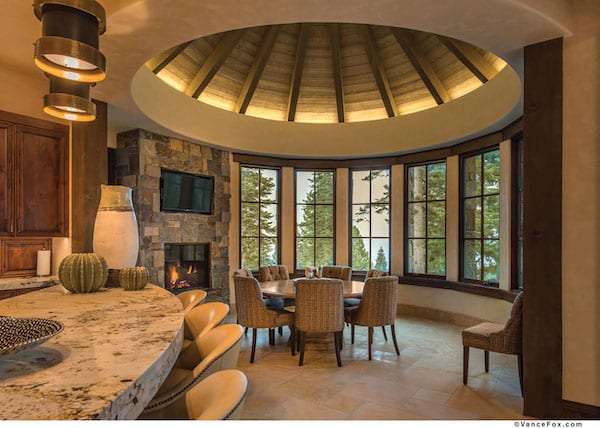 A domed ceiling tops one of the dining areas, photo by Vance Fox

Construction took almost two years. Besides the fact of the home’s size and the challenge of its location, the home includes 115 expanses of steel. “It took a very long time just to get the steel erection done,” the owner says.

The owner remained involved throughout the entire process—to the point of driving tractors and digging trenches—often living in the guesthouse while the main house was under construction.

“He had a very clear vision of what he wanted to create,” Neave says.

Indeed, the entire home succeeds because of a stunning design—which survived eight years on the shelf with barely any changes—dedicated craftsmanship, superior materials, and a design and build team that believed in the vision. It’s a testament to the owner’s belief—etched in his office floor—in the importance of having a direction and following it.