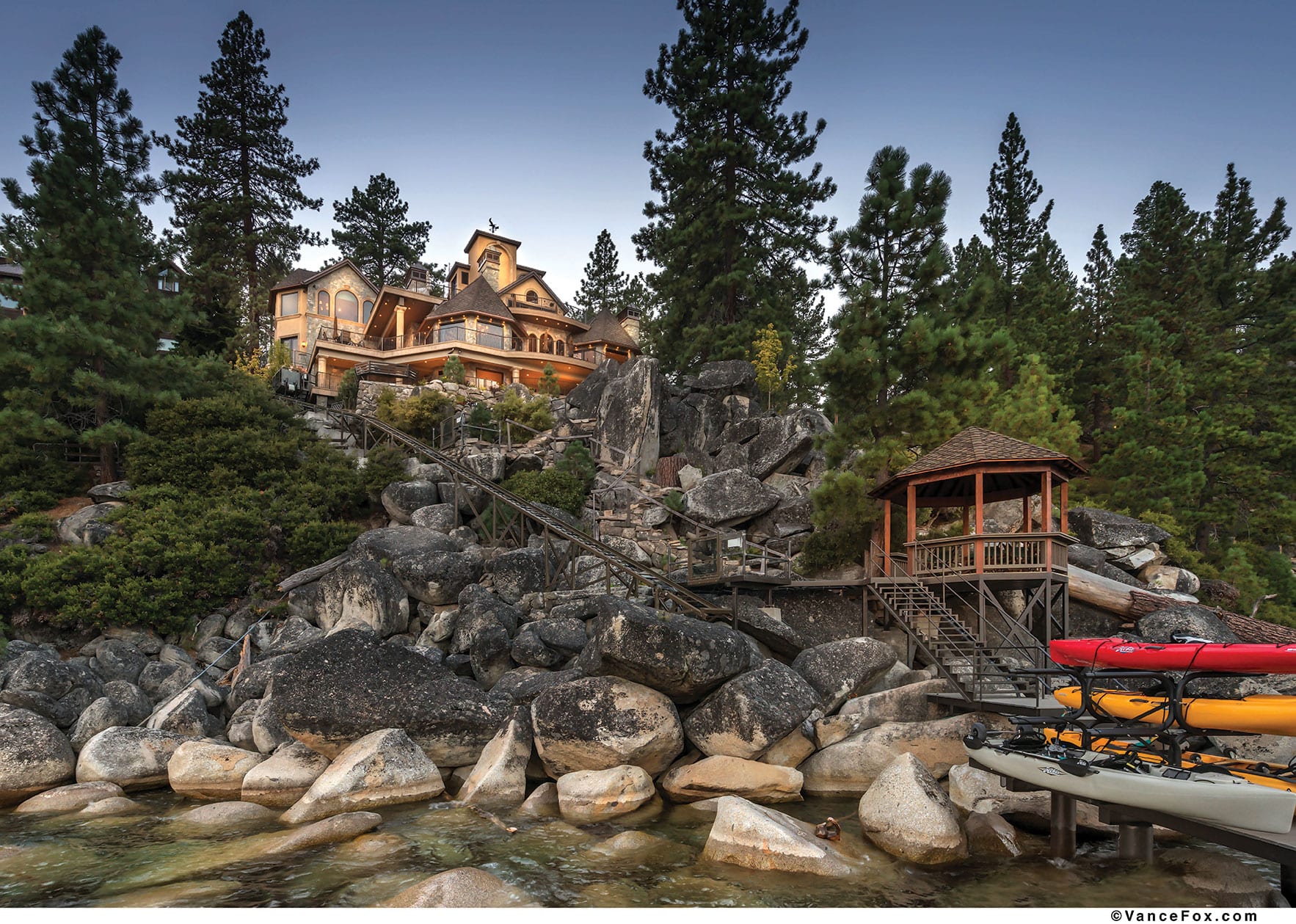 The 9,000-square-foot home includes a tram-like cable car that provides quick access to a lakefront gazebo and dock, photo by Vance Fox

Certain slivers of geography attract residents who transform that land into lore. Ranking among those larger-than-life landscapes like Big Sur and Laurel Canyon is a boulder-studded section of Crystal Bay shoreline that for years served as the Rat Pack’s playground and a retreat for luminaries like eccentric billionaire Howard Hughes. 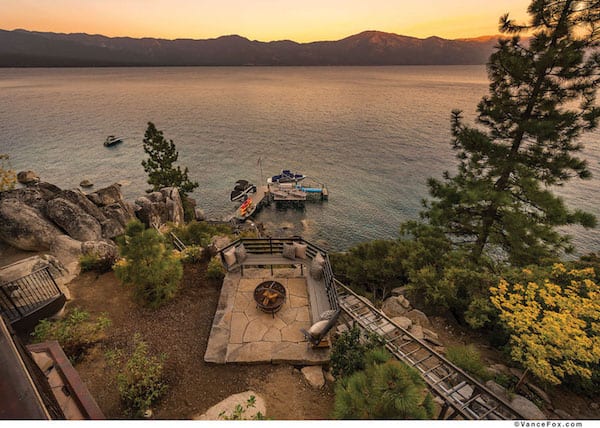 Sprawling views of Lake Tahoe abound from every level of the home, photo by Vance Fox

Three years ago Stan and Penny Boney felt the same pull that brought Sinatra, Hughes and others to this quiet corner of Tahoe—the seclusion, the sunrise-washed slopes, the aquamarine hues of Tahoe’s limpid waters.

They settled on an expansive lot with sweeping views of the lake and an east-facing orientation that illuminates the granite boulders in the soft yellows and oranges of daybreak each morning. The lot also offers rare seclusion on a section of shoreline only steps away from the historic Cal Neva Resort & Casino once owned by famed Rat Pack member Frank Sinatra.

“Many of the lots around the lake are pie-shaped, so when you look down to the lake you see the neighbor’s house and you think it might be your house,” says Penny Boney. “There is privacy here.”

While the lot was absolutely stunning, the home on the property was a jumble of styles and a maze of add-ons. Penny, recognizing the amount of work the property would require, wasn’t sold. 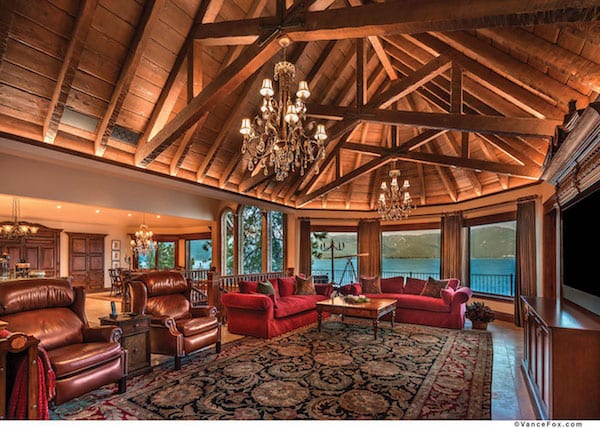 The home was built around the original cabin from the 1930s, which was preserved as the living room, photo by Vance Fox

Despite the home’s mishmash of architecture and finishes, at its core rested a hidden gem that the Boneys decided to preserve and build around. An original 1930s cabin, with ceiling stylings similar to the famed Thunderbird Lodge on Tahoe’s East Shore, became the centerpiece of the design and re-build. Meanwhile, much of the home’s original rambling labyrinth of rooms and hallways were torn down and rebuilt.

The Boneys, successful natural food entrepreneurs who built and sold grocery stores including Sprouts and Windmill Farms, engaged White Sierra Construction for the demanding remodel. White Sierra, known for building immense lakefront homes on Tahoe, meticulously crafted what would surround the original 1930s timber ceiling, building a 9,000-square-foot, five-story home that cascades down the granite boulders toward the shoreline of the lake.

Along the way the Boneys’ familiarity with building a landmark family home, and their experiences in snow country, guided the process. The couple had already been through the detailed process of fully remodeling their San Diego home into a hilltop Tuscan Villa and had traveled the Sierra Nevada for numerous winters as their son ski raced competitively. Together they tackled the new challenge, each bringing their unique vision to the home. 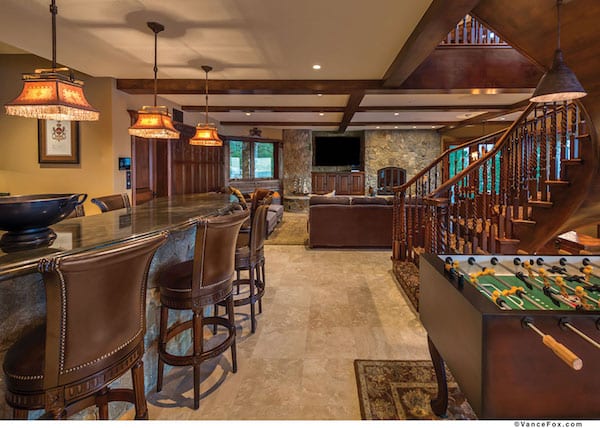 Much of the home’s activity occurs on the first floor, which includes a recreation area at the base of the custom spiral staircase, photo by Vance Fox

“Stan is very much function, and I am form,” says Penny.

But even with the close collaboration, White Sierra Construction encountered a series of challenges that required an extra dose of creativity and determination. First of all, the topography of the site turned even the most routine construction tasks into complex logistical feats. Large granite boulders drop precipitously to the lake, creating a hazardous journey for all the building material on site.

At first, White Sierra Construction managing partner Chris Michael considered ferrying windows and other bulky, but delicate, building material to the site by boat. But then he fabricated his own steel framework that allowed the construction crane to lower windows, doors, countertops, refrigerators, furniture and even deck pavers to the site.

Within the home, the construction crew found even more challenges. The team had decided to increase the ceiling height of the bottom floor, but found solid granite bedrock below the home. Instead of giving up on the preferred ceiling heights, the team jackhammered granite for days to get the desired layout.

The mix of logistical challenges and fine finish details required ingenuity—a process that was both immensely challenging and intensely rewarding. 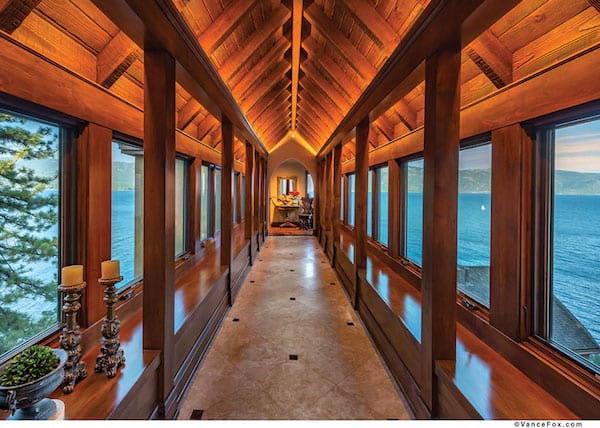 The entry corridor bridges the steep, rocky topography of the site, photo by Vance Fox

“Basically, the house consumes you,” says Michael. “You wake up at three in the morning thinking about it. You become part of the house.”

The home was finally complete in 2018, a structure influenced by the architecture of a Scottish hunting lodge, using natural stone to ground it within its granite backdrop. Two elevators ferry residents and guests from floor to floor. A funicular—a tram-like cable car—provides quick access to the home’s lakefront gazebo, deep-water dock and beach.

Within the home are intricate details and touches that connect to the Boneys’ past and personal journey. The intricate African Acacia flooring on the main level, for instance, was patterned after the Grand Del Mar Hotel in San Diego.

Appropriately, the centerpiece of the home is the tiny cabin that stood when Rat Pack members were carousing the shoreline decades ago. The crisscrossed pattern of the original 1930s Douglas fir ceiling is first seen in the corridor-like entryway where it is artfully washed by recessed lighting, and then again in the original cabin ceiling preserved as the home’s living room.

The ceiling’s styling and structure is classic Tahoe, resembling the Frederic DeLongchamps design in the Thunderbird Lodge, as well as Julia Morgan–designed Tahoe estates.

The amber of the timbered ceilings contrast crisply with the deep blue of Lake Tahoe, which splays out in front of the property in panoramic views that stretch from Incline Village to South Lake Tahoe. 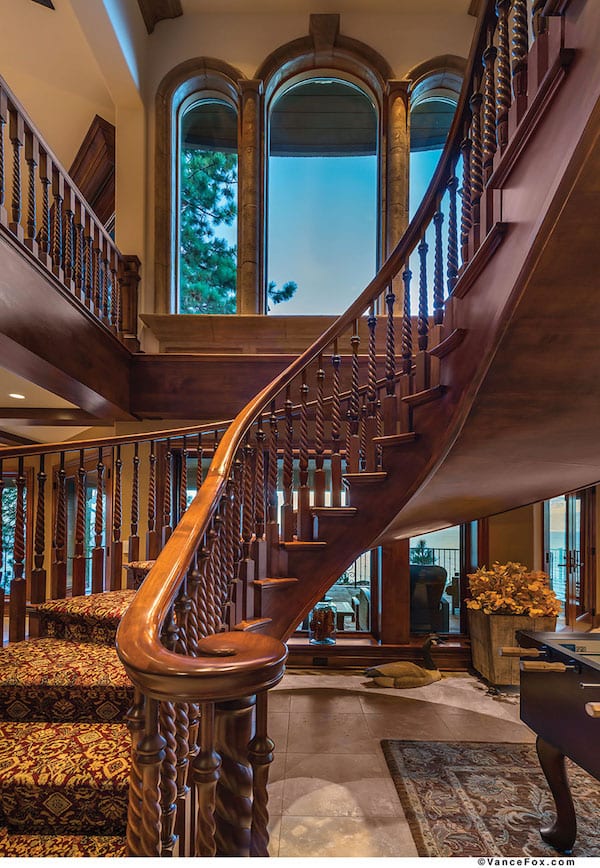 A freestanding spiral staircase is among the highlight features executed by White Sierra Construction, photo by Vance Fox

The entry corridor, bridging the rocky and steep topography of the site more than 30 feet above, is filled with lakeview windows on each side, giving the perception of nearly floating over the lake while entering the home.

Below the garage is a separate guest apartment tucked into the hillside. The elevator leads to a study and sitting room with a private deck on the third floor. The second story holds the living room, kitchen and main decks overlooking the lake.

The master bedroom and bath are separated from the main goings-on of the home, retaining their own private deck.

But much of the home’s activity occurs down the custom spiral staircase, on the first floor. A 16-seat theater, bar, wine cellar, recreation area and steam room occupy the bottom floor, seamlessly connected to a deck and the funicular that leads to the lake.

The Boneys decided to add the steam room when they stayed at Martis Camp during the home’s construction, and the spa became a popular gathering place.

“It becomes an Airbnb in the summer,” Penny says jokingly of the stream of friends and family who congregate in the warmer months.

While the Boneys didn’t purchase the property for its proximity to history, they seem to have naturally assumed the spirit that inhabits this portion of Lake Tahoe’s shoreline.

Just as friends and family flock to the lodge-like warmth of this Tahoe landmark each summer, Penny sometimes thinks about the history of good times this shoreline has seen.

“I can imagine Sinatra and his friends sitting on that dock right there,” she says, looking down to a wooden pier that neighbors the property. 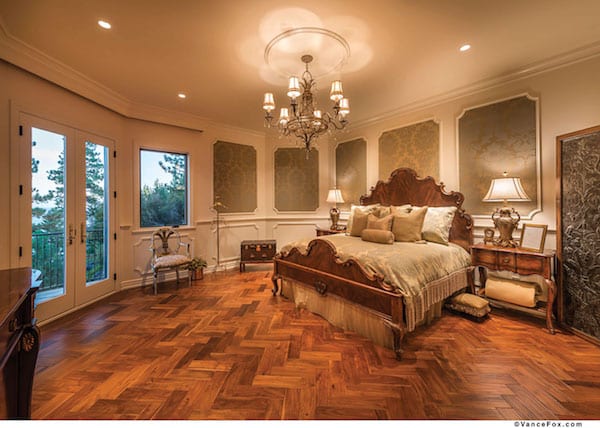 The master suite is separate from the main areas of the home and includes its own private deck, photo by Vance Fox

Despite his fame, Sinatra probably enjoyed this view and this shoreline in much the same way the Boneys do today, marveling at the watercolor wash of sunrise, or gazing at the moon reflected in the lake’s glassy calm. Perhaps humming the bars to an unfamiliar song that would one day become a standard, inspired by the tranquility of one of the world’s most majestic views.