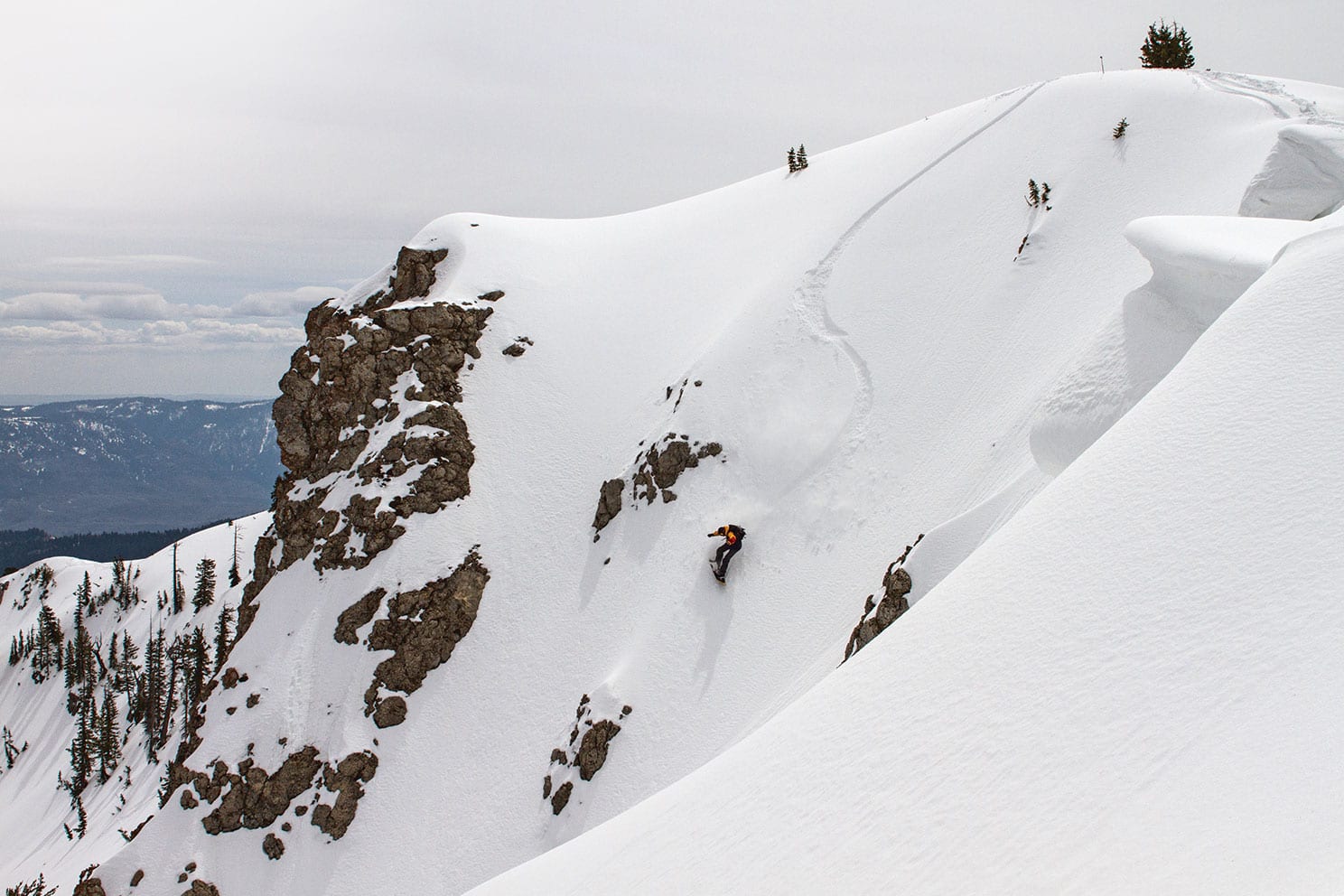 The sensibly bizarre sport of powsurfing gains traction in Tahoe

“You are high, dude. That’s the dumbest thing you could buy in this whole store.”

Those were the words of Steve Woerz—aka “Steezy Steve”—spoken to his good friend Ben Paciotti in a Washington surf shop around 2011. The “thing” was a powsurfer, essentially a wide, binding-less snowboard built for powder.

Paciotti was not to be swayed: “You’re just going to have to believe me on this one,” he said, and brought the board back to Tahoe where the two friends were living. 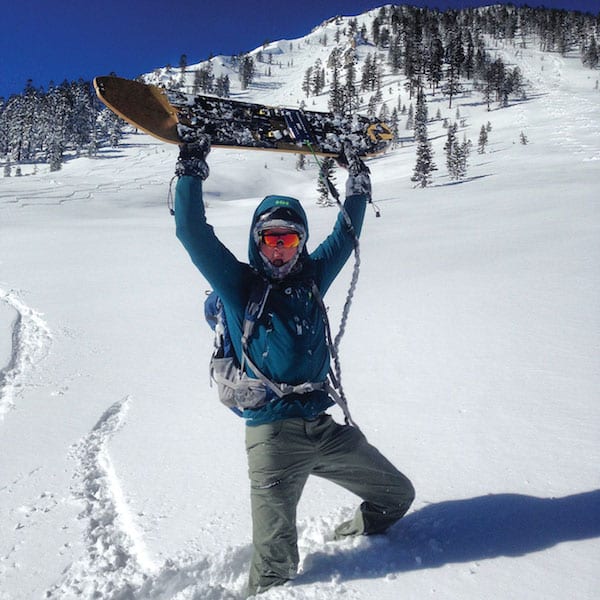 Despite “tomahawking at 50 miles an hour on the runout,” as Paciotti describes his first day on the powsurfer, it didn’t take long for him and his ski buddies to revel in the unfettered joy of cruising down a snow-covered mountain on the board. Thus was quietly born a small but fervent bindingless movement in Tahoe.

Although he was resistant to the sport initially, it was Woerz who spread the vibe locally. An electrically energetic 30-something with an inclination for building and tinkering, he started building powsurfers in Tahoe not long after Paciotti returned with the oddly shaped device.

He named his operation Blackwood Boards after the esteemed backcountry zone near Tahoe’s West Shore and set up shop out of a garage in Squaw Valley. Charging mainly to cover costs, his operation is vastly different from typical cash-minded companies in that his goal is to get people involved in the building process, and then out in the snow, versus turning a profit.

It’s not only the turns he cares about, but how the boards add a deeper level to an already ski-rich lifestyle.

“It’s kind of a community service, I think, making these boards with people,” says Woerz. “Folks need an outlet to be creative. We get to make these turns down a mountain and it looks pretty cool and all. And we love that. We dedicate our lives to that. But the construction of it is unique.”

Powsurfing is seen as the end result of a full circle from snowboarding’s now-ancient relative, the Snurfer. Patented by Sherman Poppen in the mid 1960s, the narrow shape of the Snurfer looked more like a water ski than a surfboard, and had a rope attached to the nose that the rider held to aid in balance. 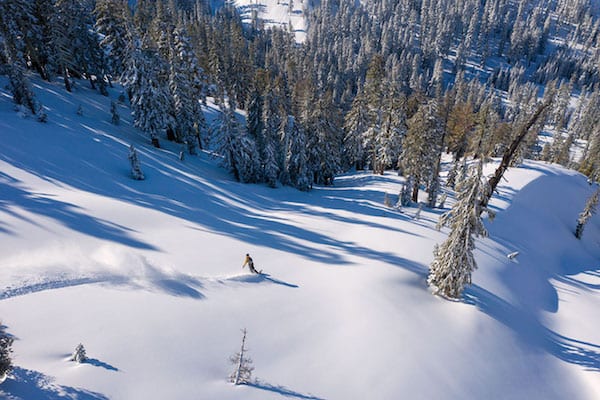 While all powder lovers—and especially snowboarders—owe a debt of gratitude to the Snurfer’s role in the snowsports industry family tree, to say that the powsurfer is a direct offspring of it ignores the wonderfully hybrid nature of the modern powsurfer.

At the surface, the sport looks the most like snowboarding, for obvious reasons. But the necessity to stay on top of the snow’s surface and maintain forward progress, combined with the free movement of the foot, aligns it with surfing. Plus, a variety of skateboard tricks like shove-its and kickflips are performed off rails and small drops.

A hodgepodge of the classic boardsports, it’s perhaps best summed up by the term “binding-free mountain surfing,” as written on the Grassroots Powdersurfing website. Based in Utah, the company was the first to start making powsurfers commercially, in 2007.

If You Build It…

While powsurfing started to catch on, and companies like Grassroots Powdersurfing and others in Europe and Japan contributed to the global trend, Woerz was distributing his boards around Tahoe by word of mouth, all while testing his creations—often via snowmobile-accessed riding in Blackwood Canyon.

I had plans to ride with Woerz and his buddies, but this year’s volatile winter brought heaps of snow, then nothing, then rain, then too much snow, etc., not allowing for the right day. 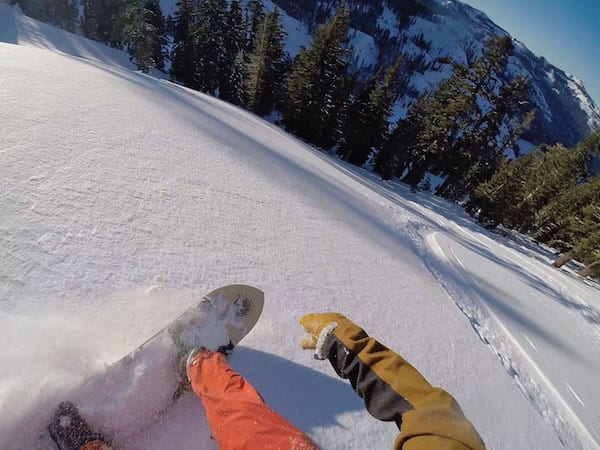 As a backup plan, I decided to visit Woerz’s headquarters at Squaw and get the scoop on his operation. I even helped spread glue to the Baltic birch plywood boards, which, when stacked four high and pressed, then cut to the desired shape and varnished, and slapped with some grip tape, form a finished product.

Woerz’s enthusiasm for the product oozes out as he talks of how he honed in the process, but he seems keen to remember not to be too serious.

“When you go visit local ski makers, they have elaborate setups that are very precise, mixing epoxies, bending edges and doing all this crazy (stuff)… This is not that. This will take us like 10 minutes,” he jokes.

He then takes me to a room full of boards and offers a rundown on a handful of designs, waxing poetic on the intricate balance of rocker, sidecut and more. He pulls his latest design off the rack.

“I wanted to keep the balance point on this one further back, surf style,” he says, “with a little more gradual rocker in the tip, so you can hit that front foot like a gas pedal, dog!”

Woerz also makes a split powsurfer, using cross-country boots and bindings for the ascent, essentially making any line that can be accessed by traditional backcountry equipment available on a powsurfer as well.

Falling for the Sport

Discussing the ecstatic feeling of riding a powsurfer, people drift easily into the ethereal.

“When we disconnect our feet from bindings, we get more connected to the mountain,” says Grassroots Powdersurfing founder Jeremy Jensen, explaining the appeal of the ride. “We can flow down the mountain more easily, like water down a river.” 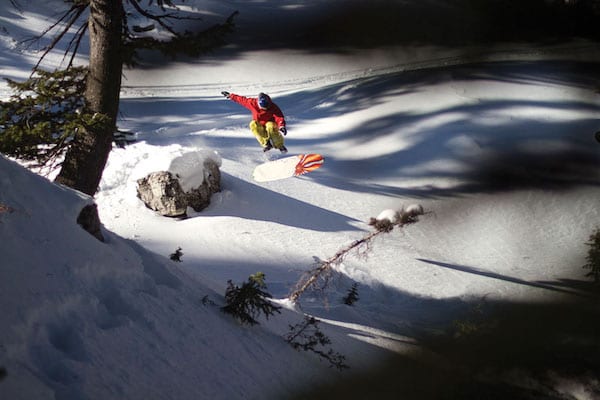 Grassroots Powdersurfing founder Jeremy Jensen incorporates a skate move with a kickflip in the backcountry, photo by Jeremy Jensen

A former competitive snowboarder, Jensen sees people flood with stoke when he takes them out and they react to the accomplishment of staying upright without bindings.

“We call the boards the ‘fountain of youth,’ as it’s great for someone in their 30s or 40s to feel like they’re 16 again,” says Jensen, who adds that the sport has even built a bridge for skiers who likely wouldn’t convert to snowboarding, but for whatever reason have a blast on a powsurfer.

It’s also simple and inexpensive, and easy to find places to do it. Poking around Mt. Rose or Donner Summit will yield a gold mine of options. When snow arrives at lake level, most backyards can suffice. Put in a 50-foot bootpack, link a few turns and repeat.

Additionally, in today’s hypercompetitive and sometimes dangerous industry, powsurfing provides a space to revel in the mellow.

“I’ve been in the shop building boards for lead forecasters for heli-ski operations, or very professional skiers, and they just want to get silly a little bit. And these boards provide just that,” says Woerz.

I had been learning the ways of the powsurfer for about a year and experienced a surge of dopamine-assisted bliss in early December after hiking up a stout but short line near Stanford Rock, when an early storm left the north-facing slopes cold and crispy.

In most previous powsurfing experiences, I couldn’t buck the awkwardness of my feet being able to shimmy about. Perhaps after 25 years of having them locked in place, it was hard to accept the fact that they could, and will, slip off.

I looked down my line, and reveled in how I scrutinized every rollover, rock and off-camber slice of snow, basically taking a microscope to a slope length that comprised about two regular-speed snowboard turns. But even a full-speed fall would be nothing more than a goofy splat. Ergo, life is chill on the powsurfer, I told myself, and in the comfort of Ward Canyon dropped in with a whoosh.

After a few herky-jerky turns where I overly relied on the upper body to force a direction change, I settled into the fact that each turn needs a little downward force on the back foot, in concert with leaning the body to turn, to at least create the illusion of control. I don’t know if other powsurfers look at turns this way—but it worked for me in that moment, and it did indeed bring me back to teenage-era surf stoke.

Powsurfing is barely a blip on the overall ski and snowboard industry radar, and isn’t included in any data sets about future industry growth. But by all anecdotal evidence, it looks healthy. Major board manufacturers are building them, and smaller companies are constantly popping up.

He has seen sales of his boards plateau and even go down in the recent past, but thinks this is largely due to more companies putting out more products. Although he believes some of the new products on the market are poorly built, he hopes they will improve over time. “I think the industry will take care of itself,” he says.

Woerz, who loosely estimates that he has made about 130 complete boards, has also seen interest grow locally.

“It’s as grassroots as we can get; it’s a nonprofit, not a business,” says Woerz. “At first I wanted to be able to reproduce them efficiently… But now I kinda just want people to get involved making their own boards.” He then hands me a brush and tells me to start spreading glue.

Tahoe City–based freelance writer Dave Zook is a bad surfer and an OK snowboarder. He hopes this somehow adds up to making him a brilliant powsurfer.