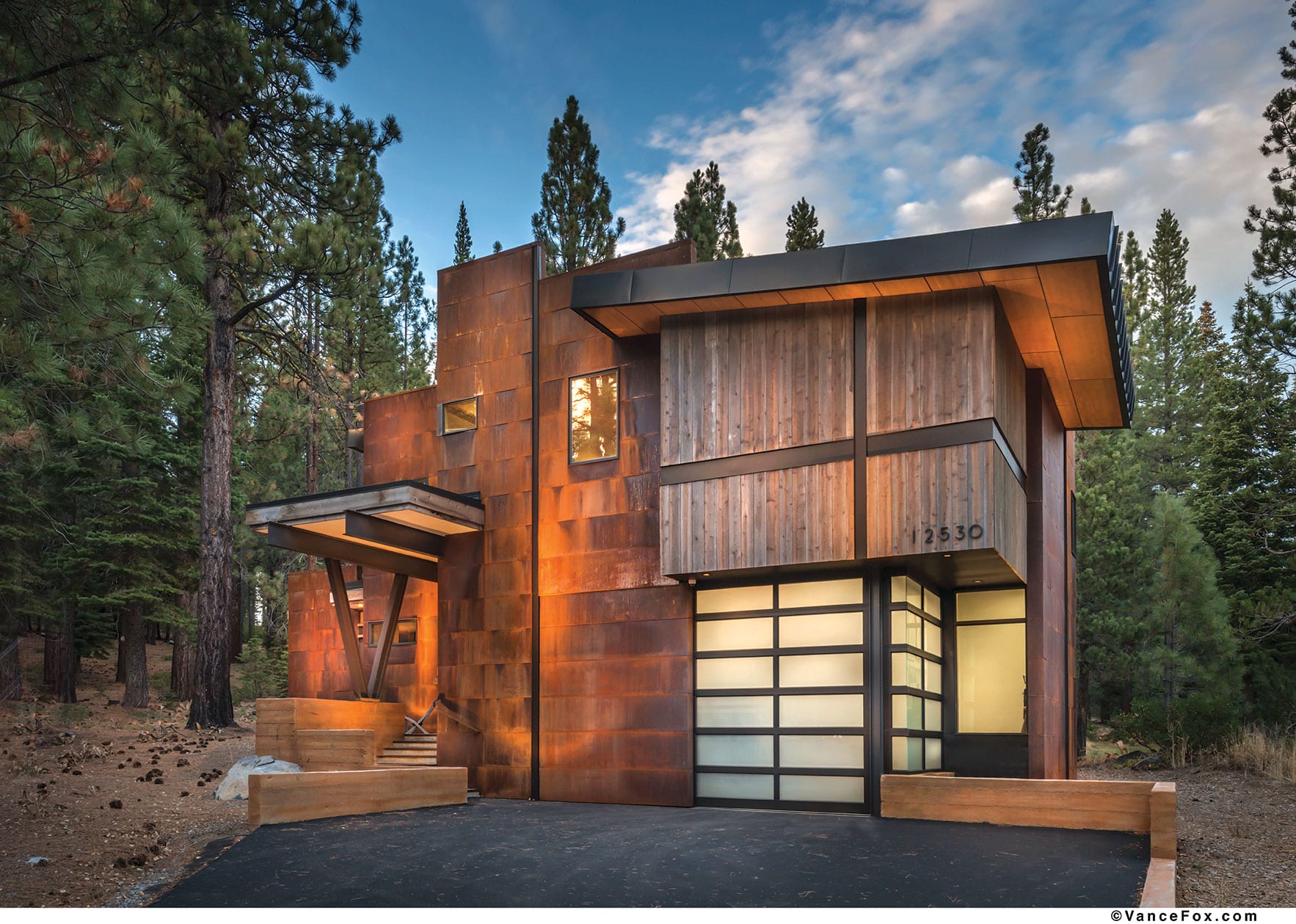 Sitting on a blue sofa beneath an Andrew Bolam painting of a wolverine, Joann Ellero, a self-described “scrappy kid of immigrant parents from Detroit,” announced that she never, ever envisioned the dream house she was sitting in before the design process started. 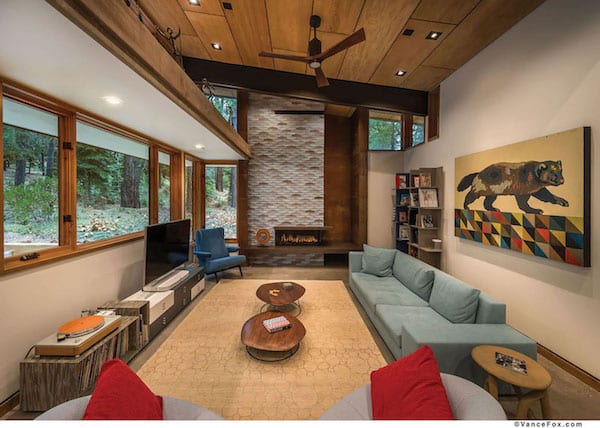 The asymmetric fireplace pop-out is defined by a Heath tile–wrapped chimney in a COR-TEN finished recess; windows on two sides open the room to the forest beyond while the room is scaled by the blade roof extending into the space, photo by Vance Fox

“I never had this idea that someday we were going to build this fabulous house in the woods,” she says. “We’ve always liked cool houses, but I never dreamed I’d have an architect house.”

Ellero and her husband, Andy Pasternak—both Michigan natives and doctors in Reno, where they live full time—spent many a weekend over the course of several years in their Tahoe Donner condominium. Coming up to Truckee and getting out to ski, bike and run on Tahoe Donner’s extensive trail system is how the couple decompressed, relaxed and re-energized for the week ahead.

“We had that condo for about eight years and it was like being on vacation every weekend,” says Ellero. But over time, with no shortage of visitors and Ellero’s mother living with them half of the year, the time to consider building a house had come. “My mom loves the outdoors, too, and we were outgrowing the condo and I really wanted my mom to have her own space.”

Through connections with friends in Reno, the couple hired general contractor Dave Ariza, owner of Alpine Lake Homes, and then eventually found their way to architect Joel Sherman of Truckee-based jls design.

“There are two houses in Tahoe Donner that we loved and found out Joel designed them both,” says Pasternak. “When we met him, we hit it off immediately. It was like the stars aligned.”

Situated between two existing houses, Sherman maximized the privacy of the property by taking visual ownership of the forested open space behind the house and skillfully wriggling the structure into place. 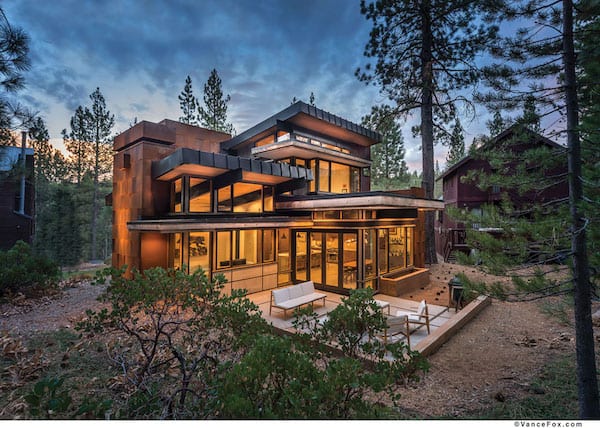 Extensive glass on the back of the home opens the main living areas to the forested hillside, photo by Vance Fox

“This is what it was all about,” says Sherman, looking out into the wooded slope just beyond the terrace. “The challenge was, ‘How do I grab this forest on the ubiquitous Tahoe Donner lot and nestle a house in here?’”

Sherman started by siting the house on an angle and creating a winding procession to the front door, which is tucked just beyond the line of sight from the street. The front face of the home beautifully closes itself off from the road but remains architecturally engaging at the same time. The mix of wood siding, COR-TEN steel panels, a frosted glass corner and blade roof over low, board-formed concrete site walls is artfully arranged in a well-balanced composition that distracts from the minimal number of windows and the absence of an expected, traditional residential street front.

“The house was never supposed to be big and meandering,” says Sherman. “It was supposed to be this compact little box. It’s basically two rectangles, two ‘events.’”

The front door pivots open to a light, glowing entry area enclosed by frosted glass and white walls, a little bit like modernist heaven. Main living spaces are arranged at the back of the house: The centrally located open kitchen balances between dining and living with large expanses of glass erasing the sense of barrier between inside and outside. Carefully placed windows on perimeter walls bring in more light, enhancing the airy, woodsy feel of the room. But sight lines remain clean, keeping neighboring houses out of view. 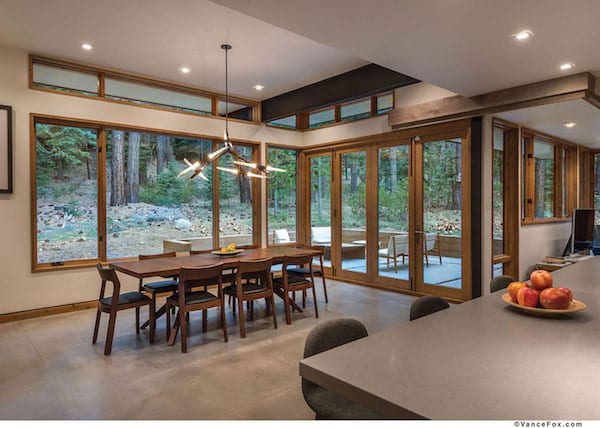 The dining area features floor-to-ceiling glass and opens to the terrace beyond, photo by Vance Fox

The main level also includes a guest bedroom while the master suite, Ellero’s mother’s bedroom suite and a bonus room take up the second floor. There is a surprise attic space above the garage and an intimate wine cellar below the stair landing that Pasternak says is his favorite thing about the house. “He’s always down there, clinking things around,” adds Ellero with a smile.

Finishes throughout the house are simple and without fuss: concrete floors, alder windows, trim and doors; expressed steel columns, fir ceiling panels, glulam stair treads, Heath tile and IKEA cabinets with Semihandmade faces in walnut. “One of the things we like about Joel is that he can make the architecture work with familiar, everyday materials,” says Pasternak.

Like the composition of the front elevation with its push and pull of mass and materials, the tile-clad fireplace wall in the living room is also an exercise in asymmetrical composition. With varying sizes of windows on either side, a recessed COR-TEN volume and continuous blade roof coming into play, the wall maintains a seamless dialogue with the exterior, the upper level and the structure all at the same time, without being obvious about it.

Subtle moves seem to be what the house is really about. Sherman will say he is a “forced designer,” meaning all his design decisions must have a reason behind them. But nothing in this house feels forced. All the spaces in the home are low-key and comfortable with a simple elegance. The design of the garage is so low-key that no one even knows it’s there. “A lot of people ask us if we even have a garage,” says Pasternak. 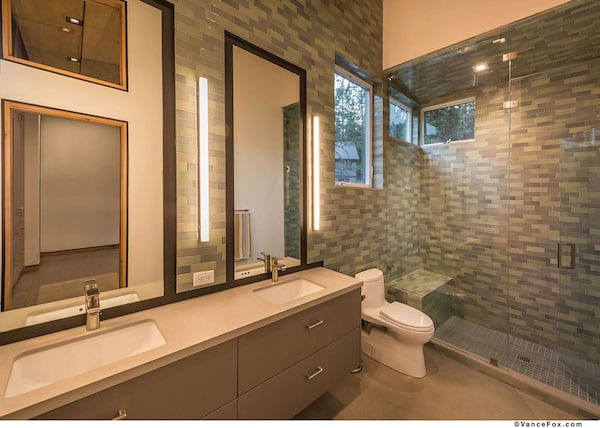 The garage door is 18 feet wide but exterior materials are artfully applied and detailed to fully conceal the opening and make any existence of a garage questionable. Hiding the garage door to maintain a human-centric entry experience and keep the focus of the architecture on people is standard issue for Sherman. With a sly smile, he confesses that one day, he hopes to eliminate driveways as well.

Ariza describes the garage door as a “first” in his long career in the construction business, but also calls it and many other detailing challenges on the project a welcome change with stunning results.

“I was excited to engage with Joel’s ‘out-of-the-box’ thinking,” he says. “Spatial awareness and orientation are very important contributing factors in his designs.”

The large wolverine painting in the living room is an homage to the University of Michigan, Ellero’s and Pasternak’s alma matter. Little plastic animals can be found whimsically lined up on window sills and, representing tens of thousands of hard-earned miles, the entire loft above the garage is lined with hundreds of race numbers from the biking, skiing and running events the couple has participated in over the years.

The architecture is clearly Sherman’s, but this so-called “architect” house fully belongs to Ellero and Pasternak. “They were wonderful clients,” says Sherman. “I just wanted to give them the backdrop to be them.”