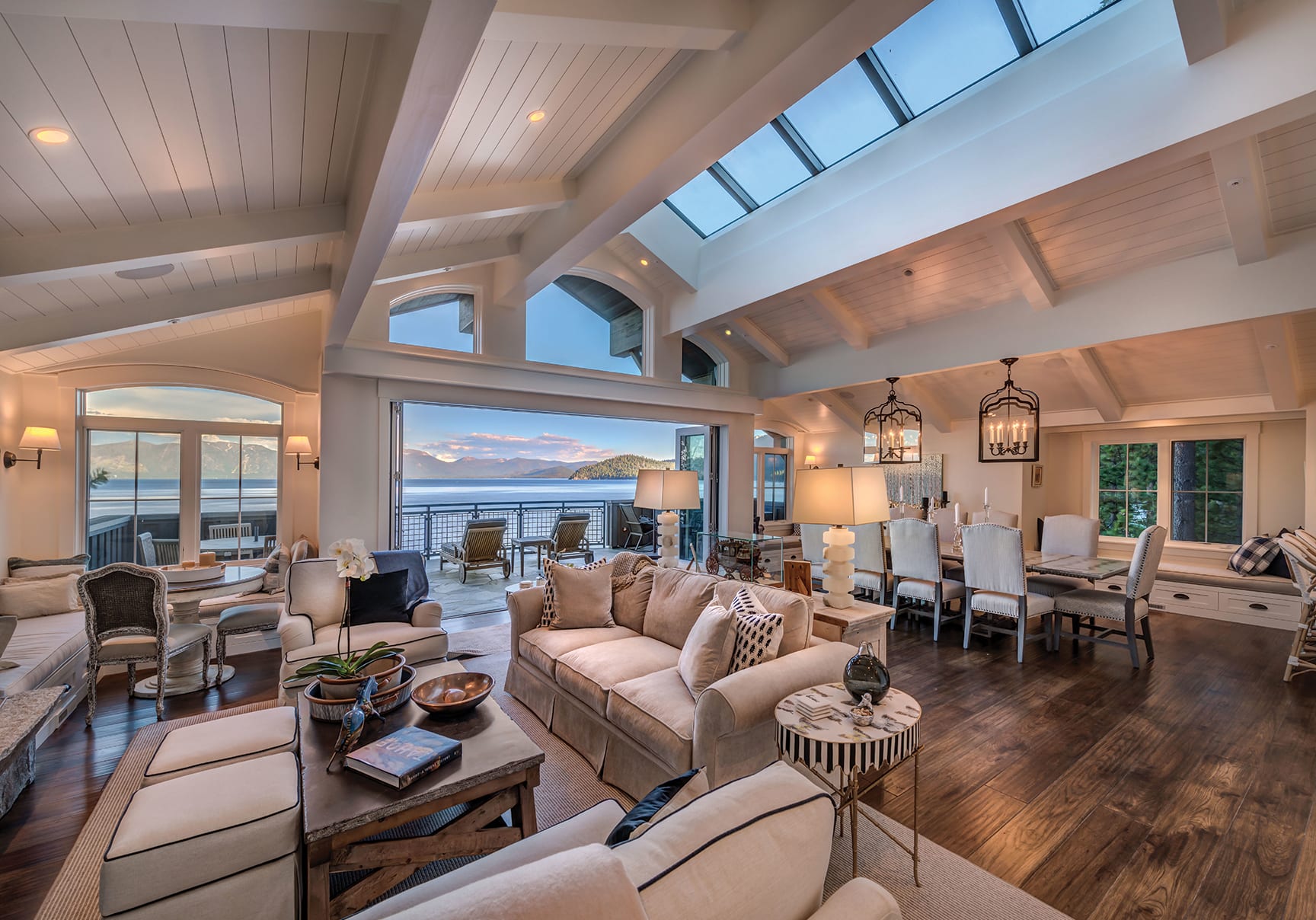 Nancy and Ned Pike had rented in Tahoe for 30 years, but always wanted their own house on the lake. One day, they were out for a walk when, just a few doors down from their Meeks Bay rental, they saw a neighbor had posted a “for sale by owner” sign on his property. The lot was steep and dotted with boulders, while the cabin was eccentric and dated to the 1940s.

“It took quite a bit of foresight to imagine what it could be,” Nancy says. 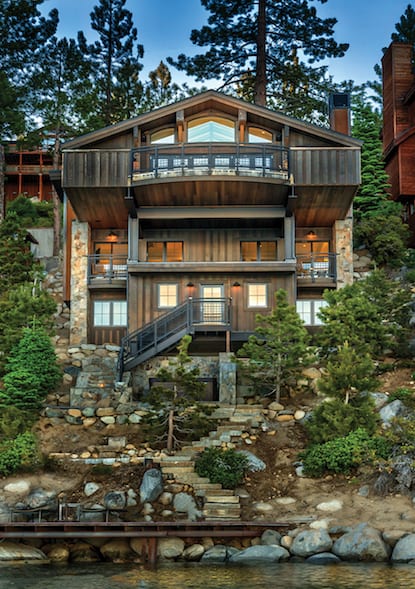 The home rises from a steep, narrow lot that presented challenges, yet provided plenty of exercise, for the project team. A stone staircase built by Eric Schwedt Stone and Masonry winds down to a lower spa terrace and private pier

For about three years, the couple lived in the cabin while they worked through the design, finances and permitting. The couple assembled architect Tim Ward of Ward-Young Architects, Tahoe City’s Loverde Builders and interior designer Shannon Barter of Tahoe City’s id.3 as their team.

The property was not an easy one.

“It’s a very steep site and it had an existing house that was sitting over a boulder,” Ward says. “There was a lot of drilling and breaking up of the boulders to dig the house in, mainly because of keeping within the height recommendations of TRPA [Tahoe Regional Planning Agency]. It was important that we get it down; we had to dig in the lower floor.”

Digging entailed about three months of blasting and drilling over the summer.

“In order not to jeopardize the stability of the excavated bank of the adjacent neighbors, we had to install a retaining system,” says Rich Loverde, owner of Loverde Builders. “This system is referred to as micro piling and is a series of hollow, threaded steel rods that are drilled 40 feet deep and filled with concrete to stabilize the excavated bank. It was a major undertaking; quite an engineering feat just to get the foundation in.”

Superintendent Brian Parker agrees. Even once the foundation was in, the steep, stepped site meant a lot of hiking up and down. Parker wore an odometer; most days, he clocked between 80 and 100 floors climbed and about 15,000 steps. “I had good skier legs that year,” he says with a laugh. He and the crew referred to the property as “Misery Hill.”

Because the lot was so narrow, the team had to plan ahead. For example, trees that needed to be planted in the back landscape had to be craned down far in advance, before the structure went up and would block the route.

“A number of things we had to crane down—things that needed to be in the house that we couldn’t get to later,” Ward says. “It was pretty dramatic that way.” 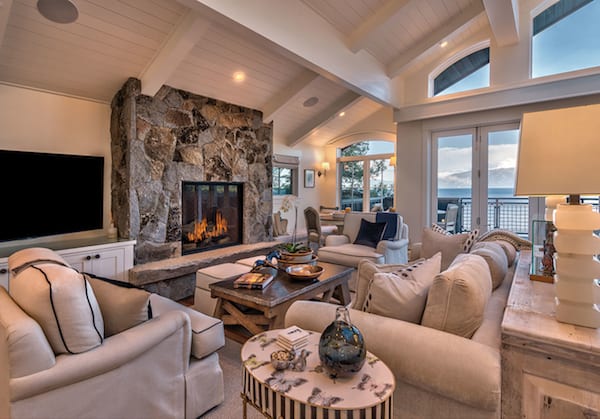 At the owners’ request, interior designer Shannon Barter created a Cape Cod–style house with select mountain touches, such as a Sierra granite fireplace in the living room

Meanwhile, Barter entered the build process early, while the home was still on paper, to choose interior details.

“We just add on to Ward-Young’s plans, then give the job site a complete packet,” Barter says. “If the architecture is the cake, we put the frosting on it.”

Barter had collaborated with Loverde and Ward-Young multiple times in the past. She took the floor plans and worked with Nancy to choose various finishes and materials, from the crown moldings down to the floor tiles. “We know when things are going to be needed and we know the construction process,” Barter says. “When they started framing, we had all those details figured out.”

As far as the interior, Nancy knew what she wanted. She and Ned had seen another Loverde-built home near Sunnyside. “We loved it so much,” Nancy says. “We said, ‘We want our home to look just like that.’”

That made things easy for Barter.

“[Nancy] was very specific about the house she wanted: A Cape Cod–inspired house in the mountains,” Barter says.

That vision translated into an elegant, bright and cheery mountain home.

The steep site means that the home is nestled into the property. Steps lead down from the garage to an entry terrace, and from there into the airy great room. A ridgeline skylight brings natural light deep into the house, while bifold doors lead to a deck that cantilevers off the end of the floor, giving the feeling of blending into Lake Tahoe beyond.

“That’s probably my favorite feature on that home,” Parker says. “You could almost toss a fishing line off that deck.” 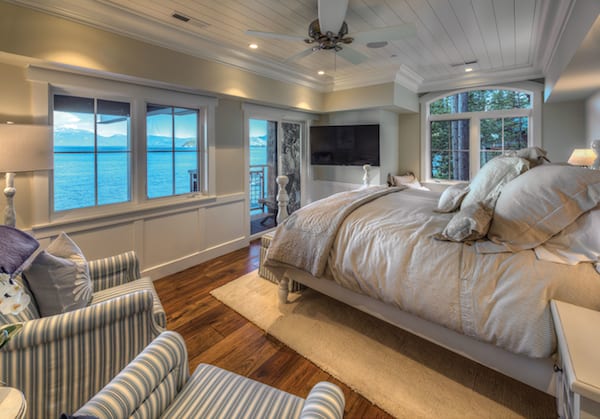 Lake views abound from every bedroom, including the master suite beneath the main level of the home

Recessed white wood ceilings and white cabinetry exude the Cape Cod style Nancy desired. To keep from feeling overly bright or stark, the white is juxtaposed against warm, hand-scraped hickory floors throughout the home. A quartz product that resembles Carrera marble is used in the kitchen countertops and bathrooms; the rich tone of the flooring keeps the rooms from feeling cold.

“For the light fixtures, we guided her to things that were traditional, but with a transitional twist,” Barter says. “She likes pretty, but sometimes pretty means dainty and fragile.” In the dining room, for example, Barter helped choose beautiful metal fixtures that also match the scale of the open great room.

The majority of the furnishings, including the dining room chairs and the beds, were created by Andrew Miller of CL Designs. Nancy showed him pictures of furnishings she liked, as well as floor plans, and he custom built the furniture to fit. “His work was remarkable,” Nancy says, adding that it was also surprisingly affordable. “I didn’t have to shop around.”

An elevator connects all the floors of the home. Beneath the main level are a pair of master bedrooms, each with stunning views of the lake; below that are additional bedrooms, including a bunk room, and access to the outdoor stone staircase that leads to a lower spa terrace and private pier. 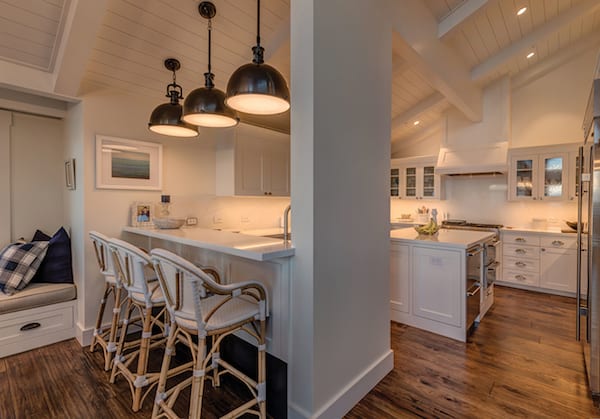 Warm, hand-scraped hickory floors juxtapose against the bright whites prevalent throughout the home

The Pikes could not be happier with their home, as well as the design-build process.

“I wish I could do it again,” says Nancy, who describes Ward as “a genius” and Barter as “wonderful.” She also loved working with Loverde, who is based out of the U.S. Bank building in Tahoe City, a property Ned Pike happened to own at the time. “We knew he’d look out for us and do a really good job,” Nancy says. “It was a pleasure to work with him and his crew.”

After a two-year build, the project finished in early 2019. “It was a pure joy; we feel so blessed,” Nancy says. “We love that area, love the lake. It’s just a dream come true.”