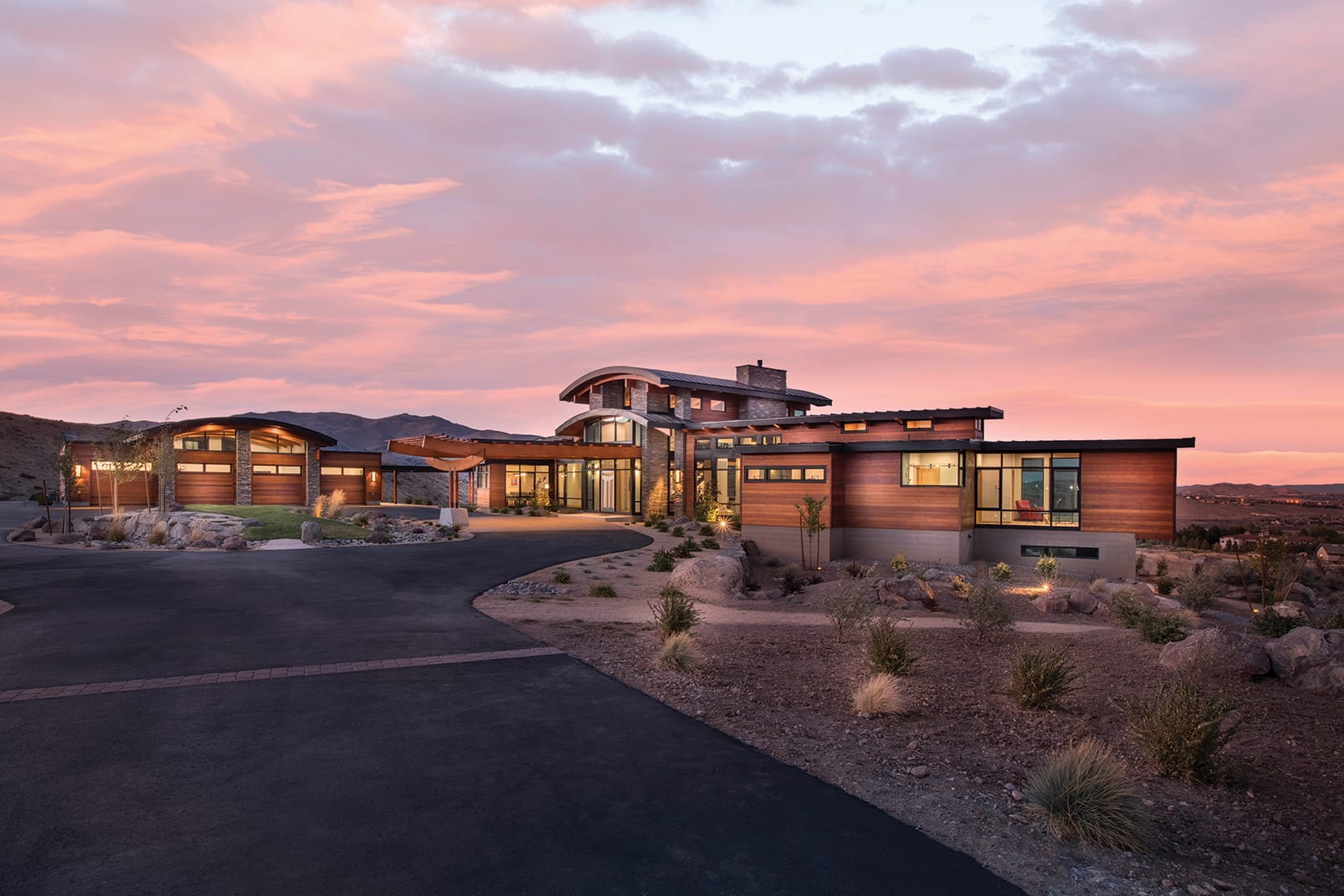 The home's driveway circles through a porte-cochere, which features an uplifted, curved design intended to resemble a bird’s feathered tail

A love of aviation and music inspired this Reno-area home

Tom and Peggy Hall lived in a beautiful home off of Washoe Valley’s Franktown Road, but for years they’d been talking about moving “closer to town,” says Peggy. In 2014, Tom bought a couple of Reno lots at a Washoe County tax sale. “Peg asked what I did and I said, ‘I bought some dirt today,’” Tom recalls with a laugh.

He took Peggy to see two of the lots. One, in the north Reno community of Somersett, was nice, but nothing special. The second, Peg loved. Nestled at the edge of Forest Service lands, it had a panoramic view of the city lights in one direction and views of the Hunter Creek ridge in the other.

The couple happened to be recommended to architect Jordan Knighton of JK Architecture Engineering. “Jordan is a nice guy,” Tom says. “Plus, a super salesman; he’s done some fantastic work and he makes you feel comfortable.” 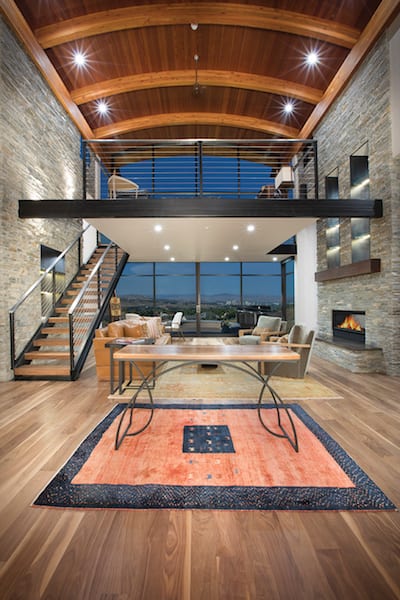 They continued putting together their team, hiring Marcio Decker of Aspen Leaf Interiors, with whom the couple has collaborated twice over the past decade, and Darin Murphy of Murphy Built Construction.

The Halls wanted the home to capture their loves of flight, music and art—Tom has had his pilot license since 1966, while Peggy is a trumpeter in a brass quintet called Boca Brass—while also maximizing the area’s stunning natural views.

“The design was inspired by the conceptualization of a falcon in flight,” Knighton says. “This concept evolved through discussions of Tom’s passion for aviation and the perch-top knoll site that evoked feelings of flight above Reno.”

Ready to build, the couple put their Washoe Valley home, where Tom had lived for 39 years, on the market. They lowered the price a couple of times, switched realtors and decluttered the home, putting many of their personal items into the garage to try to make the property more enticing. In September 2016, there were still no buyers and the couple decided they’d have to put their dreams of building on the Hunter Creek property on hold.

A month later, on October 14, 2016, a fire swept through Washoe Valley. Twenty-three homes were lost in the blaze, including the Halls’.

“The house was still smoking when the insurance agent came,” Tom says.

While they lost much in the blaze, their garage, which housed their cars and some of their personal items, wasn’t touched. And while devastating, there was a silver lining: Not only did the insurance money mean the Halls could begin construction, but Washoe County allowed them to the front of the line in the permitting process. The house plans were submitted December 23 and the initial response came back four days later. The permit was approved in March, and the 4,760-square-foot home broke ground in spring 2017.

The idea of flight begins as one approaches the house, which is split into two literal wings. The driveway circles through the porte-cochere, which uses an uplifting, curved design that resembles a bird’s long, feathered tail.

A custom wood-and-glass door by Craftsmen in Wood—meant to resemble a Japanese torii gate and reflect a spiritual cleansing—opens into a soaring great room highlighted by a curved ceiling. “This was both a wing in flight and triumphal musical march of experience along the path,” Knighton says of the curved galleria circulation. 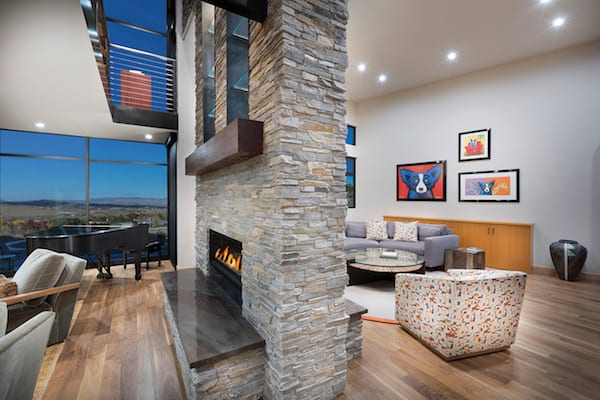 A stone wall and see-through fireplace separate the great room from an informal family room, where colorful artwork by George Rodrigue hangs above a plush seating area

A window wall showcases views of downtown Reno; a circular patio beyond is meant to resemble the plane’s propeller. Dual two-story ledgestone walls set off this great room space, while also supporting the open loft above that serves as Tom’s pilot lounge.

“[The house] mimics in many ways the layout of a plane, with its fuselage being the main center of the home housing the kitchen, dining room and great rooms, the two wings consist of the bedrooms, and the garage section mimics a detached empennage,” Murphy says. “Of course, the cockpit area is the office with its unparalleled views of the entire city of Reno and the surrounding mountains.”

Floating stairs lead up to the pilot’s lounge, where posters, ashtrays and other memorabilia commemorate both Western Airlines—a now-defunct airline for which Tom’s father was a captain and which operated from 1926 to 1976—and Pan Am, once America’s largest air carrier. A sign reads, “A man’s home is his castle. But a hangar is his sanctuary.”

“It’s a wonderful contemplative space with eloquent views and an uplifting feeling softened with the arched ceiling,” Knighton says.

It’s also the perfect place to observe the glide paths of planes coming into the Reno-Tahoe International Airport, something Tom does nightly.

The great room is an elegant, formal area, with a grand piano and stunning views. Open shelving in one of the ledgestone walls provides a dramatic display for a collection of pots and vases that the couple found at the Borrego Art Institute in Southern California. 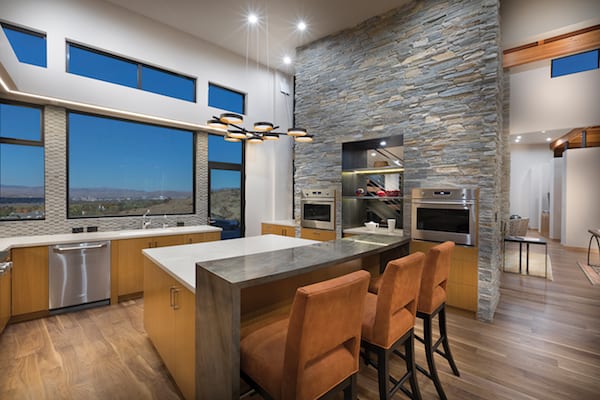 The ledgestone wall dividing the great room from the kitchen includes built-in storage space and appliances. Teak cabinetry here is topped by quartz counters, while the large island features a brown granite bar with a waterfall edge

“It’s very minimalist, in a sense,” Decker says. “I wanted to make sure that we really allow the natural landscape—which is that foothill Nevada native vegetation—to be a focal point. On one side, you have city views and lights and on the Nevada side you have nature. We had to make sure what we did with the interiors would not completely blur you from it; we didn’t want to hide any of it.”

A see-through fireplace separates the great room from the informal family room beyond. Decker notes the punctuations of color in the chairs and couch pillows that complement the bright hues of the couple’s George Rodrigue artwork above. He worked with the couple’s private art collection, drawing inspiration from it as he selected the interior design package, to include furnishings, material choices and color schemes. “It’s wonderful to work with clients when they obviously appreciate and collect art,” Decker says.

From the family room, a hallway passes the guest bedrooms, used when the Halls’ five kids and five grandkids visit, and culminates in Peggy’s music room, where she and her brass quintet rehearse weekly. Wood paneling provides acoustical treatment, while window walls offer views to the Reno on one side and the mountains on the other.

“The acoustics were very important, particularly given their musician sensitivity,” Knighton says. “We prepared acoustical engineering analysis and provided sound attenuation details and materials to heighten the acoustic experience.”

The couple has since hosted multiple musical events in their home, including for University of Nevada, Reno. But the music room also doubles as a playroom for the Halls’ 4-year-old granddaughter.

“I share this room with her,” Peggy says with a laugh.

On the opposite wing of the house, the ledgestone wall that divides the kitchen from the great room also houses storage space and appliances like dual ovens. Quarter-sawn teak cabinetry is topped by quartz counters, while the large island provides ample space for potlucks, and is highlighted by a brown granite bar with a waterfall edge. Burnt orange barstools complement the modern lighting and the walnut flooring, which adds a sense of warmth throughout the home. 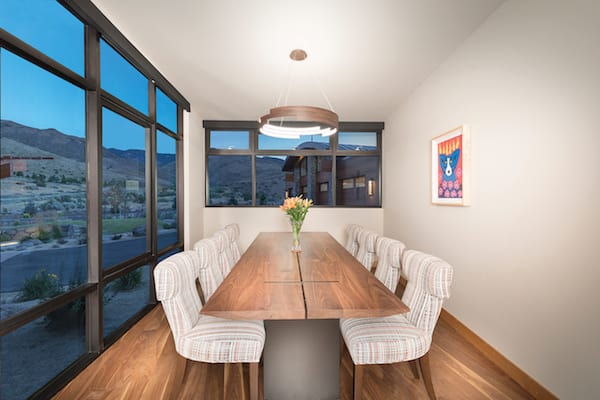 An eight-person dining table that Decker curated and tailored to the space—and designed to taper at the edges, like an airplane wing—is set across from the kitchen; floor-to-ceiling windows display the mountains behind the home.

The hallway ends at the master wing. Here, cleverly designed windows and coverings allow the wing to find a balance between maximizing its surroundings and ensuring privacy. For example, in the bathroom, windows in the upper part of the corner shower allow views, while the soaking tub is protected from anyone seeing in with a detachable window cling. In the bedroom, plum-colored curtains can be easily opened or shut, while the custom bed is oriented toward the massive windows and views of Reno.

“At night, the downtown lights are just spectacular,” Tom says.

The home’s exterior is made of hot-rolled steel, redwood siding and ledgestone. A four-car garage features the same curving roofline as the main home. The landscaping plan, executed by Brian Dean of Gail Willey Landscaping, is dramatic, with a focus on xeriscape native landscaping and minimizing site disturbance.

Aside from a rattlesnake encounter, Knighton says, the project went smoothly. “The curvilinear nature of the plan presented some challenges in detailing and constructability given the unconventional nonrectangular shape,” he says. “However, it was little issue for the gain of the positive design experience.”

Murphy agrees that the curvature added some difficulties. “It is hard to find a straight line in the entire house,” he says. “Every wall and feature has a slight curve, as would be expected in following the architecture of a plane; even the cabinetry is curved.”

Overall, though, the build-design team enjoyed the process. “The clients are just a delight to work with,” Decker says. “They are very responsive to ideas; they let the process unravel really easily and trusted our selections and our direction.”

As for the Halls, they are rightfully proud of the home, though Tom notes that the project had its bumps. “It’s like making sausage,” he says. “Sometimes, you don’t want to know all about it.”

Still, the couple notes that they can’t complain. Though they lost a lot in the Washoe Valley fire, they say they were blessed in many ways. “We had enough resources to make a dream come true,” Peggy says.