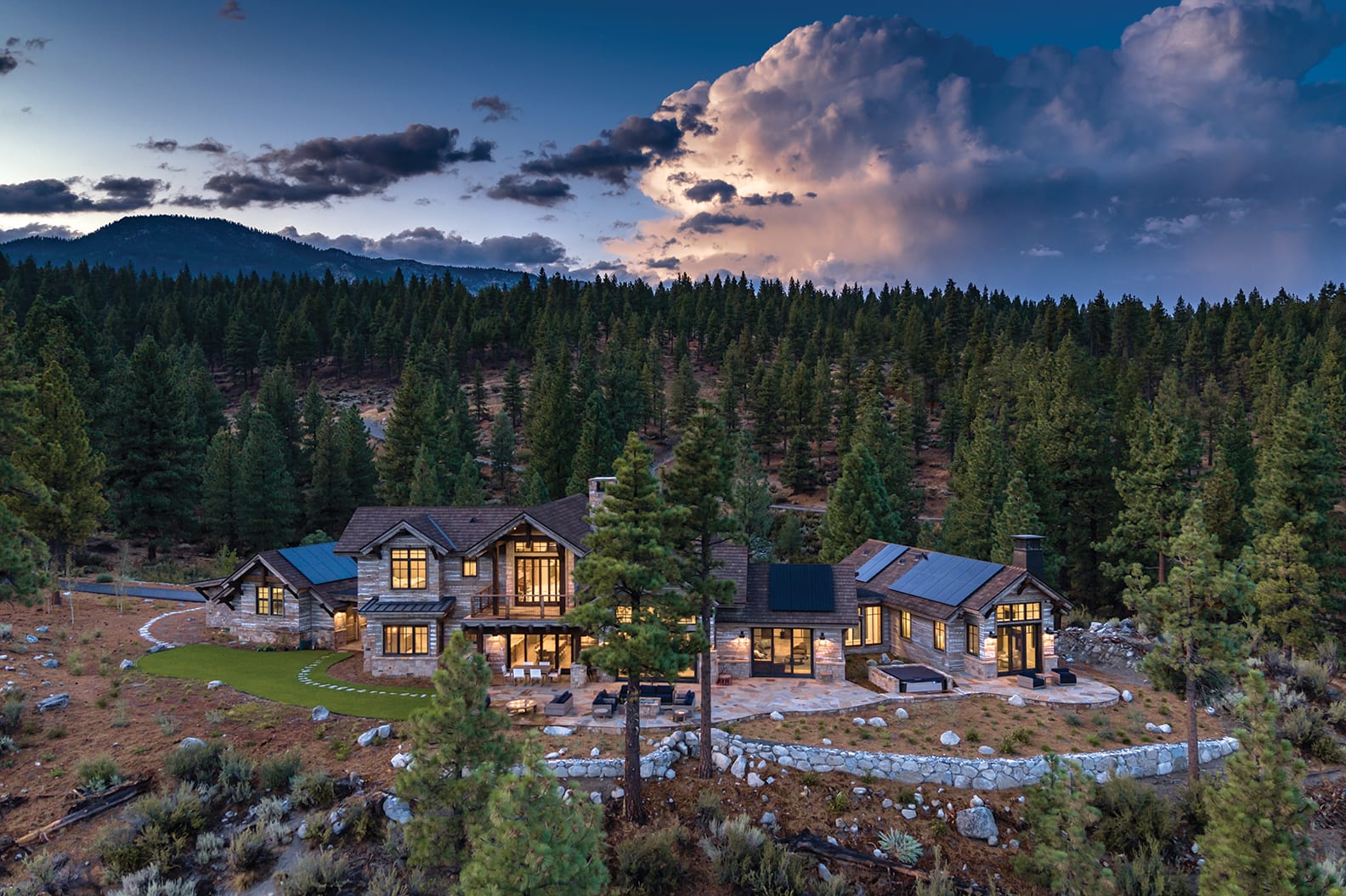 The Clear Creek Tahoe home sits atop a ridge with stunning views of the surrounding mountains and Carson Valley, photo by Ryan Fitzhenry

Collin and Andrea Wilkerson had never been to Nevada when they put a deposit on a 2.25-acre lot in Clear Creek Tahoe. It was 2016 and the couple, who live in Hong Kong full time with their two young children, were searching the globe for a place to create a homestead, a place where they could escape city life.

“We thought of New Zealand, Australia… We had every choice in the world,” Collin says. 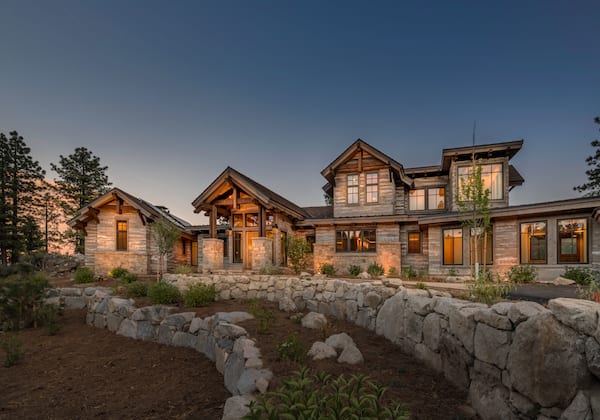 The Wilkersons browsed Clear Creek’s lots online and discussed the logistics. They discovered seven daily flights that flew from Hong Kong to the United States and realized they could be in Nevada in basically a day. Andrea loved lot 16 and the couple put a deposit down, then flew out two weeks later.

They arrived to feet of snow. As cars couldn’t access the lot, the family tromped through the elements to get a feel for the property. They were sold. They started researching area contractors and found Scott Gillespie, principal of Truckee’s SANDBOX Studio, and Truckee’s Mark Tanner Construction (MTC). “The quality and the manner of construction just sold us,” Collin says.

With MTC superintendent Robert James, project manager Casey Eberhardt and interior designer Joanna Branzell (who worked for MTC at the time but has since started her own design firm), the Wilkersons put together their mission. They wanted a classic, timelessly designed homestead that fit its rural location, focused on bringing the outdoors in, while also incorporating the family’s beliefs and passions.

“The lot took a lot of vision to realize its potential, as it was a narrow spine set quite a bit off the road with a long, meandering drive,” Gillespie says. “The lot drops off steeply on both the front and back, so we designed the home to snake along the spine to keep the footprint narrow. This, in turn, allowed us to capture the amazing Carson Valley views from almost every room in the house.”

The home was one of the first built in Clear Creek Tahoe aside from the developers’ and original investors’ properties. 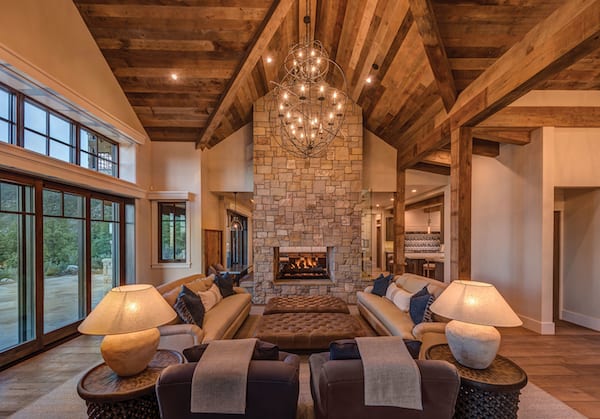 For Branzell, the goal was to design a home that spoke to her clients’ souls, while also referencing Nevada and its history. “The clients are well-traveled and have an immense amount of culture behind them,” she says. “I wanted to bring bits and pieces of their past, current and future life into the designs and selections of this home.”

The entryway contains a church pew, sourced by Branzell, and the windows feature subtle crosses, a nod to the couple’s faith. A powder room is fronted by a door from the Virginia Military Institute, where Collin attended school and where he lived as a cadet. The powder room contains honeycomb lights, a cement sink and galvanized steel that the team describes as an “outhouse on the inhouse.”

The great room is at the center of the home, where scissor trusses in the reclaimed wood ceiling are reminiscent of old barns and play off the sandstone fireplace and the oak flooring. An asymmetrical hallway, meant to call to mind old Nevada mine shafts, leads to the master wing. On one side of the hallway is a media room set off by sliding corrugated metal barn doors. Branzell chose the metal as a reminder of the material used in Malaysia and throughout Asia on working-class homes, as well as a nod to the old homesteads around Nevada.

Opposite the media room is an office. Both the Wilkersons worked in the airline industry—Andrea for more than two decades as a flight attendant, Collin designing airplane interiors—and the aviation theme is prominent here. The two desks, designed by Branzell and made by MTC’s millworks, taper in the style of airplane wings, while the riveted metal ceiling is reminiscent of the airplane facade of World War II fighter planes. The 400-plus-pound door looks like that of a Piper Cub hangar door. 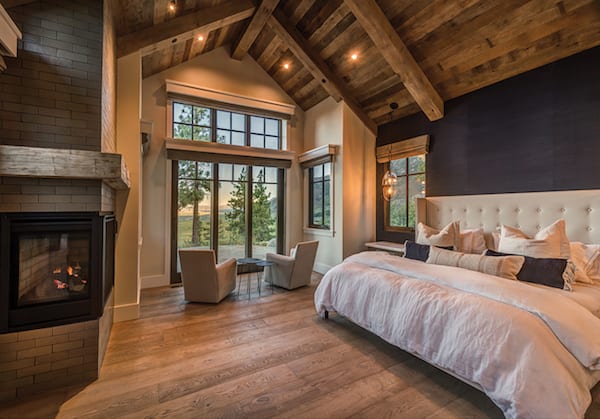 Windows in the lofty master suite capture views all the way to the Sweetwater Mountains some 140 miles away, photo by Vance Fox

The hallway ends at the master wing, which includes a luxurious steam shower and soaking tub in the bathroom, while in the bedroom, bamboo wallpaper nods to the couple’s roots. Views look out to the Sweetwater Mountains in the distance, as well as the Pine Nut and Sierra ranges. The property also overlooks the old Schneider Ranch, one of the oldest ranches in Nevada.

“We wanted to be part of that history,” Collin says.

Back in the great room, a two-sided stone fireplace delineates the space between the great room and the dining room. On one side of the 5-by-3-foot fireplace is a breakfast nook, cleverly designed with built-in benches and a custom zinc countertop that can be moved out of the way if necessary, while on the other side of the fireplace is a wine cabinet. In the dining room, sliding doors open to the back patio, while the ceiling above the dining table is inset with reclaimed oak.

The kitchen island is a solid piece of quartz that measures about 10 feet by 6 feet. “It took eight guys to get it in,” James recalls.

Oak beams on the ceiling give a ranch-style feel, complementing the rough-hewn oak flooring. Sconces above the sink were chosen to look like those used in old Nevada mines. 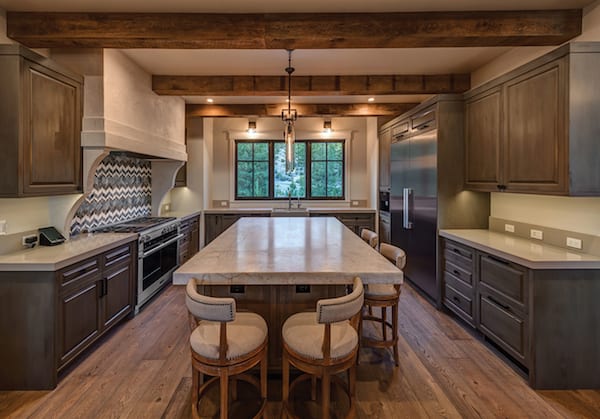 The range hood is made of crushed core marble plaster by Incline Village artist Molly O’Mara. For the backsplash, Branzell used handblown glass sourced from Ann Sacks that referenced Andrea’s love of Tiffany-style lamps. Code specified an outlet was needed in the wall, but the team was so diligent that they painted the socket to perfectly match the glass tiles, rendering it almost invisible.

“We wanted not off-the-shelf,” Collin says. “Joanna and all the guys said, ‘We’ve been waiting for this opportunity.’”

For example, in the mechanical room is a light that James had liked, but never had a reason to use before. “Robert had this light in his garage, waiting to be used for 15 years,” Collin says.

A second door from Collin’s old school fronts the pantry. In the wood-cladded guest room, a Murphy bed blends into the wall, allowing the space to be used for guests or as a craft room. The stairs feature Malaysian-style tile, harking back to Andrea’s roots.

Another guest room is upstairs, as is the children’s room, which is bright and beckoning. “It feels like a Dr. Seuss book,” James says. 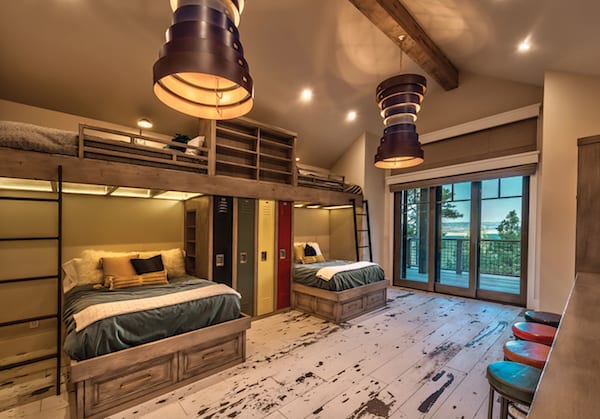 The children’s bunk room on the second floor is bright and fun, with colorful lockers and oversized blue metal hoop lights, photo by Vance Fox

Oversized blue metal hoop lights set a whimsical tone. Brightly colored lockers, each engraved with the birth year of one of the family members, separate two sets of custom alder bunk beds. An abacus is built into the cabinetry, and the pre-finished flooring was painted and distressed.

“I wanted to create a space for the kids to call their own, a space that they could play, sleep and grow up in,” Branzell says. “Overall, I just wanted to have fun with this room, so that the kids and their parents could enjoy the home in a different setting and be a little less formal and more playful.”

An outdoor deck off the kids’ room features a porch swing and Adirondack chairs made from reclaimed Indonesia boatwood. “It’s made to be fun,” Collin says.

The home’s exterior uses the same interior stone found on the fireplace, as well as a unique siding material called NatureAged by reclaimed wood company Trestlewood. “It’s made to look like an old barn and the white paint has been slowly peeling off for the last hundred years,” Eberhardt says.

Though the family made the journey every three months or so, much of the work had to be done long distance. Gillespie used sophisticated 3-D modeling technologies during the design phase, while the MTC crew often used text or WhatsApp. 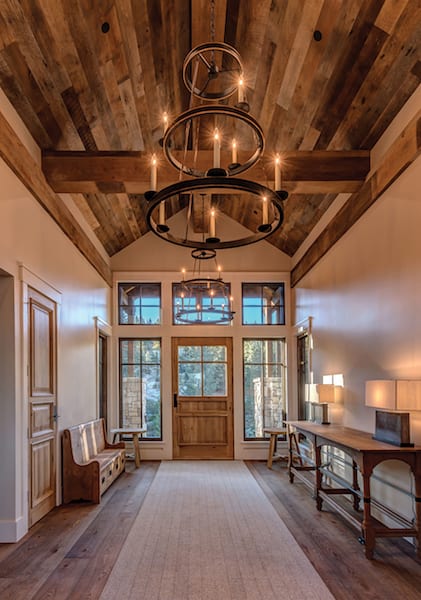 Metal chandeliers from Circa Lighting in San Francisco hang from the vaulted entry, which contains a church pew as a reference to the homeowners’ faith, photo by Vance Fox

“We’d sometimes have conference calls at 10 or 11 at night. It would be morning for them,” Eberhardt says, adding that, because of the 16-hour time difference, it could be difficult to get answers right away. Fortunately, the Wilkersons trusted their team. “They gave us full rein to use our own judgment to make decisions during the project.”

Patrick McEnany and his High West Landscape Architects team were given a similar green light on the exterior.

“The owners who live in Hong Kong gave me the impression they weren’t exposed to much color diversity, and so they were all for a broad color scheme, which we gave them. It will be exciting to watch it all come alive in the spring when the colors start to pop,” says McEnany, who used numerous varieties of short-growing plants in the back of home as to not block views.

The backyard also includes a lush lawn with a stone paver path and a large patio with a fire pit, seating and barbecue station, with terraced landscaping and a granite retaining wall beyond.

“The wall was an important feature, as we wanted it to look like it had been part of the site for years, as if it were a historical site element to preserve,” says McEnany.

In this highly customized home, the Wilkersons’ passions and beliefs came into play throughout the build. Before construction commenced, the couple had a Catholic priest bless the land. “It gave it a special energy,” James says.

The feeling was palpable. “All the subs really put their passion into it,” Collin says. “They came up with ideas and that enthusiasm transcended to everyone.” It wasn’t just the workers, either. In the home—partway through the build—Collin proposed a second time to Andrea.

That energy still fills the 5,662-square-foot house, which is more than just a building, but a homestead for the Wilkersons and their children. After about two years, construction finished in June 2019. Now, when the children have a break from school, the family makes the 7,000-mile trip from the dense, bustling metropolis of Hong Kong to the vast, open spaces of Nevada. For a family who could have chosen any region of the globe, the mountainous acreage of Clear Creek Tahoe is the place they want to call home.