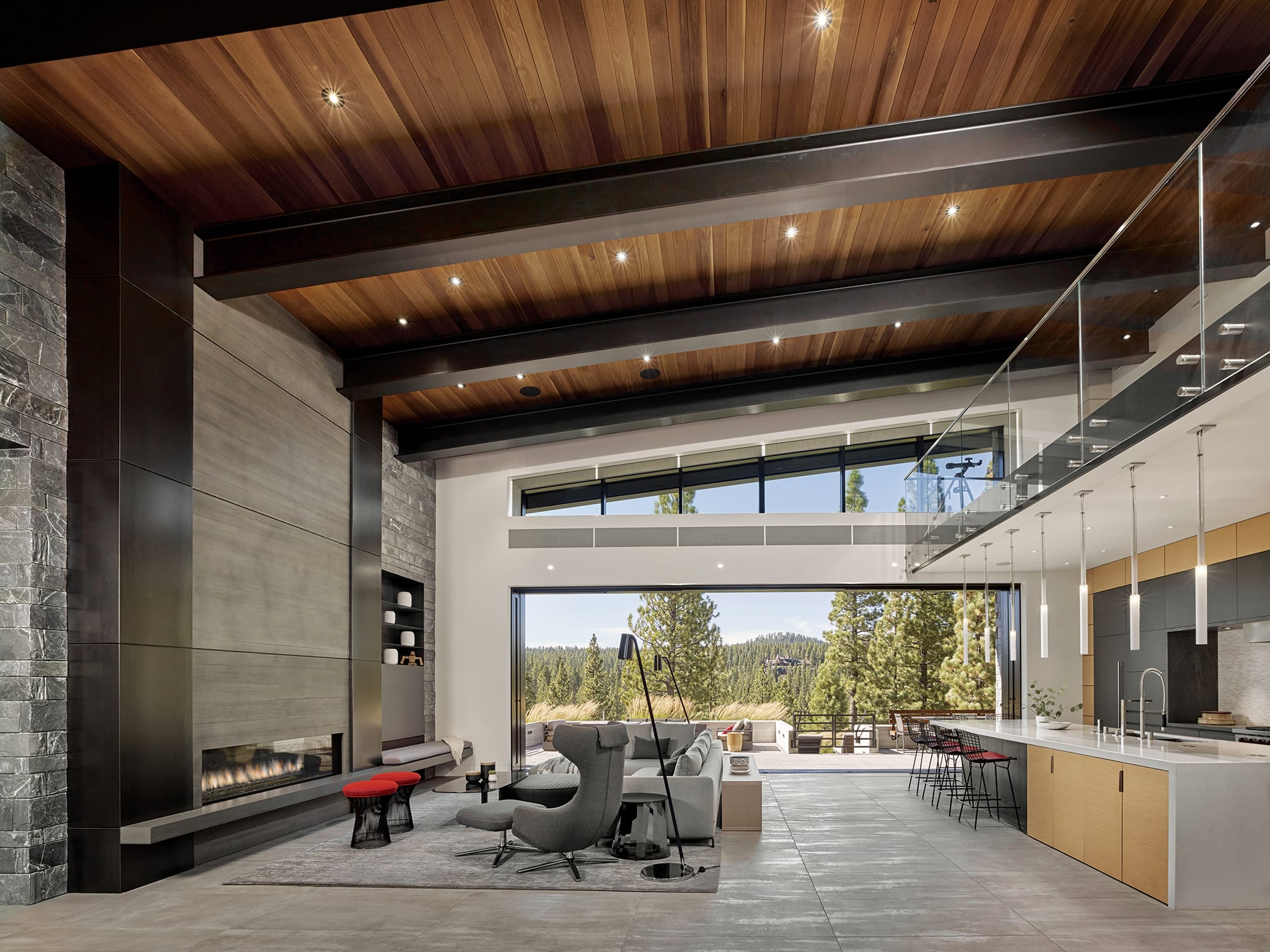 The airy gathering room features a 28-by-10-foot pocketing window wall, along with ample rock and steel, porcelain tile floors and a concrete fireplace

Far above the 13th fairway and across the woodsy creek corridor from the Martis Camp Lodge, a rather perfectly sited, beautifully designed and exquisitely executed mountain home rests on a boulder-strewn hillside.

The Las Vegas–based owners unknowingly started the project following a consultation with Keith Kelly, principal of Truckee’s Kelly & Stone Architects, whom they contacted to discuss a potential remodel for their decades-owned Incline Village residence. 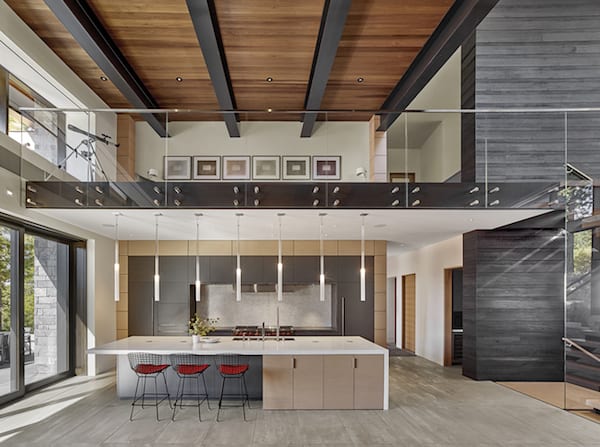 Located beneath a loft that overlooks the gathering room, the well-appointed kitchen includes Wolf and Sub-Zero appliances and a Caesarstone island set under Spyglass pendants by Sand Studios in San Francisco

The evolution of that initial conversation eventually led them to Martis Camp and an enticing piece of property that resolved many of the major concerns they’d held about how a house might successfully relate to neighboring properties.

“I liked this lot because it’s sort of proud on the hillside, so I never felt like we’d be impacted by the neighboring lots,” says the owner. “Also, we had certain rules: We didn’t want to look down on another house or a road, and we didn’t want an uphill house to look into our house. And that’s exactly how it worked out. We’re not perched up high but sort of melted into the site.”

“A very high and committed level of communication between the three of us and our companies is what it took to build this house,” says Schacter. “Without that level of teamwork, it wouldn’t have happened.” 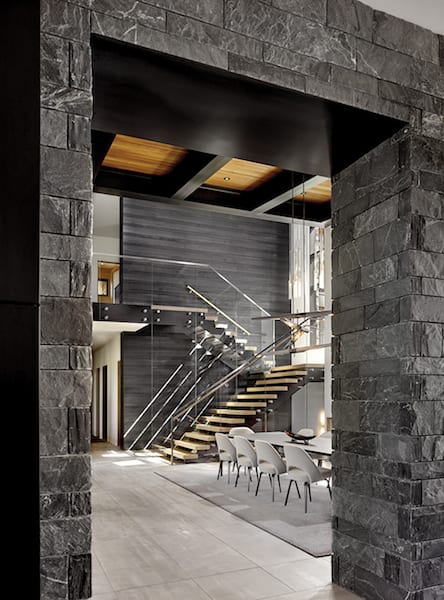 An opening through a Pacific Ashler stone wall leads to the gathering room and dining area, where an open staircase of steel, glass and oak is set against a charred cedar wall

The owners worked extensively with the entire team as the design developed, knowing they wanted something modern, but not cold or austere. Also, after spending summers in Tahoe for nearly two decades, they were clear on their needs: a house that maintained a compact feel when they are there alone, an offering of spa-esque and just-secluded-enough guest quarters for the many friends who come to stay, and an upper level of guest spaces when their children and grandchildren visit.

What they got was a home employing stone wall masses as zoning elements to separate public and private areas, allowing the house to function optimally regardless of occupancy. “We have the ability to open up the house depending on the function we need and still be comfortable,” says the owner.

Precast board-formed concrete, dramatic blue-veined quartz stone veneer, clear cedar siding, plenty of steel and an acre of glass come together in an assembly defined by distinct shed roofs. The entry procession begins at the auto court as the house—through which beautiful vistas beyond are teasingly glimpsed—beckons guests down the hill. Stepping into the entry, the window wall opposite the door offers only a peek of the openness to come.

“They didn’t want to give the view away when you walk through the front door,” says Kelly. “The entry sequence is set for just a teaser view enhancing the anticipation of arrival.”

However, beyond the foyer, through an opening in a monolithic stone mass, the airy but chic and sophisticated gathering room awaits, with a 28-by-10-foot pocketing window wall framing views across the golf course to the Martis Camp Lodge.

Paquin deftly balanced the aesthetic of the gathering room with shou sugi ban (an ancient Japanese technique that preserves wood by charring it with fire), giving an anchor to the open stair that threads three floor levels between the wine cellar below the main living area to the loft and upper level on top. The blackened cedar wall provides just the right visual contrast with the weighty stone mass and concrete fireplace on the opposite wall. 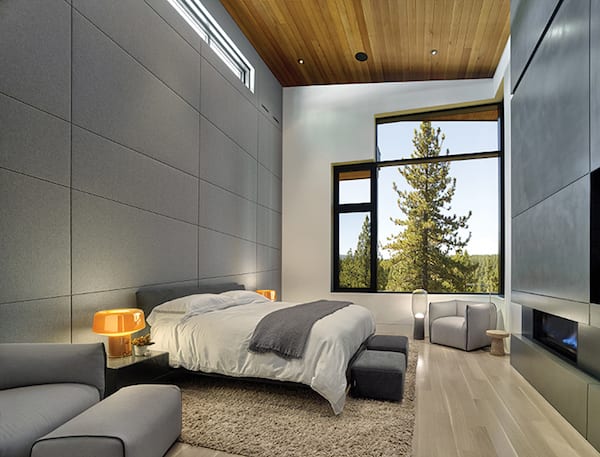 “I had a clear description of the outcome the owners were looking for,” says Paquin. “They wanted luxurious and family-friendly finishes and they wanted the gathering room in particular to be bulletproof in terms of the kids.”

Throughout the almost 7,000-square-foot home, the detailing on every surface remains impeccable, sophisticated in concept and exquisite in execution, much of it introduced by Paquin, a self-described minimalist. Even the relationship between glassy shower tile and the flawless smooth sheetrock beside it was not left to chance. The two materials are perfectly coplanar, the line between them barely perceivable, an outcome painfully difficult to achieve.

Schacter laughs as he recalls that specific detail. “I’d never seen the word ‘coplanar’ on a drawing. I thought it was a misspelling. Now it’s the big word in the company.”

“There’s not one element that needs to be on its own, standing out,” says Paquin. “I feel that it all needs to be tied together. And having a guy like Gabe building the project, I know it will be done right.”

Walking through the house with the design team, some of the more challenging pieces and places are pointed out and descriptive stories unfold in confidently knowledgeable tones. For instance, how the beautiful stair, with its inch-thick steel plate stringers, came in pre-templated pieces shipped from Canada to be craned through a huge window opening and put together like a “giant, life-sized puzzle,” per Kelly. 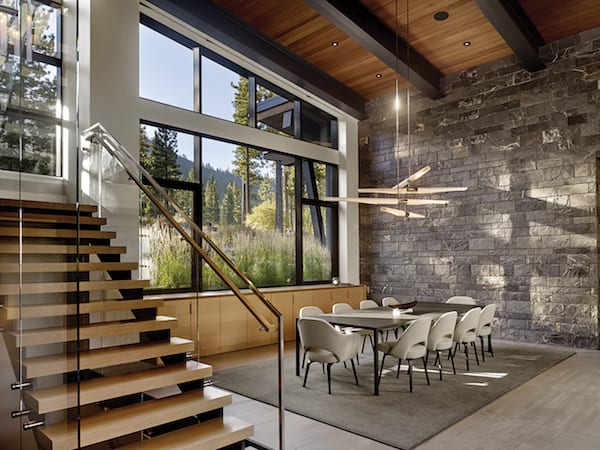 “Gabe had template upon template to get it just right,” says Marsden. “There was a lot of time that went into those details and thoughtfulness that everyone had from the design to the execution. That thoughtfulness and execution make it a jaw-dropping feature of the house.”

Much discussion was also had about an essentially blank corner of the stair landing that hides a reverse Jenga complexity of systems beneath the drywall.

“There’s a structural steel post in there that had to align with pocketed window shades, drywall, window reveals, a steel beam, the exterior siding—and it all had to be worked through before we could even come off the concrete,” says Schacter. “I spent hours in the KSA office with Ryan working through it and you don’t even know it when you walk up there.”

“Those kinds of considerations are what make the project stand apart,” says Marsden. “It’s the level of execution. Without that, the project wouldn’t be what it is, much to Gabe’s credit.”

The full-immersion-style working relationship with the owners made clear their desire for the same level of seamless execution, and the entire design team speaks of the owners’ unwavering commitment for doing it “right” and their thoughtful, inclusive level of participation. 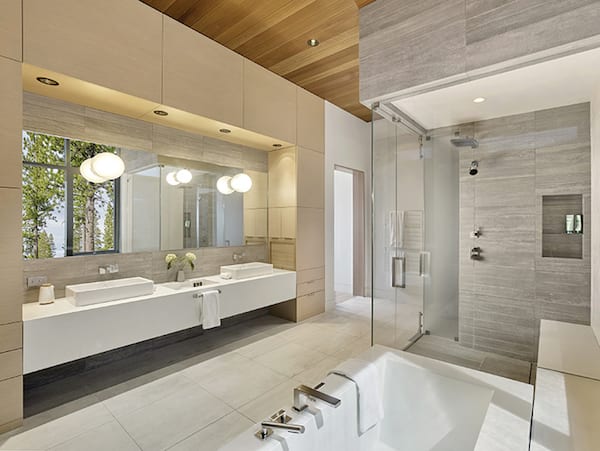 “There are details in this house that nobody else would do,” says the owner. “There’s so much perfection here. We wanted the house to be done right, and it was.”