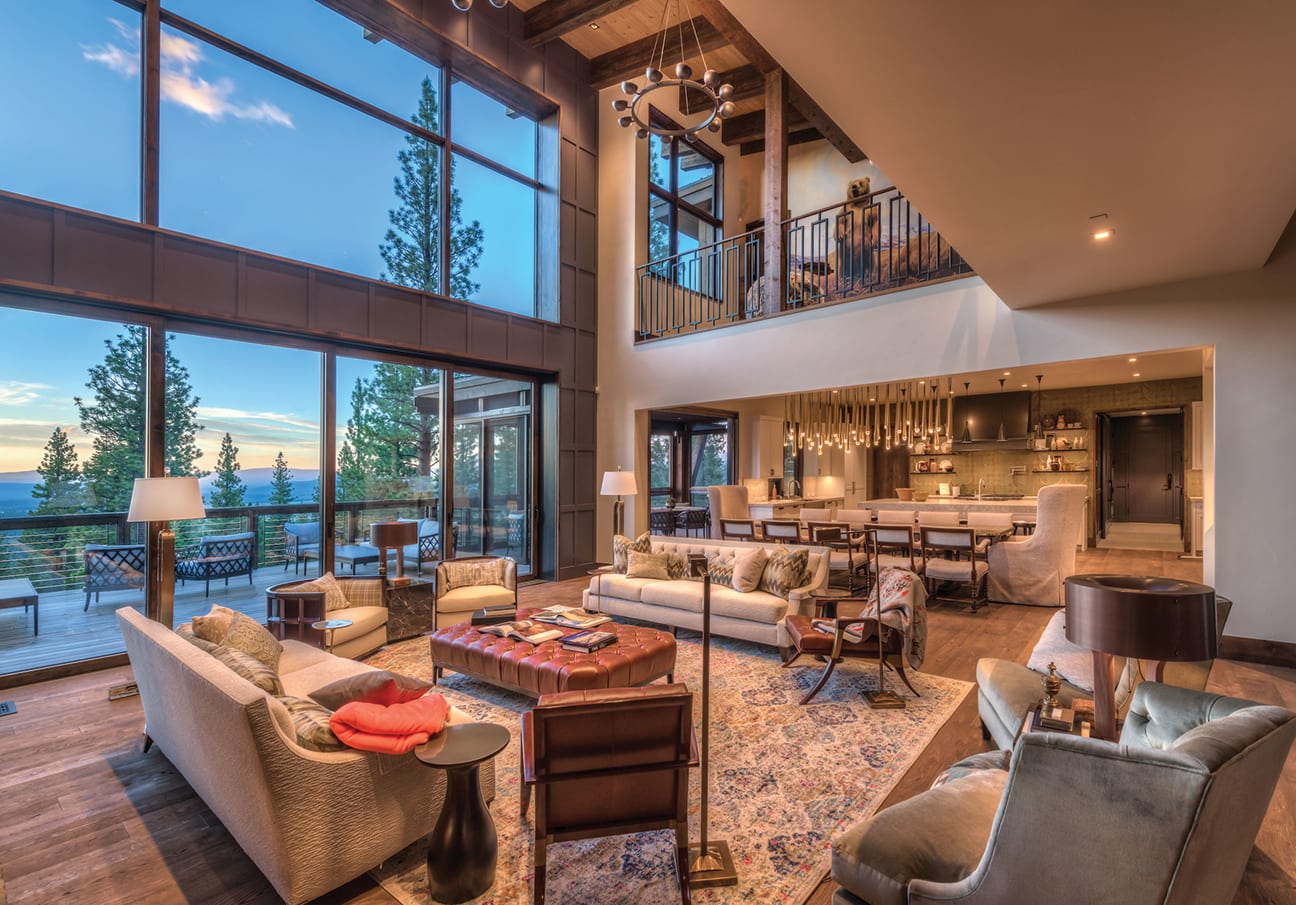 Built for a family with a love for social gatherings, this Martis Camp home invites everyone to have a good time 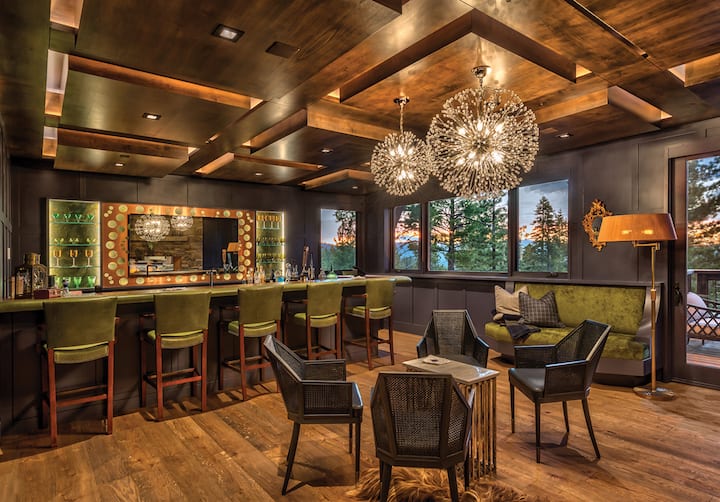 The bar was designed to feel like a classic Irish pub with its own unique flair, with a TV mirror set against a copper backdrop, pops of lime green, dandelion pendants and a coffered ceiling with recessed lighting

When designing a home for people who like to party, you start with the bar, naturally.

At least, that’s how it worked out for the project team of SANDBOX Studio, Mark Tanner Construction and Scott Corridan Design, who collaborated with a Bay Area couple to create a Martis Camp retreat centered around the family’s fun-loving, festive lifestyle.

“The bar was the single most important space in the house. There was no uncertainty about that,” says Corridan. “The client is a true Irishman, and the family is very socially busy and has a lot of friends within Martis Camp, so he wanted a place in his home for a pub, basically. Once that bar was designed and spec’d out, then the rest of the house followed in tow.”

The married couple with two pre-teens initially had a small guesthouse built on the lot, which abuts the forested slope of Northstar’s Lookout Mountain and features sweeping views across the Martis Valley to the Carson Range. When it came time to build the main residence, in 2015, they swayed from their original plans for a traditional design, opting instead for a mountain modern home with a soaring great room, large quantities of steel, timber and stone, and ample glass to capture views. 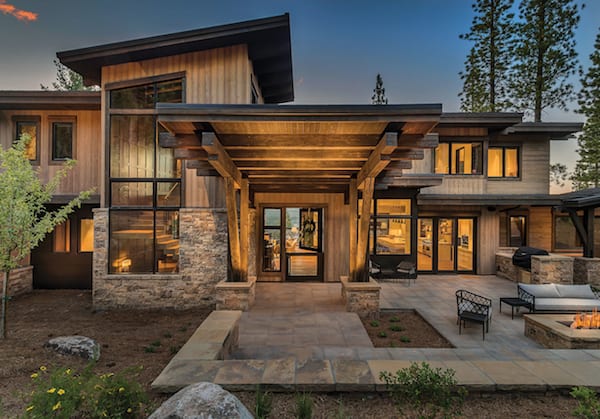 The front of the home features a custom floating staircase framed through full-height windows, as well as a large covered entryway and glass Dutch pivot door, barbecue and lounging areas, and landscaping and hardscaping by Hill and Dale Landscapes and High West Landscape Architects

“We deemed the project ‘The Irish Lounge,’” says Mark Tanner, who also worked with SANDBOX Studio on the guesthouse.

Completed in May 2019, Tanner describes the nearly 8,000-square-foot home as a “sophisticated speakeasy,” with deep colors accented by natural stone and highlighted with bright metallic fixtures and pops of color.

Nowhere is this more prevalent than the bar. Partially separated from the living room by a massive double-sided, see-through rock fireplace, the room evokes a classic Irish pub vibe with modern twists.

Behind the bar, a large mirror, set against a shiny copper backdrop and flanked by green-backlit shelving, is actually a TV. Lime green barstools and built-in seating that resembles church pews contrast with dark custom wall paneling. Wide-plank oak flooring warms the space, while windows take in the surrounding forest and mountains. Perhaps most distinct, the stained alder ceiling above is coffered, with intricate recessed lighting glowing from within.

“There was a time when those were going to be automated, and when live music was playing, the ceiling coffers would pump up and down with the beat,” says Corridan. “But Tanner priced that out and it was ridiculous, so we didn’t do that. But we maintained the different ceiling heights within those coffers to give the illusion of movement and play. It also buffers noise in that space.” 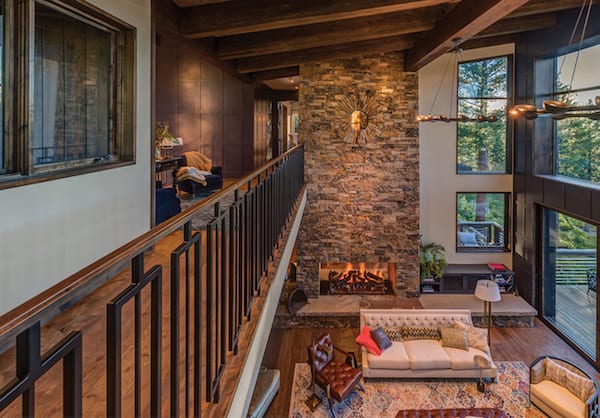 An open bridge walkway runs the length of the great room, where a large rock fireplace features an Irish “moongate” detail by Diaz Masonry

“It almost looks suspended,” Tanner says of the coffered ceiling, from which two sparkly dandelion pendants hang, bolstering the room’s swanky charm. “I’ve never seen anything like it before.”

As temping as it may be to linger in the bar, other fun and well-executed features abound throughout the home, as well as subtle nods to the owner’s Irish roots.

For the extensive stonework that continues from exterior to interior, Tanner’s team sourced Montana Moss Rock to match the color of rock from Ireland. Circular details found in Irish fields, called “moongates,” also appear on the rock fireplaces in both the main home and guesthouse.

“It’s actually an arch in the Irish fields,” says Scott Gillespie, principal of SANDBOX Studio. “The owner wanted to weave some of his heritage into the design, so we took that and came up with the circle. I think it worked really well. It’s kind of a fun play on it.”

Rock mixes with western red cedar on an exterior defined by multiple shed roofs. Front and center, just left of the large covered entryway, a towering wall of glass frames a floating staircase of oak and steel that switchbacks through all three levels of the home. A striking light fixture cascades down the open space of the stairwell, which was engineered to house a freestanding glass elevator in the future.

“We wanted to pull in light on that south side of the house, but also, it was a way to create a dramatic architectural element on the front elevation,” says Gillespie, who designed the stairs with Tanner’s team. “We wanted something on the front that would put an exclamation point on the design.” 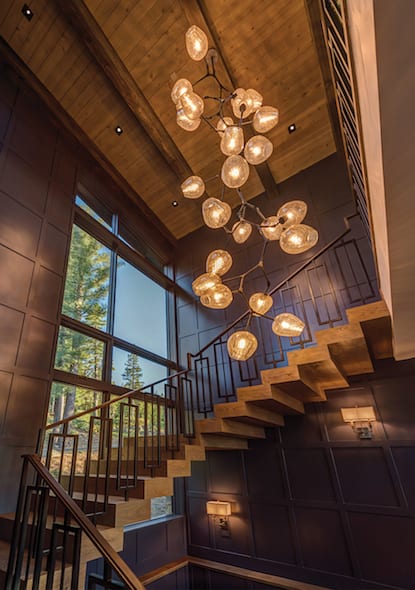 A light fixture by Wired Custom Lighting in Los Angeles cascades down the center of the floating staircase, which was engineered to one day house a freestanding glass elevator

A glass Dutch pivot door ushers guests into the spacious interior. Straight ahead, the ceiling above the living room gradually rises to its 24-foot apex along the opposite wall. A Weiland lift-and-slide door and aluminum-clad Sierra Pacific Windows fill the entire space, bringing the outdoors in and affording prize views. An elevated deck with plush furniture awaits beyond.

The voluminous living room flows into the kitchen on one side and is anchored on the other by the stone fireplace, the eye of its moongate pattern looking over the room. The kitchen opens through a bifold door to a completely screened-in covered deck, protecting its occupants from buzzing (and biting) critters that can quickly ruin an outdoor dining experience.

“During the design stage, we had that bad year with the meat bees (yellow jackets). If you were outside you couldn’t eat because they were attacking you,” says Tanner, explaining how the experience led the owner to opt for the screened porch, which then became a “full outdoor entertainment area” with music, TV, barbecue, refrigeration and seating.

Back inside, an open bridge walkway at the top of the stairs—its steel stringer railings matching the stair rails—runs the length of the great room below. A left turn leads to the master suite. A right leads to the kids’ wing. On the wall stretching between the children’s rooms, directly above the kitchen, a life-size scene featuring two grizzly bears in a mountain setting commands the space.

“It was the clients’ inspiration to bring in wildlife, and then it was Scott Corridan’s idea to get a picture of a bear printed on wallpaper,” says Tanner, adding that a company in North Carolina called Limitless Walls created the wallpaper. “It took about five months to get it all figured out, but it was something that was really unique and fun, and now we know that it’s out there. You can pretty much take a photograph of anything and have it printed on wallpaper. It’s cool and really personable.”

The same company printed wallpaper for the boy’s room from a photo of the Skellig Islands, located off the southwest coast of Ireland and featured in two recent Star Wars movies. 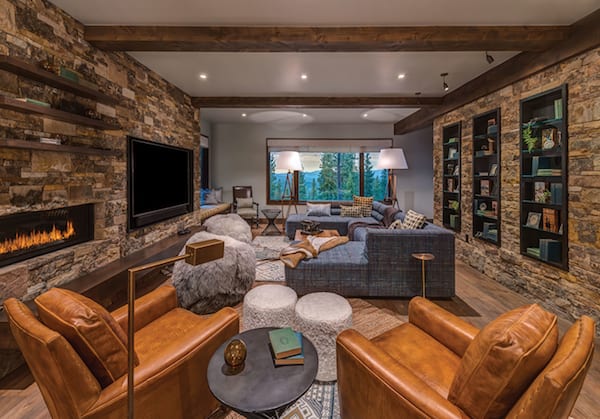 “That was inspired by [the boy’s] fascination with Star Wars, but ironically, the town that the client grew up in had a direct view of the Skellig Islands,” says Corridan. “So it was a real treat to tie those things in together for father and son.”

Corridan’s influence is evident throughout the interior, from custom light fixtures to space planning and select architectural elements. He worked extensively with Stephen Reitter, Tanner’s finish field superintendent, on the execution of ideas, and credits the owners for trusting him to run with his creative freedom.

“What I love about clients like that is it frees me up to listen and absorb them and then really just go excel,” says Corridan, who is also working with the owners on their primary residence in Tiburon.

While the finished product is something the entire team is proud of, it was not without its challenges. Tanner says they discovered during excavation that the property is littered with natural springs, which required sophisticated (and painstaking) waterproofing and drainage systems to be installed before construction commenced.

But the work paid off, allowing for a below-grade basement level that is among the standout features of the home—with a sauna, conditioned glass wine display, air hockey table, exercise room, and stonework with built-in shelving, a fireplace and TV.

“It’s really livable, but also unique,” Tanner says of the downstairs, “and that’s typical of the owners. Everything they did in the house is fun and whimsical.” 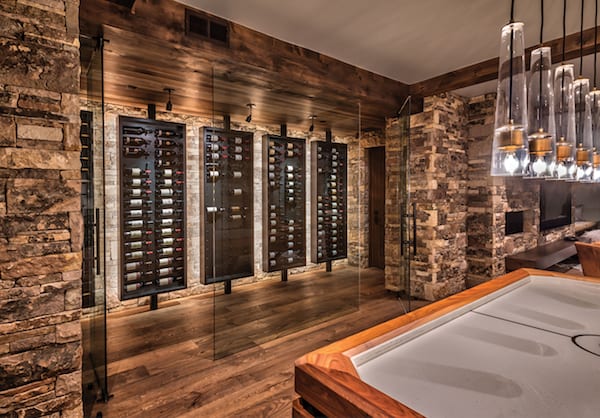 The lower level includes a conditioned glass wine display and air hockey, among other fun amenities