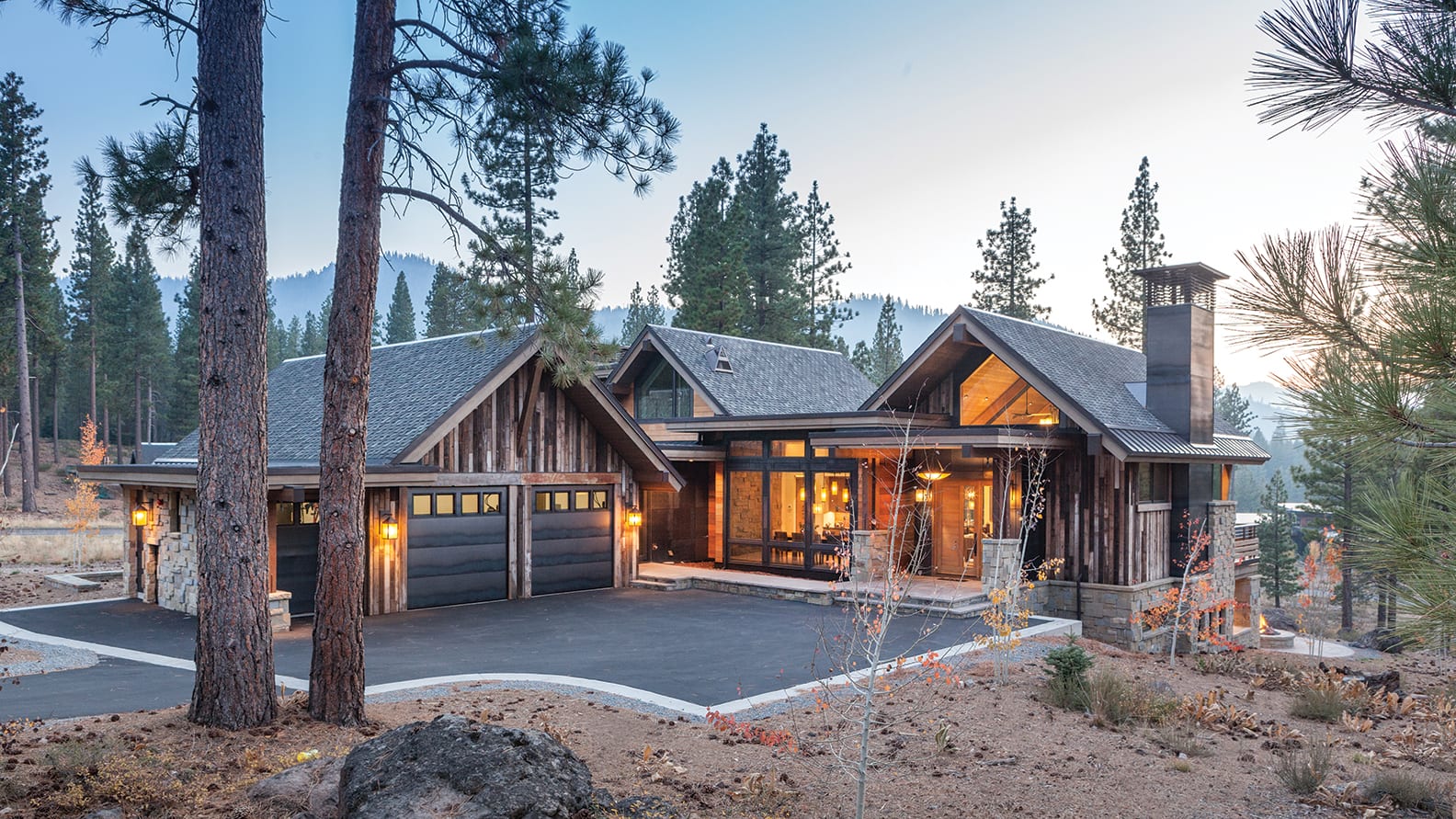 Tradition With a Modern Flair

Located on a corner lot in Martis Camp, the Hermitage House is a timber-and-stone treasure that offers elevated panoramas of the Sierra Crest. The owners—a married couple with a young son—envisioned a transitional-style mountain home that felt contemporary without being over the top.

“The home reflects on the historic Tahoe aesthetic,” says Keith Kelly, principal at Kelly & Stone Architects (KSA). “It has gabled roof forms for the primary elements, reclaimed siding and rustic stone. But it also has accents and materials that lean more toward the contemporary side, and a much cleaner aesthetic than you would see on a truly traditional Tahoe home.” 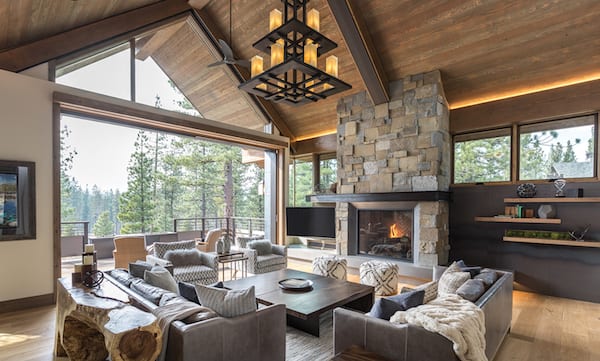 The great room opens through a large lift-and-slide window wall by Cantera Doors, which frames views to the Sierra Crest

By blending traditional elements with a modern aesthetic, Kelly created a regal residence that shows what the modern mountain home has evolved into.

Spread across more than 5,000 square feet, the five-bedroom house captures striking alpine views from every possible angle—including a unique, direct perspective of Tinker Knob and its surrounding backcountry immediately upon entering the front door.

Views throughout the home were framed carefully to maximize light and connection to the outdoors while ensuring privacy. “We wanted to maximize the all of the distant mountain views while also affording privacy to the owners and creating a buffer from the public nature of a corner lot,” Kelly says. 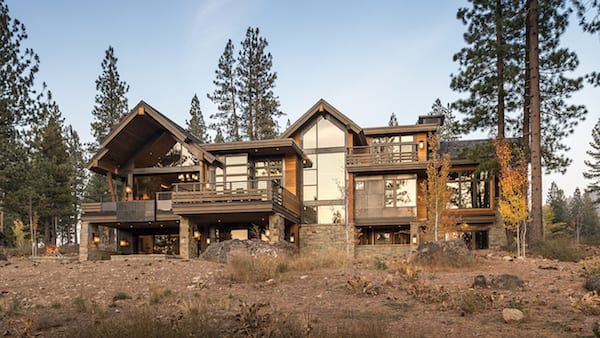 In the great room, the floor-to-ceiling stone fireplace was positioned strategically to block potential views of a neighboring home. The fireplace is flanked with elevated windows to let in natural  light while maintaining privacy.

“The challenge was, how do we create spaces that maximize the indoor-outdoor connections, yet ensure that there is a sense of privacy given the nature of a parcel located on a corner lot with adjacent street frontages on two sides?” says Kelly.

“Indoor-outdoor connectivity was paramount,” he says. “The great room flows out onto an upper deck, and the game room downstairs flows out onto a patio. They’re designed to expand the square footage of usable space in summer and winter, and that’s a theme throughout the entire house.” 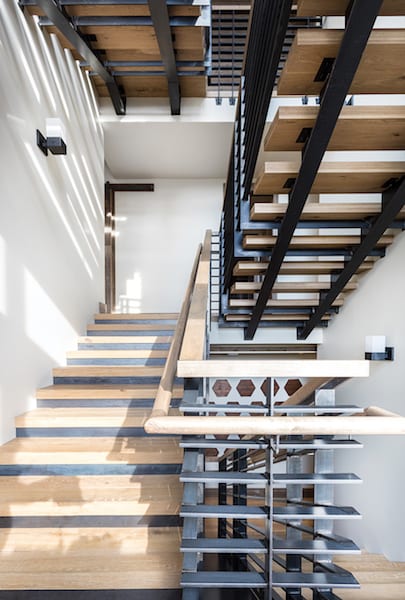 A steel-and-timber staircase designed by KSA serves as the core of the home—and as a stunning centerpiece in its own right. Featuring open stringers and floating hardwood treads, the custom-fabricated sculptural staircase connects all three levels of the home.

“The clients wanted the home to be a little more mountainy than modern,” says interior designer Julie Johnson-Holland, owner of Interior Design by JJH. “So there’s a lot of steel and exposed beams and more modern elements in the architectural that is softened with wood and stone.”

Knotty alder wood trim and oak flooring were used to make the interiors feel warm and inviting. The gourmet kitchen features brushed oak cabinetry and a large center island that shows off a live-edge walnut top trimmed with metal.

“I paired rough materials with smooth ones by adding metal,” says Johnson-Holland, who also picked out all of the furniture and furnishings for the home.

From the kitchen backsplash to a console table made from a burrow root to custom-made wood-and-metal coffee tables, Johnson-Holland used subtle touches of texture throughout to make the home feel modern without being too cold or sterile. She livened up the master bedroom with a geometric cowhide rug; in the guest master, she opted for a reclaimed wood bed and tree-lined wallpaper that mimics the trees outside.

“I used brushed wood and metals throughout to create some natural texture,” Johnson-Holland says. “When you’re standing in the space, you can feel the texture.”

Since both clients are busy working professionals, they specifically requested a home office that would offer ample privacy and quiet for any calls or projects they needed to work on. They also decided to outfit the garage with an open-framed vaulted ceiling and a half-court for their basketball-loving son. 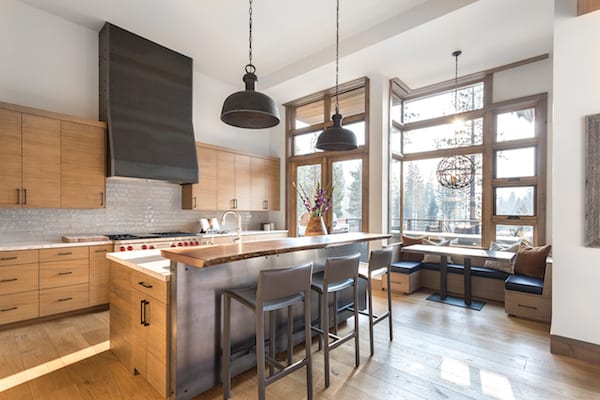 “We took the garage and made it into more than just a garage; it’s an entertainment space that can be used year-round,” says Kelly. The garage doors were custom crafted using aircraft hangar door mechanisms that allow them to tilt out and up, removing any obstructions from the interior space and providing wide-open access to the outdoors.

The great room and kitchen flow through a lift-and-slide window wall by Cantera Doors to a large elevated deck, effectively doubling the size of the primary living areas and drawing guests toward the stunning Sierra Crest views.

Similarly, the well-appointed game room below opens directly to a built-in outdoor living area with a fire pit, hot tub, and both covered and uncovered outdoor living spaces. This area transitions seamlessly into the natural lay of the land thanks to carefully placed granite boulders from the property that were repositioned during construction.

“As you look at the house, you will find stacked stone walls that stretch out beyond the footprint of the home,” Kelly says. “We used those walls and other material transitions to help transcend the lines between the outdoors (which is naturally rougher) and the indoors (which is fairly refined).” 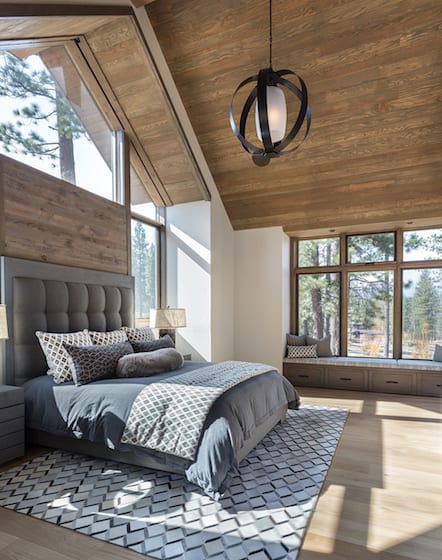 The end result is a functional and inviting home that redefines what mountain living can look like.