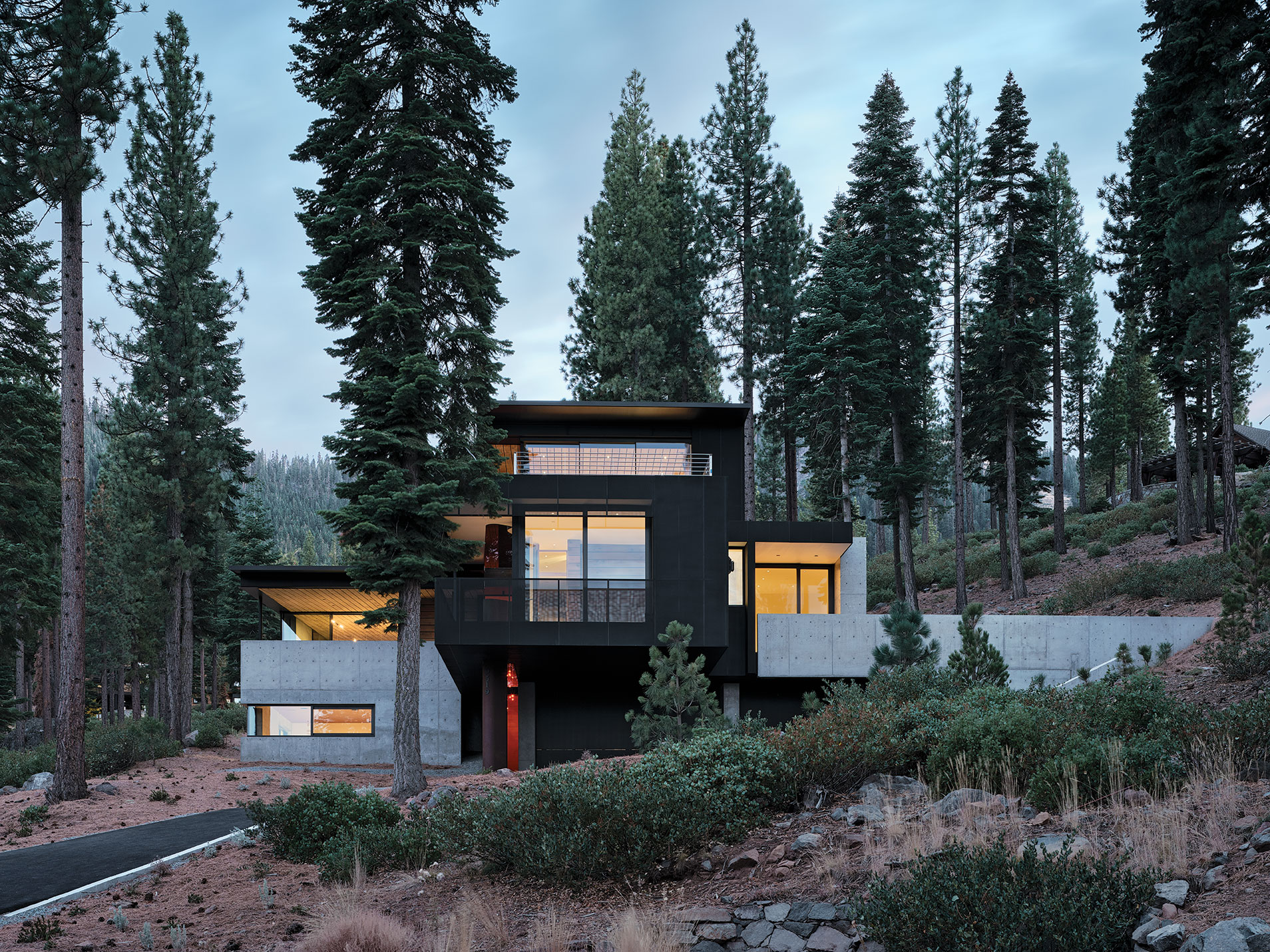 A concrete base embeds the home into the 20-degree slope. Raw CORTEN and painted steel cladding also protects the home from the harsh environment

A Home to Behold 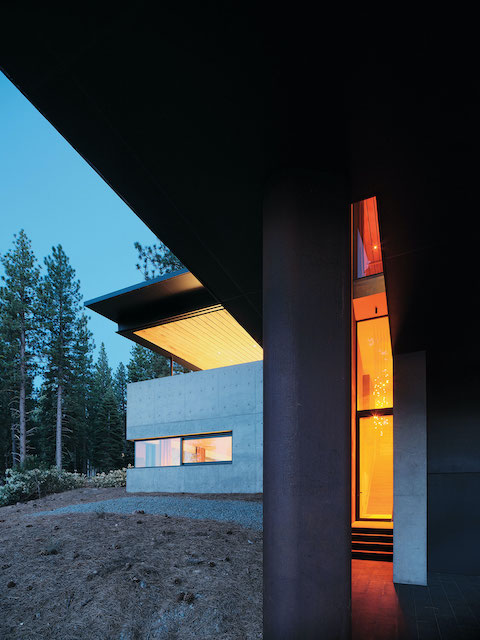 The home’s entry is sequestered in a slot-like opening bracketed by a massive concrete wall on one side and an angled CORTEN wall on the other. The entry door is integrated into a three-story-tall slab of red glass 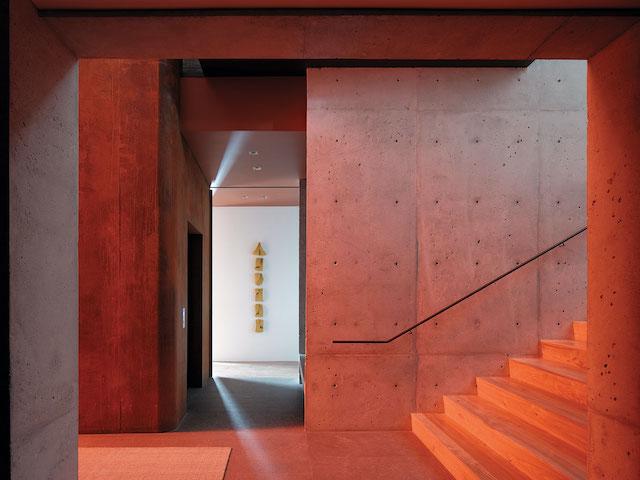 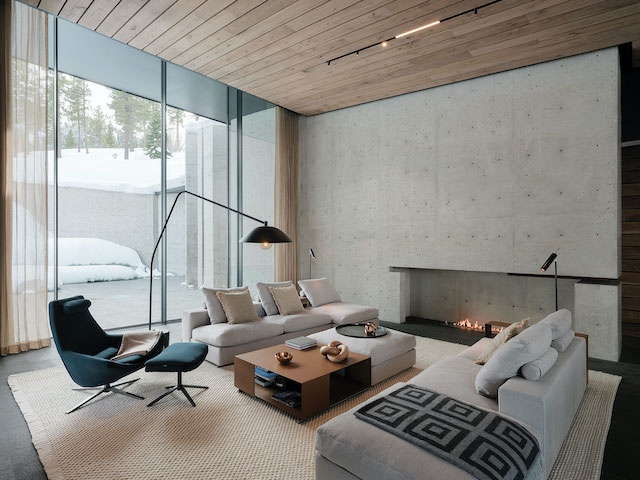 Panelized concrete extends without interruption between the gathering area and south terrace, where 16-foot-tall ApexFine motorized doors reach wall to wall and floor to ceiling. A gas fireplace is set at floor level and simply notched into the wall 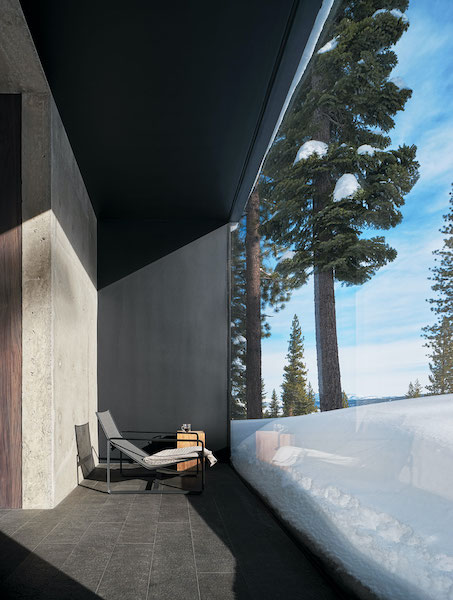 The sun nook, composed of concrete, steel, glass and basalt flooring, allows for a peaceful pause just off the main gathering area and emersion into nature without stepping out the door 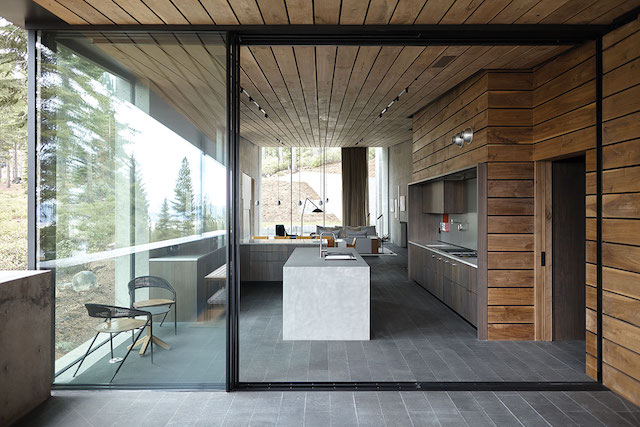 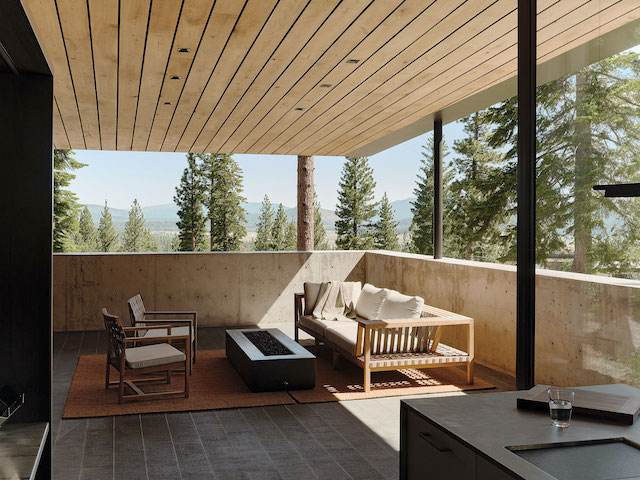 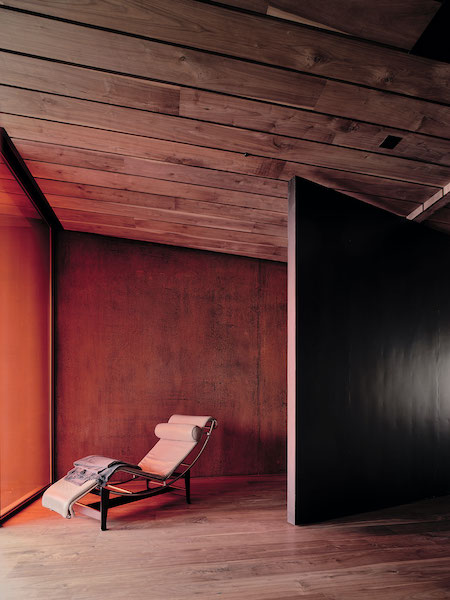 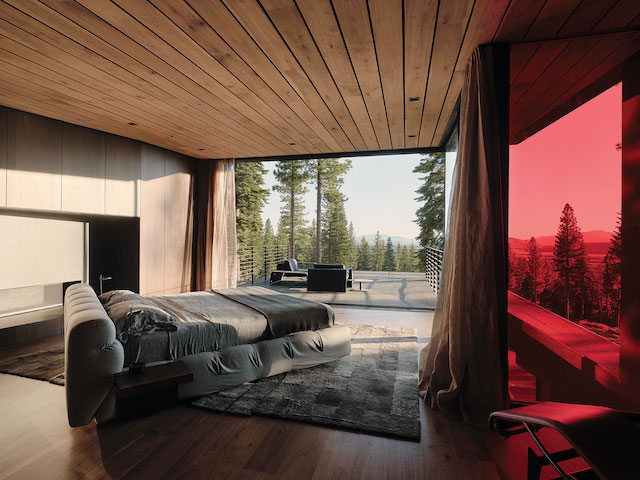 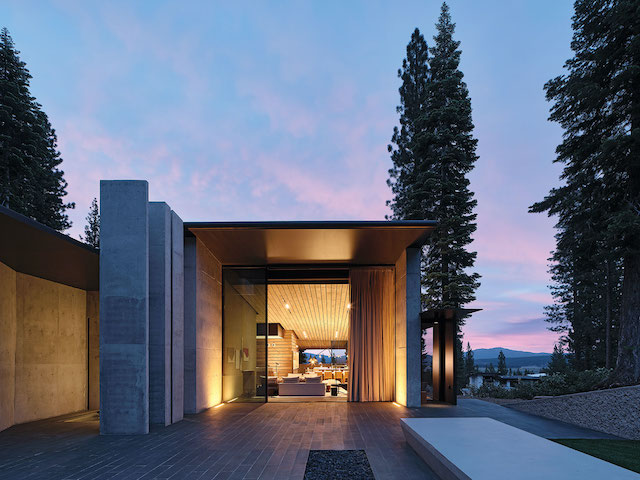 Full views through the home and beyond are offered from the south terrace, which includes an in-ground fire pit that is flush with the basalt tile surface and a Diamond Spa discretely pocketed to the side behind concrete pillars that are designed to enhance the changes in daylight while creating privacy

The ingredients composing most homes are a forgone conclusion—kitchen and bedrooms and space for bathing, all connected via standard-width halls and openings—and even with the most jaw-dropping pieces of property, there remains a basic understanding of what will be encountered. Sure, there might be some nice stuff, but coming across something that takes you by surprise? That is a rarity.

On approach to a Greg Faulkner-designed Martis Camp home planted in a north-facing slope, hints suggest that perhaps some ingredients have been used differently in this architectural dish.

For starters, the elusive entry sequence is absent the expected and often shameless flaunting of a grand, gesturing front door. Instead, after gently winding around a tall, curved CORTEN wall and into a tight passage reminiscent of a deep slot canyon, it’s not entirely clear that this is even the right way to go until this crevasse splays open a few degrees more to reveal the entry point—a three-story slab of red glass.

“The rusted steel plate represents the site/earth cut in section and one enters between the concrete wall of the house and the earth—a fully immersed feeling of connection to site,” says Faulkner. “We feel a bit pinched and then are relieved when our sight is allowed inside through the red glass.”

The steeply sloped, roughly 1.5-acre building site is comprised of 3-million-year-old volcanic remnants from nearby Mount Pluto. The open spaces between boulders scattered across the hillside seemingly suggest a template for the huge sheets of glass interrupting the panelized concrete masses that now inhabit the site. The angle of the quarter-inch-thick CORTEN steel roof parallels the slope, and the level of material durability is a response to the exceptional demands of the environment—wildfire, 600-plus inches of snow in some years, high winds, intense sunlight.

The unique challenges introduced throughout the more than three-year build repeatedly tested and pushed general contractor Andreas Rickenbach to perform acts of construction magic that he had not conjured on any previous project: designing and fabricating a fully custom hangar-style garage door from scratch; ensuring that the hundreds of yards of concrete poured emerged from the formwork nearly perfect; orchestrating 14 guys to hand-carry an 11-by-16-foot pane of glass and gingerly install it between unmoving concrete walls with close to zero dimensional tolerance.

The ostensibly unflappable Rickenbach discusses these events in a way that masks the magnitude of challenges, never really giving away how difficult it all really was, calmly and simply saying that many of the experiences were “intense.”

With the home essentially infused into the site, Faulkner arranged 7,800 square feet between three levels, distributing living spaces as territories along a three-dimensional access zoned for service and circulation.

Beyond the scarlet glazing of the entry point on the home’s lowest level, a small lobby opens to an intersection offering various destinations. A family room is located on one side, a laundry and ski room on the other, and a set of walnut stairs bracketed by cool, smooth concrete directly ahead ascending to the main living areas—a “way up and into the south light,” says Faulkner.

Arrival on the second level offers a choice between the bedroom wing in one direction or moving toward the expansive, daylight-filled public space. The pivot between snug and soaring is most present in this gathering area (cooking, eating, living) as the home possesses both womb-like refuge and a midair treehouse aspect.

“The house is laid out so nicely, when you stand in the living area, you can look up at the mountainside or turn around and look out over Martis Valley,” says Rickenbach. “It’s pretty spectacular.”

The kitchen is a composition of HenryBuilt cabinetry integrated with top-shelf appliances, and the floor-to-ceiling walls of glass on both ends of the gathering area open at the touch of a button, allowing the mountain breeze to circulate through the house and pull in the warm stitch of summer days.

An open courtyard looking up the mountain reaches into the native landscape and spills the hillside back into itself. A more sheltered terrace area on the opposite end of the room is capped to frame the Martis Valley vista beyond into a postcard-worthy aperture.

“Our style of living is to be together as a family as much as we can,” says the owner. “The huge open living concept makes this possible. Also, we can open up the north or south window walls to make the main living space feel like a giant indoor-outdoor experience.”

The owners purchased the property in 2013 as an unmarried couple with no children, living full-time in Tulsa, Oklahoma. More than seven years later, they find themselves permanently residing in Martis Camp, now married and with a small son and daughter making their new house “a wild and exciting home filled with the sounds and energy of young children.”

Conveying an implied level of privacy, a stark, relatively narrow stair departs from the main living level, traveling to the home’s uppermost floor—the entirety of which is given to the primary bedroom suite where the owners share a more than 1,700-square-foot sanctuary.

This top level of the home also enjoys the dual personality of lofted perch and safe burrow. A leather-finished wall pivots in place between the bedroom and bathroom zones to modulate the space—fully sequestering the sleeping area or opening by varying degrees to fine-tune a more open-ended, loft-like feel.

“When we wake up, we are greeted with a massive expanse of uninterrupted views across 180 degrees,” says the owner. “It is humbling and exhilarating each and every day we see it.”

Lighting and interior design was provided by Claudia Kappl-Joy of Concept Lighting Lab. According to a 2020 New York Times piece, Kappl-Joy looked to the tones of the immediate natural surroundings and, in particular, the seasonal color changes of the native vegetation, to inform and inspire the refined, understated furnishing selections.

The visual peace of the interiors is buoyed by the actual peace: 20-inch-thick concrete walls sandwich a 3-inch slab of insulation, and with Rockwool acoustic panels also backing interior walls, the feeling is all cocoon and no cavern.

“When you go into a lot of modern houses, they feel cold, and this one doesn’t. There is a warm feeling about it,” says Rickenbach. “I’m proud that we were able to figure out how to absorb sound in the house so it doesn’t echo.”

Faulkner has created an experience in spaces where an “experience,” while not entirely unexpected or wholly impossible, tends to be predictable and limited in its ability to capture imagination or convey spirit. By leaning into the clarity that minimalism makes available and consciously, exclusively using light, form and the quality of materials, inhabitants are better able to focus on the experience of the space rather than the stuff that might be in it.

“The built place, including its appearance, is the product of making a series of experiences that together set the stage for life to unfold,” says Faulkner.

The owner’s more emotive sentiments about the home align with the academic perspective of their architect.

“Until you experience the feeling of being and living inside the house, you can’t fully gather all the emotions and hidden gem moments this home offers,” he says. “You eventually fall in love with it, or at least come to understand and admire such an incredible home, which we feel is like living in a work of art that our little kids can play in and enjoy as they grow up surrounded by nature.”