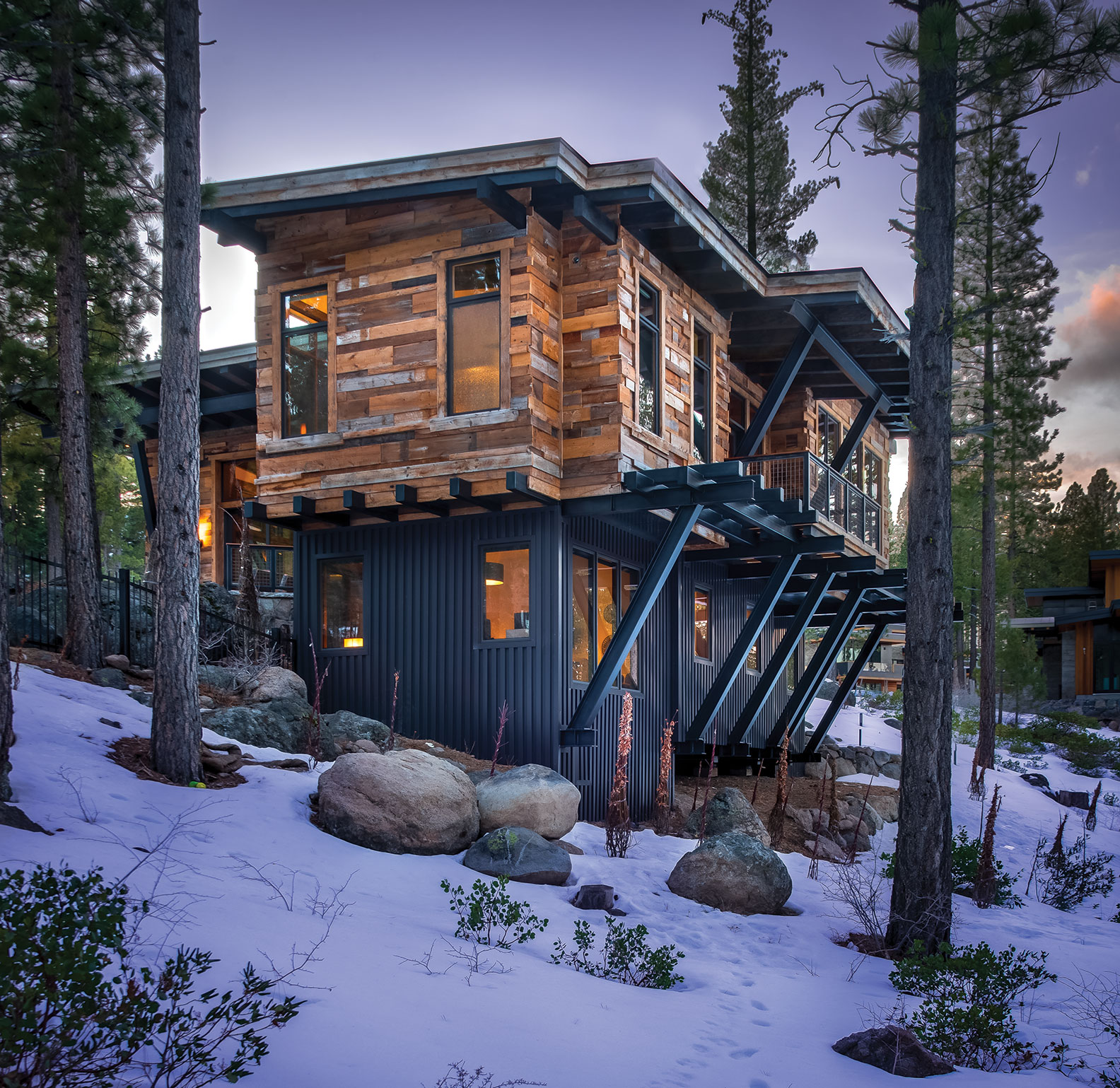 A steep, rocky lot brings out the best in an architect and builder who are game for the challenge 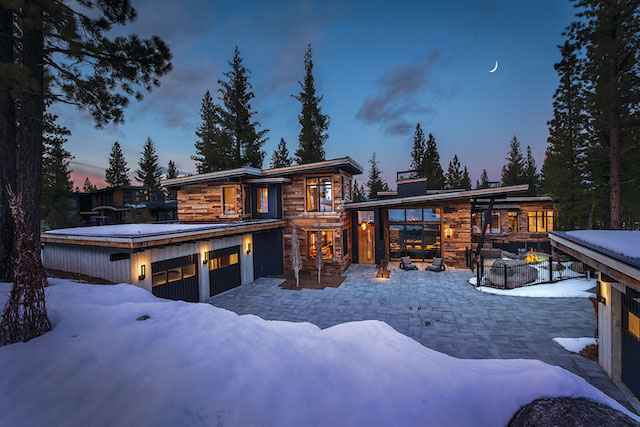 The exterior blends traditional and mountain-modern elements, with shed and flat roofs combining with reclaimed wood siding of various size, color and thickness

Some properties are blank canvasses, open to architectural imagination. Others constrain, challenge and shape structures, demanding something special from architect and builder.

Truckee-based architect Dennis Zirbel found himself looking at the latter in 2016 at the beginning of a multi-year design process. The bottom third of the Martis Camp lot fell away at 30 percent slope. A road embankment constrained the top portion of the property. Large rock outcroppings provided a final natural obstacle.

“We did not have a lot of room to make this work,” says Zirbel, in the sort of matter-of-fact understatement that both perfectly explains, and undersells, the magnitude of the challenge.

Ticking off the biggest challenge first, Zirbel solved the slope issue with an engineering feat that required an enormous amount of steel. He designed a series of steel trusses that cantilever beginning at the foundation, allowing the home to unfold unconstrained by the steep slope. A cantilevered foundation suspends the lower level above the down-sloping hillside, and from that base, the main level cantilevers once again into an even roomier layout. 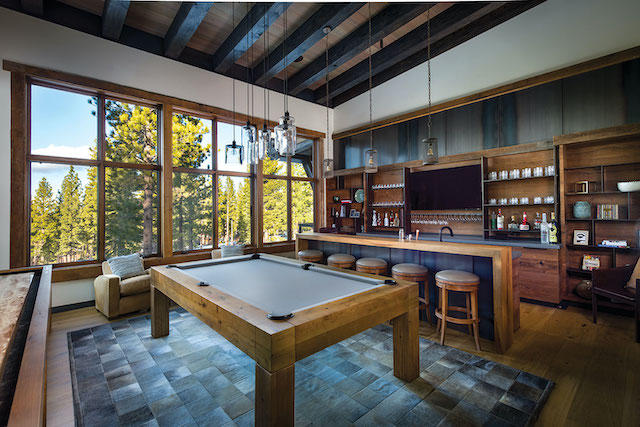 A social room equipped with a bar, pool table and shuffleboard is among the most enjoyed locations in the home

“The steel structure was really challenging,” says Heslin. “Most people can’t appreciate what happened with that cantilever.”

Those cantilevers were the first foundational expressions of a theme seen throughout the project, which came to be called the Wawona Cabin. Three-dimensionality is employed cleverly and consistently throughout the design and build. Natural rock

outcroppings became the basis for a cascading waterfall feature, while a bridge ties the cantilevered structure together. Even the exterior siding is a mosaic of reclaimed wood of every size, color and thickness, providing a texture and depth to the façade that proclaims the home’s dedication to three-dimensional surprises.

“In a nutshell, that was a jigsaw puzzle,” says Heslin of constructing Zirbel’s siding design. “There is no better way to describe that technique. That is a mixture of every width and thickness you can think of. It took a real artisan to install that.” 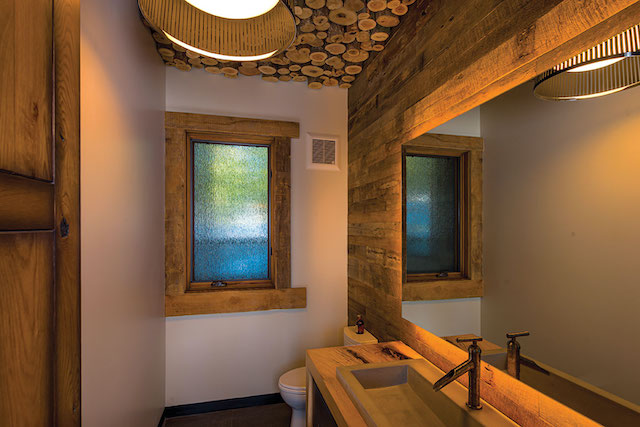 The dedication to 3-D flourishes carried over to the interior, with a show-stopping powder room ceiling constructed of end-cut hardwood branches and trunks. Interior designer Natalie Zirbel, who deftly married mountain-modern interior design with more rustic finishes, says the ceiling was both labor-intensive and immensely rewarding. Gazing up into the ceiling creates an experience similar to viewing the calming contours of a wooden topographical map.

“We hand-selected and hand-cut each one of those pieces,” says Heslin.

This hand-crafted look mixed with more polished details throughout was inspired by modernized chalets in the Alps, a region Natalie and Dennis Zirbel frequent for design inspiration. 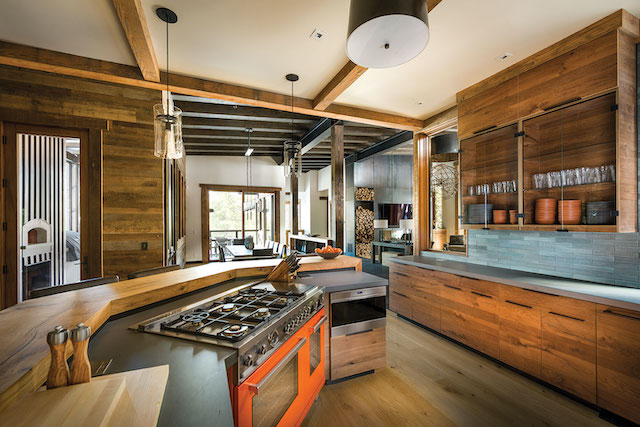 “Overall, the goal was to make it feel like a home in the mountains,” says Natalie Zirbel. “They wanted something that belongs in the mountains and is different from their full-time home. It really is a combination—trying to be rustic and having a modern look as well.”

One of the highlights of the house is a bar room that the owners took particular interest in. With a pool table and shuffleboard, it serves as a gathering place for family and guests young and old. The custom steel bar surround, the forest-filled windows and pendant lighting create a chic saloon setting.

Natalie’s warm and fearless design choices give the home a full-throated personality, while still maintaining the sleek and refined finishes of a mountain-modern home.

The great room’s hot-rolled steel fireplace houses stacked firewood, expertly blending texture and warmth with modern ornamental steel. Cowhide rugs cover the white oak floor, where thresholds are composed of flush steel plates, with a beautiful David Ward light fixture illuminating it all. In the winter-white-themed daughter’s room, plush sheepskin chairs, an ornamental crystal chandelier and photos of a white horse trotting through snow give the entire room an ethereal, fairytale feel. An orange Bertazzoni range punctuates the kitchen with a playful pop of color. 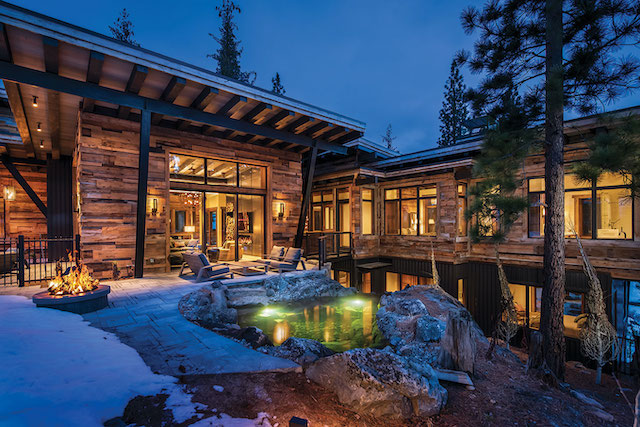 An outdoor patio wraps around to a spa built into the existing boulders; built by Heslin Construction and Streamscapes, the water feature cascades from the spa like a natural stream that can be viewed from the master bedroom window

These unique combinations mirror the exterior, where the vertical, board-formed concrete garage is topped with a living roof planted with sedium and grasses.

“We have a recessed reveal in this vertical application of the board form,” says Dennis Zirbel of the garage’s design.

Alongside the garage, he made the limited driveway space do double duty as a patio. Code required enough room for a fire truck to be able to turn around in the driveway, so Zirbel designed the driveway to seamlessly blend into the outdoor patio, which wraps around to the spa built into the natural rock formations. The natural spa spills over into a cascade that is viewed from the master bedroom window. Working with natural boulders, the spa and waterfall was an intense task that Matt Heslin Construction partnered with local water feature specialist Streamscapes to craft.

“We basically used massive existing boulders in that area, where we were tasked with making a hot tub that looks like it flows into a stream. That in and of itself was challenging, to say the least,” says Heslin. “You can draw that up on a plan, but until you start digging in and around those boulders, you never know what you are going to get.” 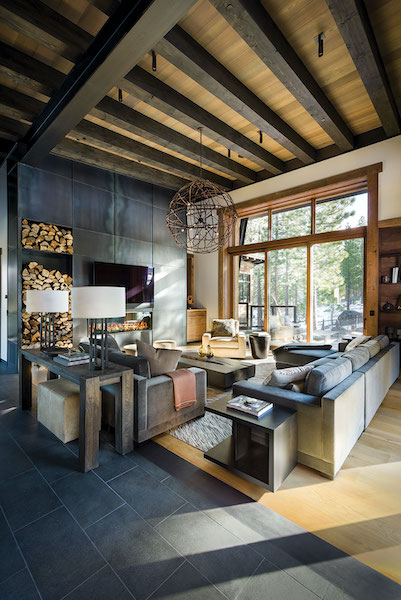 The natural rock, the jigsaw puzzle exterior, and the rustic and refined interior finishes represent the personality of the home. But the steel—both the bones of the cantilevers and the ornamental applications in the interior fashioned by Reno’s R.I.V.E.T.E.D.—is the unifying, but not overpowering, material throughout the Wawona Cabin.

On that foundation of steel, the structure came together into a home that, perhaps most importantly, feels effortless to move through.

“The house flows really well,” says Dennis Zirbel. “Even when it was being framed the owners were overjoyed with how well it flows. The key was putting the spaces where the spaces want to be, because that is what the homesite is giving you.”

The Zirbels’ creativity, channeled through a unique site, pushed the Wawona Cabin to incorporate a wide range of ideas and Alps chalet inspirations into a home that feels perfectly in place standing proudly over a landscape of sugar pine-speckled forest, overlooking sweeping views that focus on Northstar’s Lookout Mountain.

It was that property—rocky and sloping and spectacular—that shaped the Wawona Cabin’s final form.

“If we didn’t have those constraints, we would have had a different design,” says Natalie Zirbel. “It led us to this unique style of architecture because we had to go there.”