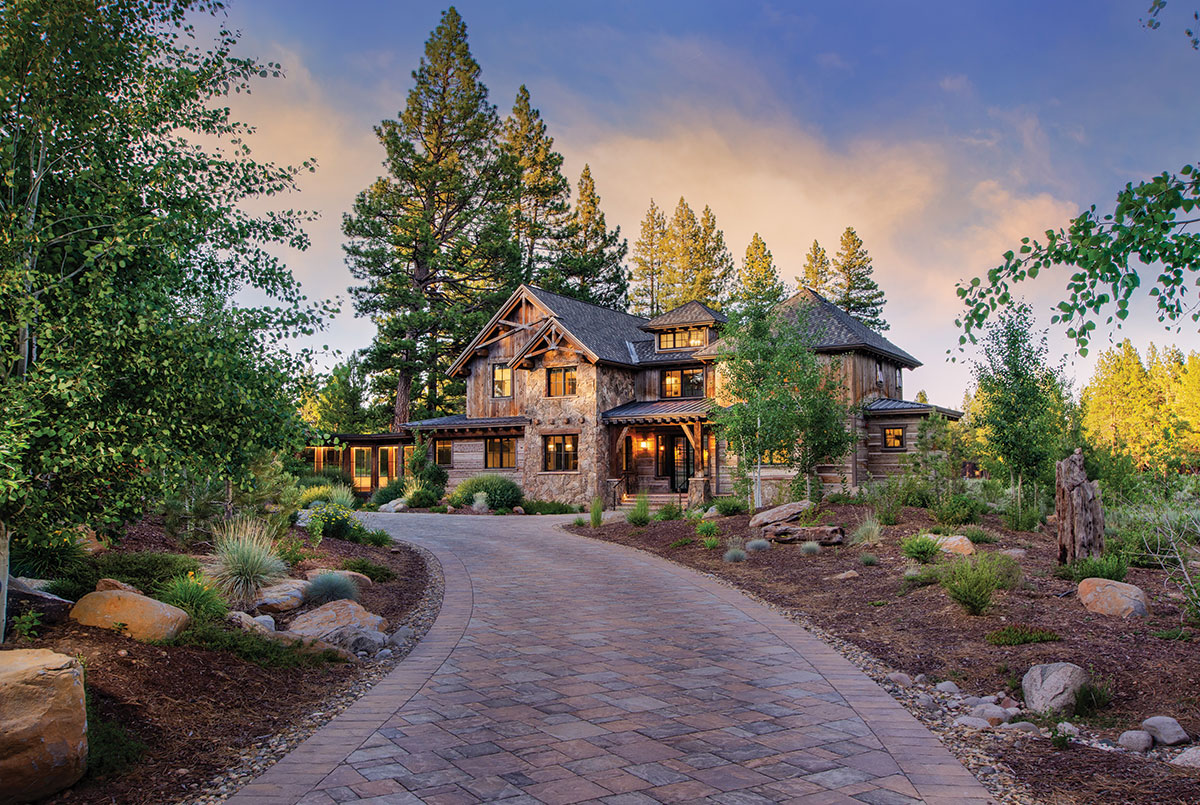 The home’s exterior design was influenced by the classic log cabin, with chinked log siding and hand-harvested basalt moss rock from Montana 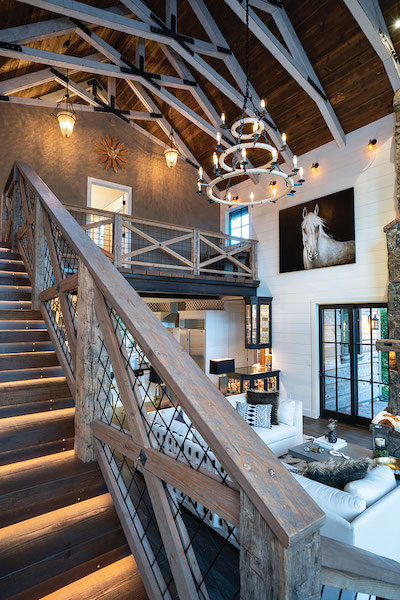 Brian Rickauer, principal of Structerra, Inc., and wife Cattarina brought together a wide range of cultural styles to create the home of their dreams in Truckee’s Old Greenwood community. In the great room, the design showcases structural timber trusses reminiscent of European chateaus

When Brian Rickauer and wife Cattarina set out to build a residence for themselves in Truckee’s Old Greenwood, there was no shortage of inspiration to draw upon. Brian, owner and principal of Truckee-based Structerra, Inc., has been building custom homes in the Tahoe region for 15 years and is an expert in the field.

“There wasn’t one inspiration; that’s what made this house so unique for us,” says Brian. “I’ve been building and designing since I was a kid, and it was everything I’ve accumulated in my mind through a whole lifetime and career in the building and design industry.”

The pair have very different backgrounds: Brain is originally from Colorado, and Cattarina from Brazil. Their objective was to bring together each of their unique lifetimes of ideas and experiences, merge those with a collection of reclaimed and salvaged materials, then manifest it all into one forever home.

The result is an inviting and eclectic home, undefinable in style, but which most closely resembles that of a mountain industrial farmhouse with a touch of modern flair.

An array of materials span the last century and range from the truly rustic to the very modern. The foyer features a reclaimed brick floor, salvaged from a 100-year-old teardown in San Francisco’s Chinatown. The historic brick is juxtaposed against a 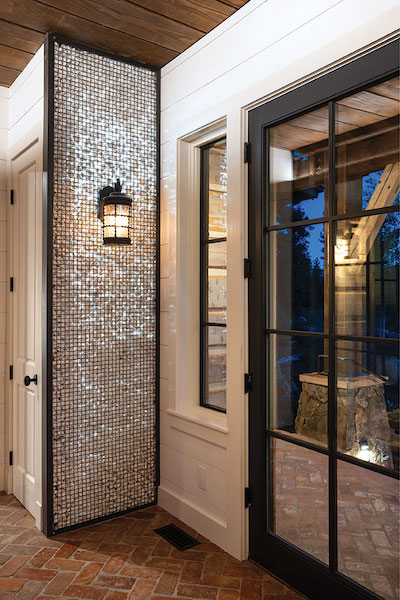 Brick salvaged from a 100-year-old building in San Francisco’s Chinatown was used for flooring inside the front door, which is flanked by two metal mesh towers filled with white quartz stones and backlit to give the effect of glowing snowballs

Some materials were leftover remnants from past Structerra projects, such as the reclaimed hand-hewn barn post that greets guests as they enter the great room. The rustic post still features its original mortise and tenon joinery and abuts a sleek steel beam supporting the gallery overhead, reiterating the theme of old meets new.

The soaring two-story great room draws the eye upward to the timber trusses supporting the roof. In designing the home, Brian wanted this timberwork to be fully exposed and authentically structural, evocative of the chateaus he’s visited on trips to Europe. He accomplished this with the use of structurally insulated panels, or SIPs, which allow the skeletal trusswork to be displayed as an architectural feature underneath the roof’s outer shell.

Other design elements intended to lend authenticity to the home are the selection of interior finishes. There is minimal drywall; wall coverings consist of moss-covered stone, white shiplap paneling, and even river clay. A selection of wallpaper adds warmth and textural interest, including burlap, which reminds Cattarina of the burlap bags commonly used to package coffee beans in her native Brazil. A black-and-white-patterned, encaustic-style tile in the guest bathroom is another traditional Brazilian element reflecting her heritage.

They found their opportunity to build a barn with the garage structure, which houses a guest room, a separate caretaker unit and three garage bays. It is modeled after a traditional monitor-style red barn and evokes the initial feelings of idyllic America that Cattarina experienced when first coming to the United States and driving through the countryside. 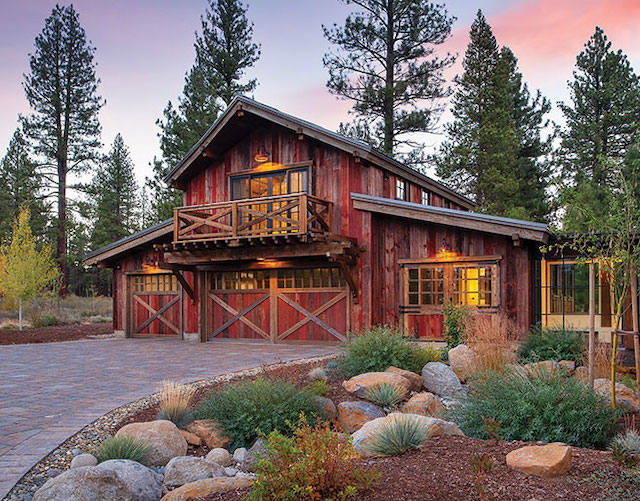 A traditional monitor-style red barn connects to the main home

The log cabin influence was expressed in the chinked log siding on the home’s exterior. It was inspired by the historic Watson Cabin in Tahoe City,

and also reflects Brian’s desire to incorporate elements from his experience building log homes in the mountains of Colorado.

The thoughtfully laid-out floor plan allows the home to live larger than it is. Some rooms play double duty as passthrough or multipurpose spaces, increasing the efficiency of the square footage. A corridor leading to the master suite doubles as a library and reading nook. The media room also functions as a guest room, making use of the cozy train-car-style bunks for additional sleeping space.

A glassed-in floating bridge connects the home to the barn/garage and also houses a thoughtfully organized built-in laundry wall. The connector bridge is one of the owners’ favorite places in the home. The expansive windows bring the outdoors in, giving the space a solarium-like feel and views of the landscaping. 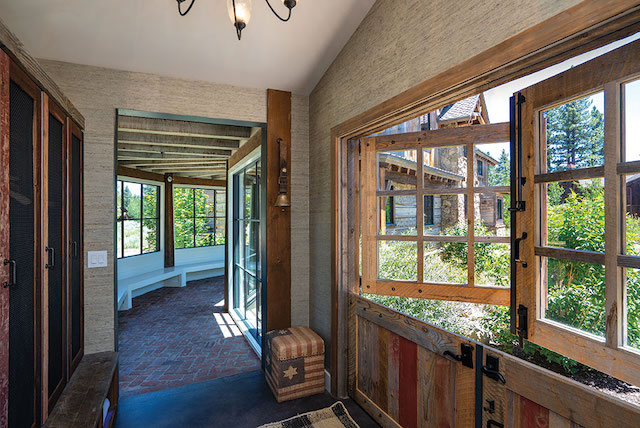 “During a snowstorm, the snow swirls above and below you, in front of and behind you, and it’s just so cool,” Brian says.

The home is situated in a quiet setting, near the back of Old Greenwood and at the end of a cul-de-sac. The pie-shaped lot opens away from the back of the home, offering tranquil views of the golf course pond and Carson Range beyond.

Brian designed the landscaping himself to maximize the already private site. Earthen mounds, sculpted to look like naturally undulating topography, and a thick grove of aspens screen the home from the street. The aspens, along with abundant plantings of columbine, soften the landscape and are an homage to Brian’s Colorado roots.

The couple collaborated as a team throughout the project, seamlessly blending their respective ideas together.

“The best thing about building this house was all of the decisions we had to make together were fluid,” says Cattarina. “It was easy, even though we come from such different backgrounds.” 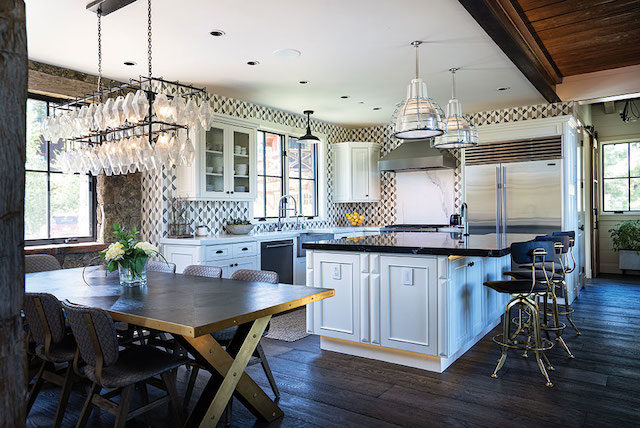 The kitchen pops with complementary light and dark tones, with Calacatta marble countertops contrasting with Nero Marquina black marble on the island, and a wall-wrap of custom-blend tile merging with a fully stoned wall at the dining area, where a polished brass-and-oak dining table from Zin Home sits under an Adeline antique iron chandelier

Brian agrees: “We brought it all together and we agreed on everything. There was nothing that was contested.”

During construction, Brian realized they were pouring so much of themselves into this project that it would be the only home they would build; it would become their forever home.

“I couldn’t stop myself,” he says, “We put so much of our heart and soul and energy into this house. This home was built with love, sweat, blood and tears. It’s made by us, it lives with us, and it will grow with us.”