in Looking Back | Mountain Home Awards 2021 | Written by Tim Hauserman

For the better part of the past century, Frog Lake sat in relative obscurity in the rugged high country near Truckee—a serene alpine oasis visited by few with the exception of the landowners and their close friends.

But in a region rich with history, from the Donner Party to the Transcontinental Railroad, this remote lake has a surprisingly colorful past of its own.

One tale from Frog Lake stands out in particular. Not because of its historical significance, but because of the peculiar—and potentially deadly—nature of the incident.

Details are thin and beg questions. But thanks to the descendants of Frog Lake’s former caretaker, paired with some old newspaper clippings, the events from that summer day live on.

It was August 1958 when Fred Cox, who was a friend of Frog Lake owner Lawrence Smith, walked around the corner of the property’s stone cabin and saw a man with a shotgun trained on Smith and his caretaker, Walter Taylor.

“He told me to line up with them, ‘I may as well kill you too,’” Cox later told the San Francisco Chronicle. “When you are looking down the barrel of a 12-gauge shotgun, you don’t argue. I got in line.” 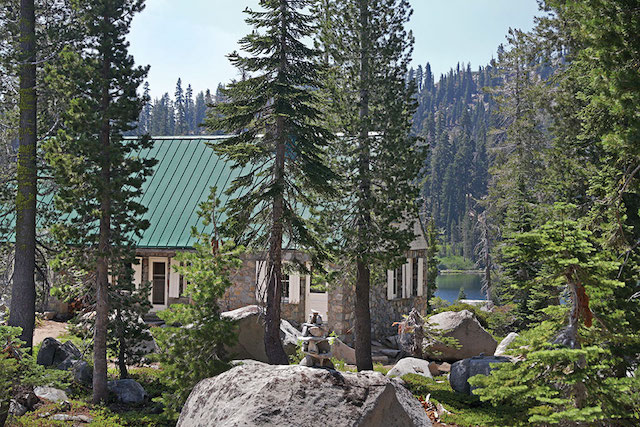 Gill, who had been drinking, according to reports, ordered the three men into the back of his pickup truck, then fired a shot at their feet “because [they] were not moving fast enough.” He proceeded to take the captives on a wild ride down the steep, winding road to the Euer Ranch more than 3 miles away.

“He stopped at the gate of the Euer Ranch and gave me the key and told me to get out and unlock it,” Cox told the newspaper. “The key wouldn’t work and I told him so. He said, ‘It had better work or I’m going to blow your brains out.’ But it didn’t work!”

Amid the tense situation, Euer arrived on the scene and spoke to Smith as Gill looked on, saying nothing while standing with the shotgun cradled in his arms. Smith told the reporter, “I said to Euer, ‘We’d like a ride back up the hill,’ and he said, ‘No, you better walk.’ So we started walking and we didn’t look back.”

Meanwhile, Smith’s wife back at Frog Lake had contacted the Nevada County Sheriff. According to the Chronicle’s account, Gill disappeared into the forest as law enforcement officers moved in, only to turn himself in following “an intensive Nevada County manhunt.” He was charged with assault with a deadly weapon and held on $10,000 bond.

While no harm was done in the end, the incident was documented in three separate articles in the Chronicle, which sensationalized the coverage with a headline that read, “Two SF men periled in the Sierra.”

The sheriff deputized caretaker Taylor as a result, telling him that since he lived in the middle of nowhere, he should take care of any future incidents himself.

“After that, grandpa put his badge on before his hat each morning,” says Steve Harrison, Taylor’s grandson. “He would go downtown to the Pastime in Truckee wearing his badge and pistol in a holster.”

For Harrison, the kidnapping story is part of family lore, passed down from his grandfather and the Smiths. He learned as a child that the altercation stemmed from a minor property dispute, as the Smiths had been driving on a portion of the Euers’ land to avoid a flooded section of road to Frog Lake. Despite the ill-thought-out actions of Euer’s son-in-law, the two families developed a cordial relationship, along with the Taylors.

A Failed Plan for Frog Legs

Seeking to forever preserve the land they owned for more than 80 years, the Smith family sold their Frog Lake property to the Truckee Donner Land Trust in June 2020. 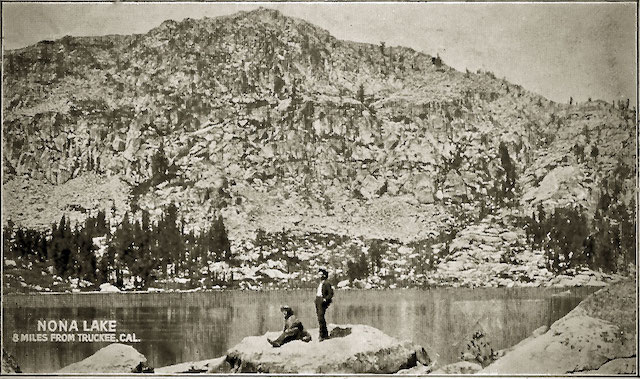 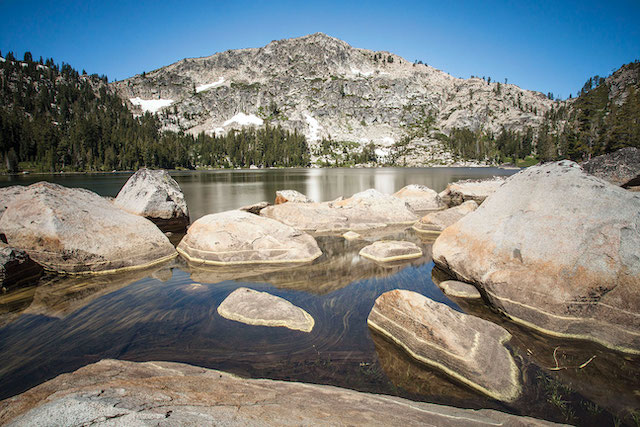 Around that time, a land trust board member discovered a postcard from 1906. It features a black-and-white image of two men standing on a rock on the shoreline of a pristine backcountry lake, its clear waters reflecting a towering granite cliff above. Text in the lower-left corner reads, “Nona Lake, 8 miles from Truckee, Cal.”

Yet, a quick photo comparison between Nona Lake in 1906 and Frog Lake in 2021 reveals an indisputable truth: They are one and the same.

As it turns out, Truckee patriarch Charles McGlashan christened the lake “Nona” for his wife Leonara, who went by Nona. The lake was then owned by the Southern Pacific Railroad as part of the “Sierra Checkerboard,” a gift by President Abraham Lincoln that allotted every other square mile in the area to the company to get the Transcontinental Railroad built.

According to McGlashan’s granddaughter, also named Nona, her grandfather had interesting plans for the lake.

“In recent years frog legs had been in demand at gourmet restaurants in San Francisco,” she wrote in a book about McGlashan called Give Me a Mountain Meadow. “Virginia City and Truckee residents too would pay good prices for such delicacies. It occurred to him that production of frog legs might be profitable if frogs could survive the sub-zero winters.”

McGlashan acquired two-dozen French frogs from San Francisco and hired a man to carry them by horseback up the treacherous route to Nona Lake, at 7,600 feet in elevation.

The frogs did not survive the first winter.

Contrary to the direction this story seemingly leads, the Smith family bought the land from the railroad in the 1930s and named the lake after a frog-shaped boulder.

For Mary Harrison Govan, Steve Harrison’s younger sister, the kidnapping story is one of countless family tales from Frog Lake, where she and her five siblings spent a good portion of their childhood summers with their grandparents.

She describes the Smith family, including Lawrence Smith and his three brothers, as always friendly and hospitable, as they welcomed the entire family of their caretaker for extended stays. 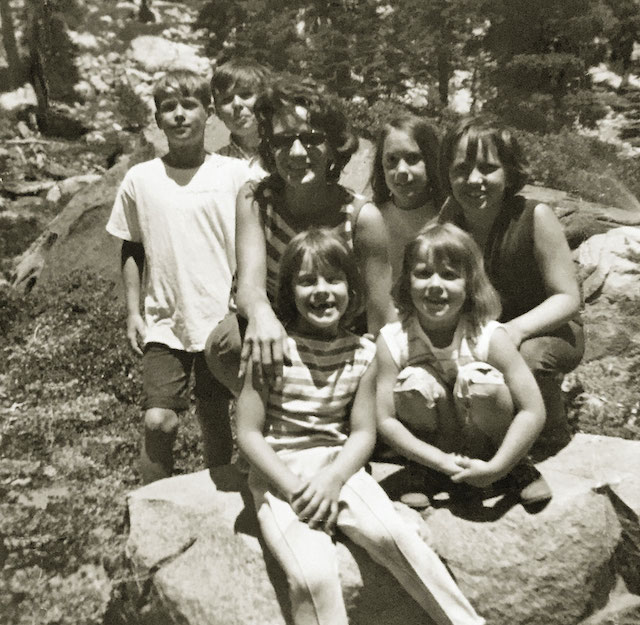 The Harrison kids, pictured with their mother at Frog Lake, benefitted from being the grandchildren of the private property’s former caretaker, Walter Taylor, courtesy photo

“I started going there the year I was born,” says Govan. “We hiked and fished and would go out on the little boat to catch a half-dozen brown trout for dinner. I’d always fight with my younger sister for who got the fishing pole.”

While the San Francisco Chronicle articles in 1958 portrayed the “Smith Ranch” as a palatial place of luxury, in reality it was a rugged existence. There was a simple stone house that still stands, as well as several cabins that were so small that the Harrison kids would usually be sent outside to sleep.

“You are up there in the middle of the Sierra. There was no TV. We played board games and would be bored to death sometimes. But when I look back, it was such a lucky life,” says Govan, describing fun times rowing and sailing boats across the lake.

Harrison has equally compelling memories of his summers at Frog Lake. He remembers communication was only a once-a-week thing via walkie-talkie. And it was an 11-mile drive to downtown Truckee via a narrow dirt road that made for a long trip. Once the family got to the lake, they didn’t leave often.

Back then Frog Lake really felt like the middle of the wilderness, says Harrison: “One time my brother and I were building a rock fort near the water tanks when we heard a whistle. Grandpa waved at us to get down and fired a shot over our heads. We found out later they were trying to scare away a mountain lion that was behind us.” 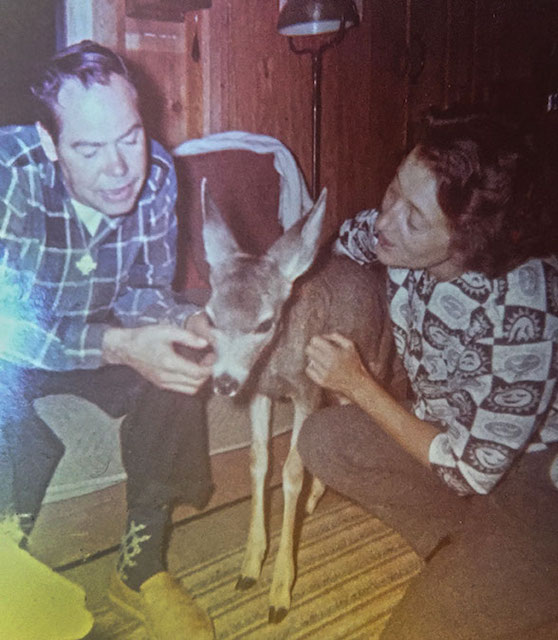 Former Frog Lake caretaker Walter Taylor cares for a deer fawn that showed up at the lake in 1966, courtesy photo

Wolverines and bears visited the property as well, and porcupines were a frequent nuisance. They would show up in the middle of the night and chew on anything left outside, which could be pretty unnerving to a young kid when it happened near his sleeping bag.

Harrison’s grandpa used to scare the kids with a true story—as far as they knew—of a couple who hiked into the lake. Taylor told the visitors that it was private land, but when they asked if they could just go for a quick swim, he agreed, so long as they checked in with him when they were done. When he hadn’t seen them for a few hours, he went to the lakeshore and found two piles of clothes, but no signs of the hikers. They never found out what happened to them.

Harrison says another highlight of their time at Frog Lake was when a deer fawn showed up alone in 1966.

“My grandparents took it in and fed it with a baby bottle and called it Charlie Brown. Then they got ahold of Mutual of Omaha’s Wild Kingdom, who put the deer on TV,” says Harrison.

All that time in the Sierra got into the Harrison family’s blood, and by the early 1970s they had moved first to Donner Lake and later to the West Shore of Lake Tahoe.

While summers at Frog Lake are now distant memories for the Harrison family, the lake and the stunning terrain surrounding it look the same today as 50 (or 100) years ago. And as the Truckee Donner Land Trust takes over ownership of the property, more people will be exposed to the magic of this secluded mountain lake—and all the stories both old and new that have materialized on its shores.

Tahoe City-based freelance writer Tim Hauserman has hiked to Frog Lake Cliffs on many occasions and peered down at the idyllic setting of the lake some 1,200 feet below. Several years ago, his North Tahoe High School classmate, Mary Harrison Govan, contacted him to suggest writing about a bizarre kidnapping at her childhood summer haunt. 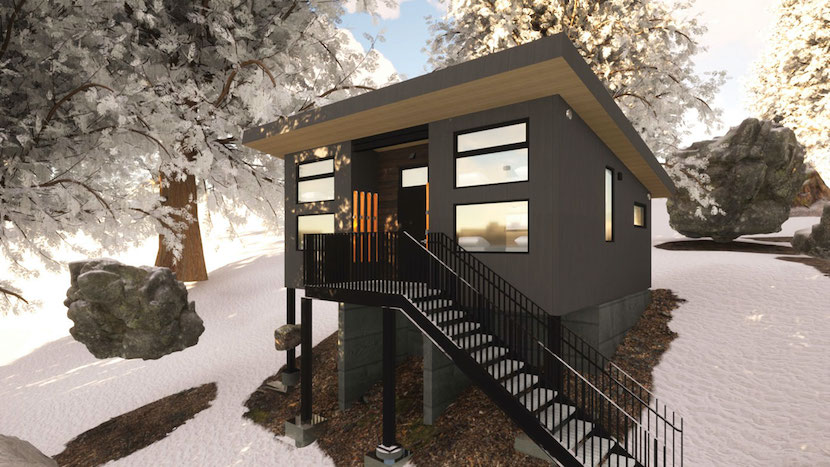 The Truckee Donner Land Trust will play a vital role in Frog Lake’s story moving forward. The conservation group and its partners purchased the lake and surrounding land this past summer, ensuring that it will be protected for the foreseeable future.

But that’s not all. The Truckee Donner Land Trust is renovating the property’s existing stone hut that dates back to the 1930s, calling it the Eschenbach Stone House. The historic structure will serve as the communal area for cooking, eating and hanging out and will be joined by two sleek new modular sleeping huts—the Ted R. Hut and the Albert M Rockwood Bunkhouse, which will be available to rent when completed later this year. The huts, designed by SageModern, are a big step up from your basic wilderness hut, with running water and heat.

Thanks to the Truckee Donner Land Trust, backcountry skiers and hikers can now experience the true wilderness feel of this remote Alpine lake, but in newfound style and comfort.