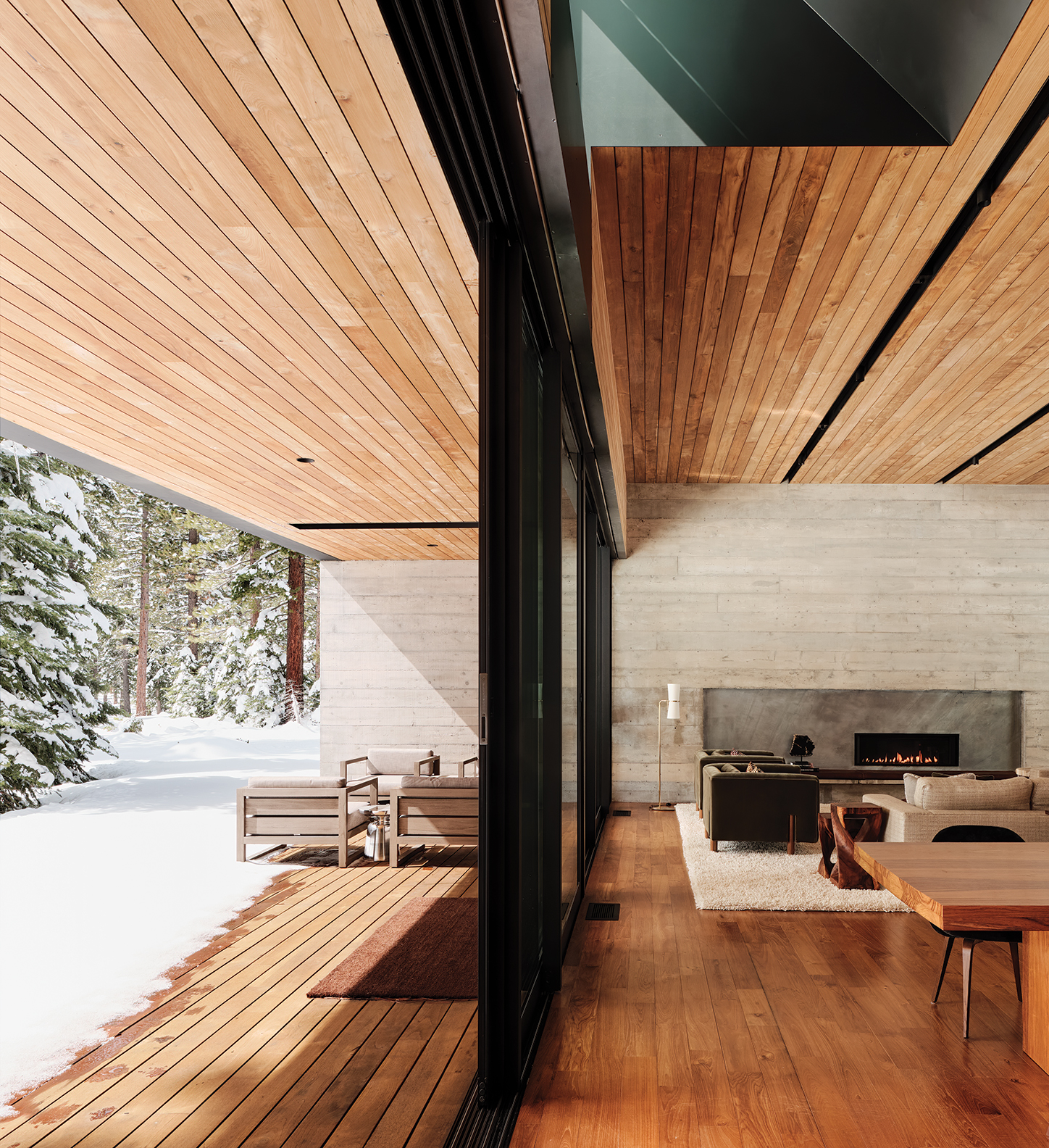 A wall of board-formed concrete continues from the living room out to a covered floating deck, providing a seamless transition from the home’s interior to the forest 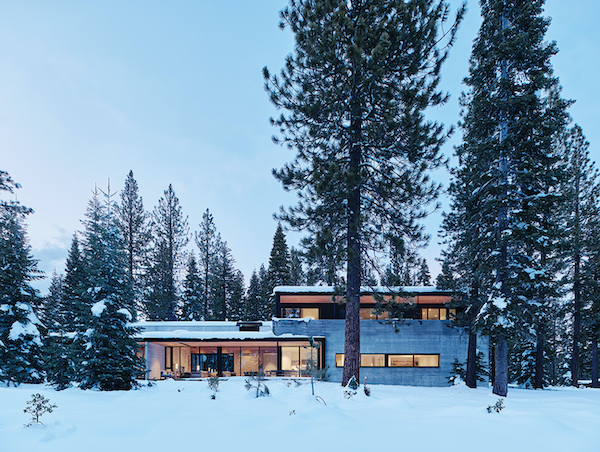 The home keeps a low profile to allow focus on the surrounding firs and pines, which architect Greg Faulkner took great care to preserve

Wes Nichols was not in the market for a mountain home. And he was certainly not looking for a place some 500 miles away from his primary residence in Los Angeles’ Pacific Palisades neighborhood. But all that changed when he came to the Lake Tahoe area on a retreat and saw a friend’s Martis Camp home.

“It took about one visit for me to go, ‘This is amazing,’” Nichols says.

Impressed by the surroundings and Martis Camp’s amenities, Nichols and his wife Julie spent several weekends in 2016 returning to the community, checking out both existing houses for sale as well as vacant lots, but with no luck.

“We were about to head back to the airport, frustrated that we couldn’t find anything, when we happened to look on Zillow and saw this lot was available,” Nichols says. The almost 2.5-acre property was everything the couple wanted: no nearby houses, plenty of fragrant, towering pines, and located in a far corner of Martis Camp that backed up to forest lands and offered mountain views.

Once sold, the Nichols’ choice of architect was easy. The couple had two friends whose houses they considered as “models of excellence,” Nichols says, both designed by Greg Faulkner of Truckee’s Faulkner Architects. 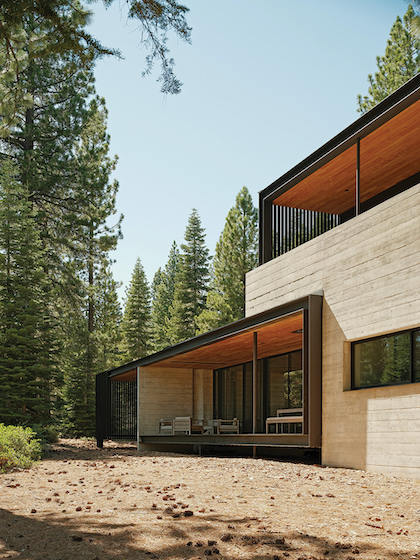 The design employs strong geometric forms, while concrete, glass, wood and steel combine on the exterior to create a modern aesthetic

“We’re not the traditional log cabin types,” Nichols says. “But we also didn’t want to be the city slicker jackass that built something out of context.”

The couple wanted a home that could adapt to climate change dynamics—that could survive increased snow loads and threats of forest fire. Another important consideration was the site itself.

“The texture of the landscape is imprinted on the architecture,” Faulkner says. “Our clients asked for a modestly sized and priced house that reflected today’s energy in material and detail.”

In this densely forested area of pines and firs, the house was situated to avoid cutting as many trees as possible; Faulkner estimates they preserved about 115 trees, most between 60 and 90 feet tall.

The Nichols began the design process by finding ideas online. One such inspiration was Norway’s Juvet Landscape Hotel. “It captures the beauty of its environment in a very cool, contemporary way,” Nichols says.

That became a guiding theme, and Faulkner was given the lofty goal of creating a home capable of subtly capturing the beauty and essence of the Tahoe forest. The architect responded with a modern, geometric, 4,500-square-foot, four-bedroom home. “When Greg presented the initial design, we didn’t have many changes; it was that good,” Nichols says. “He nailed it.”

The Nichols had also chosen Glennwood Mountain Homes for construction and Natalie Zirbel for interior design. “The quality of the work was very high,” Nichols says of his Truckee-based team.

A mix of concrete, glass, wood and steel, the home fits perfectly in its forested landscape by utilizing its modern materials in a natural way. On the exterior, board-formed concrete allows the impression of wood grain, while adding a level of fire resistance. An ebonized steel rainscreen, made of 3-inch-by-3-inch steel angles, or “fins,” spaced an inch apart, is meant to mimic the bark of the surrounding trees. 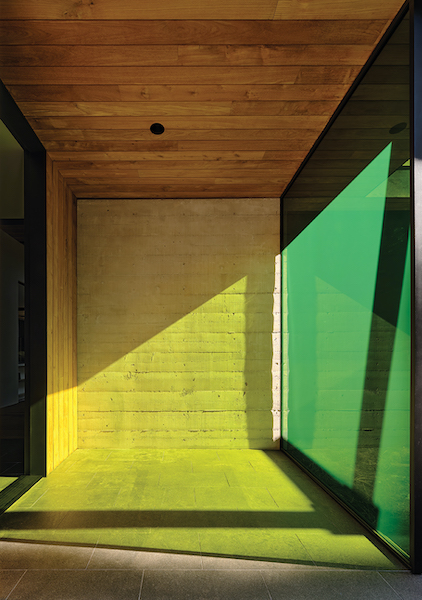 A large green glass panel at the entrance—‘essentially a piece of art,’ says homeowner Wes Nichols—was intended to match the hue of the sun-splashed pine needles outside and is complemented by another green panel on the interior

Chris Abel, president of Glennwood Mountain Homes, estimates there are close to a thousand of these fins covering more than a third of the home’s exterior. Each steel fin was individually cut, powder coated and fastened. “It’s a very cool look,” he says.

The home keeps a low profile, allowing focus on the surrounding landscape. Even the front door is nonobtrusive, revealing itself only as one walks along the sidewalk. Set at the entrance is a giant piece of green glass that matches the hue of sun on the pine needles of nearby trees and is complemented by a matching green panel on the interior. “It’s essentially a piece of art,” Nichols says of the glass.

“Color excites the mind,” Faulkner adds. “If inspired by the existing context, it is a powerful connector. Here, translucent glass was used to create a green light that repeats the behavior of the sun on the pines.”

Each glass panel stands 10 feet tall, 5.5 feet wide and an inch thick. Abel says that the panels weigh approximately 720 pounds each. “The installation was a little nerve-racking,” he says.

The second green glass panel greets visitors in the understated entryway, which opens into the living and dining area. The exterior materials carry indoors, providing a seamless transition between the home and forest. In the living room, a wall of board-formed concrete continues past the living room and out to the covered floating deck. Two three-dimensional skylights, one in the living room, one in the master bedroom, wrap from the ceiling down the wall, allowing light in during the day and a view to the stars at night. Reclaimed teak is used on the floor as well as on the ceilings—inside and out—while a full wall of sliding glass panels further blurs the lines between outdoor and in.

“It was a privilege to be a part of such an iconic mountain home with an amazing team and owners,” Zirbel says. “The forest setting holds a beautiful balance of strength and serenity, and these qualities pervade the architecture and interiors.”

Because of the architecture’s strong geometric forms, Zirbel says she chose a more organic style for the living room’s design elements, like the furnishings and lighting, to provide a contrast. 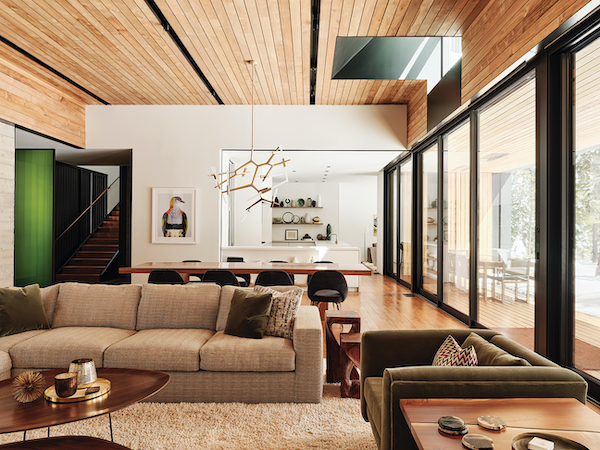 The living room includes a three-dimensional skylight that wraps from the reclaimed teak ceiling down the wall, which opens to the exterior through sliding glass panels

“The panoramic wall of glass visually captured nature’s designs, but through certain pieces, like stone-shaped tiered coffee tables, dried branches and live-edge side tables, we gave organic design a presence within the space,” she says.

The kitchen is just off the living/dining room. Flooring here is imported flamed black granite—also used in the mudroom and bathrooms—while the custom cabinetry is white with push latches, adding to the streamlined feel, and topped by white Caesarstone countertops. The white-on-white theme allows the kitchen to disappear into the backdrop of daily life, while the visually noisy appliances are concealed in the pantry behind a hidden door to buffer equipment sound.

Beyond the kitchen is a family room, and off this space is a study, though it’s not immediately obvious.

“Since this is our second home, I wanted to have an office that I could also forget about,” Nichols says. This was accomplished by disguising the office door as a panel that blends into the wall. “It’s a way to separate work life from mountain life; I want to be here and enjoy the moment.”

On the other end of the house is the master suite. It shares the board-formed concrete massing of the living room, and, like in the living room, also contains a rectilinear fireplace set into the wall and framed in polished galvanized steel. The teak ceilings here wrap down the walls, providing a richness that complements the more industrial feel of the concrete. Fuzzy blankets and a plush rug, set beside the warmth of the fireplace, add another layer of comfort and texture. 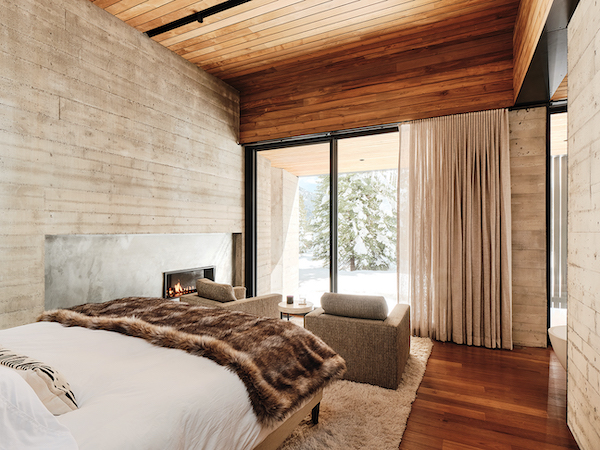 The master bedroom, like the living room, features a rectilinear fireplace set into the wall and framed in polished galvanized steel

“In the master bedroom, we created custom wood wall hangings that simulate the changing geometric shadows cast by the skylight,” Zirbel says of the artwork over the bed. “Rather than introducing a new element of design here, mirroring the architecture proved to be a serene and calming solution that enhanced the sanctuary-like vibe of the space.”

Throughout the home, trim is eschewed for an all-drywall return to the doors, flooring and windows. “It’s a very contemporary look,” Abel says.

Three upstairs suites share a covered deck, another fabulous place to sit and contemplate the surrounding forest. Indoors, thoughtfully chosen pieces throughout the home nod to the Nichols’ travels to Africa. “We supported global artisans by selecting custom handmade pieces from around the world,”
Zirbel says.

From initial planning to completed construction, the home took about two and a half years, allowing the couple to spend Christmas 2019 in the Sierra. Since then, Nichols estimates that he, his wife and their two golden retrievers spend about a third of their time in the mountains. And though the home is modest by Martis Camp standards—where square footage can reach the quintuple digits—Faulkner created the house so it could easily expand with another wing in the future, if desired.

While the home was built to enjoy the privacy of the woods, the Nichols are big fans of their new neighborhood. “Martis Camp is such an amazing place,” Nichols says. “And we love the Truckee community, the people we’ve met and the proximity to Reno. It’s got a small-town feel; it’s the antithesis of L.A. in many ways.”