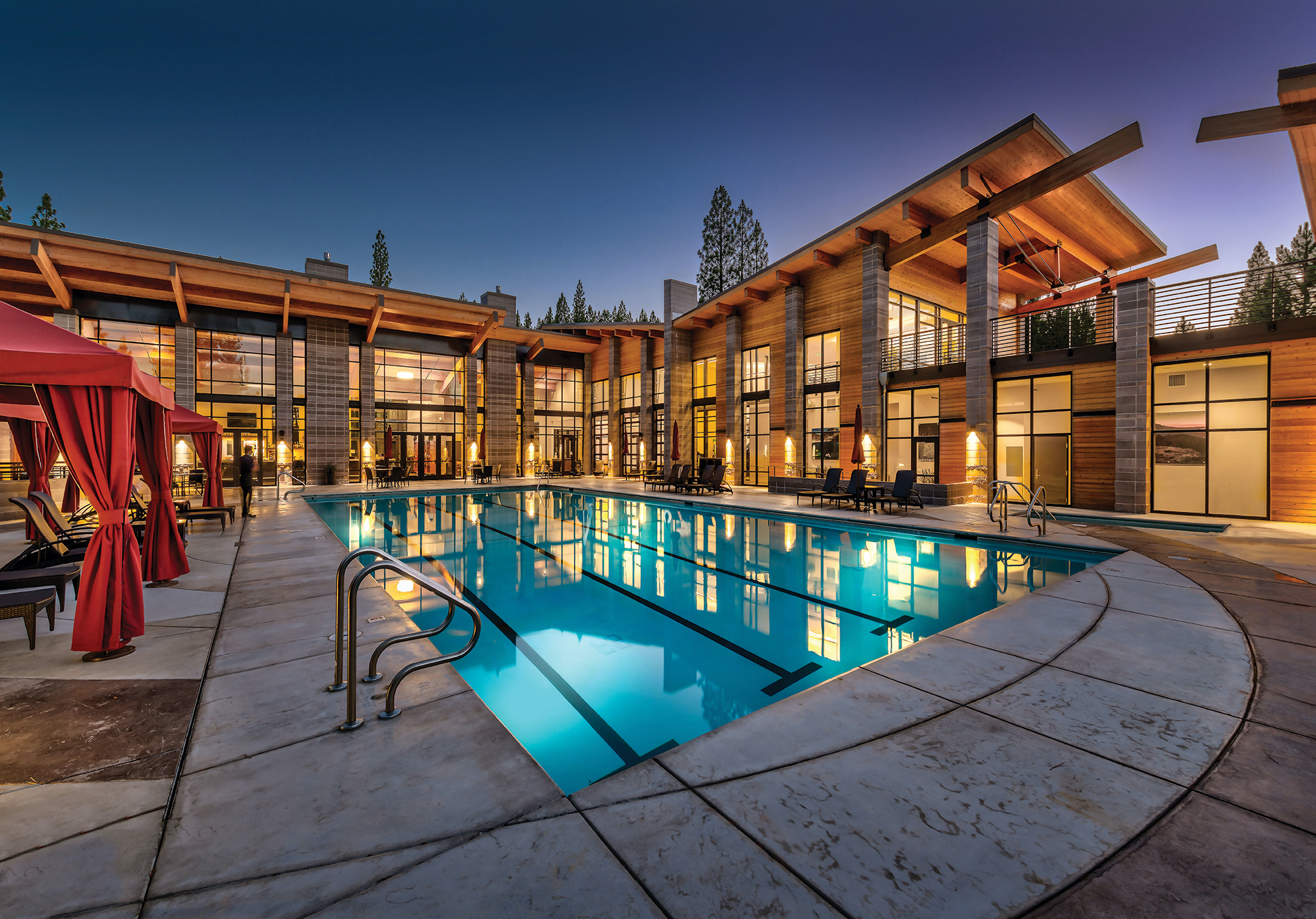 Altitude at Nakoma draws on the cultural, economic and natural history of Plumas County to create a modern recreation space with an eye on the future 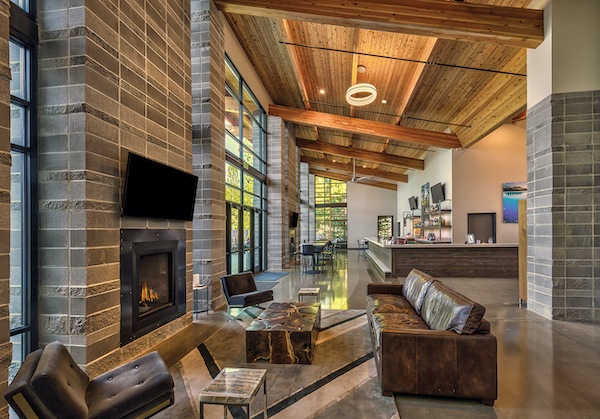 Conceiving a building to sit in the metaphoric—and practically literal—shadow of a Frank Lloyd Wright–designed structure may seem like an intimidating task, but when Cathexes Principal Jeremy Packer was tapped to do just that in 2014, he didn’t feel nervous at the prospect of rubbing foundations with “the big guy in the room.”

Packer’s project was Altitude at Nakoma, a recreation facility intended to complement the then-forthcoming resort’s boutique inn. Opting for inspiration over mimicry, Packer and the Cathexes team used the nearby Dragon golf course clubhouse, bar and restaurant designed by America’s most famous architect as a launchpad.

Packer explains that Wright’s design—with its hearth-centric heart, rhythmic marriage of stone and glass, and roofline evoking the pitch of tepees on the Great Plains—is “amazing and beautiful, certainly,” but it sprang from a different place in a different era. Specifically, Wright developed the plan for the lodge in Wisconsin in the 1920s, so Cathexes drew from the most successful elements of Wright’s designs to create a structure more suited for the Lost Sierra of today.

To do this, they kept the conceptual core of the lodge by paying respect to the first people who called the region home—the Maidu. Packer found architectural inspiration for Altitude in their shelters that opened to and were warmed by the rising sun, a strategy employed in the north-south breezeway glazed to allow light and heat to penetrate deep into the space to chase away the morning dark and chill for early-rising fitness enthusiasts. 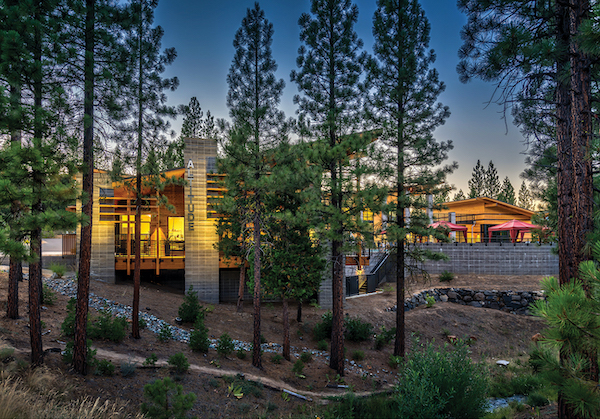 Packer also drew from the tone, intricacy and design of the Maidu’s watertight basketry he found “too perfect to ignore” as he designed the pool deck to feature concentric rings that spread like ripples or woven layers into the rest of the structure.

Walking the concept back even further, Cathexes took in the area’s true first inhabitants—the trees and mountains—and inverted the roofline to accommodate them. Instead of low-hanging, broad, cantilevered roofs suited for the unending flat-line expanse of the prairies, they “flipped” the design to create flying-V shapes that draw the eyes upward toward the tops of the surrounding natural features and ultimately the sky.

In fact, siting the structure to sit on a decent slope, maximize views and preserve as much of the existing alpine beauty as possible was the first step in bringing Altitude to life. Packer and Cathexes partner Don Clark initially walked the area with the Nakoma owners to find the perfect location, then began imagining scenes they called vignettes to envision the stories that would play out at the facility: families gathering before heading out for a hike, golfers trekking from the course for a drink, children jumping into the pool.

They knew they wanted the building to face north because of the valley vistas. From there, the process became an exercise in conjuring a visit to Altitude. Packer saw a grand lobby and atrium with everything opening to the primary focal element of the pool deck and then the scenic views beyond that. 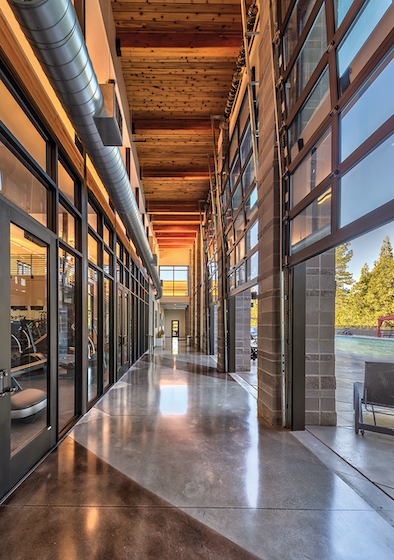 “No matter where you’re at and starting from, you always have this reminder of the beauty and nature around you,” he says.

From there, the rhythm and form of Altitude took shape, as did the choice of building materials, which Packer describes as “very simple and honest.” Glass, cedar and concrete-block pilasters interplay with the topography, while Douglas fir rafters (“we exposed as much wood as we could,” Packer says) and glulam beams suggest a connection to the area’s historic lumber resources. Similarly, a large wood-and-steel truss visible on the upper roof deck between the teen and fitness centers, as well as hot-rolled steel cladding on the building, hint at a turn toward Plumas County industry and rail travel without abandoning nature.

“Cedar and stone next to hot-rolled steel? They work symbiotically and beautifully,” says Packer, whose team worked with McCuen Construction on the build. “It’s really a nice match.”

Designing in alpine environments today requires not just a knowledge of the past, but also a commitment to thinking of the future. In addition to the tactile and visual character provided by the wood and masonry, the cedar is a renewable resource and the exposed stone and steel did away with the need for significant amounts of stucco, drywall, paint and other finish products.

Unfortunately, looking ahead also means seeing the reality of increasing wildfire danger that informs any new Lost Sierra build—and Altitude was no exception. Packer explains that Cathexes is always concerned about safety of residents and guests, as well as the longevity of structures when designing buildings around trees.

To that end, they discovered that the community services district didn’t have the water capacity to fight a fire at a facility of Altitude’s size should a blaze threaten the area. Cathexes worked with the district and several engineers to develop the pool as more than just a recreational amenity. In addition to serving as a draw for families and visual hub for social gatherings, the water can also be drawn via special connections to be used for fire suppression as needed.

Packer is particularly proud of this semi-secret firefighter element, though he says it’s “not necessarily a sexy architectural aspect, but part of reality.” As for actually sexy elements of the design, his favorite spot at Altitude may be what he calls the veranda: a space on the far east side, a bit removed from the hustle and bustle and splashing of the pool deck proper. 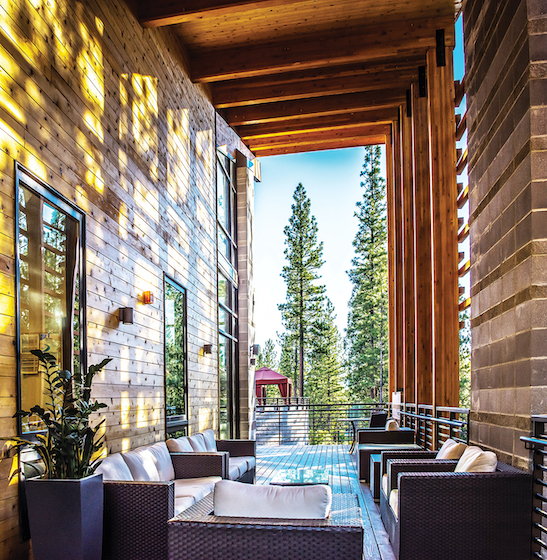 A covered outdoor gathering area at Altitude at Nakoma

The wood lattice and trellises create a vertical line that invites guests to take in the trees that are right in front of them. Not overly large, the dimensions of the space are ideal for “a couple groups of people to hang out and have drinks,” Packer says. “It feels like you’re not necessarily in the party. You’re next to the party.”

In other words, it’s where the cool kids in the know hang out—and where Frank Lloyd Wright would surely raise his cocktail glass in salute to his architectural neighbor.