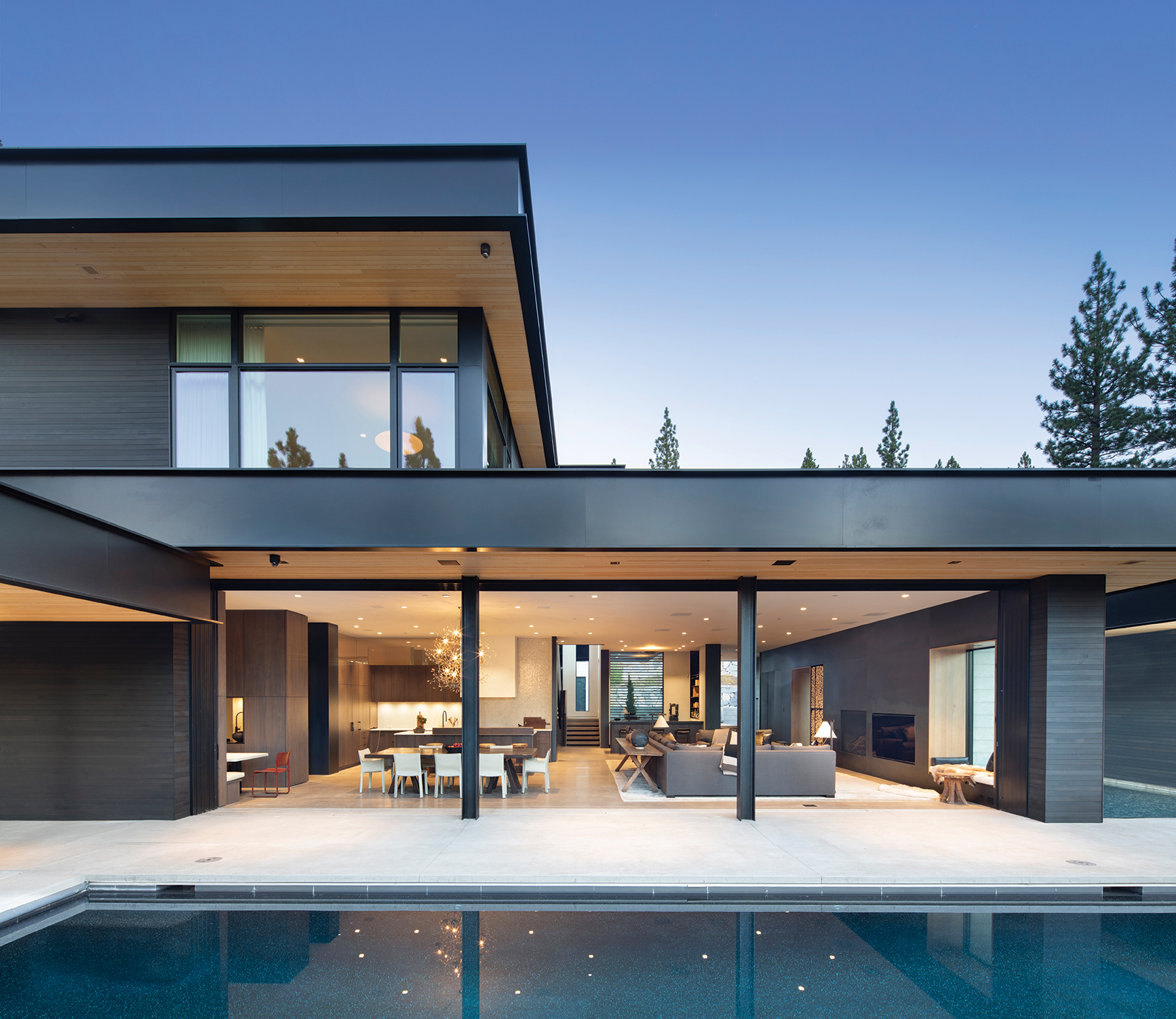 This year’s Outstanding Home is an extravagant, 6,822-square-foot masterpiece in Martis Camp 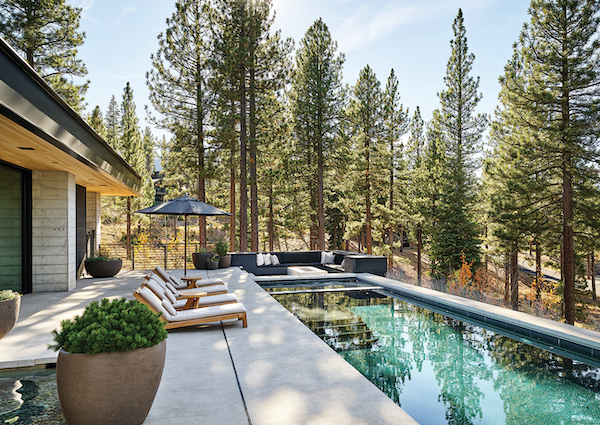 Good things come to those who wait.

At least, that’s one theory behind this year’s Outstanding Home.

Sleek, stunning and set in the exclusive Martis Camp development, the house was many years in the works.

“They had a long history of visiting this area and they’d put together a very heartfelt book about the house they wanted,” Walton says. “It was inspiring to see how much time and thought they had spent dreaming about the home they wanted to create for their family at this site.”

The book included their design ideas, information about themselves and elements they wanted, to include a swimming pool. “Swimming is a big part of their lives, and the family uses the pool for general connectedness. That was a significant part of the spirit of the home,” Walton says.

Not long after Walton began working on the project, the family decided to pause for several years. 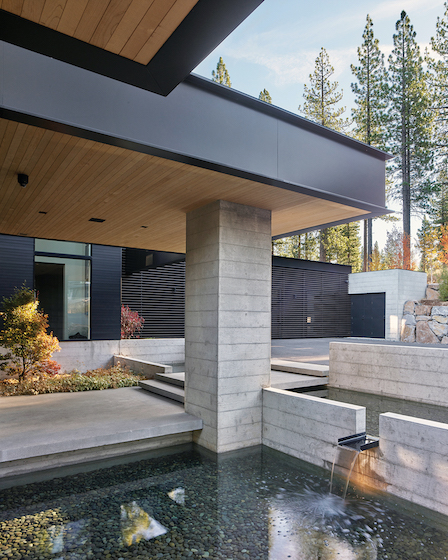 Water stands out as a major theme, running from the front entry through to the rear of the home, where a large swimming pool and built-in spa are located

In 2016, the homeowners were ready and the architectural design process began again. Working with strong geometric forms and modern materials, Walton created a masterpiece in the mountains that fully embraced the owners’ love of water and swimming.

“The pool as an essential organizing feature was a prime concept from the beginning and informed the overall layout,” Walton says. “We expanded on the pool as a concept and used water throughout the project.”

The build team included Jim Morrison Construction, led by Eben Schreiber as project manager, and Los Angeles-based interior designer Alexandra Loew, who had collaborated with the owners on a previous home.

Construction began in September 2016. Schreiber says they finished pouring concrete in the days before Christmas. “And then it started to snow and it didn’t stop until spring,” he says. The team twice tried to dig out the project, but ultimately made the decision to shut down until April due to weather conditions.

Those interim months, however, allowed both the team and the owners to assess and evaluate every inch of the project, ultimately making the home stronger. “Putting the project on hold allowed us to fine-tune everything,” Schreiber says. Many of the changes were at the owner’s request, as the additional time allowed him to go over everything from the finishes to the can lights to the sinks. “The owner was very involved, very knowledgeable, and he really dove deep into quite a few things,” Schreiber says.

Due to the multi-year pre-construction process, and the second four-month delay caused by snow, the home is arguably more polished, streamlined and nuanced.

The 6,822-square-foot house is recessed into a hillside. An acid-etched concrete entry walkway leading to the steel front door is flanked by shallow reflecting water. 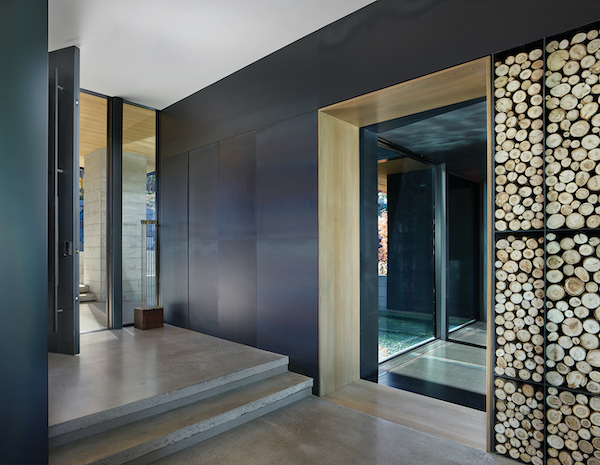 “As you approach the home, you experience water as a grounding concept,” Walton says. “You initially experience it at the entry, and it carries through to the rear of the home.”

The home opens into a great room that includes the living area, bar, kitchen, dining room and breakfast nook. Panels of hot-rolled steel comprise the living area’s wall and house both the fireplace and a cozy window seat. Flooring here is a polished concrete with exposed aggregate. “It’s a very modern form that has a San Francisco–loft sort of theme,” Schreiber says.

Loew says the color palette came from the owners, who love the look of hot-rolled steel. “Black was a driving force,” she says. “But we sprinkled in the colors from every season from the ever-changing scenery outside, from the white of the snow to the umbers of the pine needles.” And some colors, like those of nature, are subtle and enigmatic. For example, Loew says that some of the living room’s embossed leather pillows look black but are actually a lagoon blue.

In the kitchen, cabinetry is a stained walnut chosen to echo the forest outdoors. Designed by Henrybuilt, a modular company out of New York, the cube-like forms of the cabinetry hide appliances like the refrigerator and are used in the nearby coffee bar as well as the gourmet pantry. 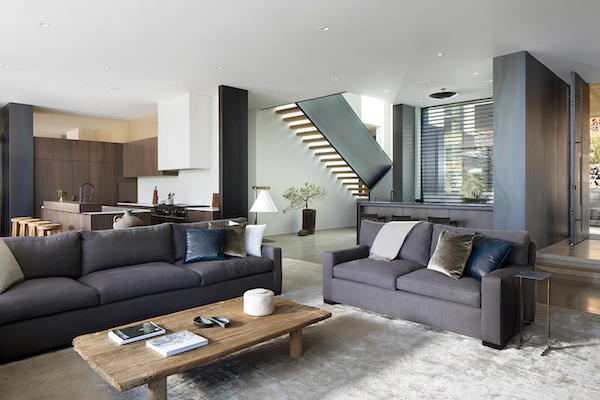 Custom features and furnishings abound in the spacious great room, where vintage and modern pieces by interior designer Alexandra Loew coexist in harmony

A plaster hood above the stovetop contributes to a sleek, minimal feel, while a white zellige tile backsplash adds a subtle richness. The island is a manufactured quartz that is topped by Henrybuilt’s bar block, a clever feature that acts as a partial bar extension while adding hidden drawers and outlets.

Loew’s goal, she says, was “to create a dramatic yet serene environment for an unfolding of life and nature.” She and her team began by laying out the floor plan on a grid, then layering the carpets, then the furnishings. “It allows for an open-plan, free-flowing feeling, but still anchored and grounded by a sense of place. I think that the underlying grid isn’t apparent, per se, but it is felt. And I think the strong cube-like presence of the Henrybuilt casework anchors the space, so that the vintage pieces, which are sculptural and weathered, can really shine. There is a sense of balance, where things are in their place, harmonious and not competing.”

This main space is highlighted by a wall of windows consisting of six 12-foot-high floor-to-ceiling sliding glass panels by Weiland (now owned by Andersen) that slide into a pocket near the breakfast nook. Because of the way the panels seal and interlock, it’s typical to start operation from the panel farthest from the pocket—near the living room’s window seat—to slide open the entire wall, but they aren’t designed for the other five panels to operate independently. “The owner, being as detailed as he was, desired to have the closest panel to the pocket operate independently of the rest, which is not normal, but made a lot of sense given the total door system width of 50-plus feet, and required additional detailing of the interlock,” Schreiber says. 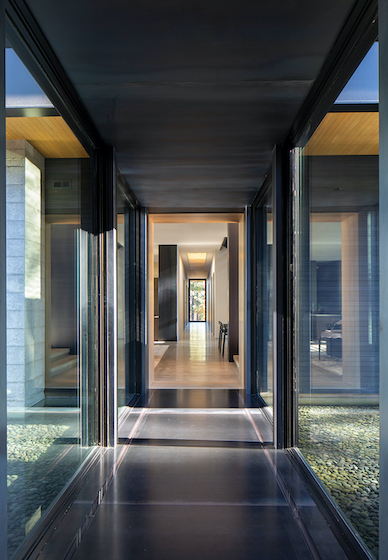 Schreiber originally told the owner that might not be possible. “He said, ‘Let’s figure it out,’” Schreiber recalls. “So we dove in.”

The Jim Morrison Construction team worked with Weiland to figure out a way to open the panel near the breakfast nook, without sliding open all six. It’s one of many examples of where the build team took additional steps to customize the home.

Another stunning example is the “link” that connects the public great room to the private master suite. Floor-to-ceiling glass looks out at the reflecting water on either side, giving the sense of passing through a forest stream, while hot-rolled steel forms the ceiling and floor, which is inset with linear runner lights.

“The link is a celebration of water as the organizing feature,” Walton says. “It’s interesting because it speaks to connection while also creating separation and privacy. It creates a memorable moment and a beautiful sense of passage to the master suite.”

Throughout the suite, floors are an end-grain hemlock. A dreamy closet features casework by Henrybuilt. In the bathroom, floating vanities are topped with white concrete integral sinks. A Japanese cedar hinoki soaking tub provides a tranquil place to relax. In the bedroom, a see-through fireplace opens to a sitting room on the other side.

“The finish on the fireplace element was a big discussion,” Schreiber says. The team intended to plaster over the fireplace, which was formed from concrete during construction of the structural wall. “The concrete was never meant to be exposed,” Schreiber says. “But the team got excited about the cracks and the imperfections—we decided to embrace its rustic nature.”

Thoughtful touches abound throughout the house. One such place is the stairwell. “The owner had a real love of architecture, which made the process very interactive,” Walton says. “He wanted to see what we could do to create a stair that didn’t have much articulation and appeared to be floating.” 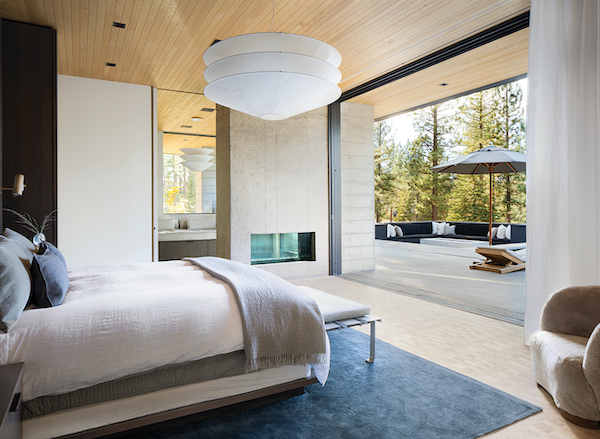 The master bedroom, which includes a see-through fireplace with a sitting room on the other side, opens to the pool deck through a large sliding glass door

To that end, the team created cantilevered stair treads anchored by sheets of metal that double as a railing. Upstairs are three guest suites, all well-appointed and offering views of the surrounding forest. “We kept to a narrow color palette—mostly shades of black—and played with textures and sheens,” Loew says. “And we brought in a lot of earthy, weathered antiques in metal, clay, stone and wood.”

Back on the main floor, a passage topped by skylights passes the laundry room, complete with a dog-washing sink, and leads to a huge bunk room. “There’re four bunks on one side and four bunks on another,” Schreiber says. “Twelve-foot-tall panels can slide out to separate it into the boys’ room and the girls’ room.” The room also includes dual bathrooms, each with curb-less shower floors made of polished concrete. Down this passage is an office as well as a media room that opens to the barbecue area outdoors.

Set in the rear of the home is the pool, complete with a built-in spa, as well as a lounge and fire pit near the master suite end of the home—plus an outdoor shower, around the side—with an outdoor dining alcove and a gas fireplace/asado grill on the other end of the pool.

“The site is fairly forested, which was both an attribute and a challenge,” Walton says. “Although shade isn’t ideal for pools, it creates a sense of privacy.” 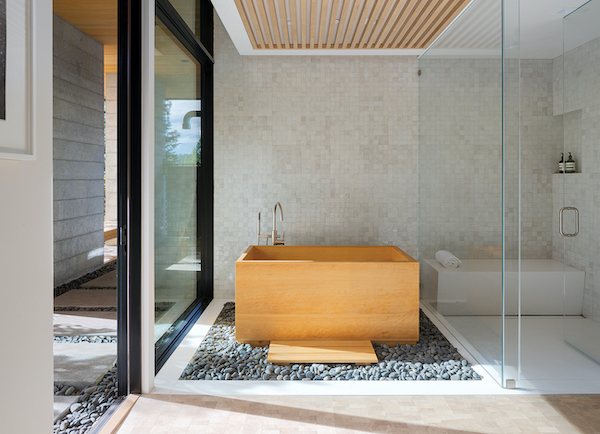 Schreiber and his team added waterproofing admixtures into the concrete, as well as used invisible topical elements. Acid-etched concrete is used around the pool deck and adds another layer of detail.

The homeowners were able to spend Christmas 2018 in their home, though final construction was completed the next March. With the various pre-construction revisions and multiple revisions in process, the home took three and a half years to complete, though the team believes the extra time and effort was well worth the reward.

“This project was such a deep dive with the architect, designer, builder and owner,” Schreiber says. “One might say it’s overly expensive or took too long to build. There’s something to be said for a project that is ‘easy.’ That just wasn’t this project. The result is a culmination of a client’s personal dreams, years of pre-construction, and detailed and constant team communication during the construction process in a home that we are all extremely proud of.

“I don’t think the ‘easy’ home is the one people want to tour and photograph. That’s not what wins these types of awards. It’s the one where the entire team is willing to dive in and do what’s necessary to bring dreams to fruition. That’s JMC.”