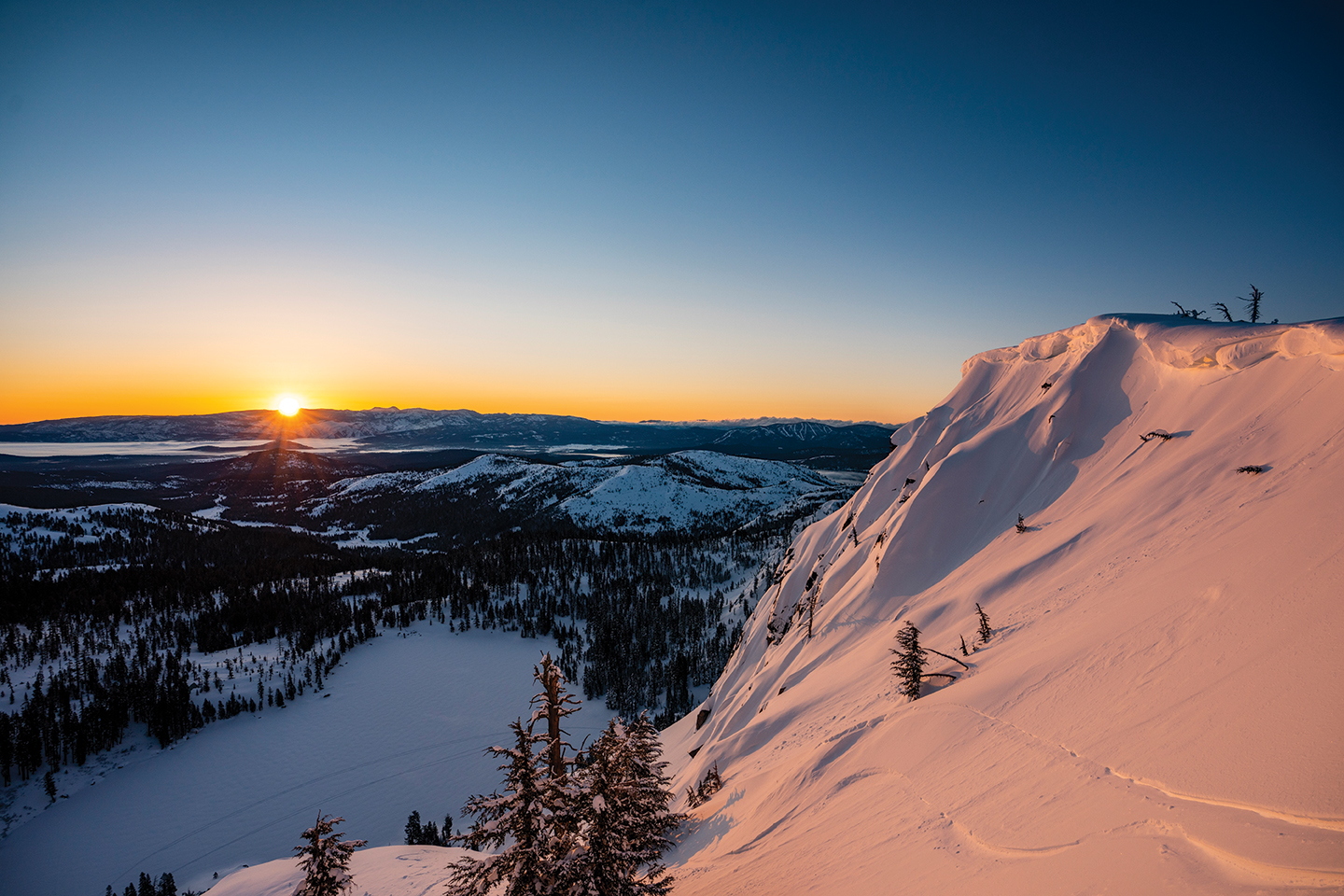 A Hut Above the Rest 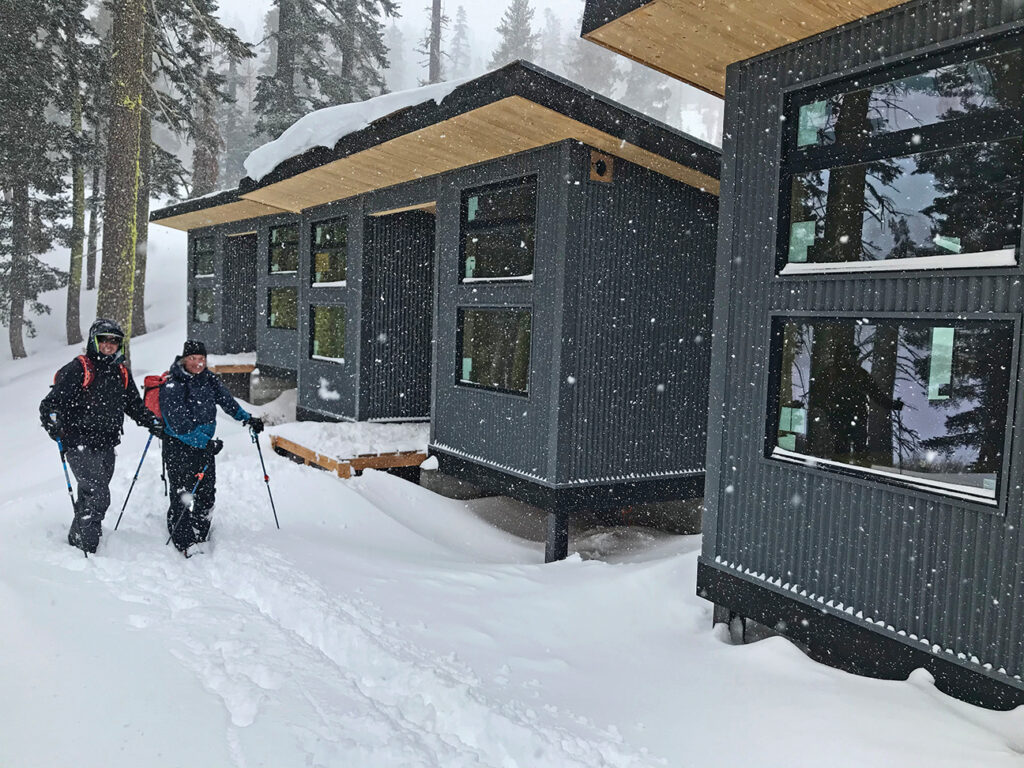 Designed by Sagemodern, the prefab huts feature a modern aesthetic, with shed roofs that deposit snow to the back of the buildings, courtesy Truckee Donner Land Trust

Pound for pound, there may be no structure that hosts more transcendent human experiences than the backcountry ski hut. Pit one of these humble shelters against the vaulted ceilings and stained glass of the Notre Dame Cathedral or the most majestic lakefront homes on Tahoe, and square foot for square foot, the ski hut may outpunch those heavyweights in pure life-affirming moments and awe-inspiring natural grandeur.

But despite their powerful allure, new backcountry huts are extremely rare, especially in California. When the Truckee Donner Land Trust purchased Frog Lake on Donner Summit, and the vision for a cluster of new ski huts materialized, a rare opportunity arose—to design modern buildings that both paid tribute to the ski hut aesthetic of the past and brought the idea firmly into the present.

The Truckee Donner Land Trust’s three ski huts—one eight-person hut, one designed for two four-person parties and one with space for two two-person parties—will open to backcountry adventurers this winter. What they will find is a magnificent reimagination of the Sierra ski hut, but with a design that stays true to the essential core tenants of these high-altitude refuges.

“We did something that was modern, but had vernacular forms that still work,” says Paul Warner, principal at Sagemodern. “We did not want to create a period piece that tries to match the historic structures.”

Nestled in the shadow of the sheer, imposing granite walls of Frog Lake Cliffs, with the beautiful expanse of Frog Lake directly out the front doors, the huts are like the wildest, fever-dream fantasies of Sierra Nevada skiers—sleek, clean, warm shelter in an alpine playground chock-full of ski descents both near and far. But little will tired skiers who gratefully stride into the cozy embrace of the new buildings this winter know—the huts almost never happened.

Huts or No Huts?

When the Truckee Donner Land Trust acquired the nearly 3,000 acres that include Frog Lake in 2020, the idea of a cluster of backcountry ski huts was not a primary consideration. In fact, the land trust at first had a far different idea for the summer structures that stood on the property, including a nearly 100-year-old stone house known as the Eschenbach House.

“There was one discussion that maybe we should just demo everything and return it to wilderness,” says Perry Norris, the retiring executive director of the Truckee Donner Land Trust. “And that made sense because the proposed Castle Peak wilderness boundary runs through the middle of the lake.”

But when it became clear what a demo would actually entail—the destruction of a cabin that was speculated to have been designed by D.L Bliss—other ideas began to surface.

“We thought it would be criminal to tear down this stone house that had been there for nearly 100 years,” says Norris.

Once the backcountry hut idea was settled on, the century-old stone building became central to the design.

“I didn’t want to compete with the main cabin,” says Warner. “We wanted to be deferential to the stone house, but not mimic it.”

The three huts were sited strategically at arm’s length from the stone house, giving the historic building its own space, but close enough to allow backcountry skiers to walk between the new huts and the communal gathering area and kitchen of the Eschenbach House. Meanwhile, the historic structure was renovated to feature vaulted ceilings, second-story entry (in the event of heavy snow), a brand-new commercial kitchen and a new roof.

The huts are situated on down-sloping terrain overlooking the lake, with corrugated steel exteriors and sturdy, steel-and-concrete pedestals that will disappear as heavy snow piles up.

Those who have been to any of the local Sierra Club huts in winter know the extreme snow loads those structures endure. During big winters, even the roofs of the two-story huts are buried, requiring a tunneling operation to even reach the elevated entries.

The Frog Lake huts will deal with the same weather. At 7,600 feet in elevation, powerful storms cresting the Sierra will unleash dozens of feet of snow in even normal winters.

This fierce weather—and no snowplow service to deal with it—was top of mind in the design. The roofs shed to the back of the buildings, leaving the lake-facing, down-sloping entryways free of additional snow. Grated steel steps eliminate stair-shoveling duties. Elevated west-facing windows will stay snow-free even in big snow years, offering sweeping views of the sunrise-illuminated Frog Lake Cliffs in the morning and sun-washed afternoon light at the end of each day.

The design team had to up the ante on the structural elements of prefab huts, using a sheet of solid, cross-laminated timber as the roof form—a sturdy, renewable and fire-resistant slab of pine that is both beautiful and powerful enough to stand up to the crushing winter weather.

“We have a lot of history of doing prefab in high snow load, but of course, nothing like this,” says Warner. “There is almost nowhere in the country with this snow load.”

Building in the Wild

While designing in the Frog Lake environment was a challenge, building was an even taller task. With a rugged 6-mile dirt road as the only access to the property, everything had to be thought through carefully. The exact dimensions of the prefab units were constrained by what could be hauled up the road on a 1-ton truck. The off-the-grid infrastructure had to be built from scratch—battery rooms, solar panels, wells and all.

Sagemodern’s experience in this realm paid off.

“A lot of times if you call and say, ‘We want you to drive a crane up 6 miles of dirt road,’ the phone hangs up. But we know these guys and they were up for the challenge,” says Warner, whose team worked with Truckee-based Daniel Goddard Construction.

Energy conservation, ever a goal on projects, took on a new level of priority at a location where every watt of energy, every drop of water and every flush of the toilet must be generated or disposed of onsite.

“We were calculating the use of water, the use of energy on everything. It is all precious, as it is everywhere, but especially here,” says Warner.

Meanwhile, the permitting process for a project unlike anything county officials had ever seen before presented its own set of challenges—and quizzical looks.

“The whole concept of a backcountry hut in the county permitting process has been a real curveball to them,” says Norris. “We were fortunate that we [were classified] under camps and camping.”

But outside of all the architectural and construction techniques, one overriding goal drove the project—to create the type of environment that makes huts all around the world so special. From the iconic huts of the Alps to the Refugios of South America and the stunning mountain hideaways of the Dolomites, each is defined by the communal experiences that are impossible to recreate in almost any other setting.

In fact, that interaction between hut-goers—where spontaneous song, wild stories, memorable meals and jaw-dropping displays of nature are all not only possible but likely—is what makes mountain huts special.

For Norris, a past climbing trip to the southern Andes served as inspiration. After summitting an extinct stratovolcano named Cerro Tronador, Norris retreated to a mountain hut exhausted from the challenging climb. He expected to gulp down a meal and fall asleep as soon as possible, but the scene that met him at the hut made it clear that sleeping would have to wait.

“There were parties from all different countries and all ages. There were alpinists and school groups. It was this cool experience. The school groups were singing songs and the hut masters were gregarious and welcoming,” says Norris. “I remember being dog tired, but I stayed up till 1:30 a.m. because it was such a good time and such a great experience.”

The vision for the Frog Lake huts is a North American equivalent of that experience. And design was a key way to make that vision a reality. The huts are welcoming, but spare enough to encourage people to walk the short distance to the Eschenbach House. There, the communal, commercial-grade kitchen, the towering granite fireplace and the map room all invite the kind of hut interactions that can turn a trip into an indelible memory.

“If you think about the communal table at a great restaurant, you are hopeful that people will talk to their neighbors, but they come from all over and the common things is the restaurant and that food,” says Warner. “But the communal thing here is the love of the outdoors and that place, and the stories that will be shared will be so rich.”

In that sense, the huts are like the bedrooms of a conventional home, and the Eschenbach House is the common space that makes a project special. The bedrooms create comfortable shelter from the storm and quiet moments in awe of nature. The communal space, which includes an expansive outdoor patio that was seamlessly enlarged by the construction team, is where the magic is.

“The environment is national park-caliber scenery,” says Warner. “It is amazing.”

As the Frog Lake huts take shape, Norris believes what is materializing will add to the long history of Sierra Nevada huts that will be remembered for generations. Like Timberline Lodge at the base of Mount Hood, it will leave a mark on the mountain culture, imagination and history of the Sierra.

“When the sun sets, the land trust is going to be remembered for this,” says Norris. “The lands we protect will be there. Our lands seamlessly blend into public lands and that is how it should be. But the few and far between infrastructure we build, the Webber Lake campground, Frog Lake, the bridge of the river at Truckee Springs—those are what this organization is going to be remembered for.”

That long-term vision of leaving a positive mark on the mountain range that has seen very few backcountry huts constructed over the past century is shared by Warner. He thinks about the stone house that has stood on the property for nearly a century, and how the huts he helped design will stand up to a similar length of time. 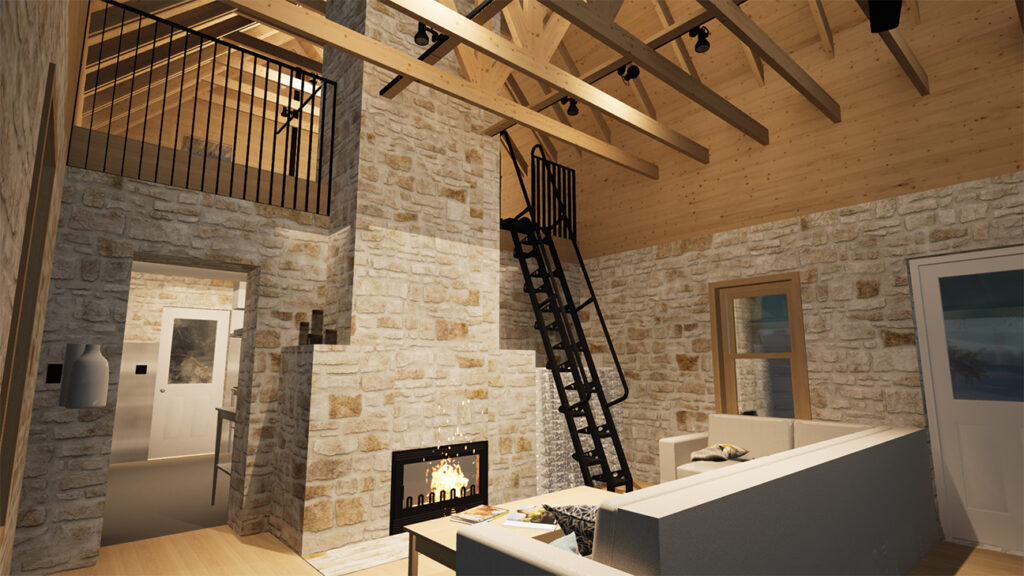 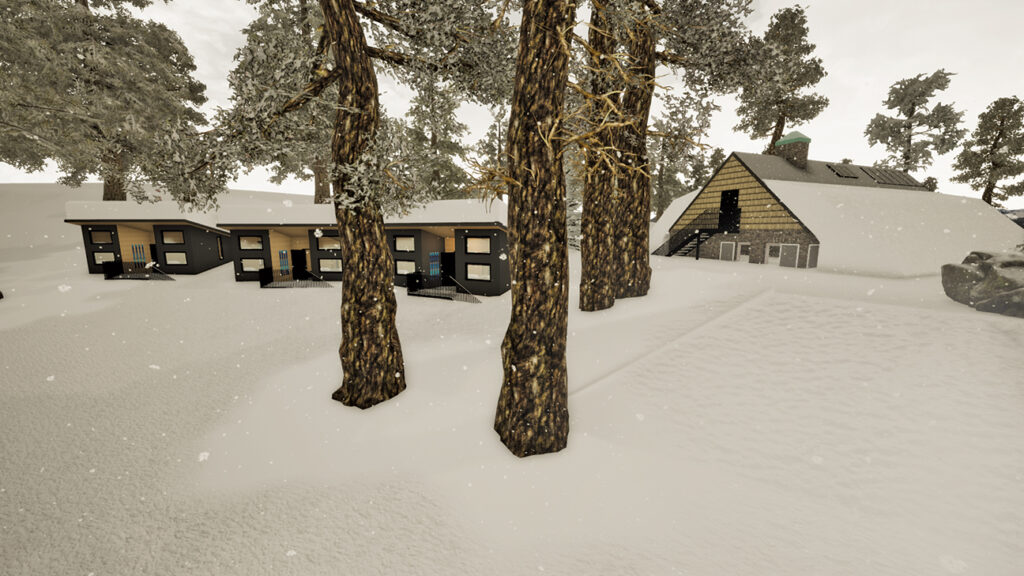 The new Frog Lake huts were built on down-sloping terrain with elevated entries to account for deep snow, while the neighboring Eschenbach House was renovated to feature vaulted ceilings and a second-story entry 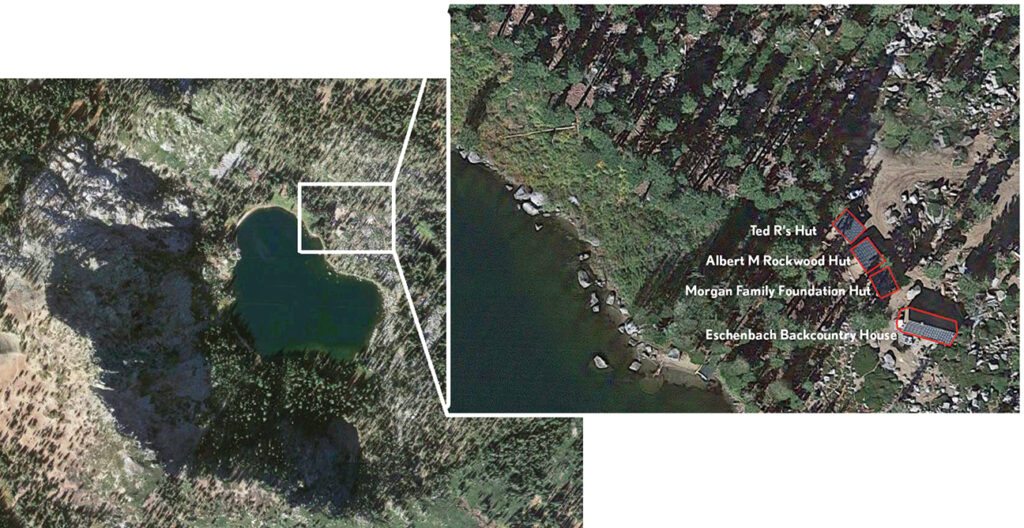