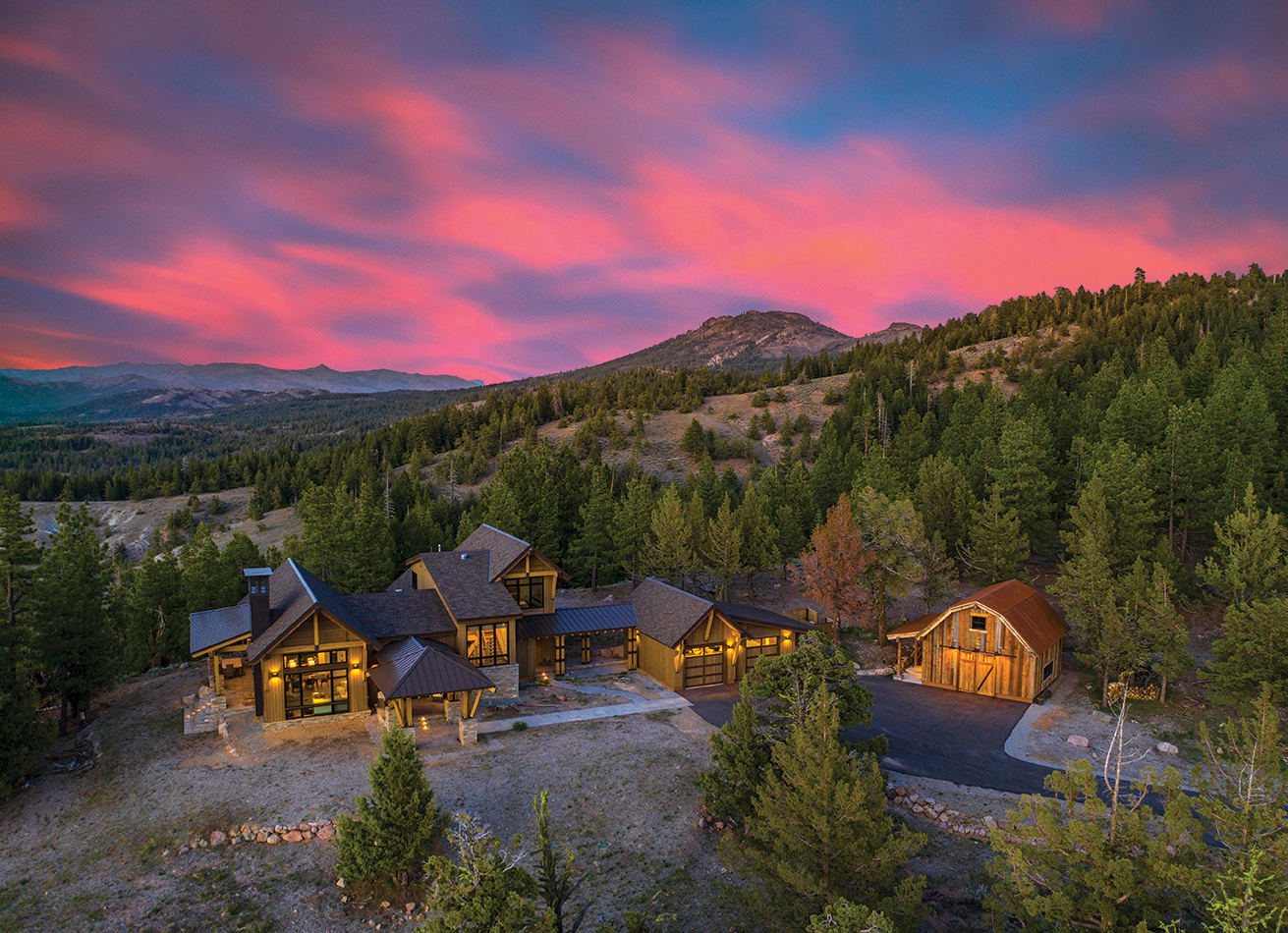 The home, sited on the highest lot at Nakoma Resort at 5,700 feet in elevation, features magical views across the Lost Sierra, photo by Ryan Salm

Elevated Living in the Lost Sierra

Certain home projects lend themselves to clever names. For the crew at Mark Tanner Construction, a fitting moniker developed as they brought to life a meticulously crafted custom home deep in the Lost Sierra.

“The Mark Tanner Construction team appropriately dubbed this home ‘Top of the World,’ and it lives up to its name in every sense,” says Tanner, describing the modest yet stunning 3,395-square-foot home in the developing Nakoma Resort community, located about 45 miles north of Truckee. 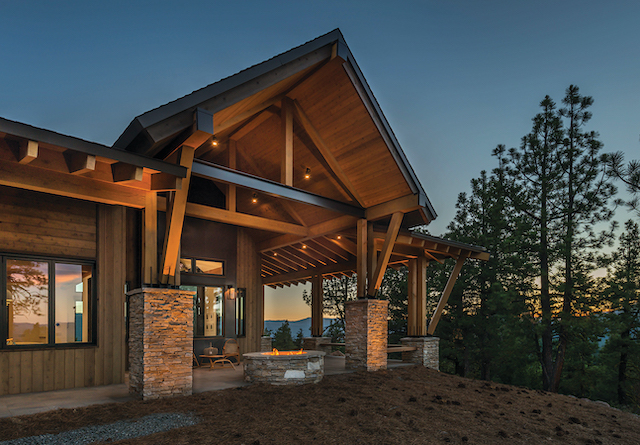 A covered outdoor living area off of the great room, which opens through an accordion glass door by Sierra Pacific Windows, photo by Vance Fox

It starts with the property.

Designed by Keith Kelly, principal of Truckee-based Kelly & Stone Architects (KSA), the home sits on 6 acres of wooded land near the top of a mountain, with zero neighbors and wide-open vistas across the peaks and valleys of the Northern Sierra.

“The site is exceptional. When you see it, you understand,” says the owner, who sought a remote lot that offered an escape from the Bay Area crowds. To ensure privacy, he and his wife doubled down by purchasing the neighboring parcel as well.

“I didn’t want my home 50 feet from my neighbor. Everywhere in the home where there are windows, you have a view that is open to everything. You’re not looking into a neighbor’s living room. You have views of the forests and mountains and high alpine meadows.”

Capturing the panoramic views was one of Kelly’s primary goals. Unlike a typical lot, however, where siting options are limited, the challenge on the sweeping property was finding just the right location for the best vantage point.

“The lot is amazing,” says Kelly. “That lot over here would have been millions of dollars because there are very few lots in Tahoe with those sort of views…  So it was a design challenge figuring out how to work with a chunk of land that large, with so many opportunities, and maximize the potential.”

The owners had a specific idea in mind for the home’s aesthetic. After interviewing a dozen or so architects before selecting KSA, they provided Kelly with a lengthy writeup detailing their vision, which blended modern elements with more traditional characteristics common in the Lost Sierra. 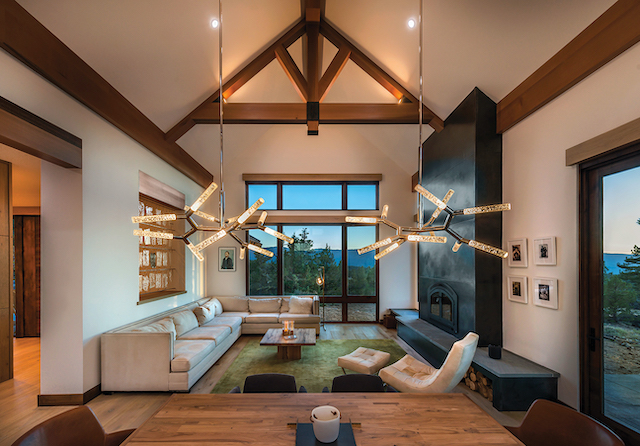 The resulting design features a handsome exterior clad in knotty western red cedar and ledgestone, with ample amounts of glass and metal, open trusses and gabled roofs. Inside—where interior designer Jaime Carter of Mark Tanner Construction collaborated with the owners—the home is clean and bright, with white walls and furniture set against the rich tone of clear cedar beams, hardwood floors and steel.

Many of the materials repeat throughout the interior. The clear cedar, for example, was used for both the solid structural trusses in the great room and the box beams in the kitchen, creating a cohesive look between the two spaces and providing “an almost redwood feel,” says Tanner, adding that clear cedar is not commonly used for trusses. A hot-rolled steel hood over the kitchen stove matches the fireplace in the great room, while a textured mushroom wood makes appearances on wall paneling, a barn door slider and custom mirror frames in a bathroom.

The owners worked closely with KSA and Tanner’s team from start to finish, overseeing every aspect of the operation with a critical eye and a perfectionist’s attention to detail. 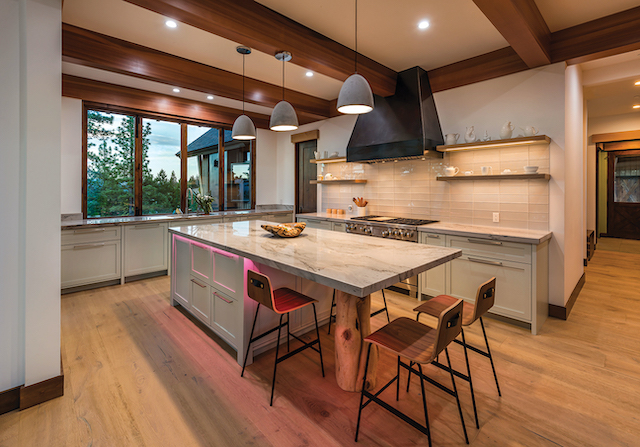 A Sierra juniper that was removed from the property became a post that helps support the kitchen island, which is topped with marble and lit by color-changing LED strip lights, photo by Vance Fox

“A reoccurring theme in the home was cleanliness and a lack of clutter,” says Tanner. “So it has very clean drywall returns into the windows, very minimalistic window boxes to hide the window coverings themselves, and then all the beam work and metal is very clean.”

The minimalist approach is apparent in every room, from the inconspicuous wood-storage compartments flanking both sides of the fireplace to a media room concealed behind a bookcase, which opens via a hidden mechanism. A small office space is shielded from view under the landing of a custom staircase, half of which is traditionally built-in and the other half free-floating. In the kitchen, appliances are hidden out of sight, strategically located in the pantry or behind custom rift-sawn oak cabinetry.

“They wanted the clean lines and didn’t want that many appliances to be seen, so it’s all tucked away,” says Casey Eberhardt, the project manager with Mark Tanner Construction.

The oak cabinetry resembles the color and knot structure of a nearby post made of Sierra juniper, which was used to support the kitchen island countertop. The wood is from a tree that was removed from the homesite during excavation. The owner, an electrical engineer by profession and woodworker by hobby, saved most of the trees that were cut on the property with the intent of repurposing the wood. 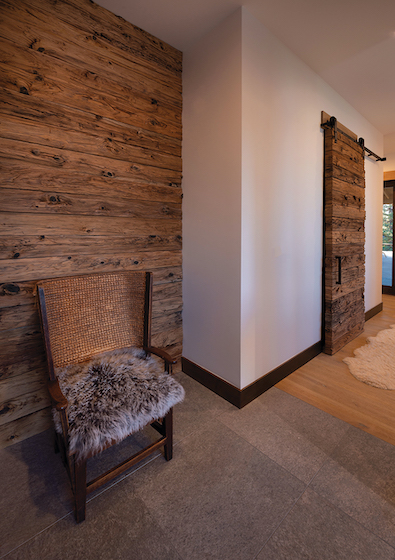 Textured mushroom wood by Trestlewood was used as wall paneling and to wrap a barn door slider in a hallway, photo by Vance Fox

“All the wood (juniper, cedar and pine) was put off to the side to season, and the owner is making furniture out of them in his barn shop, where he brought up a CNC machine and lathe,” says Tanner. “He’s been making a lot of cool stuff with that wood.”

Consistent with styles prevalent in the Tahoe area, the great room opens through an accordion glass door to a covered outdoor living area with a fire pit. The kitchen window opens in the same fashion to a covered barbecue area.

With the great room wide open, the owners, and their trusty Lab, have to be on their toes: They live where wildlife is more abundant than humans. In fact, early one morning, the owner spotted a large female mountain lion with two cubs patrolling about 60 yards from the home. So far, though, only squirrels and birds have intruded.

While the home’s design incorporates modern touches, the barn located just a stone’s throw away was designed to look like it’s been on the property for 100 years. Housing the owner’s woodworking tools, the barn features an exterior of reclaimed wood siding salvaged from the Mark Tanner Construction yard in Truckee.

“It’s all varying in width and depth and thickness, so it’s a very rough look,” says Tanner, whose team also used reclaimed corrugated metal from their yard (as well as collapsed barns in the Sierra Valley) for the roofing.

Barn door sliders that blend with the building open to a roll-up garage door. Just inside, a narrow, railing-less spiral staircase designed and built by the owner (with help from Tanner’s team) rises to the second floor, where he hoists wood and other materials for storage.

“The owners were highly involved in this project, and they had a lot of inspiration and things they brought to the table,” says Kelly. “There hadn’t been much construction in the area for a while, so when they came in they wanted something fresher. But while they had some contemporary tendencies, they also wanted a house that fit in the community and wasn’t going to stand out.”

From its stellar location to its quality design and fine craftsmanship, the home shines effortlessly on all fronts—and without a hint of pretentiousness.