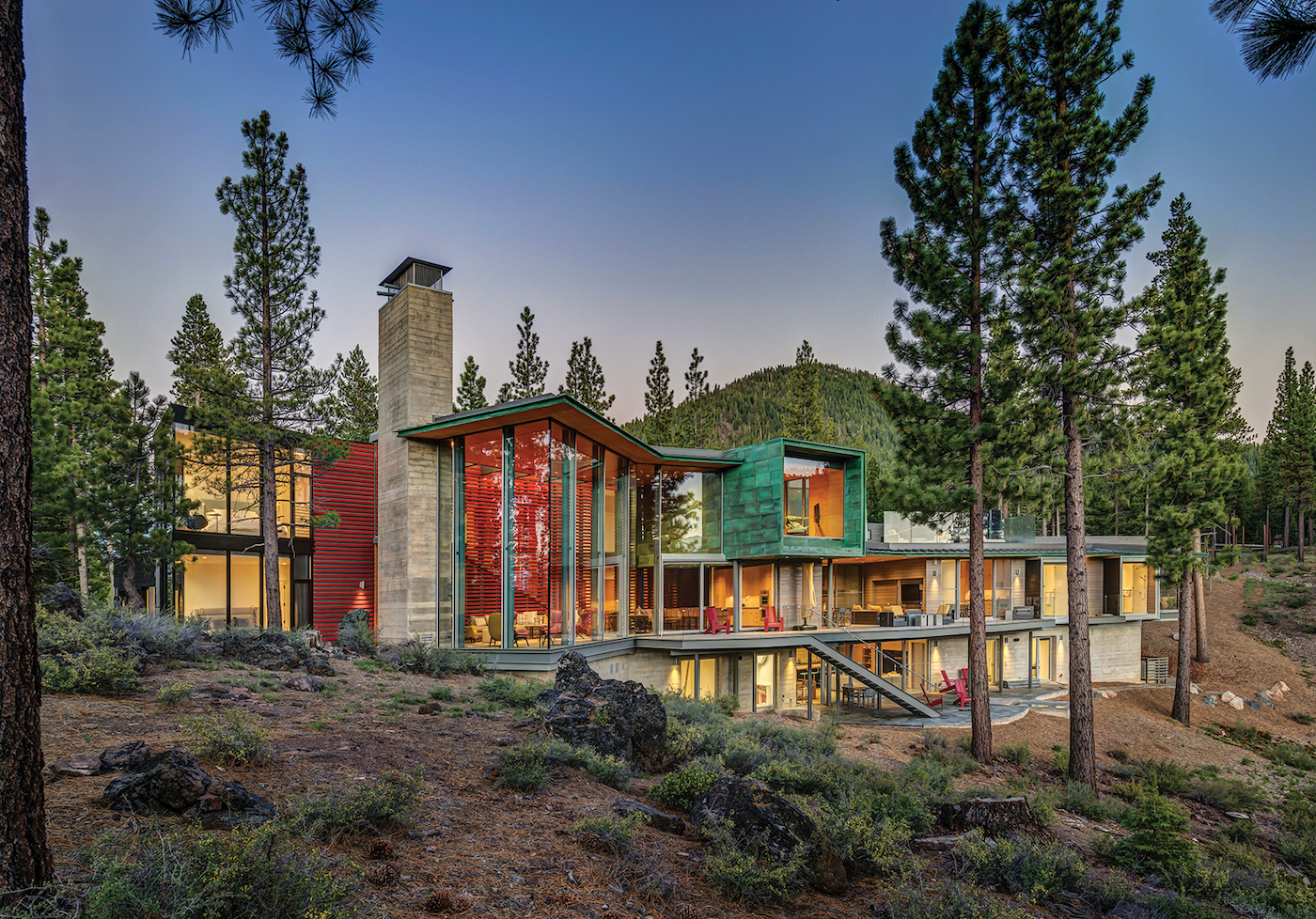 Comprised almost entirely of glazing and exterior living spaces, the view side of the three-story home takes in beautiful western vistas 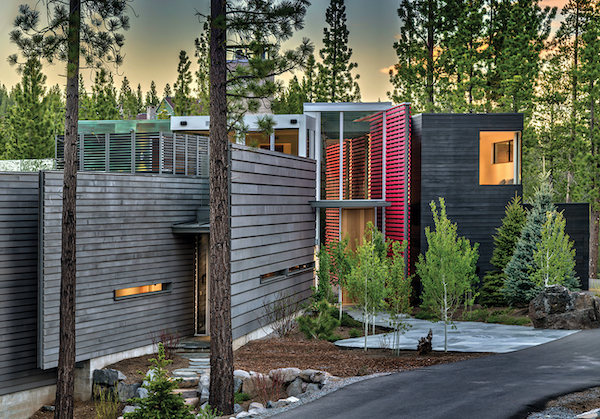 Legendary architect Mies van der Rohe is credited with saying, “We should attempt to bring nature, houses and human beings together in a higher unity.”

Architecture accomplishing this goal is almost instantly recognizable by the experience it offers: the natural environment, the structure and the people within it are equally celebrated, generating a synergy that goes beyond the singularity of any one of them. When you are in a home that has this quality, you know it.

“We walked the site with Peter and the owner, and there is a moment when you see the mountains in the distance and it feels like you are in this private, amazing, wild world,” says Mottola, whose team worked with Tahoe-based Loverde Builders on the project. “It’s probably one of the more compelling sites in the community because it backs up to open, preserved space.”

As a collector of exceptional residential architecture, the owner of the property found her way to Peter Bohlin as she considered what her family wanted their four-season mountain home to be. 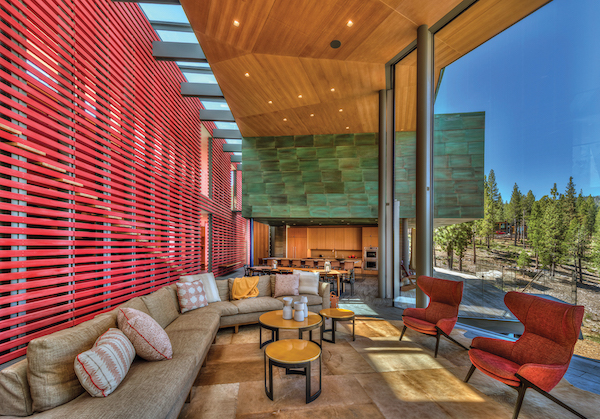 An almost 70-foot-long skylight runs the full interior length of the red wall, adding another dimension of natural lighting to the great-room space

“This is a legendary client,” says Mottola. “She’s worked with several really noteworthy architects over her life, and I think she genuinely enjoys that process of getting to work with what she calls ‘the masters’ of architecture.”

Bohlin unquestionably fits this category. With decades of practice and iconic projects—including the Liberty Bell Center in Philadelphia, Pixar Animation Studio in Emeryville and Apple stores throughout the world—BCJ’s work exemplifies the full spectrum of site-conscious, materially expressive architecture that is always people- and experience-centric.

The experience of this particular home begins with its iconic red wall. Clear cedar boards stained “Oriental Red” and organized as a 24-foot-high slatted screen run uninterrupted through the house, emerging again at the opposite side of the structure to connect critical portal points. The application of red on this defining, axial component is a signature Bohlin move.

“Peter likes to come back to a strong, striking color that provides a little bit of drama,” says Schofield. “It makes the experience special and unexpected.”

The red wall may be the initial eye-catching feature upon approach, but the house continues to unfold, layer after layer, with no less magic. 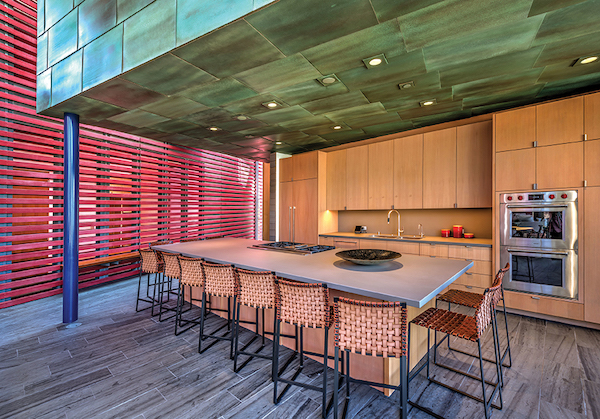 Copper tiles were pre-patina’d to a green finish to reflect and visually connect to the green of the open meadow to the west, while the circular steel column supporting the copper box is accented with a deep-water blue

“As you approach the property, there are scalloping walls of a charred, earthy gray, and they essentially dematerialized into the site,” says Schofield. “This movement scales the house down before you come into the dramatic main space that looks west to the Pacific Crest.”

As backdrop for the epic great-room space, the red wall notably contrasts with a green copper-clad box floating above the kitchen on one end of the room. A board-formed concrete fireplace and chimney handily hold the other end in place. Stretched in between the two geometric elements is a glass curtain wall over 20 feet in height, comprised of panels more than an inch thick and each weighing 3,000 pounds.

Full visual immersion into the layers of exterior space beyond is unavoidable: an open, sage-dotted meadow in the forefront, forested hills rolling west in waves, culminating with the Pacific Crest in the distance.

Two private, serene bedroom suites occupy the bookends of the first-floor layout. A truly spectacular outdoor living area (including a full kitchen) inhabits a generous sheltered alcove that spills out to a vast deck bound by glass panels. 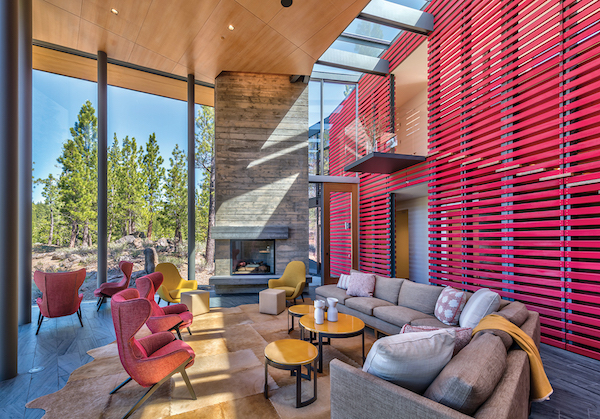 The boulder field, a defining site feature, is visible through the 20-plus feet of glazing. On the upper level, a cantilevered, glass-clad balcony extends through an opening in the red wall

The trip to the home’s upper level—essentially the owner’s private domain—continues the processional experience. Solid wood stair treads, appearing to float, are woven into the slats of the red wall. A pause point at the top of the stair cantilevers into the great room with an irresistible invitation to stop and take in distant views.

With a smile, general contractor Rich Loverde suggests, “You’re supposed to stand there and sing.”

Jay Steinmeyer, project superintendent for Loverde Builders, was on the job for two years and describes the building process, which was completed in 2019, as having unique complexity.

“If you look at the layout and everything going from inside to outside, it’s very complex,” he says. “You have to think about the direct correlation between the concrete outside and the layout of the interior stairs, for example. It takes a lot of advanced planning.”

The interior palette of refined, high-quality materials and the bouquet of mainly contemporary and mid-century furnishings were curated by Paul Wiseman of The Wiseman Group. 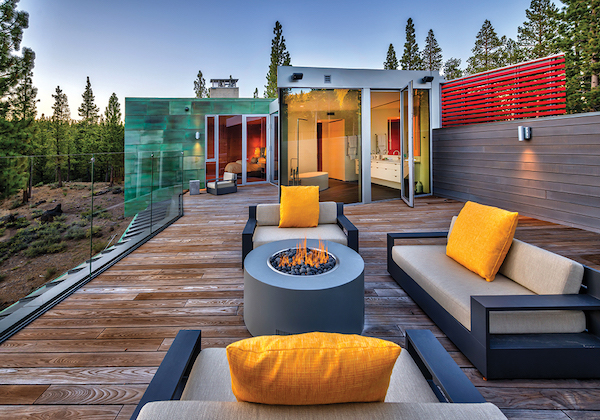 Private exterior living space is secreted away on the upper level, accessed exclusively from the spa-like bed and bath suite

“This owner has worked with Paul on every project she’s done,” says Schofield. “She brings in a different architect but always has Paul there to help translate her preferences and tastes.”

Simple detailing, flawless execution and the interplay of architectural components comprise a home that is as experiential as it is livable. And it definitely bears an architectural signature that was born from the beauty of the site.

“You would not design this same house on a different site,” says Mottola. “The owner wanted something special, and this home very much relates to its specific circumstances and really reflects her interests and desires.”

Vangela Wightman is a Truckee resident and longtime home writer for Tahoe Quarterly.