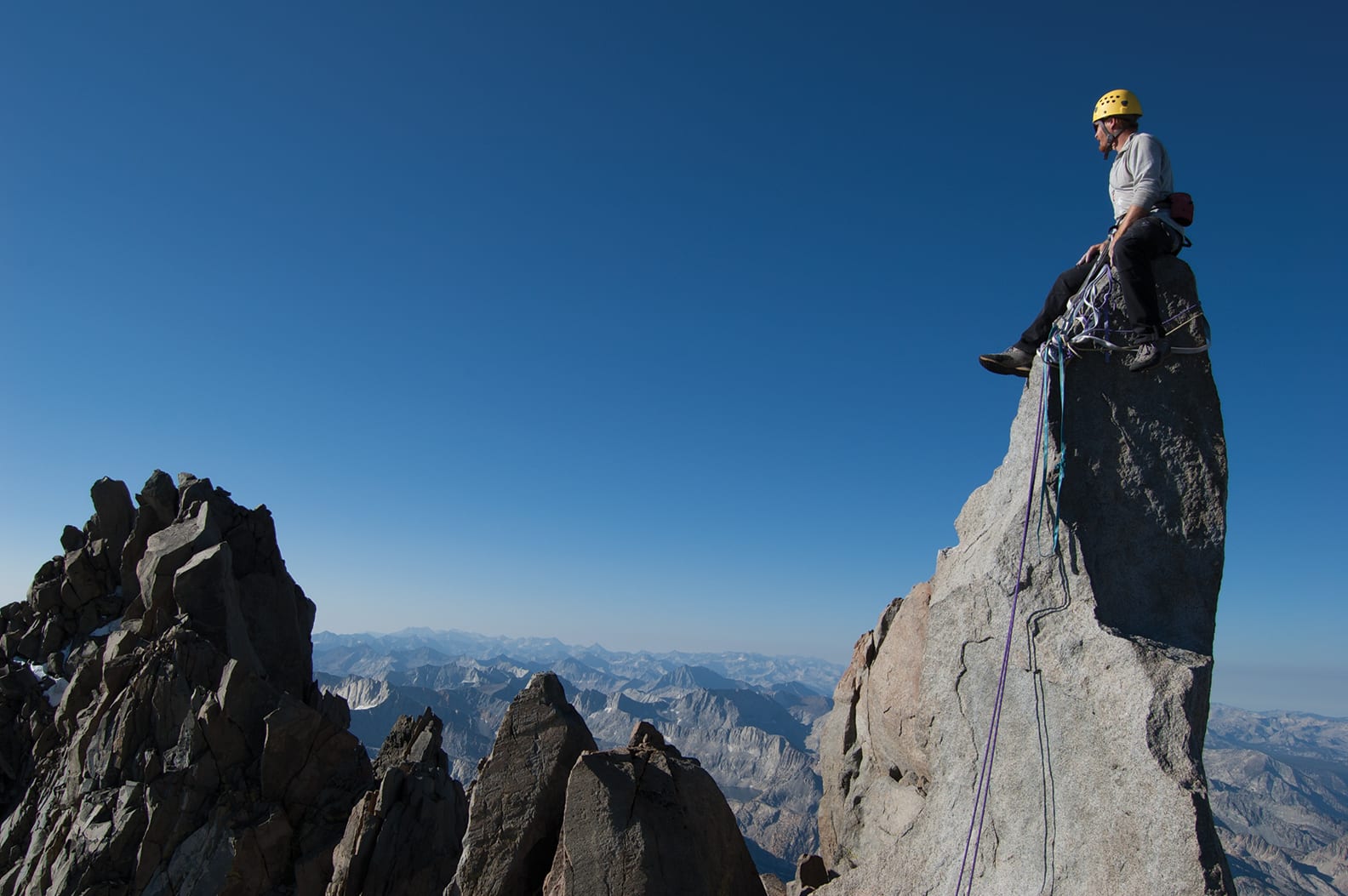 Two peaks down, three to go, Pete soaks in the view sitting atop the airy 14,200-foot summit of Starlight Peak, photo by Seth Lightcap

Perched on a narrow ledge, I lean out from the rocky mountain face to scan the terrain above me. I can see a scrappy corner that’s climbable, but the rock looks sketchy, too loose to risk messing with. There’s got be a clean line up the face somewhere.

I traverse a little farther on the ledge, craning my neck to see around a bulge in the rock wall. Boom! I spy the golden line—a blocky dihedral corner that cuts straight up the face. A couple tenuous moves guard the corner’s entrance, but my mind has already relaxed: I see hand holds, I see foot holds, I see summit.

The first hold I touch feels solid, so I pull down, lift off the ledge, and launch into the corner climbing ropeless up the easy but exposed fifth-class terrain. Any fear echoing between my ears is quickly tuned out by focused anticipation. A long-awaited High Sierra crown jewel awaits but 50 feet ahead—the 14,242-foot summit of North Palisade. Standing on top, North Palisade will mark our third 14,000-foot summit of the morning and the high point of our route, yet we are miles from the end of the day’s journey. 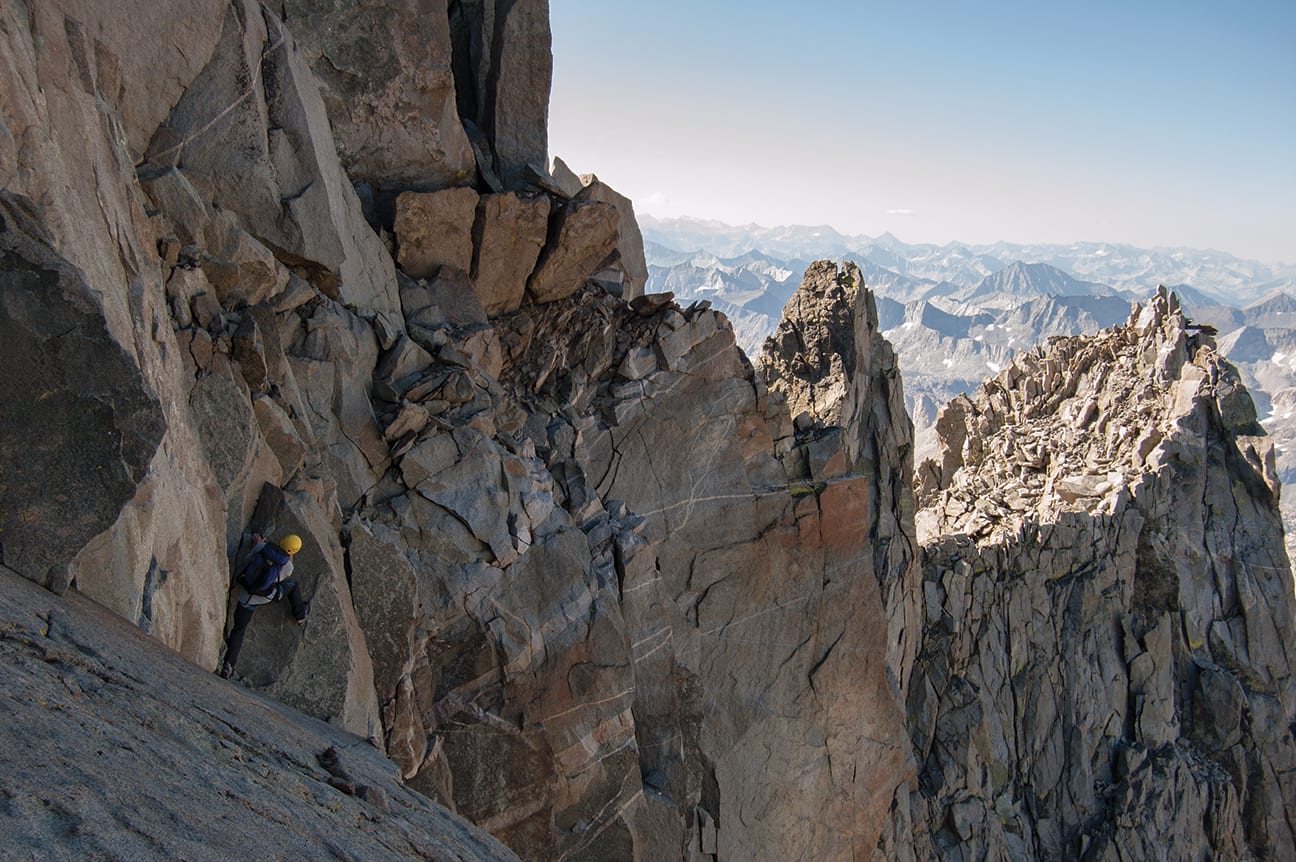 Does it go? Pete scouts a potential route up the summit block of North Palisade, the third peak on the traverse, photo by Seth Lightcap

Menacing yet mesmerizing, the mighty peaks of the Sierra’s legendary Palisades are undoubtedly one of the finest escarpments of alpine granite in the lower 48 states. There are worthy craggy crests in all the western mountain ranges, but few are as bold and lofty as the Palisades.

Looming high above the town of Big Pine on Highway 395, the north end of the Palisades is the 13,893-foot summit of Mt. Agassiz. The knife-edge Palisade crest continues south for 9 rocky miles before hooking east to the 13,388-foot summit of The Thumb. Along that precipitous crest, the ridge rolls and tumbles over six 14,000-foot summits—Thunderbolt Peak, Starlight Peak, North Palisade, Polmonium Peak, Mt. Sill and Middle Palisade.

For the capable alpine climber, these six stoic summits and the traverses between each one are the stuff dreams are made of. With solid horizontal ledge systems and few true vertical headwalls, you can scramble across the rocky crest enchaining peak after pinnacle with relative ease. Finding the “easy” route can be tricky and a few spots demand a rappel, but the required up and down climbing is never ridiculously hard. Tagging the intertwined summits of the Palisades has been an attainable goal since the early days of Sierra adventure.

All of the Palisades’ fourteeners were summited individually between 1903 and 1931, while John Ohrenschall and John Mathis became the first two men to traverse a majority of the treasured peaks in one push in 1958. Cruising along the crest for two days, the pair climbed five of the six fourteeners while riding the ridge from Thunderbolt Peak to Mt. Sill. Since Ohrenschall and Mathis’ visionary adventure, their path has slowly become the “regular” route among the many possible Palisade traverse variations. Current consensus pegs the ridge between Thunderbolt and Sill as the most elegant section of the Palisades, as it can be climbed in a single day and ticks off five of the six highest peaks. 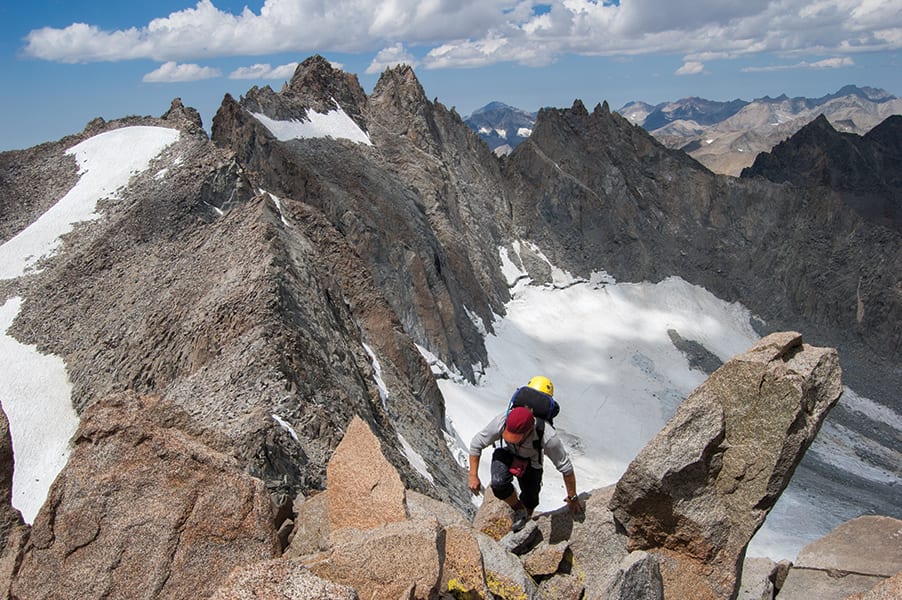 Looking back on the day’s journey from the 14,154-foot summit of Mt. Sill, the fifth and final fourteener of the traverse, photo by Seth Lightcap

I first laid eyes on the Palisades in 2000, my first summer wandering the High Sierra. The raw skyline of the Palisades looked terrifying to me at the time. I couldn’t fathom climbing across so much potentially loose rock above such mind-melting exposure.

While my eyes were blinded by inexperience, in my subconscious a fire was lit. I had a lot to learn before I could confidently walk among such Sierra giants, but deep down my curious spirit had already committed to standing on those six summits in my lifetime.

Fast forward 18 years and I still feel like a child in the mountains, forever learning how to move gracefully over rock and snow. My motivation for exploring the High Sierra all these years has routinely paid dividends in confidence and experience, however. As my eyes opened to the finer techniques of mountain travel, I continually put my skills to the test chasing after new summits. Although it took awhile, I’m honored to have now climbed all 15 California fourteeners, including the six stunning summits in the Palisades that I once feared. 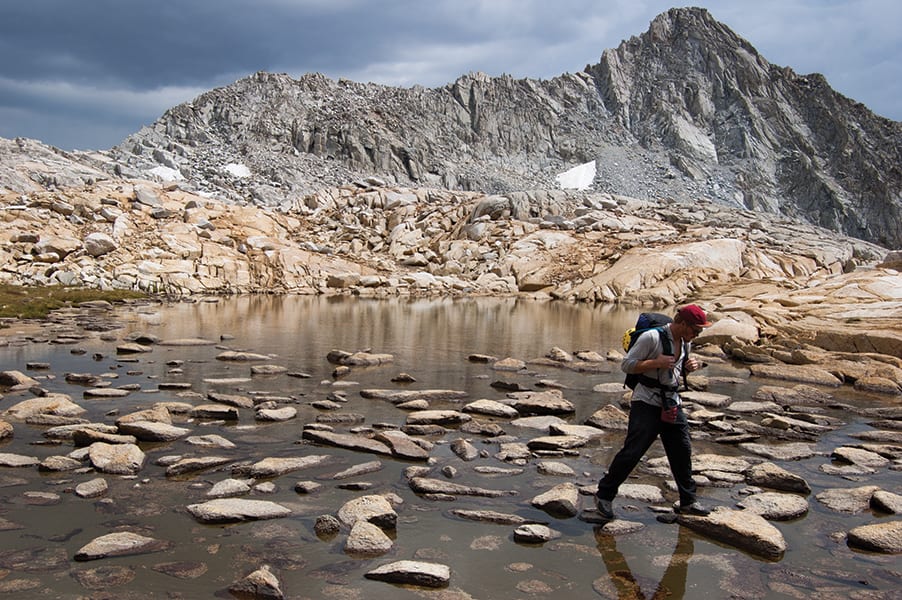 Pete hopscotches across a tarn on the west side of the Palisade Crest during the hike back to the trailhead, photo by Seth Lightcap

Completing the Palisade traverse stands as one of the longest and most committed days I’ve ever had in the mountains. Starting pre-dawn on a gorgeous July day, it took my partner Peter and me 18 hours to link the five summits, return to camp, then hike out to the car. We began the route climbing the southwest chute of Thunderbolt Peak with head lamps. The sun cracked the horizon right before we topped out on Thunderbolt, our first 14,000-foot summit of the day.

Traversing south from Thunderbolt, we spent the next eight hours climbing up, down and around the jagged High Sierra skyline at 14,000 feet. We free soloed a majority of the route, moving ropeless through exposed but only moderately technical terrain. The rope came out when we climbed the summit pinnacles of Thunderbolt and Starlight, and for a rappel off the summit of North Palisade. Our decision to climb unroped was reassured by the rock quality on the crest. We pull tested every hold we touched, but found few widowmaker blocks. The ridge was relatively solid, with loose scree on ledges to watch out for.

Stepping onto the summit of Mt. Sill, the final peak of the traverse, an unforgettable wave of satisfaction flooded my soul. Completing the traverse fulfilled a longheld Sierra fantasy. For the first time all day, we let ourselves lounge in the sunshine, soaking in Mt. Sill’s stunning summit view with a newfound appreciation for the inner folds of the craggy skyline.

The celebratory summit nap did not last long. Now 5 p.m., we had only four hours of daylight and double-digit miles to hike out. Some 5 miles of rough cross-country travel and 6 miles of trail hiking stood between us and the car. Our camp was at Bishop Pass, so we dropped off the crest to the west, rolling into a sea of granite and small lakes filled with freshly hatched tadpoles. For the next five hours we wove our way through talus and trail, crossing three mountain passes en route. We stumbled up to the car around 10 p.m, happily clocking out from a long day of nonstop movement.

Hard tellin’ what truly draws me to climb mountains. Best I can guess, it’s a blend of addiction and religion. I’m a fiend for the slow-drip adrenaline served up by climbing exposed terrain, and I have utmost faith in the transformative power of pushing your mind and body to the edge of earth and sky. Part communion, part crack pipe, completing the Palisade Traverse satisfied my every alpine desire. If you’re driven to stand on Sierra summits, this is an adventure that cannot be missed.

Seth Lightcap is a Truckee-based writer, photographer and avid explorer of Sierra rock, snow and trail. See more of his stories at www.sethlightcap.com.