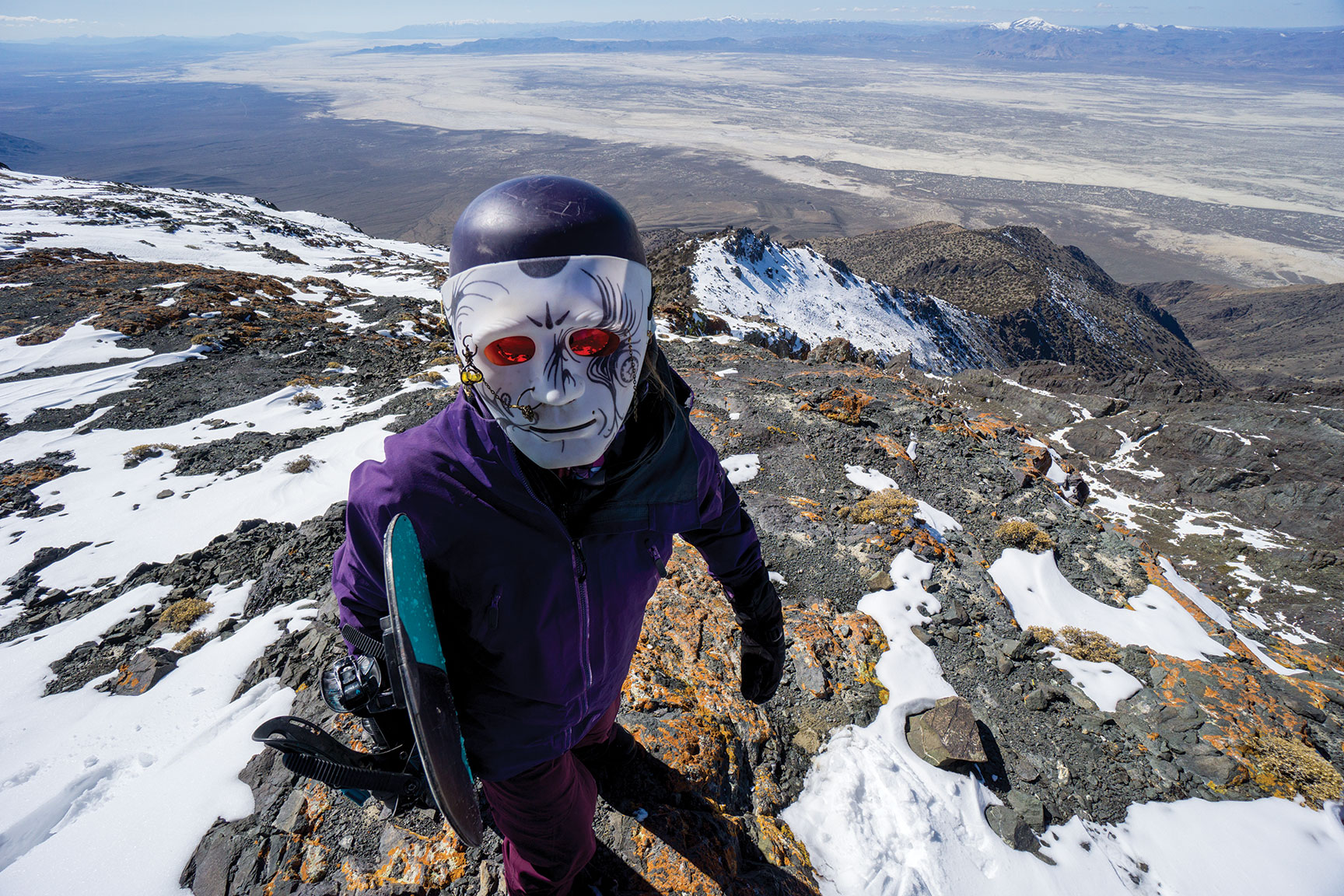 From dusty dance floors to summits, Allison Lightcap dons her lucky mask before dropping in above the Black Rock Desert

24 Sep Magic in the Mask

Sitting in the shade of a makeshift awning made out of an old vinyl billboard, we’re poured into our camp chairs like melted cheddar. The visceral desert heat wilts any ambition to move from our slumped positions. Icy drinks and breezy conversations are about all we have energy for. It’s also high noon, and the sun is set to vaporize mode, so no reason to move.

Perfect time to lizard out at camp during our annual pilgrimage to Burning Man, the famous counterculture gathering in Nevada’s Black Rock Desert.

Part art show, part rave, part temporary community experiment, Burning Man, or the “Burn,” as it’s colloquially named, is a gathering that unites 50,000 people from around the world to create an ephemeral city in the desert near Reno every September.

Known as Black Rock City, the fleeting metropolis is organized into hundreds of camps where friends live communally in a cluster of tents and RVs. Each camp offers some form of interaction, entertainment or enlightenment to other Black Rock citizens. Big, well-funded camps throw all-night parties in elaborate nightclub-like enclaves. Small camps might offer a free hug and a hot dog, if you swing by at the right time. 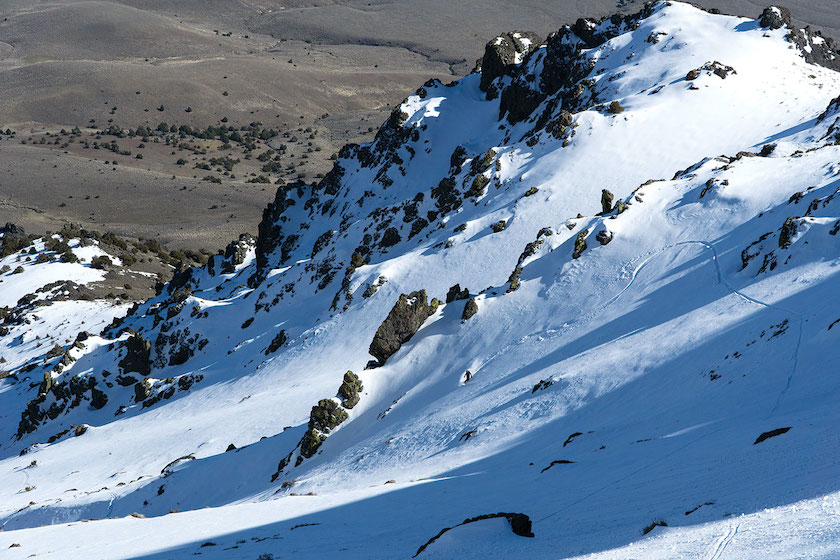 Our camp, a group of friends from North Lake Tahoe, is waking up after roaming the streets of Black Rock City until dawn. We’re hot and hungover, so conversations float dreamily from one hair-brained topic to the next.

“How rad would it be to snowboard down that steep gully on the peak to the left?!” says one of the camp crew.

The Black Rock Desert, or the “playa,” as it’s known to “Burners,” is a 1,000-square-mile expanse that sits at an elevation of 4,000 feet. It’s one of the flattest deserts on earth. Look to any horizon from the playa, however, and you see mountains—craggy, rock-strewn peaks, some rising up another 4,000 feet from the desert floor.

“Ooh, yeah, that would be epic. I wonder if those peaks ever get enough snow to ride?” spits back another daydreamer.

And that, my dusty friends, has always been the million-dollar question.

My wife Allison and I have gone to Burning Man the past nine years. We’ve always camped with a crew of snowboarders, and like clockwork, at some point during the Burn, we talk about snowboarding on a peak above the playa.

The curiosity is obvious because the mountains have zero vegetation, save for some scrubby bushes, and every peak is carved into wild gullies and ridges. Mind surfing the Black Rock horizon is all-time.

The thought of finding a rideable snowpack in the Black Rock sounds preposterous when it’s 100 degrees in the shade and even cocktail ice is a hot commodity, but come winter, it’s a whole different story. The Black Rock is classified as a semi-arid desert with average annual precipitation of about 7 inches. Most of that precip falls in the winter when temps can drop below freezing. The mountains collect snow every winter, just not that much, and what sticks usually melts in a week or two.

Snowboarding also comes to mind at Burning Man because of how we carve around the city looking for engaging art, music and people. Burning Man is not a music festival where you pay to get entertained. The Burn is all about participation, and everyone is expected to contribute in some way to the glorious madness that is Black Rock City.

How you contribute is your call, and, just like snowboarding, your contribution defines your style as a Burner.

One of our camp’s signature contributions is to creep through crowded dance floors and surprise people by dancing in their face wearing crazy masks. For the best reaction, we target people staring at their phones, or those obviously on another planet. The sight of the mask breaks their spell, and tempts them to interact, if only for the second they smile, laugh or scowl.

Our crew has a bunch of different masks, so we duck and dive through dance floors like we’re chasing around a ski resort together. The spontaneous interactions with random people that we soak up as we cruise around the crowds is creative summer shredding at its finest for us.

When COVID-19 first made news in February 2020, the thought crossed our minds that Burning Man might be canceled if the virus took hold in the USA. At that point we shrugged it off, but it also struck a chord. The potential of missing our annual Black Rock summer session inspired Allison and me to begin planning how to finally line up a winter adventure on the playa.

The stars aligned on March 11, four days before all the resorts in Tahoe closed for the pandemic. We loaded the truck and rolled east on Interstate 80, bound for the rough roads of the Black Rock Wilderness. Armed with splitboards and a hopefully solid spare tire, we weren’t totally sure of our destination, but we figured if it’s meant to be, it’s meant to be. As a good luck omen, Allison brought along her favorite Burning Man mask. 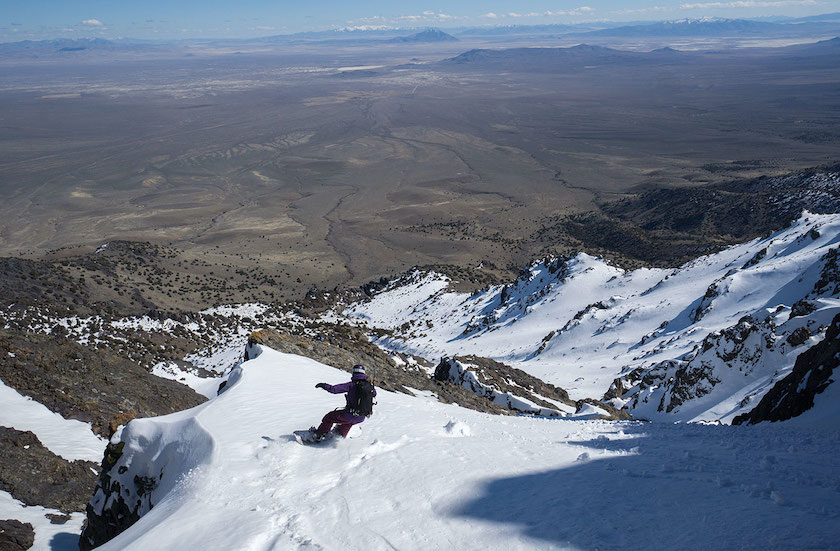 Allison Lightcap slices into the hanging face just below the summit

Living Out a Fantasy

The mask must have peaked our playa karma, because what we found was exactly what we had fantasized about all these years. There was a surprisingly deep snowpack clinging to the highest peaks above the Black Rock.

After hiking up 1,000 feet of steep brush, and spooking a pack of wild horses, we gained a protected cirque of steep chutes that was much bigger than we anticipated. Another 2,000 feet of touring and a quick bootpack brought us to the summit ridge looking out over the Black Rock. It was a vantage we’ve sought for a decade—a bird’s-eye view of this geographical oddity that we’d only experienced from ground level.

Gearing up to drop in, we came across a ladybug hatch. As a thousand good luck charms flew all around us, we strapped in and started our descent down an exposed ramp that peeled straight off the summit. The ramp led to a small saddle in the ridge and the entrance of a narrow passageway accessing a steep face above the cirque we climbed up.

Slicing turns around shallow rocks, we hovered down the face before opening it up and slashing into deeper wind-sculpted waves in the cirque. Our dream of shredding the Black Rock had finally been realized, punctuated by plumes of petrified desert pow.

Burning Man 2020 was officially canceled a few weeks after we returned from our desert adventure. The turns we ripped above the Black Rock won’t replace our missed days shredding dusty dance floors this September. But in this upside-down year, we’re beyond grateful to play on the playa in any season.

Seth Lightcap is a Squaw Valley–based writer, photographer and avid explorer of Sierra rock, snow and trail. See more of his stories at www.sethlightcap.com.