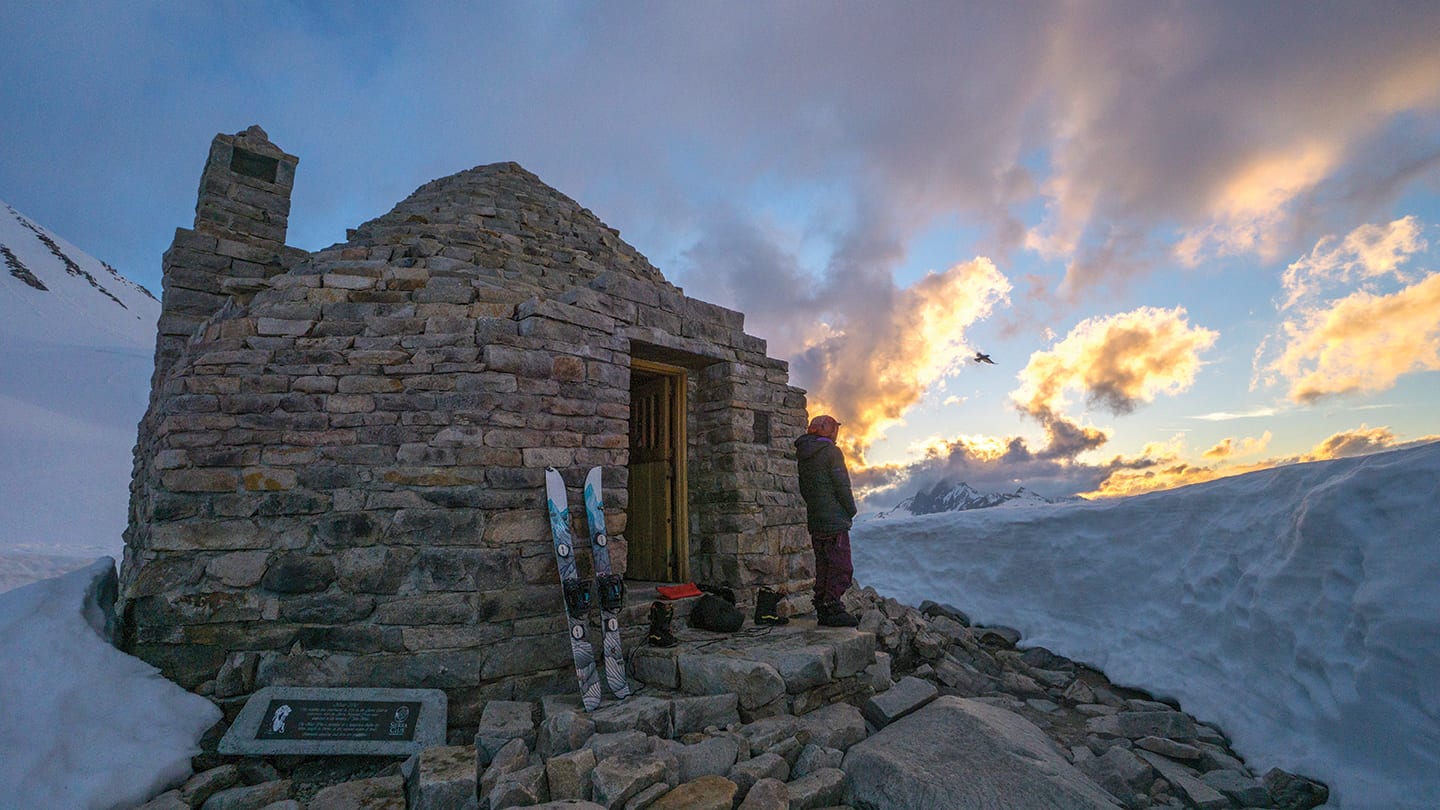 Sitting on our gigantic backpacks, our shoulders feel like Celtic knots, painfully twisted. Ten hours of ski touring carrying 50 pounds of winter camping gear has turned my wife Allison and my once-supple torsos into tough, overcooked meat. Daylight is fading fast, but we have forced ourselves to stop and give our rubbery bodies a break on the shore of a frozen lake.

Slowly gnawing on our energy bars, we look longingly to the top of the slope ahead, our last climb for the day. A half-mile of steady uphill stands between us and our destination.

“It should only take us 20 minutes, 30 tops,” I say to Allison in a trying-to-be-energetic tone. She doesn’t respond. No need to. We both know it doesn’t matter how long it’s going to take. We’ve come too far and we’re too close not to push on.

It’s June 5, and Allison and I are on day two of a five-day High Sierra splitboard tour. In a normal year we’d be riding our mountain bikes by now, but thanks to the massive 2019 winter, the high country is still buried in snow and ski touring conditions remain primo.

The route will take us past dozens of remote peaks, most holding epic snowboard descents. Our hope is to knock out all the mileage in three days, giving us two days to climb and ride wild lines deep in the heart of the High Sierra.

No summit is motivating us to keep trudging into the dusk today though. On a typical tour, we’d have already pitched our tent, kicked off the boots and given in to the suffering of our shoulders. But this is no typical tour. As gruesome as it will be to pick up our packs and keep moving, this last push will land us at one of the most revered sites in all the Sierra—the John Muir Memorial Shelter. 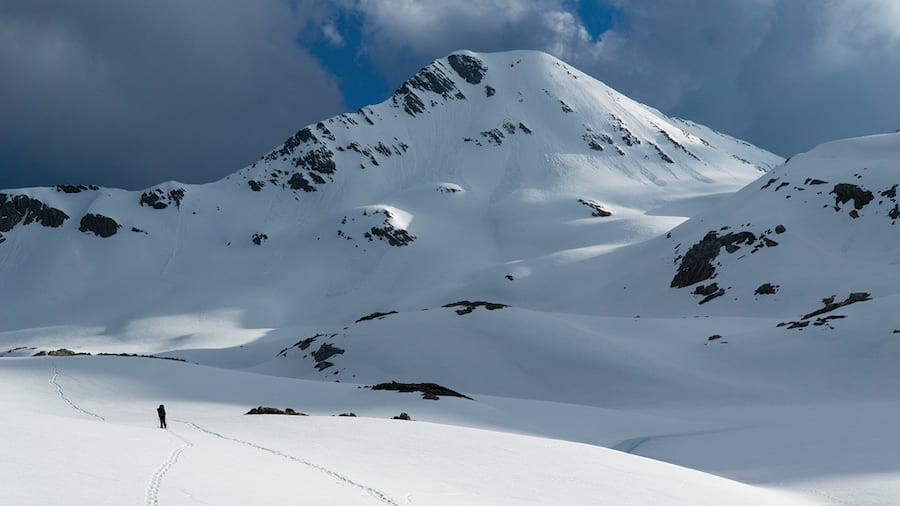 Perched atop a pass at 11,955 feet, the John Muir Memorial Shelter, or Muir Hut, as it’s often called, is an incredible and improbable granite structure. The hut was constructed by the Sierra Club in 1931 to serve as both an emergency shelter for hikers and a memorial to John Muir, the Sierra’s greatest conservationist.

The idea to build the shelter was William Colby’s, a veteran Sierra Club employee who worked for the organization for over 60 years in various positions, including club secretary, outings leader and president. Colby was inspired by the February 1930 issue of National Geographic, which included an article about the trullo, a unique stone hut design native to the Apulia region of southeastern Italy.

Identified by its conical domed roof, the trullo first appeared in Apulia in the fourteenth century and was built by agricultural laborers throughout the next six centuries as both shelters and storehouses. The structures were traditionally built using a dry stone technique that’s been around since Neolithic times. The limestone bricks used to form the walls and roof were put in place without any cement or mortar to bind the stones together.

Impressed by the unique architecture, Colby dreamed of erecting a granite version of a trullo hut somewhere in the Sierra to honor Muir. To build a trullo-style hut that could withstand harsh alpine weather, Colby enlisted the help of Bay Area architect Henry Gutterson. The Sierra Club commissioned Gutterson to transform Colby’s idea into a buildable blueprint for a “bombproof” shelter. With Gutterson’s blueprints in hand, Sierra Club members stacked the first stones for the hut in summer of 1930, and construction was completed the following year. 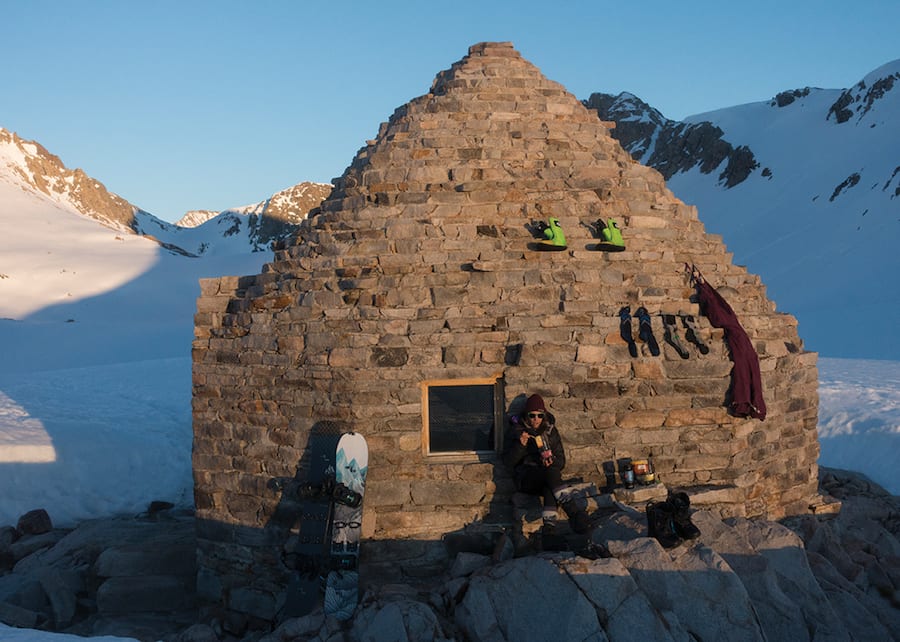 Built by the Sierra Club in 1931, the Muir Hut has been a welcome oasis for High Sierra explorers for nearly 90 years

The Sierra Club chose to place the hut on a pass overlooking the Evolution Valley, a wide expanse that’s dotted with emerald lakes and surrounded by jagged peaks. Now known as Muir Pass in Kings Canyon National Park, the hut’s location marks the approximate midpoint of the 214-mile John Muir Trail. Construction of the John Muir Trail, which traces a path from the summit of Mount Whitney to Yosemite Valley, began in 1915 and was mostly completed by the time the Muir Hut was built some 16 years later. Colby, who was a champion of both projects, remarked that, “The rugged scenery characteristic of the High Sierra seems to reach its climax at this spot, so fittingly named for John Muir.”

Though the shelter is only a single 16-by-16-foot octagon-shaped chamber, the look and functionality of the hut’s design are undoubtedly unique. From the outside, it resembles a beehive. Looking up from the inside, the 16-foot-high ceiling is reminiscent of a spider web. From either view, the roof displays a most natural sacred geometry in practical form.

The Muir Hut’s other striking feature is the wide stone benches that line the perimeter of the inside walls. Whether using the shelter to escape a storm for the night or just to have lunch out of the sun, the benches add strategically engineered efficiency to the hut’s floor plan. There is also a commemorative plaque on a decommissioned fireplace mantel that celebrates the legacy of Muir and Colby, as well as the hut’s nomination to the National Park Service’s National Registry of Historic Places in 2016. 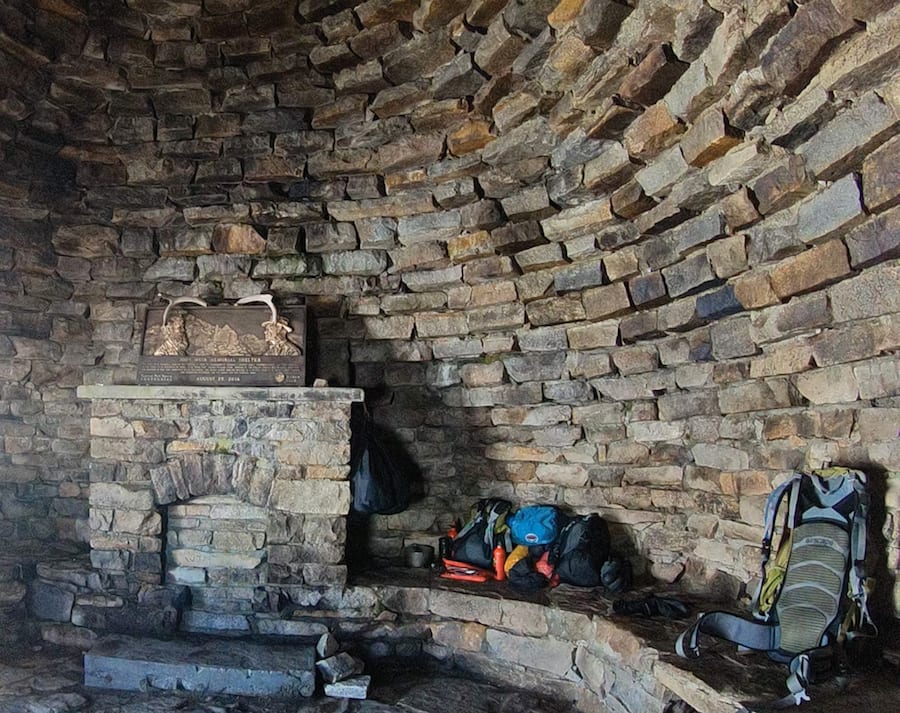 Mesmerizing brick work and stone benches inside the Muir Hut

Our arrival at the Muir Hut that June evening was not our first. Fourteen years earlier, Allison and I had skied out to the historic shelter on one of our first extended Sierra ski tours. The hut left an indelible mark on us, not only for its amazing vibes, or the fact that we’d gotten engaged on its front steps, but because the stunning peaks surrounding it held phenomenal backcountry snowboarding terrain. We did not have the chance to make the most of our hard-earned location, however, as we gave ourselves barely a day to tour around the hut before we had to keep moving.

This trip, we have come much better prepared. We have more time, more backcountry skills and more motivation to explore. Now, all we need is some dinner and rest.

For one, it’s technically forbidden to stay overnight inside the Muir Hut unless you are facing an emergency situation. This National Park Service regulation was created because the Muir Hut is a highlight of both the John Muir Trail and the Pacific Crest Trail, two of the most popular trails in the world come summer. By asking hikers not to sleep inside the shelter, it reduces the amount of human waste and gives everyone the opportunity to enjoy the hut when they walk by.

The second reason we’re reluctant to sleep is the unmistakable odor of mildew lingering in the air. The hut smells pretty dank. In the end we decide that we’re dangerously tired, so it will be safer to nap on the stone benches for one night, get up early and then move camp down valley the next day after touring.

We wake just after sunrise following a restless night of sleep. Giddy excitement overcomes any grogginess, as the plan for the day is to tour yet deeper into the range and explore one of the most remote regions in all of California, the Ionian Basin. Having only been accurately documented in the 1950s, the Ionian Basin was the last Sierra region to be mapped. It’s also the home of Mount Goddard, a 13,563-foot peak with a spectacular ski descent on its southeast face. Goddard was one of the last major Sierra peaks to be summited and is known to have one of the best views in the range. 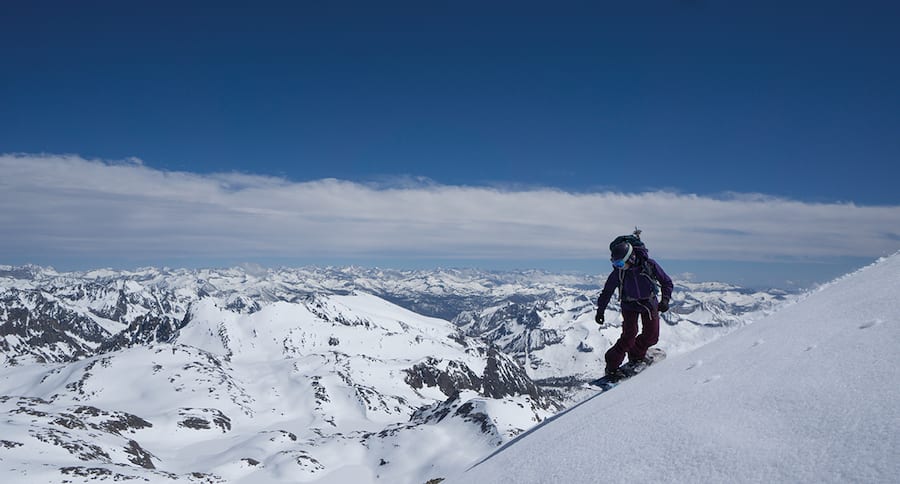 Allison drops in from the summit of Mount Goddard

Unbelievably smooth snow conditions greet us as we leave the Muir Hut and begin our tour into the Ionian Basin. There’s not a suncup in sight and all the lakes in the Evolution Valley are still completely frozen over. After an unseasonably cold May, this interior region of the High Sierra has barely begun to thaw out from its deep winter freeze. 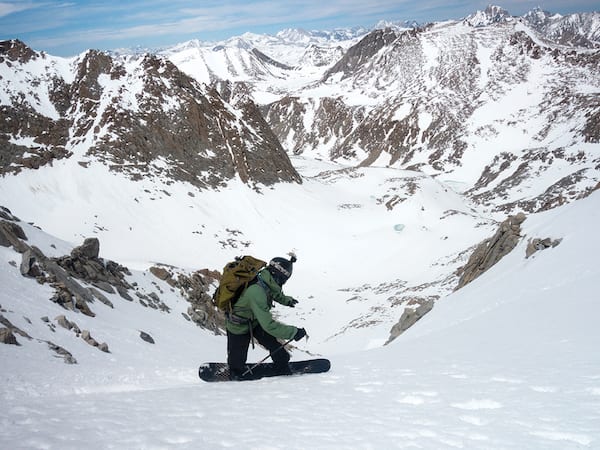 Allison and I take turns setting the skin track climbing up and over a pass that accesses the north side of the Ionian Basin. One more hop skip over another pass and we drop to the base of Mount Goddard. The sun is beaming and there is a light wind that gives us confidence in the snow conditions. Temps are warm enough to grow perfect corn snow, but not so hot to make wet-slide avalanches a concern. It’s truly the perfect day, and we’ve got a peak we’ve been staring at for 14 years squarely in our crosshairs.

A dozen switchbacks up the side of the face and a short bootpack lands us on the summit of Mount Goddard. The views in every direction are beyond breathtaking. Goddard’s prominent position, smack dab in the heart of the range, offers a perspective on the High Sierra unlike any we’ve ever earned. Gazing out at the main axis of the range from Mount Whitney to Yosemite, we see a dozen peaks we’ve stood on top of and hundreds more we’ve yet to touch.

Strapping into her splitboard with a grateful smile, Allison drops in first, ripping huge turns off the summit like she’s racing down a run at a resort. The snow sizzles like popcorn beneath her board edges as she blows past me, and within seconds she’s just a speck at the bottom of the face. I take in the summit views one more time and follow her lead, flying down the face slicing turns in perfect spring snow. Regrouping at the bottom, we both agree that it was one of our best Sierra descents ever. 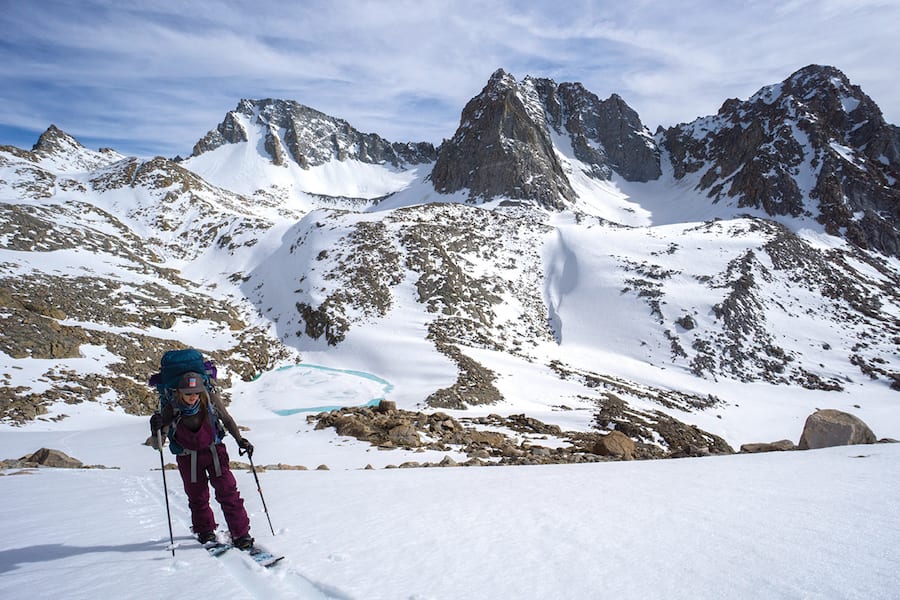 Moving On, Looking Back

We spend the late afternoon lounging in the sun at the Muir Hut before loading up the packs and cruising down valley to camp at a lower elevation. The next day we part ways with the John Muir Trail and climb to our final camp at the base of Lamarck Col, our exit route back to the trailhead. The final day of our tour we climb another proud 13er, Mount Darwin, and lay tracks down Darwin’s north face before rolling over the pass and shredding back to the car.

Driving home to Tahoe that night, we can’t stop gushing about our good fortune and the sublime beauty of what we’d just witnessed. After 14 years, our return trip to the Muir Hut had unlocked one of our most magical wilderness experiences of the year. The John Muir Memorial Shelter will forever be the gatehouse to our most sacred slice of the Sierra.

Seth Lightcap is a Squaw Valley–based writer, photographer and avid explorer of Sierra rock, snow and trail. See more of his stories at www.sethlightcap.com.