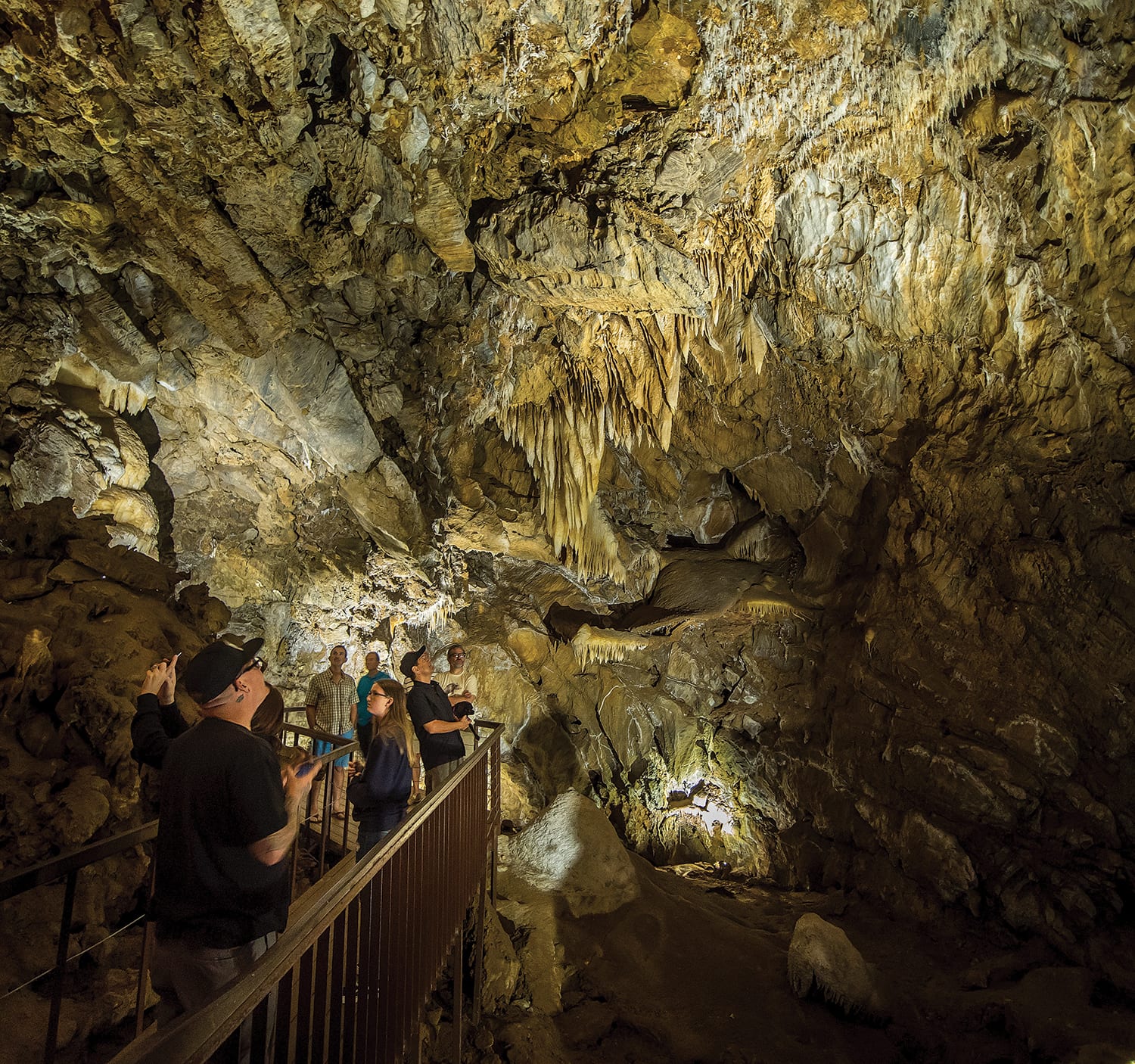 A tour group explores Black Chasm Cavern near the town of Volcano, photo by Martin Gollery

Caves harbor secrets so intriguing that spelunkers will go to extreme lengths to uncover them. They will search for days to find a hidden opening or dive into unforgiving darkness. They will squirm through tight tunnels and narrow crevices based on nothing more than a rumor.

I was hooked by such a secret. Somewhere near Truckee an ice cave was rumored to exist, and tantalizingly faint digital clues to its location drew me like a bat.

The details I could gather were intriguing. The cavern was rumored to hold ice all year. Its entrance, which is kept confidential by locals, was apparently a small opening in a boulder field just south of town.

A quest for more precise information led to several digital dead ends. But then, finally, a breakthrough. A Truckee local who had explored the cave sent GPS coordinates and images of the area. Bingo.

My partner and I loaded up our helmets and headlamps and set out on dirt roads in search. We got out of the car and hiked down a slate-covered hillside. The skateboard-sized rocks shifted and moved under every step. Eventually, the coordinates led us to a telephone pole, the greasy wooden post rising from the gray slate like a lonely dismembered tree. There was no sign of a cave opening. No big deal. A small setback.

We downloaded the images the local had sent and carefully compared them to the landscape. Nothing matched. The angles on the horizon were all wrong.

We returned to the car and drove the dirt roads scanning the photo for clues. We parked and hiked until the features on the horizon were at the correct angles. A tree looked similar to the one on the right side of the picture; the crumbling cliffs framing the left side of the image seemed about right. The opening had to be close. 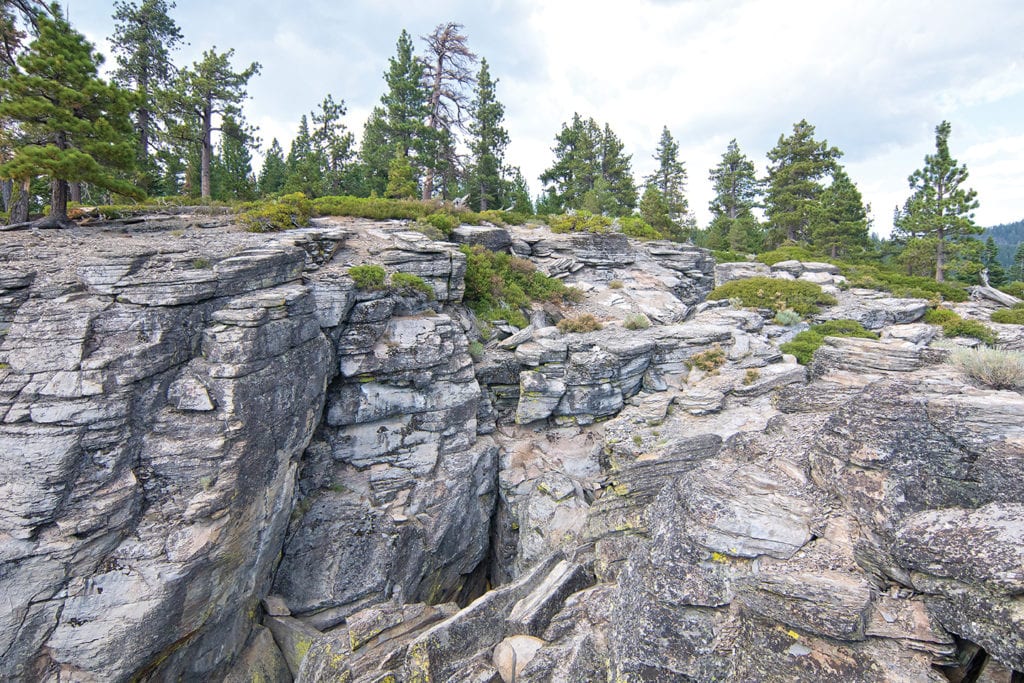 Hours passed. Still, no cave. It could have been just around the next corner, but it was getting too dark. We had to stop. The cave would remain hidden to this dilettante.

I later learned that Truckee’s “ice cave” has not had ice in it since 2014. Without ice, it was nothing more than a rubble pile—large boulders piled one upon another with narrow openings into chambers and crawl spaces underneath.

Rubble piles are fun to explore, but they don’t have the same intrigue as caves with dramatic ice or limestone formations. Nowhere in the Tahoe region could I find these types of caves, and I wondered why.

No Limestone in Tahoe

Scott Valentine, earth science faculty member at Lake Tahoe Community College, shed light on the mystery: “Caves in Tahoe are either piles of collapsed boulders or erosion pockets formed by wind and water.” 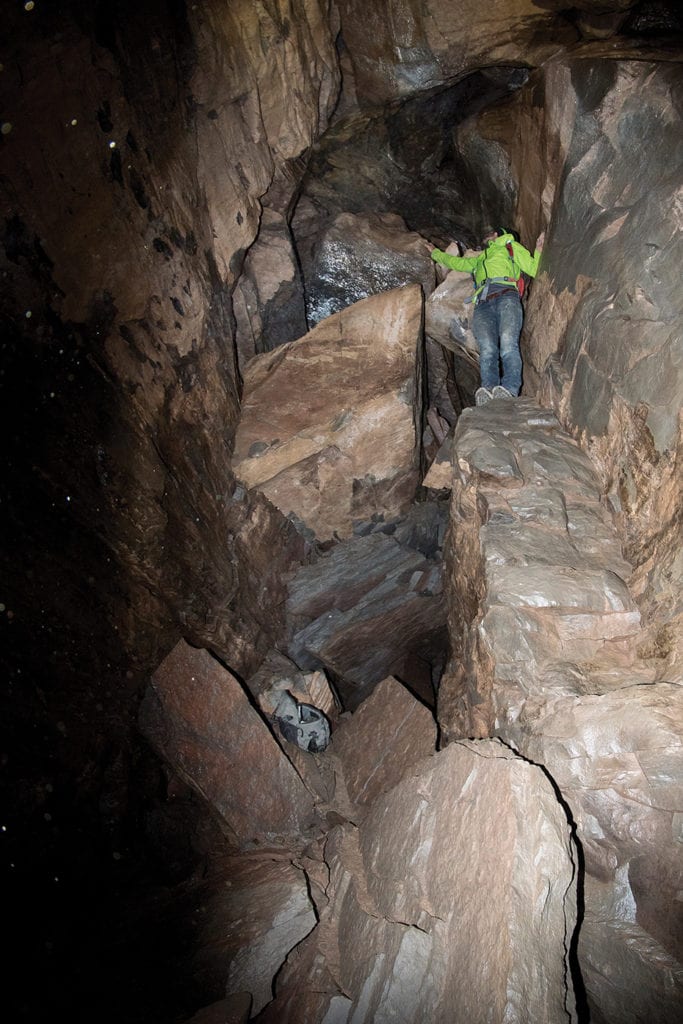 Inside the Truckee ice caves, photo by Peter Day

Valentine says Cave Rock formed when the water level of Lake Tahoe was higher. Over time, wind and waves eroded concaves into the granite, which later was tunneled through to accommodate motorists on Highway 50.

The rock in the Tahoe region is mostly granite because of something Dick Hilton, earth science instructor at Sierra College in Rocklin, calls “un-roofing of the batholith.” Millions of years ago, the younger, less-dense rock eroded away as the Sierra Nevada rose. Glaciers from the ice age stripped away limestone and other soft material, exposing the granite below.

The characteristics of caves change in the lower elevations of the Sierra foothills west of Tahoe as the rock changes from granite to limestone. Limestone caverns support the formation of calcite speleothems such as stalagmites and stalactites—icicle-like pinnacles of water-deposited limestone.

Limestone caves conceal interesting formations as they grow over thousands of years. It is easy to experience the beauty of a limestone cave within a reasonable driving distance from the Tahoe area. Hawver Cave, Black Chasm Cavern and Moaning Cavern are just a few of the underground wonders in the Sierra foothills.

Hawver Cave is located in Auburn State Recreational Area on Highway 49 and is nestled in a limestone mountain overlooking the Middle Fork of the American River.

Rumors about this cave’s mysteries began circulating in 1906 when J.C. Hawver, an Auburn paleontologist, found a cache of ancient bones. The fossils included giant dire wolf, saber-toothed cat, ground sloth, mammoth, bison and the skull of 10,000-year-old Homo sapiens. Some of the samples are on display at the Natural History Museum at Sierra College in Rocklin. Other prehistoric fossils remain inside the cave, says Gene Lorance, foremost expert of Hawver Cave. 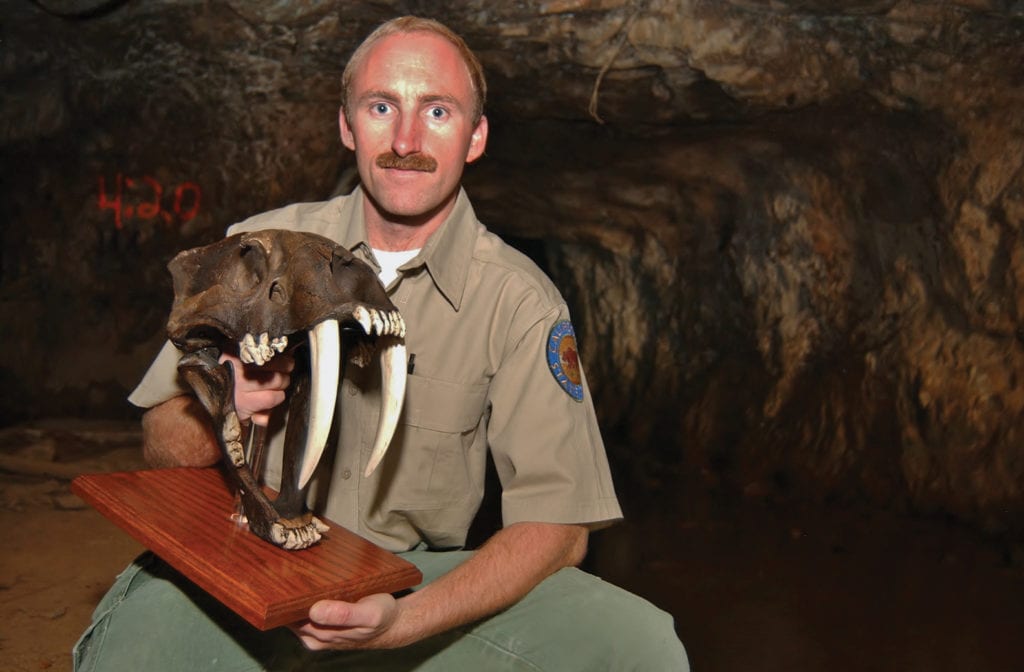 Lorance spent 11 years with the California State Parks in Auburn as the Environmental Resource Specialist and manager of Hawver Cave. He facilitated programs about the cave at Auburn Library.

“I had no problem making an announcement to the public and getting 300 or 400 people to see a slideshow presentation,” Lorance says.

He also spearheaded an effort to open the cave to the public. “It was almost a turnkey operation,” Lorance says, “but the owners did not want to open it.” Visitors are not allowed inside. The three large entrances to the cave are gated or blocked.

However, the secrets of Hawver Cave continue to draw public attention for historical and scientific reasons. In the early twentieth century, the cave was used as a limestone quarry. The ruins of Mountain Quarries Railroad, as well as parts of the original limestone processing structures, are still there. More important are the areas of scientific interest. “We can actually see fragments of fault lines,” says Lorance, “and there is a hard-to-find chamber with calcite formations.” 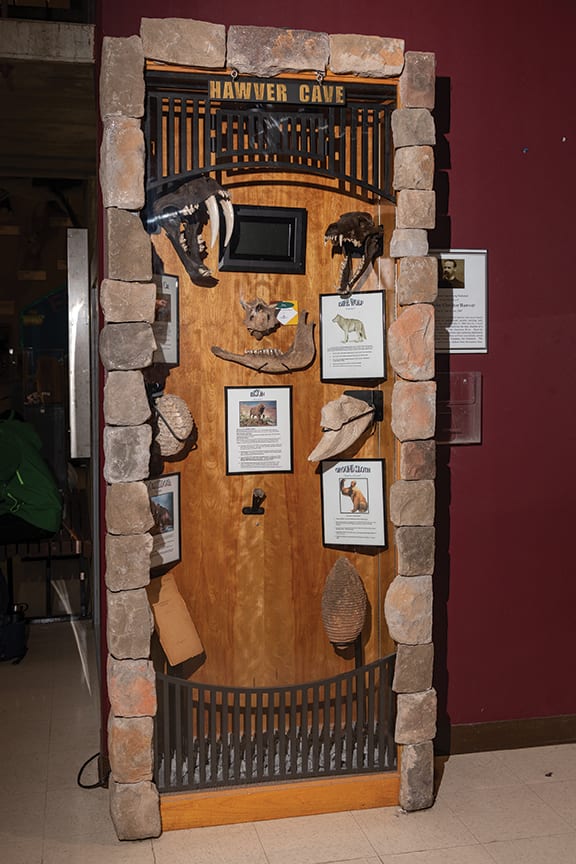 Secret openings into the cave continue to attract spelunkers. A YouTube video from 2017 shows three young explorers paddling a dilapidated boat across an underground lake. Brief glimpses of a waterfall and ruins from the cave’s mining days are also shown. Not surprisingly, the spelunkers do not reveal how they got inside.

The cave remains closed and its mysteries hidden from the public. However, determined spelunkers and vandals continue to enter the cave. Museum displays of the fossils keep the rumors of Hawver Cave alive and prevent it from fading from public interest. The cave’s value is of enough historical and scientific significance that it remains a topic of conversation and research. 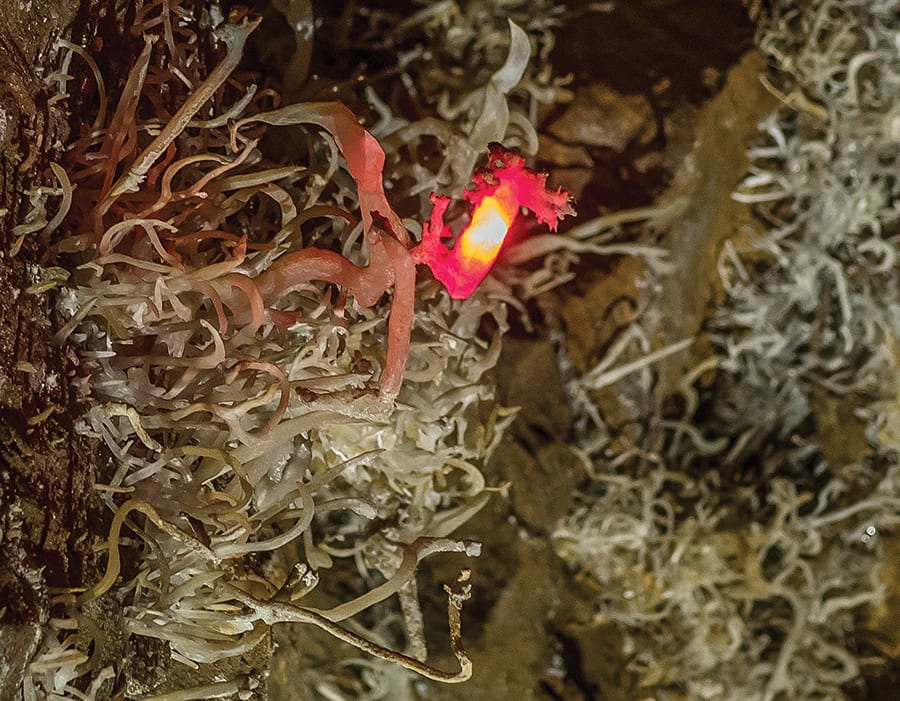 Black Chasm Cavern is famous for its helictite formations. This one, illuminated by a laser pointer, looks like a dragon and is the mascot of the cave, photo by Martin Gollery

Located near the historic Gold Rush town of Volcano off of Highway 88, Black Chasm Cavern fell from public interest after it was first documented in 1854. Only a handful of speleologists knew about the exotic formations and sparkling crystals, described in the 1881 book History of Amador County, as jutting “from the walls in every conceivable direction, turning and bending into many shapes.”

Spelunkers who entered the cave in 1954 traversed the 160-foot pit inside and discovered a chamber filled with a display of translucent helictites, the same speleothems described in the book.

Today, the chamber is known as the Landmark Room. Only five percent of all caves known on earth contain helictites—twig-like formations that branch, curve or spiral. These unusual formations occur in abundance in most chambers of Black Chasm.

A large part of the cave is closed for the sake of preserving the delicate formations. There are only a few areas open to tourists. Visitors can go on walking tours into the Landmark Room, where tour guides point out helictites shaped like candy canes, butterflies and reindeer. The cave’s most famous helictite is also the cave’s mascot. It is the shape of a dragon.

Caves concealing exotic speleothems attract visitors from far and wide. Other features such as spooky moaning noises and legends of vicious rock monsters draw the attention of both casual tourists and serious spelunkers. 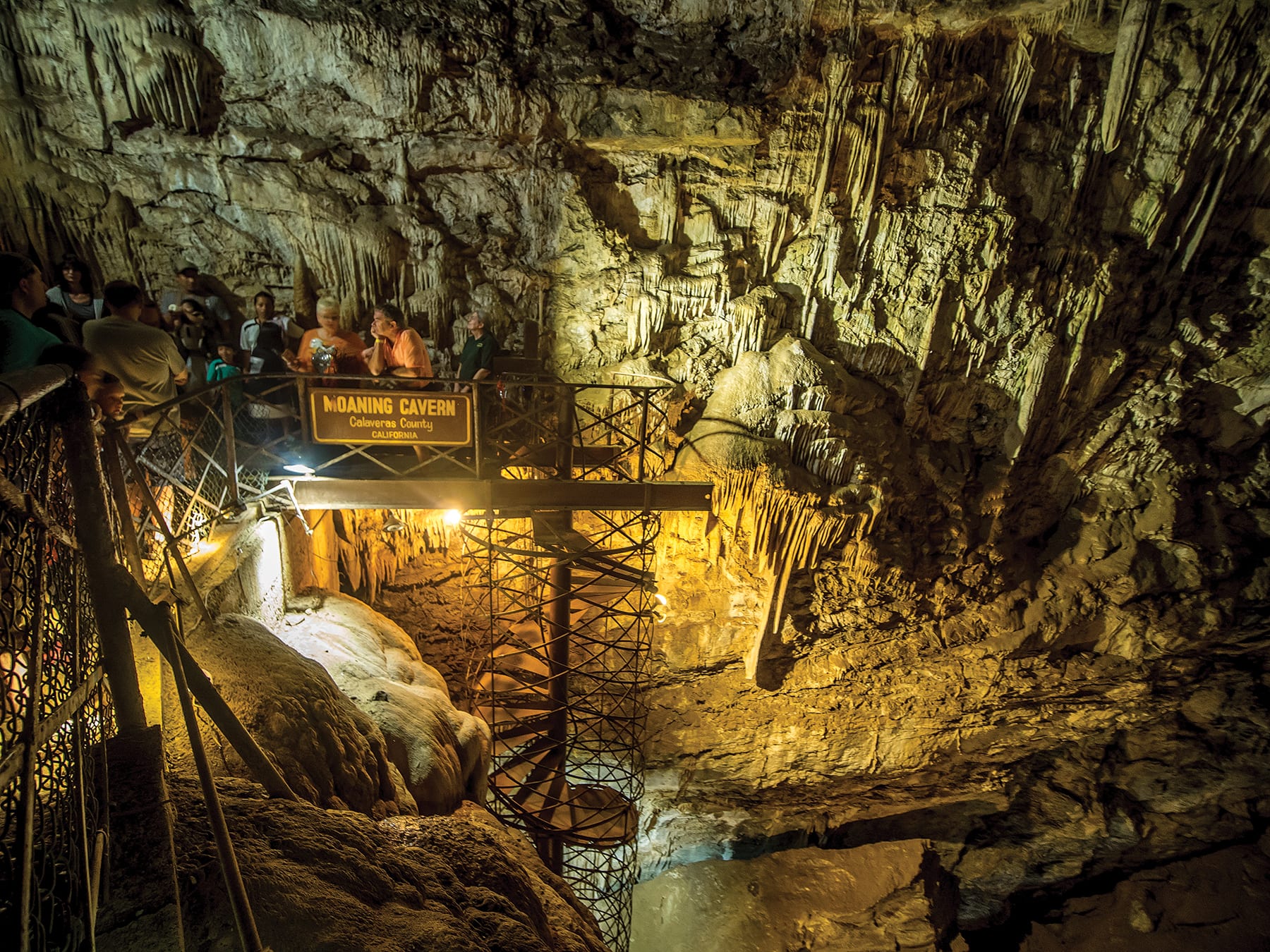 Tourists observe Moaning Cavern from the platform at the top of the towering spiral staircase, photo by Martin Gollery

Moaning Cavern harbors these secrets and more. Located in Vallecito off Highway 4, Moaning Cavern has produced an echoing sound off and on for thousands of years. The Miwok, who lived nearby, heard the moaning and created a legend to explain it. They believed a giant stone monster named Yayali lived inside and lured people to their deaths.

Truth was mingled with the legend. Anthropologists uncovered fragmented human bones covered by layers of dripstone. The bones were shattered and dispersed, suggesting that the people inside were not there by choice. The entrance to Moaning Cavern is an opening into a vertical drop of over 165 feet. Anthropologists theorize that people might have fallen inside unintentionally. The combination of the moaning sound and people never returning could explain why the legend of Yayali entered Miwok folklore.

The moaning sound was partially the result of water dripping from the draperies into the water-filled holes beneath. The sound of dripping bounced off the walls of the main chamber and by the time it escaped the entrance, people heard moaning. Today the cave moans on rainy days when conditions are right. Its former voice is not completely restored because the staircase interferes with the acoustics.

Moaning Cavern is easy to explore. Walking tours descend the long spiral staircase. Lights reveal colors and glisten off calcite formations. The dripping water is a reminder that the cave still moans. Adventure tours give explorers a chance to see remote rooms. 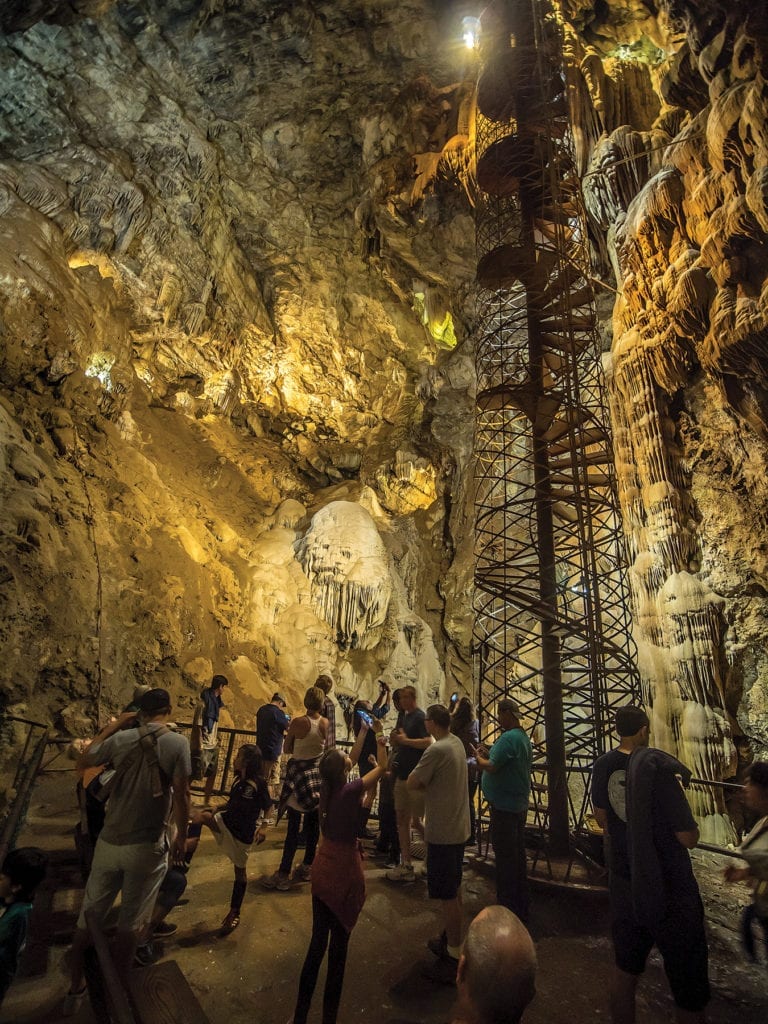 Looking up from the bottom of the spiral staircase in Moaning Cavern, photo by Martin Gollery

Some caves draw interest because of their remarkable displays of geologic activity. One example is Subway Cave in the Lassen National Forest north of Tahoe.

The cave is a lava tube. The ceiling varies in height at around 6 feet. The 0.6-mile hike through the tube leads to chambers with apocalyptic names such as Lucifer’s Cul-de-sac, Devil’s Doorway and Rattlesnake Collapse.

The tube formed during volcanic eruptions when lava flowed like fiery rivers. The liquid magma cooled when exposed to air and this outer layer formed a rock cap. The molten lava beneath the cap continued to flow and eventually drained, leaving a hollow tube, or tunnel, in its wake.

According to Valentine, calcite speleothems do not occur in lava tubes due to a lack of ground water high enough in calcium to form stalagmites and stalactites.

However, the cave does house an interesting formation called lavacicles, which are basalt features formed when the level of the hot lava river dropped, and the molten lava attached to the ceiling dripped. The drips were exposed to air and cooled. They look like frozen-in-time water droplets but are hard as rock. 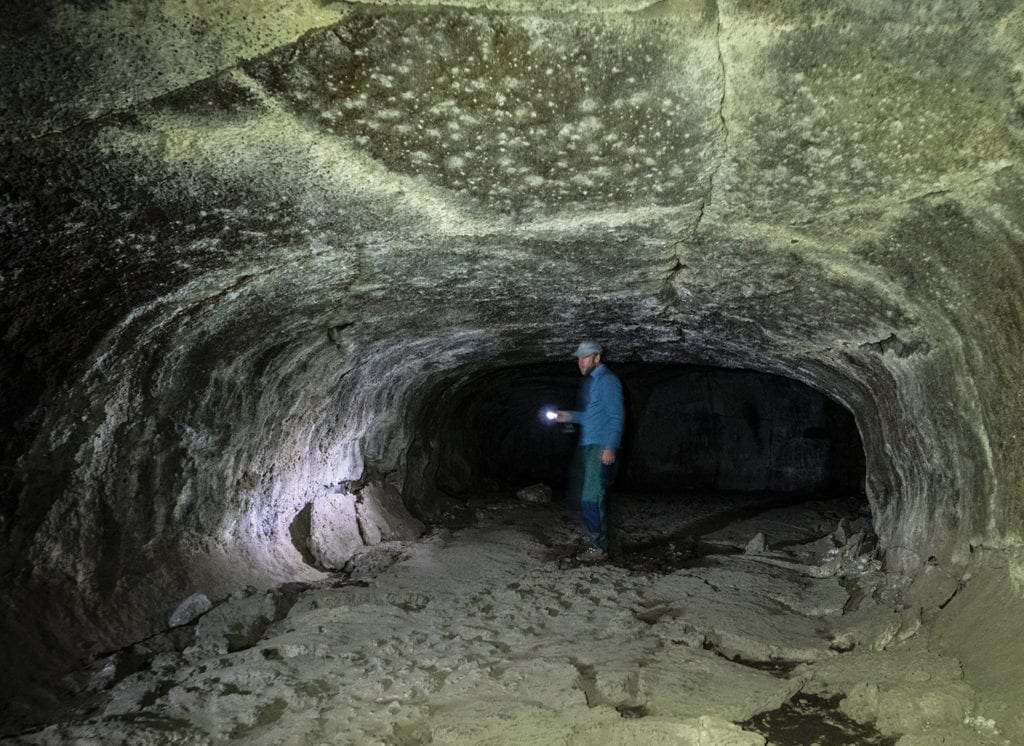 Whether it’s a lava tube, a rubble pile, an erosion pocket or a limestone cavern, the region’s underground mysteries continue to captivate the imagination and attract legions of spelunkers.

While the Tahoe area itself holds no world-class caverns, the variety and history of the caves spread throughout the broader region serve up plenty of opportunities for exploration and intrigue.

And it’s nice to know that hidden caves still exist, only giving up their secrets to the most dogged and determined explorers, while sparking the imagination of those who never find the way to their hidden tunnels.

Deanna Kerr is an avid outdoor adventurer who is intrigued by the mysteries of caves.

The following is a list of other caverns of interest within relatively close proximity to Lake Tahoe: