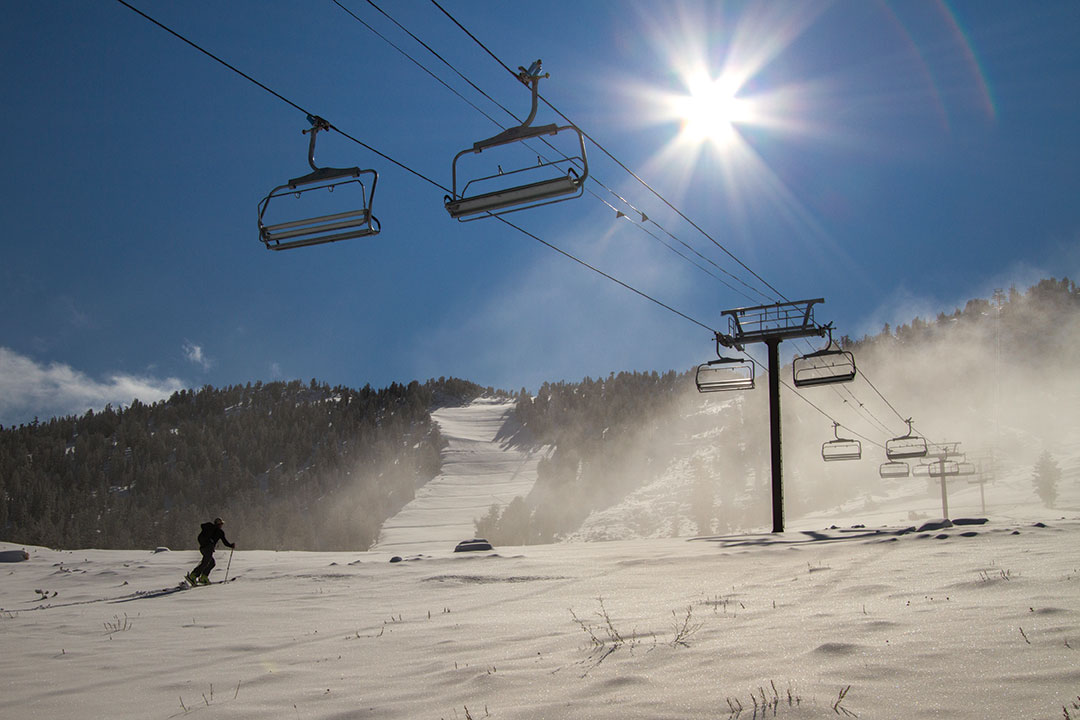 Anyone who’s ridden much at Sugar Bowl Resort has seen them. People shuffling upslope on skis or splitboards, against traffic, defiant in the face of chairlifts and gravity.

The phenomenon has gone on for years, decades even. Nobody paid a whole lot of attention.

“It was always sort of an unwritten rule,” says John Monson, director of marketing at Sugar Bowl. “But it used to be that back in the day, people doing it were pretty knowledgeable and for the most part everyone out there knew what they were doing. But now with AT [alpine touring] gear flying off the shelf, we were seeing a ton of people show up and basically have at it. So we needed to get some regs in place.”

That’s where Sugar Bowl is blazing a path among Tahoe-area ski resorts.

Starting last season at the historic ski area, those with a penchant for skinning within resort boundaries could officially do so. Uphill passes are free for season passholders (and a cost for non-passholders), so long as they review and sign the resort’s Uphill Use Policy and wear an assigned armband that can be seen by resort employees from a distance.

The policy states that Sugar Bowl, which is located on both private and public U.S. Forest Service land, reserves the right to deny uphill access at any time at the discretion of resort management. Rules include maintaining a distance of at least 100 yards from grooming machines, winch cats, winch cables and snowmaking equipment. Uphill travel is prohibited during storms and while avalanche bombing is underway.

Diamond Peak Ski Resort in Incline Village plans to follow suit with its own uphill-use policy for the 2014–15 season. No other major resort in the region allows uphill travel within its boundaries.

“I’m glad they [Sugar Bowl] took a leadership position to make it official,” says Craig Dostie, a longtime Truckee resident and publisher of backcountry skiing website earnyourturns.com. “There were a lot of people pushing for it, and I think in some ways the community wanted them to stand up and say it’s okay. Sugar Bowl always had a more liberal policy than anyone else.”

Danny Huberman, general manager at the Truckee Sports Hub, says the uphill trend is here to stay. He saw an explosion in the popularity of alpine touring with the release of the versatile Marker Duke bindings in the mid-2000s, and sales remain strong.

“That kind of changed the game because you had that binding that you could ski inbounds or out of bounds,” Huberman says. “So we were selling Dukes to people, and they’d come back maybe two years later and say, ‘I think I’m going to buy a pair of skins,’ and those customers have really become a lot of that uphill travel.”

But why would a skier or snowboarder with a backcountry setup, which would allow them almost unlimited access to Tahoe’s world-class terrain, choose to skin up a resort in the first place?

“Well, sometimes I don’t have time for the backcountry experience. But as a backcountry skier, I still want the workout,” says Dostie. “It’s one of the best workouts you can get. So inbounds skinning is about convenience and training; it’s not so much about the backcountry experience except for the uphill skinning part. There’s a convenient place to park, and I just want to get a workout and cruise back down and get back to whatever I’m doing. It’s something you can do on your lunch break or before work or after work. It’s a backcountry skier’s equivalent of a climbing gym.”

A handful of resorts in Colorado already have uphill policies in place; some even have dedicated lanes for uphill traffic, says Monson.

Yet Tahoe resorts, aside from Sugar Bowl and Diamond Peak, remain reluctant to develop official uphill policies. They simply do not allow it. Kevin Cooper, public relations manager at Kirkwood Mountain Resort, which is owned by Vail Resorts, cites safety concerns.

“Really, what it comes down to is that people have to be educated,” Cooper says. “You have a lot of people who are excited to get up there and on the mountain, and what they’re not looking at are things like how much snow fell, how big are the rocks up there, and things like that. People go out there and can get hurt. There’s no patrol on the mountain yet, and then you’ve got to figure out how to get them out.”

He adds, “It’s tough because, while some people get it, a lot of people just don’t have the common sense. I hate to say it, but it’s kind of the brutal truth of it.”

Dostie agrees, and adds that the hassle to educate the novice backcountry crowd is in most cases not worth the resorts’ efforts.

“What should be common-sense rules now have to be written rules. Realistically, that’s probably the biggest reason why resorts do not want to do it,” he says. “It’s not so much liability. It’s that it requires them to make some kind of extra effort to control people. So I don’t know how many other resorts are going to join the bandwagon on that, because it’s an additional cost without necessarily any additional revenue.”

Sugar Bowl’s first season issuing uphill passes went smoothly, Monson says, adding that most uphill travelers hit the mountain in the early morning hours, ski down and are out before the first lift opens. With a policy in place and backcountry gear remaining a hot commodity, he thinks more people will take advantage of the opportunity in the future.

“I think we should probably see an increase. For the most part, the feedback from both our season passholders and people who are paying [for uphill passes] is pretty positive,” he says. “With that in mind, we’re going to learn as we go, and if we have to tweak, we’ll do so.”