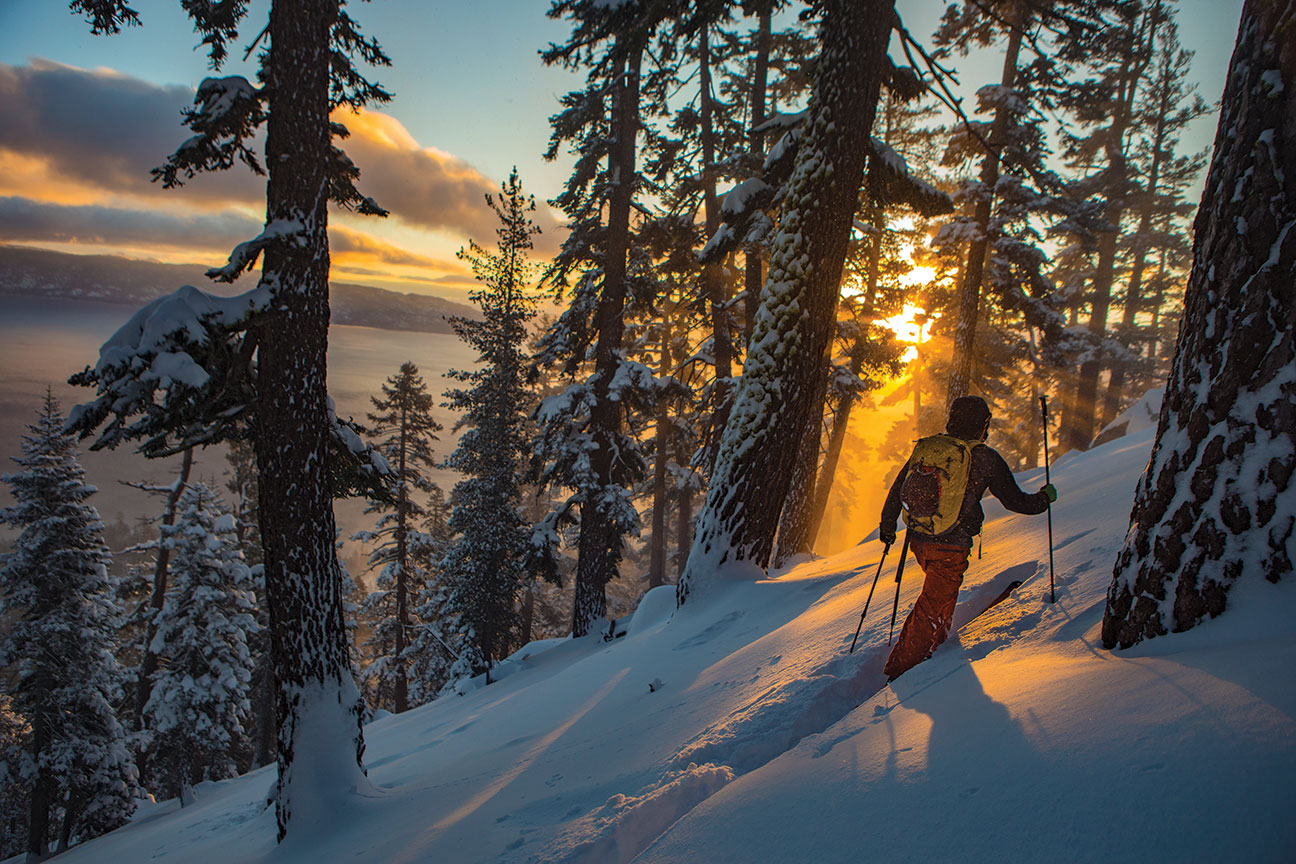 After a summer of packed trailheads, the Tahoe Backcountry Alliance is preparing for a busy—and potentially dangerous—winter

If you’re going to start backcountry skiing in Tahoe this winter, there are a few things you should know before setting off on the skin track.

First, gear. A backcountry setup is not simply skis, boots, poles and skins. It also includes a beacon, probe and shovel, plus the knowledge—and practice—to use those tools effectively.

You’ll need to learn how to read an avalanche report from Sierra Avalanche Center, how to dig a snow pit, how to analyze the layers in the snowpack to make an informed decision about where to ski and when to ski it. You’ll probably want to take an Avy 1 course, which is basically an introductory class taught by snow science professionals about avalanches.

Getting the gear and learning about avalanche safety are some of the basics to being prepared for the backcountry. But there’s a third element that’s just as important, and that’s taking care of the land where you’ll be skiing.

Public lands in Tahoe aren’t threatened by some of the usual foes like oil and gas drilling, mining or timber. Instead, Tahoe’s public lands are threatened because they might be loved too much.

Last winter, as soon as the ski resorts closed, skiers and snowboarders flocked to the backcountry. The pace of visitation kept up through the year. After a summer of crowded trailheads, overflowing trashcans, traffic jams and illegal parking on the side of the road, many in Tahoe are bracing themselves for more of the same this winter.

Greg Garrison, executive director of the Tahoe Backcountry Alliance, has been talking to shops about the types of customers who are buying backcountry equipment. All signs point to a new type of skier. As soon as people are denied access to a resort—because it closed, or there’s a jam with the reservation system—Garrison thinks they’re going to turn to the backcountry, which was already growing in popularity. “It’s like a perfect storm,” Garrison says.

Anticipating an influx of people in the backcountry this winter, the Tahoe Backcountry Alliance is amplifying a message of stewardship and backcountry etiquette.

“Be respectful. Be courteous going uphill,” says Geoff Quine, board president of the Tahoe Backcountry Alliance. These are some of the key points to a new etiquette message that Quine and the alliance were in the midst of developing in October.

“Parking, too. Think before you park,” Quine says. “Should you park parallel, should you park perpendicular? Don’t park on private property. Don’t punch it into zones that haven’t been plowed yet. Know the local regulations and avoid irking local residents.” 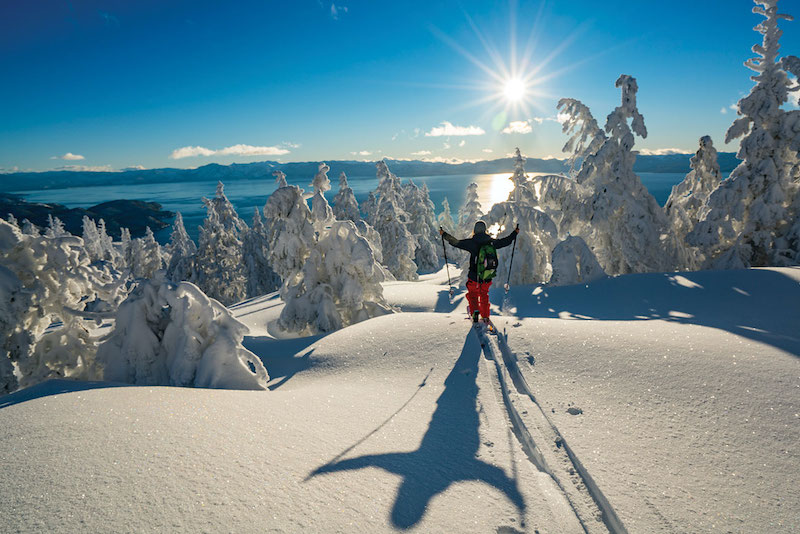 Tahoe has a constellation of nonprofits and groups that serve the winter backcountry community, and the Tahoe Backcountry Alliance works hand-in-hand with all of them. Dave Reichel, one of the founders of the alliance, is now the executive director of the Sierra Avalanche Center. Members of the alliance cross over with Tahoe Nordic Search & Rescue. The group also partners with land trusts, who have been leading the way for land protection in the Truckee-Tahoe region for decades.

But the Tahoe Backcountry Alliance stands apart for their advocacy work. They represent Tahoe backcountry skiers and snowboarders, specifically, at meetings with the Forest Service, Caltrans and the Tahoe Regional Planning Agency (TRPA).

“We learned early on that we shouldn’t take backcountry skiing for granted,” says Quine.

Parking in Emerald Bay was the issue that put the nonprofit on the map when it was founded in 2015. The TRPA has led an extensive effort to reimagine the Highway 89 corridor, with a focus on Emerald Bay. Early in the process, the parking at Jake’s Peak, one of the most popular backcountry spots in the Basin, was nearly eliminated. The alliance stepped in and spoke up, advocating to the agency to save the few parking spots on the West Shore and keep those areas plowed.

“It’s all about, ‘How do we provide consistent and legal access to Tahoe’s public lands?’” Garrison says. “Desolation Wilderness is out our back door and yet there is available parking to access Desolation in the winter for maybe 25 cars.”

The alliance also helped solve a challenge that’s put backcountry skiers at odds with homeowners for years—parking at the west end of Donner Lake. Cars were parked illegally on the roads in the neighborhood, while skiers set off for the “Lake Run.” The alliance met with the Donner Lake homeowners’ association, the Town of Truckee and the Truckee Donner Land Trust, and an agreement was made to lease the parking lot on the west end of the lake so it could stay open during the winter.

Parking and homeowner relations might sound tedious, but they add up, especially as more and more people gravitate toward the backcountry and public lands. Advocacy groups for winter recreation exist across the country. In places like Utah, concentrated use of a small region like the Wasatch Range has created longstanding issues like traffic and parking that have become increasingly difficult to solve.

“We have to try to get ahead of the curve,” Garrison says. “These COVID times are a great example. We saw at the end of last season how trailheads are just going to get crushed with users.”

But a lot of people heading to the backcountry isn’t necessarily a negative. Garrison says it can be a positive, as long as those new users get the avalanche education, have safe, legal access to the trailhead, and are prepared to be self-reliant and responsible when they’re far away from help.

“Personally, I feel like access to public lands is vital for a healthy community,” Garrison says. “The best way to bring an appreciation in someone’s life about public lands and wild spaces is to have them enjoy it.”

The nonprofit has been mostly volunteer-run, but they recently hired Garrison as an executive director on a part-time basis. They’ve also had a few board members join who have more nonprofit experience to help them grow.

This winter, the group hopes to install trailhead counters to monitor the actual number of people who are skiing the backcountry, a number that’s surprisingly difficult to pin down because the Forest Service lumps backcountry skiers in with Nordic skiers.

But the group has figured out a way to answer tough questions before, and they’re hoping to continue to build on their momentum.

“I just hope that people see us as an avenue for questions or bringing problems to,” Garrison says. “If they see a trailhead that’s being underserved, we’re the group that you can come to and talk to and meet with, and we can approach the agencies with you. We can help give you a louder voice than what you may have as just a single citizen. That’s where I’m hoping this momentum that we’re building is going to carry.”

Julie Brown is a freelance writer and journalist. She grew up in Lake Tahoe and currently lives in Reno.