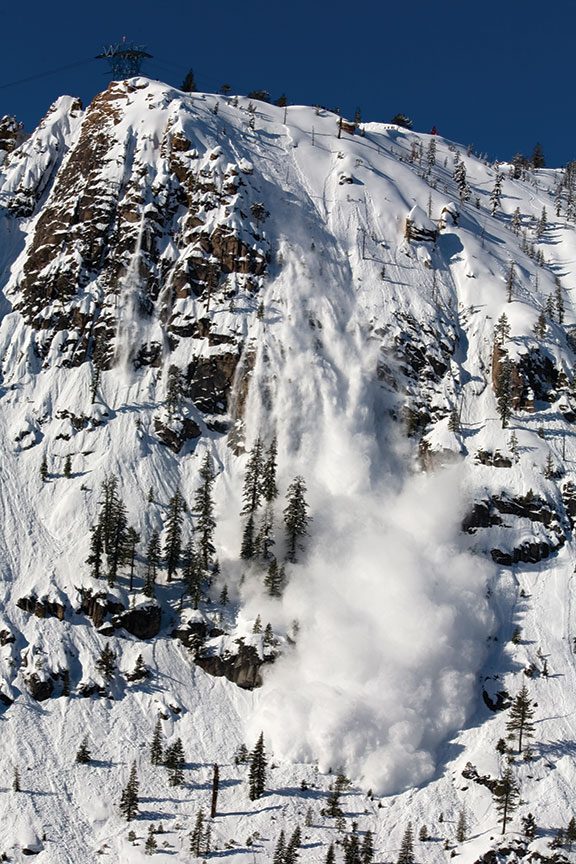 An avalanche rips down Tram Face at Squaw Valley, photo by Ryan Salm

The black SUV cruised around a corner high above Emerald Bay. The March sky was clear and the sun baked the mountain snow. The driver, Karrie Kunich, a Markleeville resident, thought about the garden she’d plant when the seasons changed.

Not far past the Eagle Falls trailhead off Highway 89, Kunich noticed some light snow fall from the mountainside. Suddenly, a wall of white covered her windshield. Thick, heavy snow buried the car, imploding the windows and packing in around a terrified Kunich.

Luckily for Kunich, a driver witnessed the avalanche and pulled her from the vehicle. She had been buried up to her chest. A 14-foot wave of Sierra cement totaled her Chevrolet Tahoe. A tow truck could barely move the snow-filled vehicle.

Experiences like Kunich’s underscore the responsibility of those who monitor avalanche risk. While the hearty thumps of bombs after a big winter storm are a welcome sound for Lake Tahoe’s skiers and snowboarders, those who throw the charges and make the calls to close roads or runs must operate with rigorous precision. The undertaking is dangerous and mistakes can cost lives. 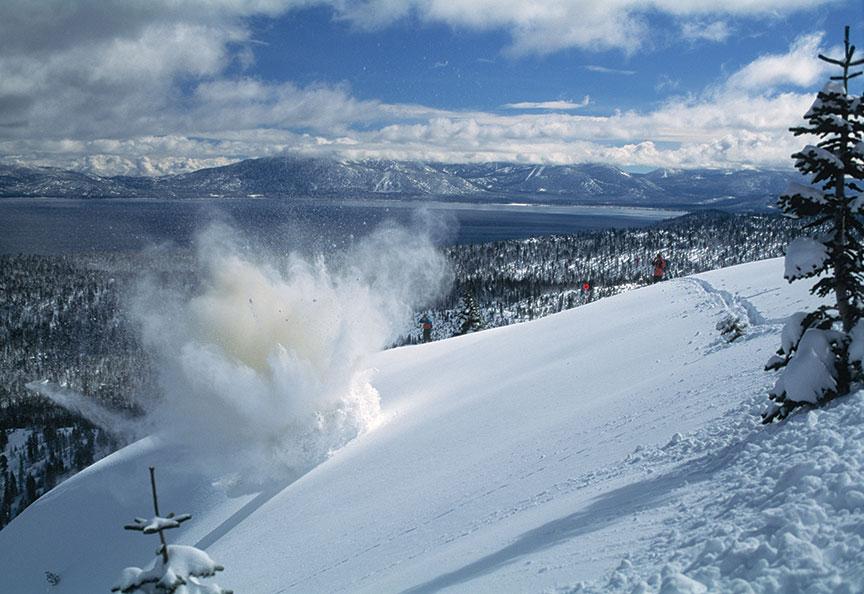 Avalanche control at the top of Quail Face at Homewood, photo by
Garry Moore/Kiwi Kamera

Anatomy of an Avalanche

Avalanches occur in a variety of ways, but the equation is always the same. Experts say avalanches are a combination of four major factors. Slide conditions exist when there is a steep slope, almost always over 35 degrees; a running surface allowing the snow to slide; a weak layer, which breaks; and what ski patrol call “the unknown,” the mystery straw on the camel’s back that acts as a trigger.

In Lake Tahoe, those factors frequently combine. The Basin has many slopes with a steepness over 35 degrees. Some are positioned over roads. Others may be your favorite black diamond at one of the area’s 14 ski resorts. As snow piles up throughout winter and temperatures rise and fall, layers form. Icy or dense layers caused by rain and freezing nights can act as the running surface. Re-crystalized snow from extensive periods of extreme cold can act as a weak layer, hiding beneath the pack, just waiting to fracture.

Slides on the Palisades at Squaw Valley, taken from Siberia chairlift in April 2015, photo by Garry Moore/Kiwi Kamera

The Basics of Control

Every mountain town or resort has reason to control avalanches. Powerful slides can crush infrastructure and bury whole communities. In the past, avalanches have inundated entire ski resorts, shut down roads and railways, and buried countless mountain travelers. Since 2005, over 350 people have died in U.S. avalanches.

Various methods of control are used to rein in the destructive power of slides. Stationary snow roofs, snow nets and snow redistribution structures are all passive methods that help decrease the risk of slides. Though hardly noticeable, Lake Tahoe agencies employ all of these in different areas. A more aggressive approach—and the most effective and common method of avalanche control—is to start many small avalanches in order to avoid large, unpredictable slides. That’s where those powder day booms come in.

In Lake Tahoe, explosives and high-powered guns are used to test for and start avalanches above roads and ski runs. The impact of the explosions acts as the fourth “unknown,” or trigger element. The charges often have about the same impact as a skier if he or she dropped onto the slope. Without this control, avalanches in the Lake Tahoe area could take out highways, steamroll chairlifts and bury anyone in their path.

“Without avalanche control, things would be very different,” says David Reichel, who teaches avalanche education classes at South Shore’s Lake Tahoe Community College. “Highway 50 would have to close any time we got new snow. At the ski resorts, you’d have people setting off slides or you’d have slopes that just had to be closed.” 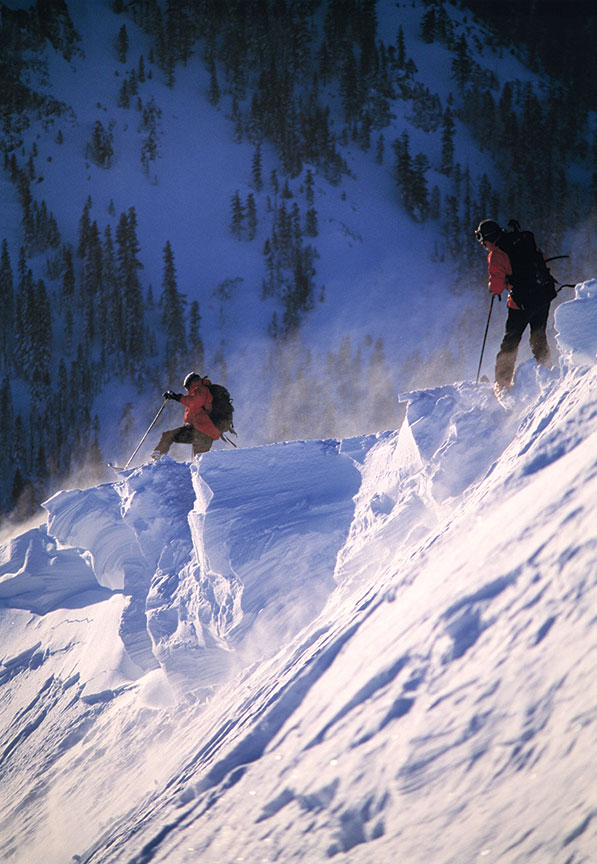 Lead patroller at Sierra-at-Tahoe Mark McAllister has been a ski patrol member for over 35 years at three different mountains. He’s well versed in avalanche control. He’s thrown charges on countless powder days. He’s been swept away by avalanches and dug out injured friends. He’s closed runs and recovered bodies.

“You’ve got to use your sixth sense a lot,” McAllister says. “You’re out there before everyone else. You have to be very cautious. If you get too complacent, that’s when you make mistakes.”

For ski patrollers, avalanche control is an integral part of the job. But handling explosives and slicing down powdery, untested slopes is consistently dangerous. According to the American Avalanche Association, more ski patrollers than members of any other occupation have been killed by avalanches, with 24 recorded deaths in the U.S. alone since the 1940s. Five of those occurred at Lake Tahoe area ski resorts.

During big storms, patrollers must keep a constant eye on conditions to ensure the safety of the skiing and riding public and the infrastructure supporting them.

Typically, ski patrol begins monitoring avalanche conditions after six inches of new snow and sometimes less, depending on wind and weather. Some of the larger resorts, like Squaw Valley, have full-time avalanche forecasters who help decide if bombing is necessary. If the call is made, patrollers typically throw two-pound charges packed with a TNT-like compound into prone zones. When the explosives detonate, they send a clear signal.

“If you throw a couple charges and all you’re getting is bit holes, then you’re skiing,” says McAllister.

But don’t get him wrong. The decision to open avalanche terrain is not made lightly.

“We don’t want what’s known as ‘post-control release,’” McAllister says. “That means you’ve already done your avalanche work, opened the terrain and the public goes and gets buried. That’s a big no-no.”

Bill Netto has started avalanches since 1982 as the supervisor for South Lake Tahoe’s Caltrans maintenance yard. Netto saw a 20-foot wall of snow careen down a mountainside and land on U.S. Highway 50. Luckily, the roadway was closed and the slide was the result of Caltrans’ control work. It took road workers more than four hours to clean up.

Caltrans uses a system of propane canons mounted on hillsides above Lake Tahoe highways to clear avalanche danger. The canons, which emit a roar of flame and a powerful sonic blast that can crack loose avalanches, are fired remotely using a computer. In some areas, workers throw hand charges. In others, like above Emerald Bay, Caltrans must make the call to close the road.

“It’s all about safety,” Netto says. “It’s really important that we make the right call, otherwise we could put somebody’s life in jeopardy.”

The avalanche that buried Kunich and her car was an extremely rare occurrence that’s difficult to forecast, Netto says. 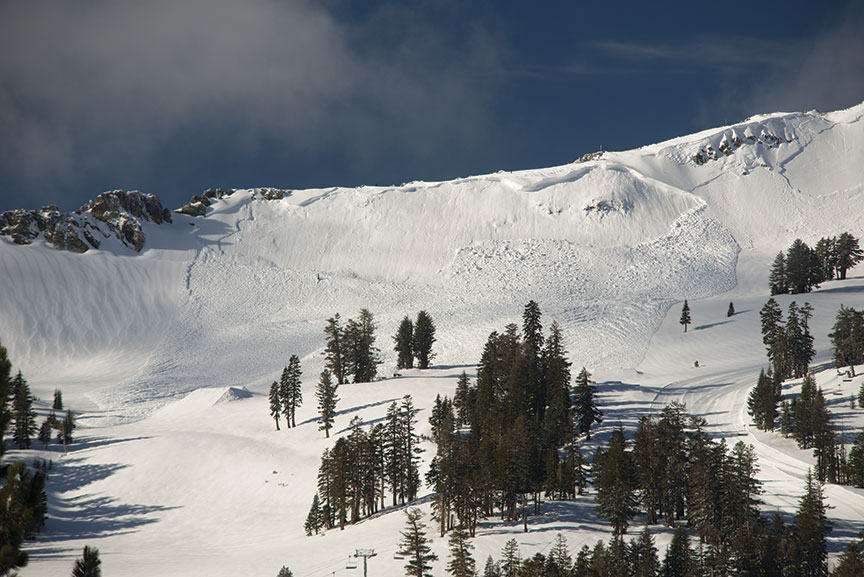 Avalanche control has changed significantly in recent decades. The technology has become more advanced and the techniques have evolved. For Netto’s crew, the operations above South Lake Tahoe’s U.S. Highway 50 have gotten a lot smoother.

“Back in the ’80s, it would probably take us four hours to do a mission,” he says. “Now it usually takes us about an hour.”

On the slopes, control methods have undergone fundamental changes.

“When I started, we used to try to throw the charges as deep into the snowpack as we could,” McAllister says. “Now, we try to keep them closer to the surface because you get much more of a shock.”

Snow science has come a long way, too. Ski patrollers know more than ever about the surface of the slopes. Digging pits and analyzing the pack is now second nature for many skiers and snowboarders.

These changes have helped ski patrollers and road workers become more confident in their avalanche control work. But there will always be that ‘unknown’ that unleashes the white wave at precisely the wrong moment.

“You’ve just got to stay on top of it at all times,” says McAllister.

Dylan Silver is a South Lake Tahoe–based writer and photographer. Find more of his work here.