Eye to Eye with Coalition Snow

You know those really good ideas? The wake-you-up-in-the-middle-of-the-night kind? The notions that make you want to start keeping a dream journal? The million-dollar missives that fade away sometime between first light and that second sip of Starbucks?

Tahoe-based entrepreneurs Jen Gurecki and Danielle Rees woke up, got up and wrote it up. They made time—juggling family and full-time careers with business plans and balance sheets. During the last 18 months, the pair baked up from scratch a company manufacturing skis and snowboards made for women, by women—an industry first. Coalition Snow in 2015 raised enough capital from a Kickstarter campaign for its first full line of gear and apparel. They’ve got a quiver of up-and-coming locally sourced skiers and riders and the buzz behind gear designed and engineered by and for the fairer gender is growing.

CEO Jen Gurecki resides in Truckee where she is “waiting for the snow to fall” this season. She is pursuing a PhD in sustainability and “when not tackling the ‘shrink it and pink it’ problem in the ski industry,” Gurecki is working on climate adaptation and financial inclusions for women in East Africa with the organization Zawadisha.

CFO Danielle Rees moved to Lake Tahoe to teach snowboarding for “just one winter” in 1999. The Carnelian Bay resident blends her “passion for empowering women and girls with being active outdoors at my day jobs at Girls on the Run and Coalition Snow.”

Thirteen companies, most of them based in Europe, dominate the ski biz and they manufacture huge numbers of skis in China or Austria with R&D and design departments rivaling big auto manufacturers. But, they’re often seen as out of step with what’s happening on the mountain, especially when it comes to women. Is this over-simplifying or is this the problem you want Coalition to solve?

Jen Gurecki: This is definitely one aspect of it, but it extends beyond R&D. There need to be more women in executive positions in these companies. Without more opportunities for women to hold leadership positions in the industry, you have to wonder if their increased focus on women is another case of girl-washing or if they are truly committed to eliminating the insulting ‘shrink it and pink it’ mentality that permeates the industry.

Your company’s motto: ‘Putting an end to shrink it and pink it once and for all’ is part of the zeitgeist. Outside recently wrote an editorial entitled “No More Barbie Gear” saying, “giving us products with cutesy names and drenching ads in My Little Pony colors isn’t the way to inspire today’s women.” Is this a reflection of Coalition’s ethos?

Jen Gurecki: Absolutely. They nailed it with their critique of the gender stereotyping that happens across industries—it’s not just in skiing. We know that there are some women who may be drawn to this type of aesthetic design, but it’s not representative of all women. And that’s the problem—you can’t put us all in one box. Women are diverse and should have more options available to them.

Female athletes, if they’re going to garner mass appeal, still have to sell themselves as hard bodies and hair whips. What’s your company’s role in changing this?

Jen Gurecki: Women should have more of a say in how they are represented in the industry. There are going to be women who want to show off their hot bods, and it’s not for us to judge them or say that they shouldn’t. Other women are going to want to have their skill showcased. Our role is to support women in having a voice and making decisions that are best for them.

Danielle, you’ve been an integral part of growing Girls on the Run Sierras, which basically exposes girls to women who take themselves and their fitness seriously. They’re part coach/trainer, part mentor. Is this philosophy crossing over to Coalition?

Danielle Rees: Yes, Girls on the Run is about discovering girls’ authentic selves and celebrating their strengths. Our volunteer coaches serve as role models of collaborative leadership and instill confidence and competence in the girls while training for a 5K run. We named our ski company Coalition Snow because it builds on the strengths of a team of women. At Coalition Snow our goal is to design gear that will give women confidence to rip. I know it has for me.

The aforementioned Big 13 have (actual) rocket scientists engineering their skis. Some of the better independent manufacturers are spending more money on R&D than on the design of their top sheets these days. You’re a startup staking its claim on engineering skis specifically for women’s bodies. Jen, how much are you investing in this technology and who’s doing it for you?

Jen Gurecki: We aren’t making gear for women’s bodies, we’re making gear that women want. There’s a difference in that statement. The former opens itself up to all sorts of bulls*** pseudoscience, which is in part responsible for the copious amount of short and soft skis on the market. The latter is inclusive and responsive, and it’s filling a huge gap in the industry. We’re not investing all of our resources into technology; we’re investing in women by actively engaging with them to understand what it is that the advanced/expert skier/rider wants in her gear. We pair their feedback with what we know as women who’ve been skiing and riding for decades. It’s not rocket science. It’s authentic listening and action.

Regardless of your company’s size in the ski biz, one bad/off year and you’re stuck with a warehouse full of obsolete product, yet you’re still expected to come out with the newest and most innovative gear every fall. How are you going to try to sidestep the industry’s big supply-and-demand elephant?

Jen Gurecki: Our vision would be to move far, far away from the annual production schedule. It’s expensive for both the company and the consumer, and it’s not an environmentally sound practice, either. At the stage we’re in as a company, not producing a new line every season could be disastrous because at some level you have to play the game or else you’re not taken seriously. But, ideally, in the next few years we’ll have a strong enough brand and a strong enough following that we’ll be able to take those risks and we will be rewarded for being part of changing a broken system.

After a decade of getting fatter, wider and more rocker, the ski biz seems to be shrinking its product a bit, or maybe just not over-engineering it as much. Where does Coalition come down on its shapes and camber especially in the context of how it relates to women’s bodies?

Jen Gurecki: We’re just going to keep doing our best to make what the advanced/expert female skier and rider wants. As I mentioned earlier, it’s not about dissecting women’s bodies, it’s about listening to them and acknowledging that they are experts when it comes to what they want. We have introduced one new shape into next season’s lineup that responds to different tastes (and changing conditions) around width underfoot and rocker profile.

Danielle, who are some of the athletes and ambassadors you work with? 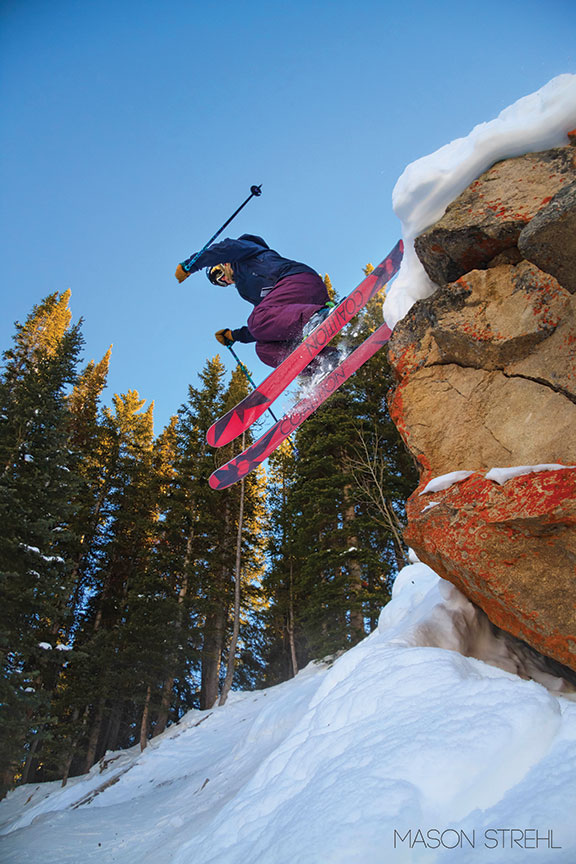 Danielle, getting to travel and ski with some of your athletes, ambassadors and customers may seem glamorous and a perk of the job, but it’s also work. Tell us about how you get inspired by seeing your product on the slopes.

Danielle Rees: This year I had the opportunity to go back to Chamonix where my husband Zach and I skied the winter before we got married. As a pre-wedding gift, he bought me the “women’s model” of his favorite big mountain ski. I could ignore the pink graphics but could not imagine the women’s 100 underfoot ski would be suitable for all conditions as it was just too soft. Going back to Cham with my Coalition Snow SOS skis was priceless. Trusting my skis to hold an edge in variable snow conditions gave me the confidence to embrace my fear of heights and push myself beyond my wildest dreams.

As full-time residents of the Tahoe Basin, you’re seeing first-hand what global climate change can bring. It’s not pretty. A lot of folks are stressing not only about the upcoming seasons, but their livelihoods and viability in the mountains in general. And, perhaps most importantly, what the future of making a home at elevation looks like. What are your thoughts about what winter and the ski biz look like as Mother Nature continues to revolt?

Jen Gurecki: We should actually all be talking about what we’re going to do to protect the environment. It’s a big deal, and part of the problem is the lack of accountability about how our actions are significantly impacting the environment and contributing to climate change. We don’t need to feel guilty about this, we should feel emboldened and empowered to challenge outdated business-as-usual practices. Not only do we need to do things differently—like maybe not produce every year, produce with environmentally friendly materials, offset our entire carbon footprint—we need to adapt and embrace change. We’re starting immediately with an amazing new line of unique soft goods that don’t require any snow to operate and a new freestyle ski that I have jokingly called our “climate change ski.” It kills it and is so much fun on the conditions we’ve experienced the last four years in Tahoe. Granted, the more it snows the more skis we sell, but we’re committed to finding other ways to live and love in these challenging times. We want to celebrate our vibrant mountain communities that have so much more to offer than just powder days. It’s going to take some creative thinking and business acumen, but we know that we’re not in this alone.

Your spring Kickstarter fundraising campaign was a big success. Tell us about that and about how to find your fall lineup and follow you as we get ready for the snow to fly.

Danielle Rees: We exceeded our Kickstarter goal, raising $31,000 in 31 days, which allowed us to expand our second line of skis and boards. We wanted to give women more choices so we added a longer and shorter length for our all-mountain SOS and powder Abyss ski (adding a 166 and 180 to the 173 cm length). We also added length (155 cm) to our 147 and 151 Myth all-mountain snowboards. [The campaign] helped us meet future demand, support our ambassadors and team riders, and allows us to innovate around sustainable manufacturing.

Does that means new skis/boards for the upcoming season?

Danielle Rees: We added the Bliss freestyle ski, which was a favorite among our gear testers. It’s perfect for someone looking for a narrower ski—it has an 87 mm waist compared to the 105 mm SOS and 114 mm Abyss. A birch core gives this ski the stiffness and stability to stomp that landing and a true twin design means you’ll be just as comfortable dropping in switch. We’re offering this in three lengths: 168, 175 and 182. Based on feedback from women riders, we added a new rocker board to our lineup. The Queen Bee is a true twin tip with traditional camber, which means it handles no matter which direction you send it. A bit of rocker in the tip and tail keeps you afloat when you need it. With a 288 mm waist, this whip stick can surf those bottomless powder days but doesn’t lose power when it transitions to crud and hard park. A full birch core makes this board a stiff yet playful ride. This board comes in a 147, 151 and 155 length.

Andrew Pridgen is a San Luis Obispo–based author and editor who is planning to introduce his toddler son to Tahoe’s slopes this winter. Find more of his work here