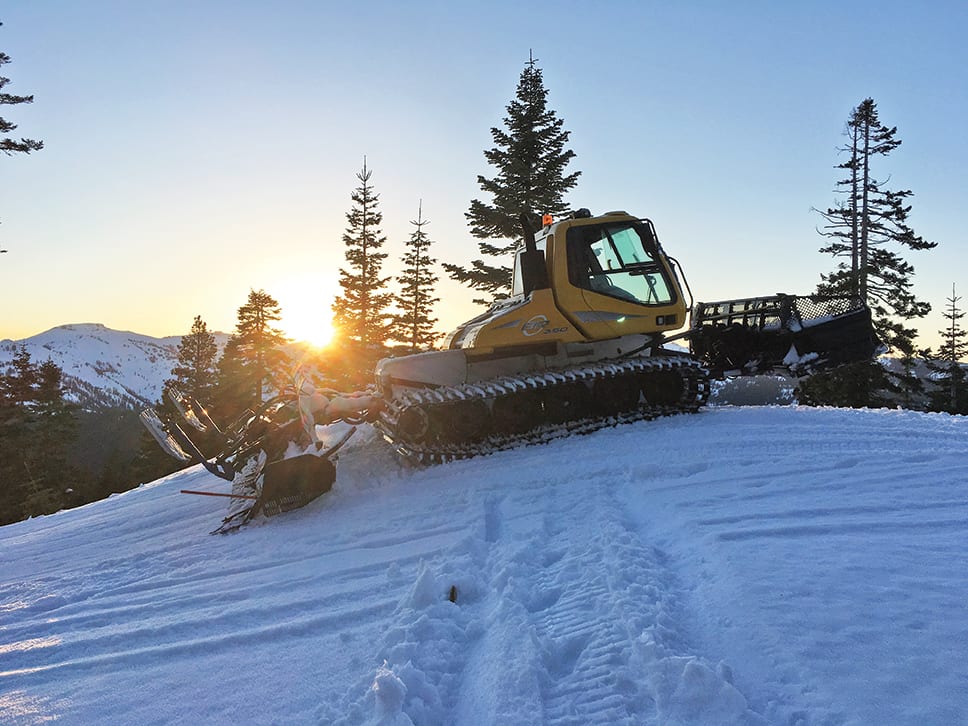 A groomer reaches the top of The Wall, where views open to Squaw Valley and the Sierra Crest, photo by Tim Hauserman

On the evening of April 30, I was in mourning. It appeared as if I had skied my last day of the great winter of 2019 at Tahoe Cross Country Ski Area.

The trail was down to mud in a few places, so I didn’t see how they could take the big grooming machines out to create the perfect corduroy they usually spoil us with. But then groomer Craig Smith texted me at 9 p.m.: “I groomed the trail, get out there tomorrow.”

So I did. The trail had frozen, and, once past a few tough spots, the skiing was surprisingly good. One of the first people I saw was Smith with a big grin on his face, having a blast skiing over his handiwork.

With cross-country skiing, it’s all about the grooming, and for the groomers at Tahoe XC, their passion is to produce conditions that make Nordic skiers smile. 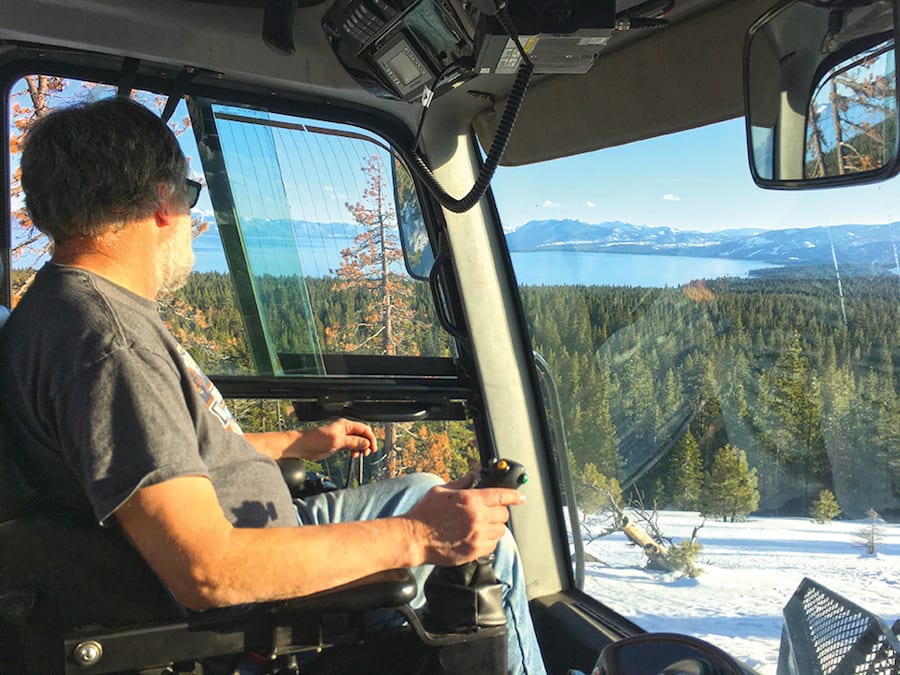 Doug McNair grooms along Kevin’s Crest at the top of the Lake View Trail, photo by Tim Hauserman

In early March, Doug McNair was kind enough to allow me into the cab of his grooming machine. McNair has been grooming trails at Tahoe XC and its predecessor, Tahoe Nordic, for over 40 years and is in charge of grooming at the ski area.

We motored around Tahoe XC’s dog trails and then up the steep side of the Lakeview Trail. At the top, while I marveled at the glorious view of Lake Tahoe, McNair focused on keeping the machine on the narrow trail.

I was then given the rare opportunity to join him on a trip to the top of The Wall. The trail can only be groomed toward the end of big snow years, when the snow depth is at its maximum. The Wall heads up steeply from the Fiberboard Freeway to a great view of Squaw Valley.

We arrived at the top just a few moments before the sunset. It was then that I truly discovered why groomers do what they do.

While a ski trail through the trees looks simple enough, the process of creating that route is complicated.

A grooming machine is not only a snowcat that has to be delicately steered through tight spaces, it also has a blade that can be moved in 12 different directions, a tiller that can be adjusted for the conditions, a comb to smooth out what the tiller chops up, and a set of tracks that can be raised and lowered as it rolls. These machines set both the smooth corduroy for the skate skiers and the dual tracks for classic skiers.

“There is a fine art to the blade and tiller use, and it is constantly changing as you go,” says McNair, explaining that groomers sometimes have to set the tiller deep to cut through ice while other times, when snowpack is thin, they have to keep it light as to not dig all the way down to dirt. “It’s a challenge. It’s different every night. It demands your full attention.”

Knowledge of the ski area and conditions are key as well. For example, McNair knows which areas are the first to lose snow, so he steadily fills them in with white gold from the side of the trail.

Because of the forested terrain they groom, the skills required to create and maintain trails at a cross-country resort differ from a downhill resort with wide-open runs.

“When you think of grooming the backside of Northstar, it’s like bringing a comb across a balding man, back and forth up and down a hill,” says Tahoe XC groomer Bob Wright. “At our Nordic center, it’s like a pinball machine. You’re inches away from trees with the blades, constantly weaving in and out. There are very few places you can sit back and relax.”

In the left hand the groomer has a joystick that steers the machine. In the right hand is a multi-purpose joystick that is packed with switches and buttons that control the blade, tiller and track setter.

“It’s extremely taxing mentally. That one joystick has a ton of different things you can do,” says Wright. “It’s a full-time shift, especially when the conditions are not right. The blade preconditions the snow before the tiller gets it. If you are not on the ball you can dig yourself a deep hole. It dives down.

“There is a lot going on. I’m trying to miss trees, avoid animals and make a good product while going at full throttle. On the long straightaways it seems like you’re going really slow, but when you go through something tight it seems like you are going 100 miles an hour.” 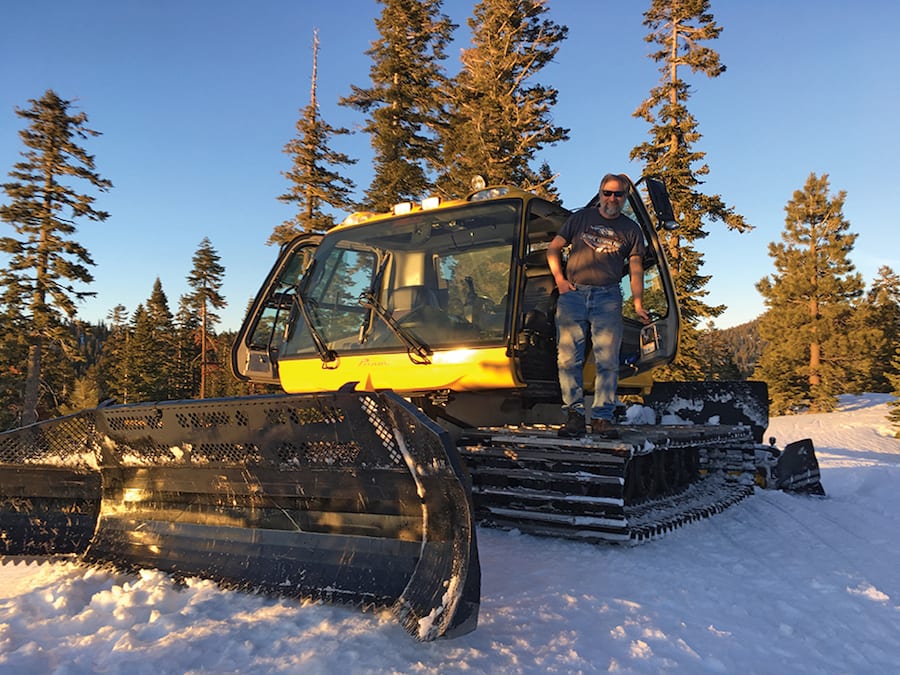 Doug McNair takes a break from his grooming duties at Tahoe XC, photo by Tim Hauserman

There are just four regular groomers at Tahoe XC, plus a sub, Ulf Grigoleit, who steps in if someone can’t make it. They usually head out with two machines at a time. McNair grooms with Craig Smith, and Wright usually goes out with Michael Buss.

While McNair and Smith tend to quietly go about their business, “The Bob and Buss Show” keeps a regular chatter going over the radio. Often they are talking about the snow conditions, but they could also be pointing out how pretty the moon looks.

Buss has been grooming at Tahoe XC since 2004. Before that he drove snowcats for AT&T for 30 years, heading out into storms to repair damaged phone lines. While operating a snowcat to make repairs is different than grooming a trail, Buss says they have one major thing in common: “You break something and it gets expensive. They are machines, and therein lies the problem. They are horribly complicated; they all break.”

In addition to the difficulty of operating the machine itself, the groomers face a variety of other challenges. In the spring, the vexing issue can be deciding when to groom.

With older snow, it’s best to groom in the evening. The trail sets up overnight and is great for skate skiing the next morning. But if it snows after grooming in the evening, it covers up all the work, and there is not the money or the groomers to set out again first thing in the morning. If they groom in the morning instead, and it does not snow, the ski conditions become mushy and slow as opposed to firm and fast. The groomers must make the call, and sometimes they lose the bet.

There are other problems during big snow years. The cat rises up into the tree branches, so the groomers sometimes have to stop and cut branches to pass through. When the fresh snow gets really deep, they double pass. One machine packs it down and the other smooths it over and makes it pretty. The work gets expensive and exhausting for the groomers.

Whether it’s a light winter when there is barely enough snow to groom or a huge winter like 2019, the groomers at Tahoe XC go out every day and produce the best ski experience they can. Most often they are invisible, heading out after the ski area is closed in the evening or before most people hit the trail in the morning.

But the groomed trails they create dictate how much fun will be had at the resort. All the groomers are out there because they take pride in making skiers happy—and, of course, it puts big smiles on their faces when they get to enjoy their own hard work from the night before.

Tim Hauserman wrote Cross Country Skiing in the Sierra Nevada and runs the Strider Glider program at Tahoe Cross Country. Every day he skis there, he appreciates the amazing work of the groomers.

• Only take your dogs on dog trails, and be sure to clean up after your four-legged friend and remove waste bags. Bags or poop left on the trail can become a 20-foot-long stripe of brown once the groomer runs over it.

• Don’t ski after hours. If someone skis over freshly groomed trail in the evening, those tracks will freeze solid overnight and become frozen ruts for the next morning’s skiers.

• Look and listen for groomers and get all the way off the trail before the machines arrive. If they have to stop or go around you, it can impact the quality of the trails. And while you are at it, give ’em a wave and a thumbs up.