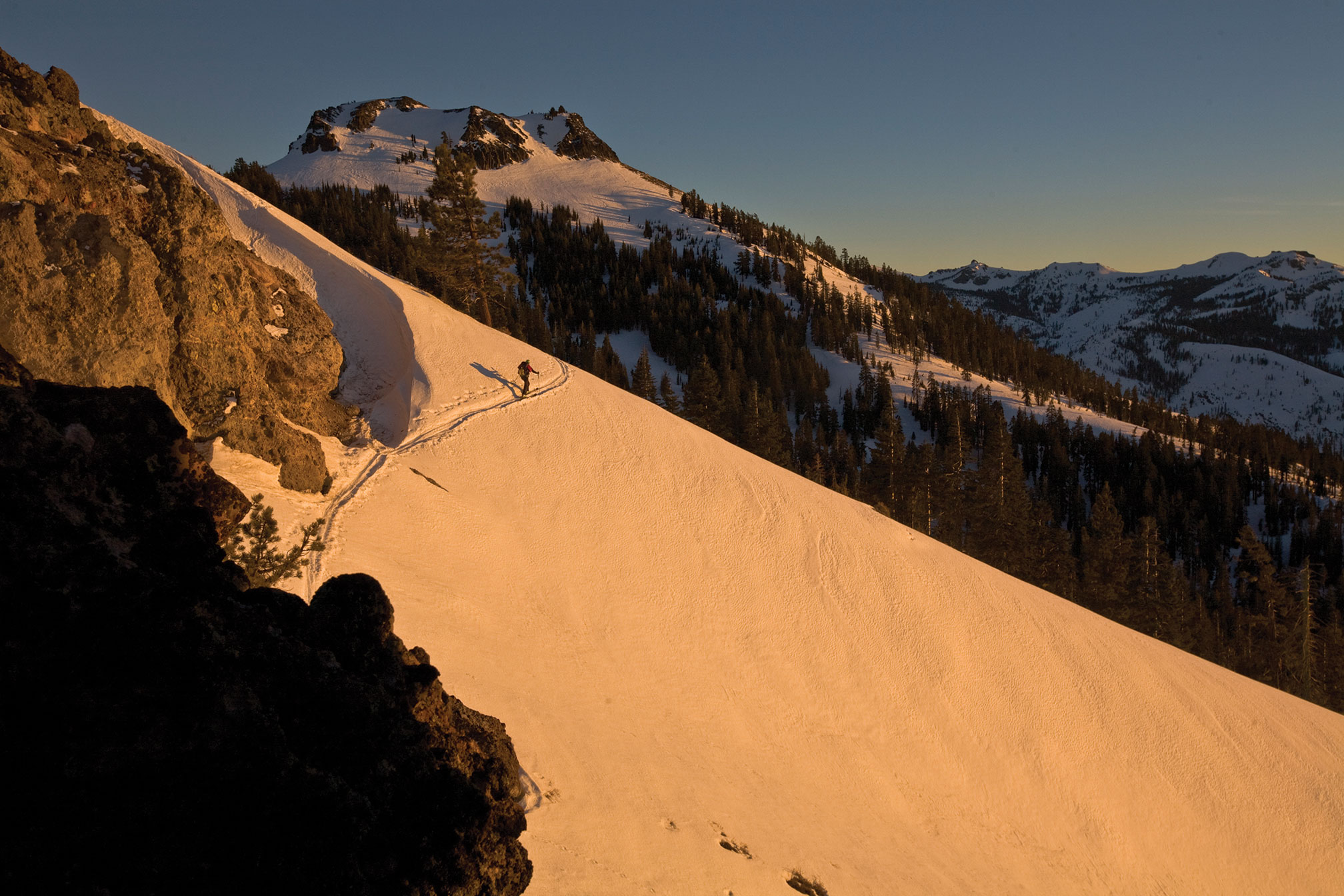 Rylan Cordova skins up a ridge between Sugar Bowl and Squaw Valley en route to the Benson Hut, photo by Ryan Salm

Huts on the Horizon

Strap on skis, a splitboard or snowshoes and head out into a snowy wilderness, and the reward is a transformed landscape, quiet and peaceful, almost magical.

Familiar terrain is made new each winter, somehow different, and that much more special for those few willing and prepared to venture out. Backcountry skiing and snowboarding continue to grow in popularity—but for the vast majority, that exploration stays relatively close to the road’s edge.

It’s a rare breed willing to carry everything needed to go multiple days deep into a snow-covered land, set up a mountaineering tent or dig a snow cave to wait out the long winter nights. But save for a few huts already brimming to capacity each winter, that’s the only way to go beyond a day’s distance in much of the Sierra, leaving countless peaks, valleys, forests and meadows unseen and untouched.

Elsewhere—the Swiss Alps, the Colorado Rockies, Oregon’s Wallowas—networks of huts open up that terrain out of sight of plowed roads, offering safe, comfortable accommodations for skiers, snowboarders and other winter adventurers. And in a twist of fate, one of the biggest challenges of public access and recreation in the Sierra north of Lake Tahoe might also be the opportunity to create a hut system, opening up the region’s backcountry in its magical winter months.

“This is a unique opportunity—we still have to raise millions, but I believe the stars are aligned for this to happen,” says Perry Norris, executive director of the Truckee Donner Land Trust. 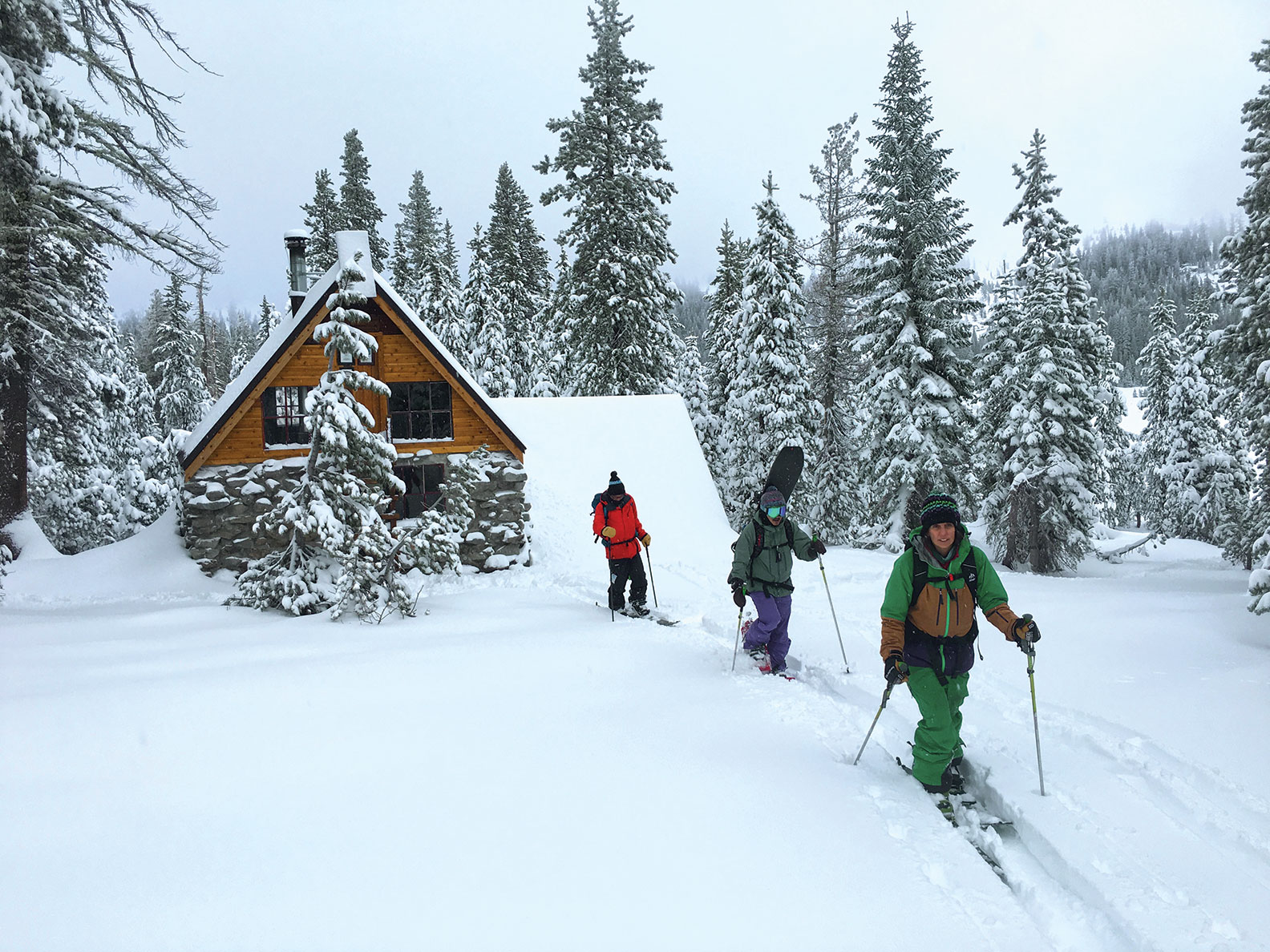 Exterior of the Peter Grubb hut, near Castle Peak, photo by Seth Lightcap

Now in its early conceptual stages, a plan conceived by the land trust and the Northern Sierra Partnership could place up to four ski huts on properties they’ve preserved north of Truckee, not only creating new access, but also potentially growing a network started by four existing Sierra Club huts in the region.

“In the Northern Sierra, there’s always been a disadvantage for recreational access having so much private land. It’s been one of our biggest challenges,” says Lucy Blake, president of the Northern Sierra Partnership. “But now with the private properties we’ve been able to acquire, it creates an opportunity to build these huts we wouldn’t have in a wilderness situation.”

The details are currently being worked out as new acquisitions are still in the works, but potential locations include Webber Lake, near Independence Lake, in the vicinity of Carpenter Ridge or Carpenter Valley, Norris says.

Other details to be hashed out as this plan comes to fruition are the types of huts that could be built—from simple shelters to staffed Alp-style huts; how and by whom the huts would be managed; and how they would work in concert with the existing Sierra Club huts, says Blake, who is optimistic.

“This is something we could get in place in the next five or ten years. It’s completely achievable,” Blake says.

Craig Dostie, a longtime backcountry skier and author of www.earnyourturns.com, recently moved to Colorado from the Tahoe area, and sees the overwhelming popularity of the 10th Mountain Division Hut System in the Rockies. He also sees the potential for more huts in the Sierra.

“It’s all about access, and that’s why huts are so awesome,” Dostie says. “They’re so popular now, many of them need a lottery system to get in.”

The 10th Mountain Division Hut Association website states: “The hut system is extremely popular. The downside of this is that reservations are hard to get… The most popular huts will often be booked solid in February and March.”

Reservations in peak months are processed through a lottery system, with priority given to volunteers who’ve helped maintain the huts, according to the Sierra Club. 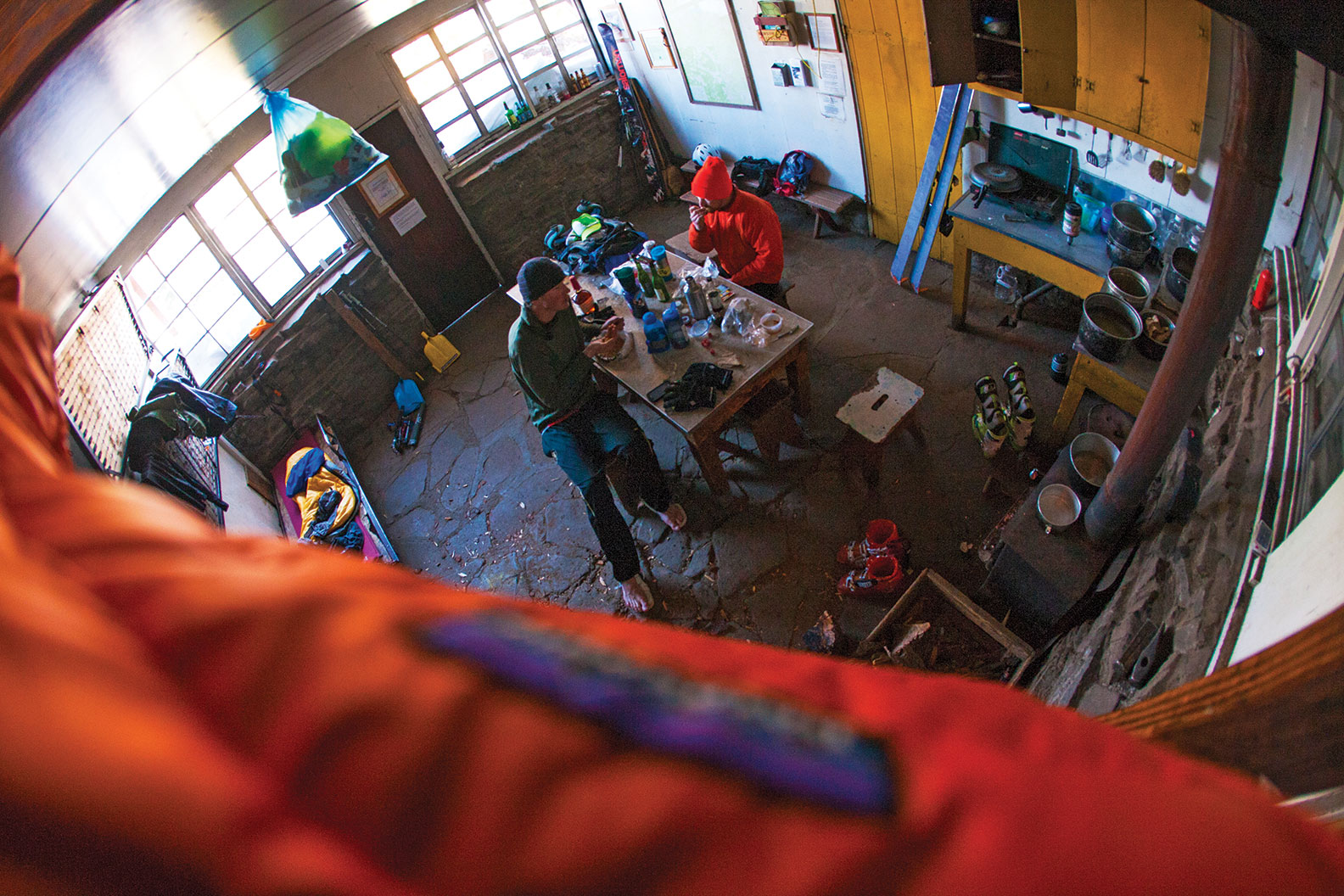 Interior of the Bradley Hut, photo by Ryan Salm

Work on the Sierra Club huts started in the 1930s with the lofty aspirations of mimicking the huts of the Alps, Simpson says, with the now-defunct White Rock Lake Hut built north of Donner Summit in the mid ’30s.

The Peter Grubb Hut, which has effectively replaced the White Rock Lake Hut, was built shortly before World War II, followed by the Benson Hut south of Sugar Bowl after the war, the Ludlow Hut north of Desolation Wilderness in 1955, and the Bradley Hut in 1957, Simpson says. The Bradley Hut was moved out of the newly formed Granite Chief Wilderness to its current location near Pole Creek in the 1990s.

“There would be an opportunity to go to Peter Grubb one night, then head out to Lacy Meadows or Webber Lake or Carpenter Valley,” he says.

Norris says the region that would be accessible by these huts offers great skiing and snowboarding terrain that is challenging to reach today, even for those using snowmobiles.

“When it comes to huts, in the Sierra, we’re kind of behind the times,” Norris says. “We still need to acquire some property, bring some partners on board and raise some money—but we’re really excited. This could create another attraction for our area, providing a visitor-oriented activity that’s currently limited.”

Blake is enthusiastic as well.

“I love the opportunity to ski to a remote hut with a bunch of friends and have a wonderful evening together by a warm fire, to go out and experience the Sierra night sky with a million stars—those are the kinds of memories that are very special, and very unique,” Blake says. “If we can create that, it would be a real contribution to the outdoor experiences in the Northern Sierra.”

For those interested in learning more about fundraising or contributing to the potential huts, visit tdlandtrust.org and northernsierrapartnership.org.

Greyson Howard is a Truckee-based writer who enjoys venturing into the backcountry in the winter.