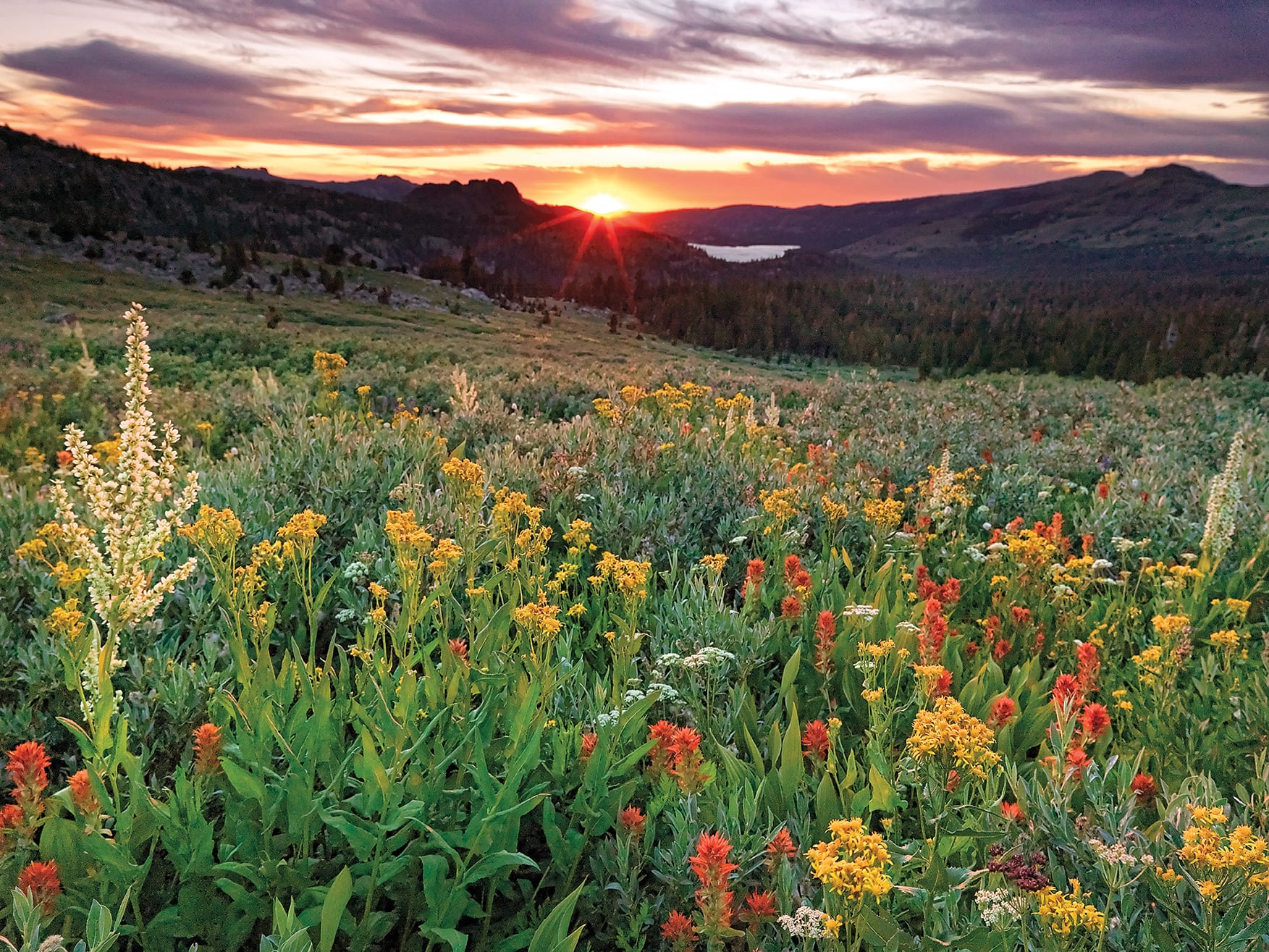 Wildflowers glow as the sun sets on Carson Pass south of Tahoe, photo by Elizabeth Carmel

Off the Beaten Path 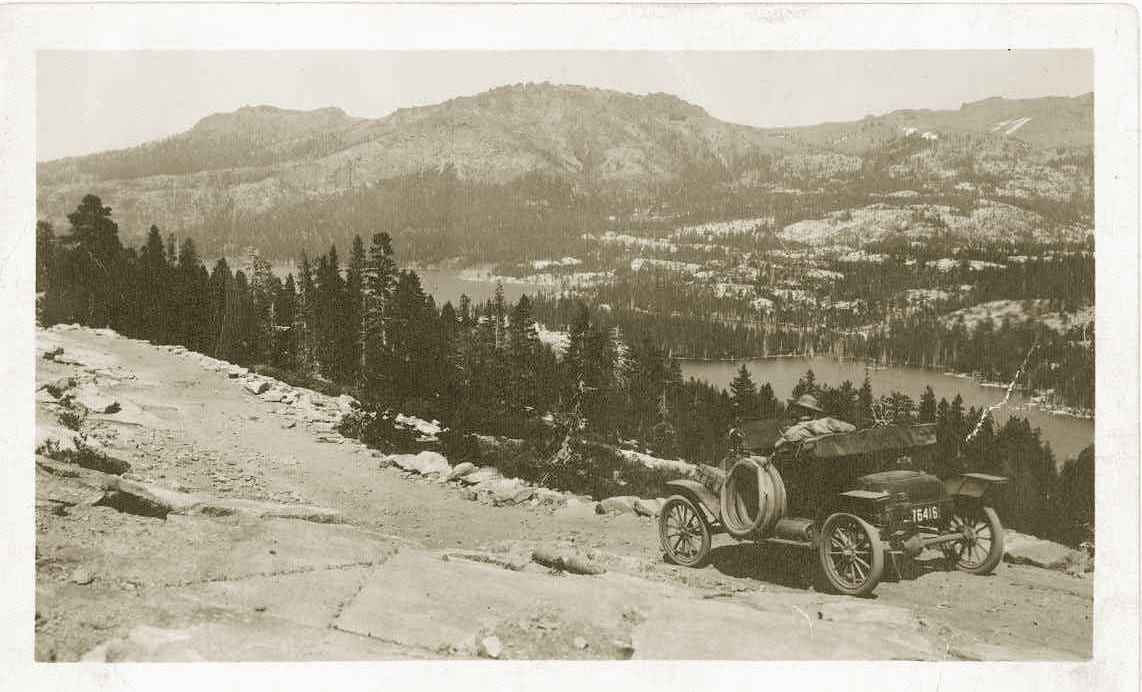 An estimated three million people a year visit the scenic shores of Lake Tahoe, where the local population can swell from its 53,000 year-round residents to 300,000 on peak days. But solitude is not far away.

Just a short drive south of the bustling tourist hotspot is one of the Sierra Nevada’s relatively hidden secrets—Carson Pass—known for its bounty of dazzling wildflowers, exposed granite, clear alpine lakes and rich history.

Once a busy trans-Sierra route that ushered eager forty-niners to California’s golden rivers, relaxed vibes now rule this high-elevation oasis. Today’s Carson Pass is a launch point for day hikers and a resting point for hardened Pacific Crest Trail through-hikers, who bask in the warm hospitality and convenient trailside offerings at the Carson Pass Information Station.

The station, located off of State Route 88 on the 8,574-foot summit of Carson Pass, is comprised of a log cabin built in the early 1990s by volunteers of the Eldorado National Forest Interpretive Association. Despite its location along an all-season highway, the station is remote, with no running water or electricity, yet it flourishes thanks to the 60 volunteer docents who keep it open seven days a week from Memorial Day Weekend through September.

These docents enjoy greeting the hikers, hearing their stories and making them feel comfortable—if for just a short time before the backcountry travelers resume their journey. The docents also take pride in passing on their knowledge to visitors about the region’s vegetation, geology and history on free educational walks. 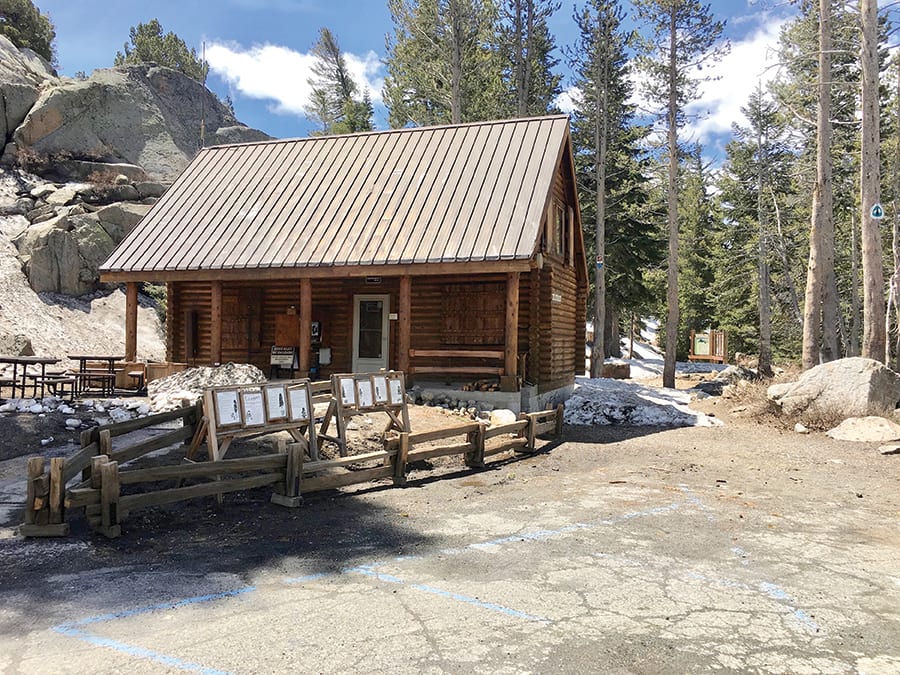 The Carson Pass Information Station is located at the crossing of State Route 88 and the Pacific Crest Trail on the 8,574-foot summit of the pass, courtesy photo

Named after famed Western frontiersman Kit Carson, Carson Pass is located on the California Trail that stretched 2,000 miles from Independence, Missouri, to Sacramento.

In 1843, Carson joined John C. Fremont to survey the Oregon Trail. Upon completing the survey, their team of 27 men turned south and followed today’s U.S. Route 395, passing the Truckee River and another unnamed river before continuing on to Bridgeport, where they hoped to cross the Sierra en route to Sutter’s Fort in Sacramento.

But by the time they reached Bridgeport it was the dead of winter in early 1844. Realizing they could not cross the Sierra’s imposing, snow-covered peaks at this location, they returned north and turned west at the unnamed river they had passed earlier, which Fremont named the Carson River as a sign of respect for his friend’s prowess as a mountain man, including his knowledge of native cultures and languages. 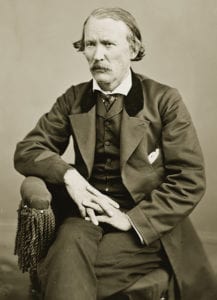 Although they faced arduous travel through 20 feet of snow in the Carson Pass area, the men managed to cross the unnamed pass with their horses, mules and hundreds of pounds of mapping equipment. Carson, who went on to survive many more harrowing adventures with Fremont, returned later in his life, and over time people began to refer to the crossing as Carson Pass.

After the Donner Party tragedy in 1846, and with the difficulties associated with the Truckee River Route, pioneers soon learned of the easier and faster route across the Sierra at Carson Pass.

In 1848, part of the Mormon Battalion traveling east toward the Great Salt Lake crossed Carson Pass following an established Miwuk and Washoe Indian trading route. On their way to Utah, they informed several passing westbound parties of their successful crossing, which opened the floodgates. During the early height of the California Gold Rush between 1848 and 1852, approximately 250,000 pioneers traversed Carson Pass en route to gold country. 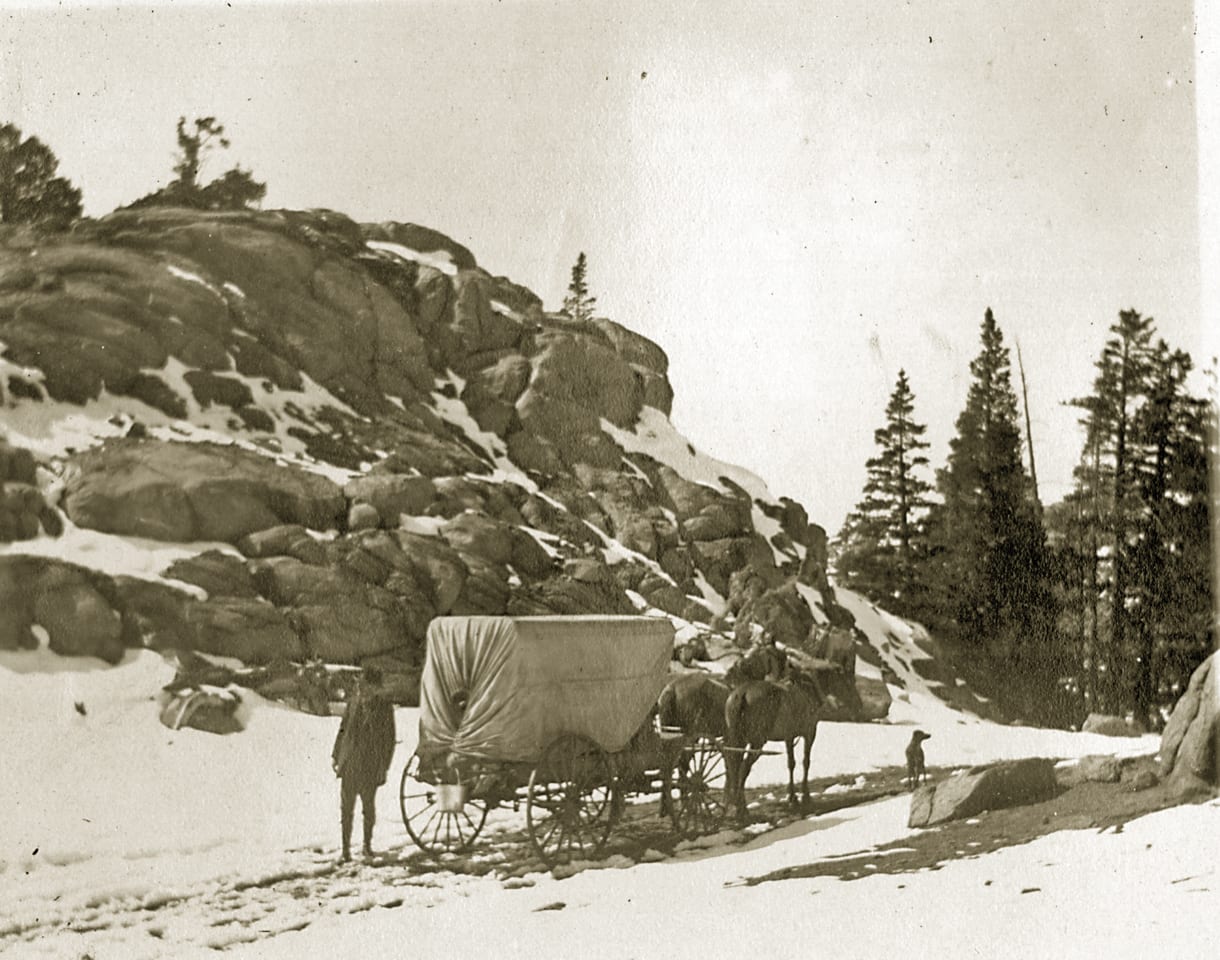 The Carson Pass Information Station not only was built along this historic east-west corridor, it’s also located on one of the more famous north-south routes of the West—the 2,650-mile Pacific Crest Trail from Mexico to Canada.

And with that comes a daily barrage of through-hikers from mid-June through mid-July.

These are no ordinary hikers. Having walked about 1,100 miles, and with 1,500 to go on their months-long trek, they are lean, hard-scrabbled, seasoned, tough. They have walked through two or three pairs of boots, consumed an average of 5,000 calories a day and shed 20 to 25 pounds of body baggage. 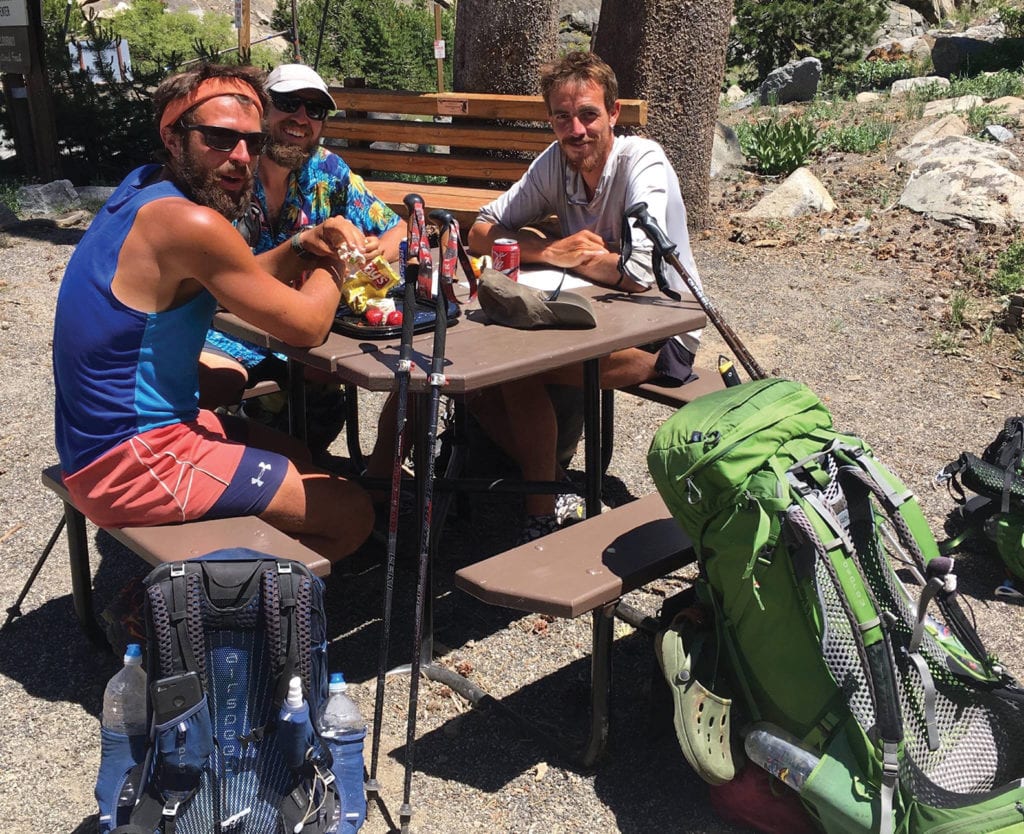 Pacific Crest Trail through-hikers enjoy a break at Carson Pass on their 2,650-mile hike from Mexico to Canada, courtesy photo

It has been jokingly suggested to stand upwind from hardened PCT through-hikers, who arrive at Carson Pass with an undeniable patina, well earned after weeks of crossing hot deserts, fording frigid snowmelt streams and walking long distances at high altitudes on deep snow.

But these men and women receive their due respect at the Carson Pass Information Station, where docents greet them with trail-angel kindness before seeing them off to resume their adventures.

Carson Pass is more than a pit stop for PCT hikers, though. This picturesque outpost high in the Sierra is a short jaunt from the steeps of Kirkwood Mountain Resort, the trout-filled waters of Caples and Red lakes, among others, and the majestic grandeur of Mokelumne Wilderness. The region is rife with day hiking and overnight backpacking opportunities, as well as car camping for the family.

So when the crowds swarm Lake Tahoe, head south to the relative solitude of Carson Pass, where the legacy of early Western travelers meets modern day through-hiker grit—all in a spectacular mountain setting.

Dennis Price is a retired teacher and manager of the Carson Pass Information Station. Follow the station’s Facebook page or go to the website, enfia.org, for more information. 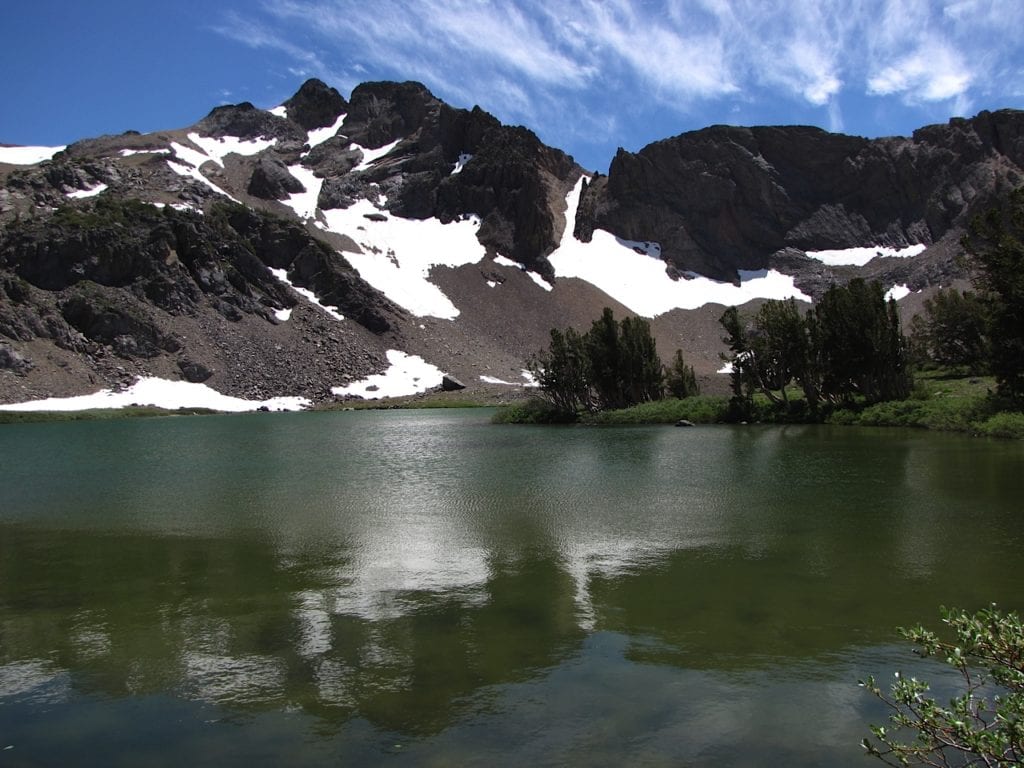 • Hike With a Naturalist: Take time to enjoy the natural beauty of Carson Pass while hiking and observing local flora and the uniqueness of the area.

• Children’s Wild Treasure Hunt Walk (August 2, 3, 4, 12, 13): A great experience for young hikers who will earn their Junior Ranger patch at the end of their walk.