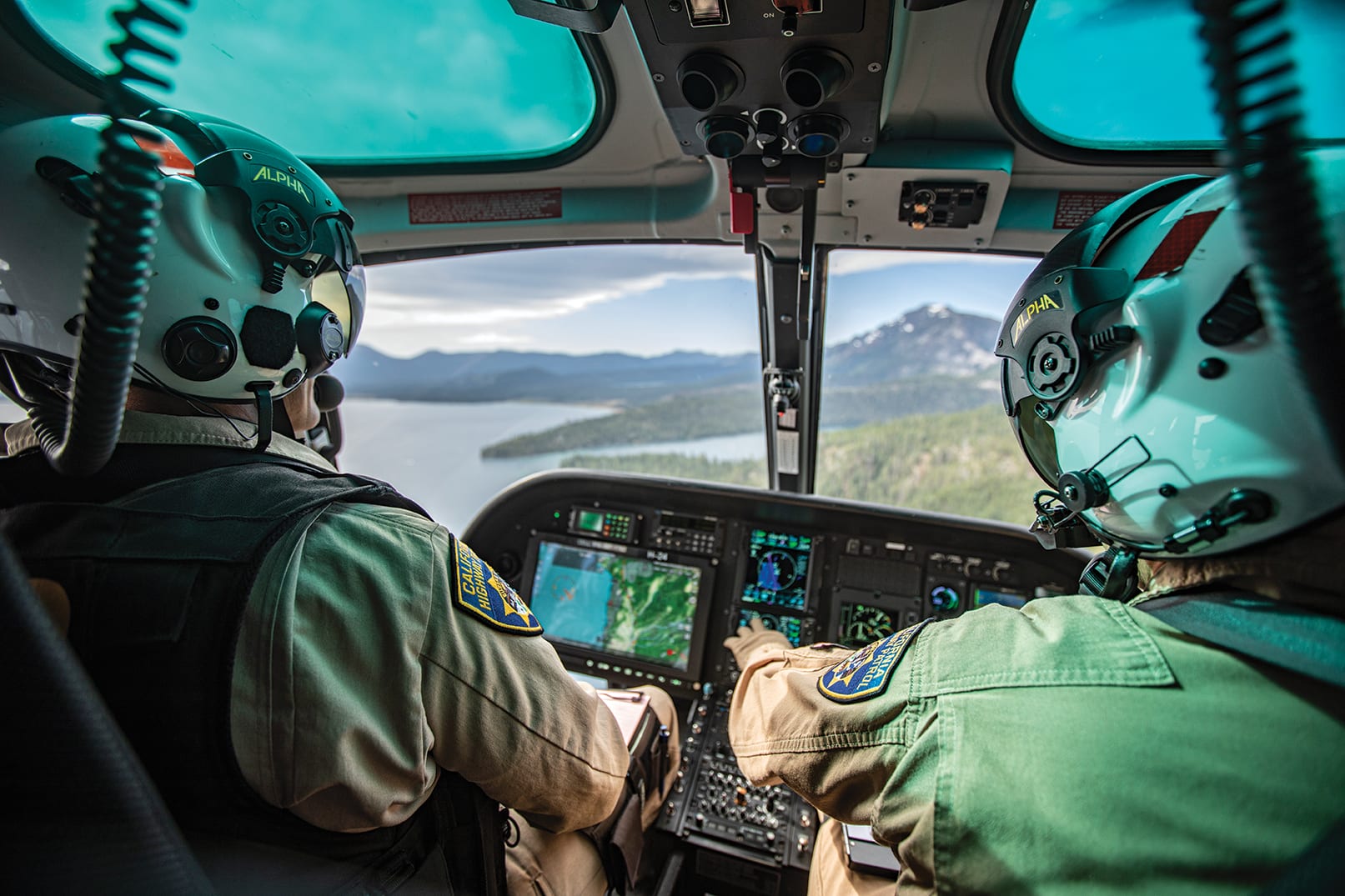 The California Highway Patrol is best known for the troopers who safeguard the state’s highways, but an elite team of helicopter rescuers also responds to the most complicated emergencies by air

Brandon Hallam is hanging out the open door of a California Highway Patrol helicopter above the jade-colored pools and rushing rapids of the South Yuba River.

“Slow down just a hair,” he calls to pilot Monty Emery, as he scans the river for any sign of a missing swimmer.

The helicopter whirls slowly down the narrow river canyon as Emery and Hallam work together as a perfect team, navigating cliffs, trees and tricky canyon winds in a delicate dance between the forces of nature and the capabilities of their Airbus H125 helicopter.

This canyon flight might seem like a death-defying stunt to normal people. But for the members of the Valley Division of the California Highway Patrol (CHP), it is a relatively standard day. This elite air unit of the CHP consists of expert pilots and highly skilled technical rescue teams, one of 13 such air divisions in the state.

While the air patrol conducts some law enforcement activity, they are becoming best known for courageous rescues and delicate medevac operations, often in the fickle weather and inhospitable terrain around Lake Tahoe. Depending on the season, CHP paramedics and pilots are plucking injured skiers from backcountry peaks, hoisting stranded swimmers to safety or rushing hurt hikers to medical care.

“The number one priority of the CHP helicopters is preservation of life,” says Matt Calcutt, a flight officer and paramedic. “We typically run our operations at one-third search and rescue, one-third medevac and one-third law enforcement.” 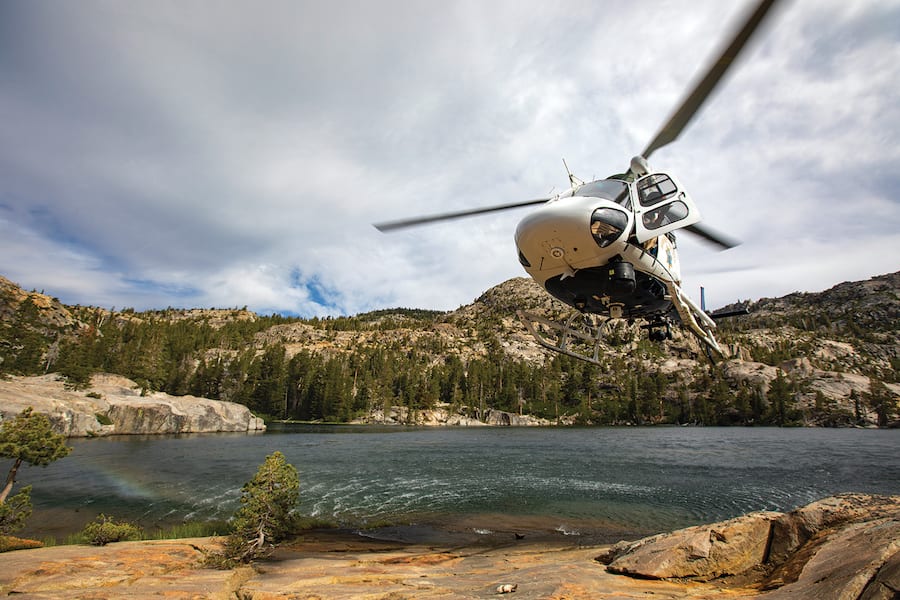 Calcutt, and every other officer in the unit, did not just miraculously arrive on this special helicopter patrol assignment. They had to go through the academy and serve two years as CHP officers before being considered. Calcutt came to the academy after 10 years of experience working with Squaw Valley Ski Patrol and the Squaw Valley Fire Department. He was looking for a career that involved aspects of professional search and rescue, but even after seven years working as a CHP officer, landing a spot on the helicopter unit wasn’t a guarantee. 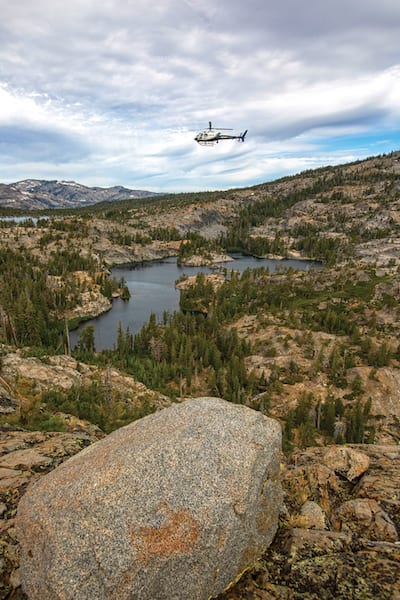 “You almost have to go in with blind faith—work hard, do a good job and hope that it will all pay off,” says Calcutt, speaking of the extremely competitive program. “Luckily, it worked out for me.”

Calcutt became involved with the unit in 2008 and played an instrumental role in developing the Hoist Rescue Team, which incorporates specialized rescue teams from local fire departments in the Truckee-Tahoe region.

“Matt came to us because he recognized the need and value in having a skilled and trained-up team that could help out,” says Chief Allen Riley of Squaw Valley Fire, who with Calcutt and other five local departments formed the gold standard in mountain rescue divisions. “Twenty years ago fire departments were all volunteer-based with maybe a few paid guys. We had this idea to start a regional team so that if we had a technical incident, we could page out the group and anybody trained that was on duty in the neighboring districts could respond to the calls.”

The program is modeled after the mountain rescue that one would see in the Swiss Alps, specifically the Air Zermatt Unit where helicopters and professionally trained and skilled doctors, nurses and technicians descend into complicated terrain to rescue patients who have been injured in the mountains.

In 2017 the Truckee-Tahoe program became official with all members of the hoist rescue team (two firefighters per station) fully trained as paramedics, in swift water and ropes rescue and incident command, as well as avalanche certifications. The members are also required to attend one training per quarter to keep up to date with their hoist rescue team certification.

These teams are critical to the CHP program, and if an evacuation is requested, helicopters can arrange to pick up a team member at the drop of a hat, load them up and get them out into the field to package and help extricate a patient. A good portion of these scenarios result in the team hiking or skiing themselves out due to the strict weight regulations in the choppers.

“I’ve seen these types of rescue in the mountains of Europe and thought to myself, ‘Why don’t we have this available in the mountains in the U.S.?’” says John Morrison, a local backcountry skier. “When I heard they had put the cable on the helicopter, I was psyched. I also never thought that I would be using it… ” 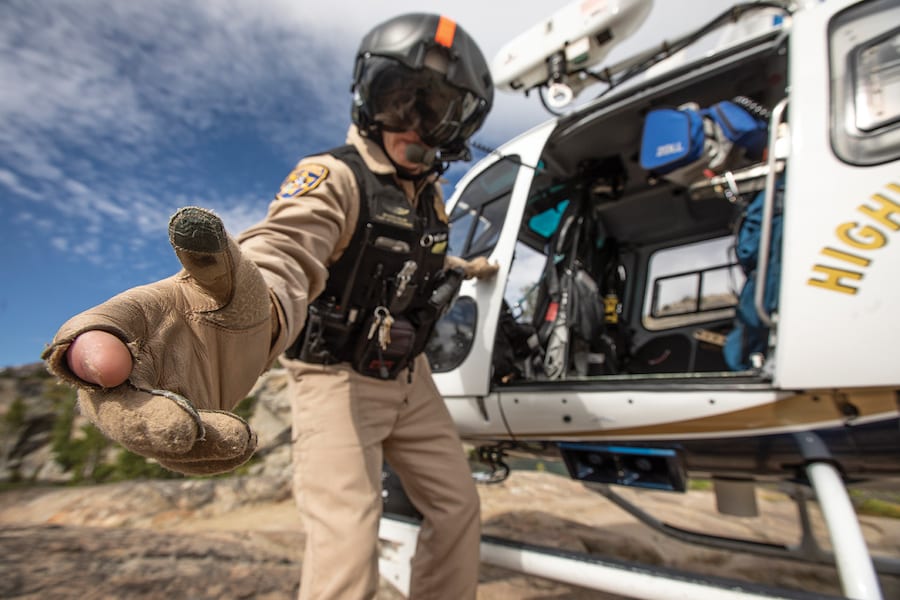 On December 9, 2018, Morrison used that hoist cable. He was backcountry skiing a hanging snowfield on Mount Tallac when he triggered an avalanche—and his only exit was a 200-foot drop. The fall resulted in a broken pelvis, back and neck, as well as a concussion.

“I wouldn’t be here if this program didn’t exist” says Morrison. “I needed to get out of the mountains as quickly as possible and it was only because of that long line extraction that I was able to get to the hospital in time.”

The winds made it impossible to land the helicopter anywhere on the mountain that day, and once the team realized they weren’t landing, they lowered the hoist cable. Kurt Gooding, a hoist rescue team member from Squaw Valley Fire Department, dropped onto the scene to prepare Morrison for the extrication. Once they hoisted Morrison up to the chopper, Calcutt hung out of the side of the helicopter and held tight to the litter, hugging it around the skid.

During the delicate maneuver, he had to be meticulously aware of every movement so he did not throw the machine out of alignment. The severity of the accident and the precarious position of Morrison on the outside of the machine forced the team to think ahead and call a Care Flight helicopter to meet them on the ground to continue the evacuation. 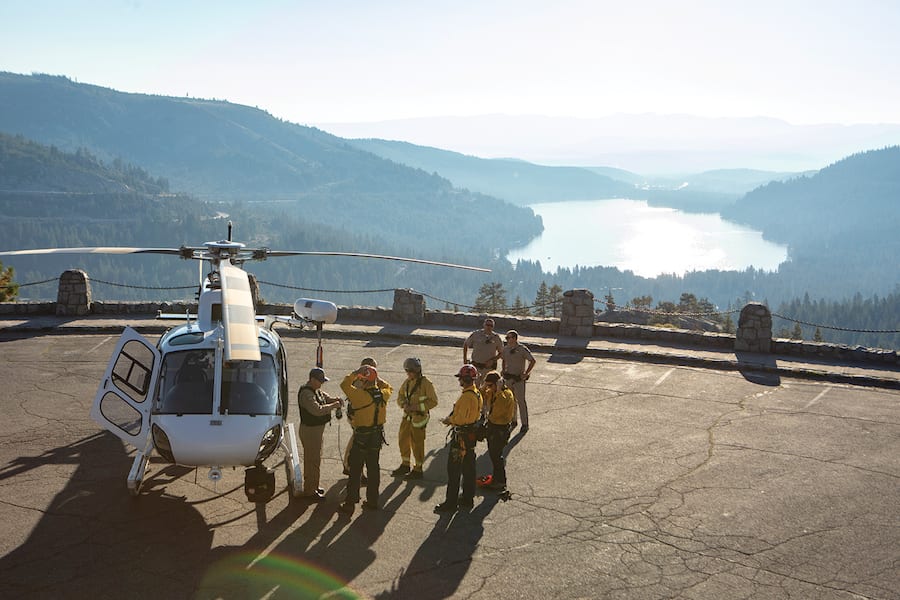 Morrison’s survival is one of the many heroic stories of the team stepping into danger zones to rescue victims.

Emery, who has been flying for nearly 32 years, tells tales that could rival a high-octane Hollywood action movie. He’s flown onto ridgelines in strong winds, tacking one skid on the snow for an evacuation, and hovered over a turbulent river to scoop a weary swimmer off a rock. 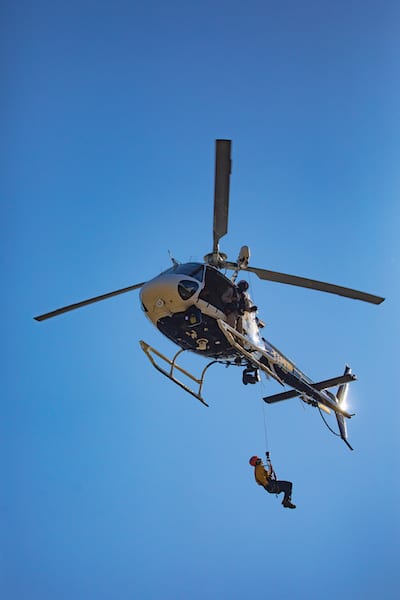 “That was probably one of the coolest rescues,” Emery says of the river evacuation. “I was worried I was going to knock him off the rock with the force from the rotor… he was hypothermic and unconscious, probably one slip meant death… but we got him out of there.”

There is also the tale of the hiker who got struck by lightning on top of Tinker Knob while taking a picture. The force of the lightning bolt blew his clothes and shoes off, but with assistance he was able to walk to the helicopter and lived.

Or there was the time that Emery went out with flight officer Mark Flores in the winter months to clear off the repeater tower on Babbitt Peak north of Stampede Reservoir, only to get caught in whiteout conditions, rugged winds and bitter cold, forcing the team to hunker down and wait for Sierra County Search and Rescue to help evacuate them. After that incident, Emery always travels with a heavy-duty, insulated jumpsuit in the back of the helicopter.

Despite all of the good deeds that the CHP does in the mountains, a lot of people are unaware of the program. Even Morrison, an experienced mountaineer and skier, only realized the full capabilities of the team recently.

“The program still isn’t that well known, and it hasn’t been that active in the mountains yet,” says Morrison. “CHP isn’t just policing the highway, they are out there for the public good.”

As part of the program, the CHP performs rescues free of charge—another lesser-known fact, and one that may alleviate the fear some may have of being charged exorbitant fees if faced with a helicopter evacuation.

While all of the technical skills of the team are critical for a successful rescue, it is the team dynamic itself that shines in these dangerous, adrenaline-filled moments.

“A lot of the program is based around teamwork,” says Calcutt. “Everybody has to get along and be on the same page or it just doesn’t work.”

In many circumstances the team is as fine-tuned as the machines they operate. Presented with daring scenarios and harrowing rescues, they work together with the utmost precision and focus. Perhaps these are the driving forces behind the crew doing what they do—the benefits and perks to saving lives.

“So many people think CHP is just on the roads and highways,” says Hallam, “but we are up here as well… helping people. And seeing the utter look of relief when you are saving somebody’s life is something that is pretty special.”

Trevor Husted is a freelance writer and guide based in North Lake Tahoe. He insists he’s not a cop, but he did play one on TV.