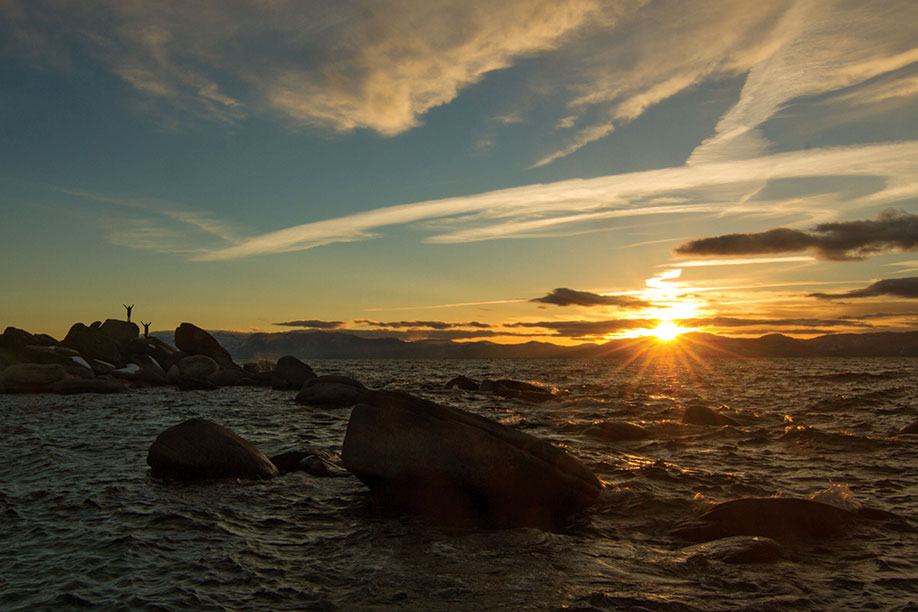 Tahoe sunset from the East Shore, photo by Dylan Silver

My Grandpa likes to say, “It’s the struggle that keeps you alive.” As I sat by his hospital bed in April, it struck me that this motto applies to Lake Tahoe.

As a South Shore–based journalist, I watch the residents, businesses and agencies tussle over what they believe is right. Though often lost in a bureaucratic fog, it seems there’s a fight of one kind or another over every decision that’s made in the Basin. It seems this is the struggle that keeps our area alive.

Grandpa had been in and out of medical care for a couple weeks. He’d lived at home for 60 years, the past four mostly alone. Then, one spring day, he fell. Though the spill hadn’t injured him, doctors found he was anemic with a dangerously low level of oxygen in his blood. He became weaker, no longer strong enough to march around his house to the tunes of Wagner and Tchaikovsky.

He had been a boxer in his earlier days. He pounded on Navy featherweights, eventually earning a regional title. After the service, his pension for fistfights gave way to less physical battles. He earned a degree in mechanical engineering from Chico State and moved on to Stanford.

Around that time, Lake Tahoe was the subject of a continental argument over where to host the 1960 Olympics. European nations believed that an underdeveloped ski resort in California’s Sierra Nevada was hardly worthy of the Games. With solid financial backing, area leaders won over the International Olympic Committee and the rush to build was on.

As Lake Tahoe started to blossom with development, so did Grandpa’s hometown of Palo Alto. He watched the walnut orchards fall to new subdivisions. Freeways replaced the old highways. Apartment towers sprouted like big gray weeds. A small company named Apple opened in nearby Cupertino.

It may have been the rapid and colossal changes in the Bay Area that brought out Grandpa’s dissenting nature. I’m not sure when he began questioning and debating everything. But as long as I can remember, a good, old-fashioned argument around the dining room table has been Silver family tradition.

His skepticism extended outside the family home. Grandpa would quibble with waiters, retail staff, insurance salesmen and endlessly with his doctors and nurses. If someone needed to see his driver’s license, he’d make it absolutely clear he doubted their intentions. If someone asked him to sign something, the entire document would have to be scrutinized.

I see my Grandpa in Lake Tahoe’s daily battles. Every change here is subject to doubt. All decisions are weighed on all angles. Often, the fights center on The Lake’s water clarity, where everything from pine needles to road salt is up for scrutiny, but interest groups manage to clash on most every subject, no matter how trivial. Governments from two states and five counties, countless conservation agencies, grassroots organizations and many independent residents engage each other. When you stand back, these fights for and against change almost resemble a pulse. It’s just one way you know Lake Tahoe is alive.

As Grandpa wrestled his anemia, our family decided he would move out of his house and into an assisted living facility. There were few other options. Nonetheless, the transition wasn’t easy.

Grandpa left the hospital on a Saturday. We wheeled him into the big generic building and booked him a room. Without the mementos of his life and 62-year marriage, he was heartbroken. He gave me his Chief Joseph surrender, “From where the sun now stands, I will fight no more forever.”

He looked so weak, sitting there in his chair. His eyes drooped under messy gray hair. No one knew how long he had left. We started to move things in. Photos of my late grandmother. His television. His books and a mahogany bookshelf built by my great-grandfather. We ate a quiet dinner with him in the dining room before leaving for the night.

The next morning we arrived and found Grandpa smartly dressed, sitting on the edge of his bed. We hauled in a few boxes and the old man was quick to direct us where to put them. One of his caretakers came in and wanted to examine him. He fought this one off. I laughed and asked what happened to the surrender.

All he had to say was, “That was yesterday.” The rest of the day, he tore into us over one thing or another. By lunch, we’d tallied a dozen small disputes.

Though they can be difficult, these struggles improve his quality of life—in fact, they are what keep him alive. They are something I cherish. Just as my Grandpa’s fights let us know he’s vital, Tahoe’s many disputes—trivial and weighty—remind us how much we all still care for our beloved Lake.