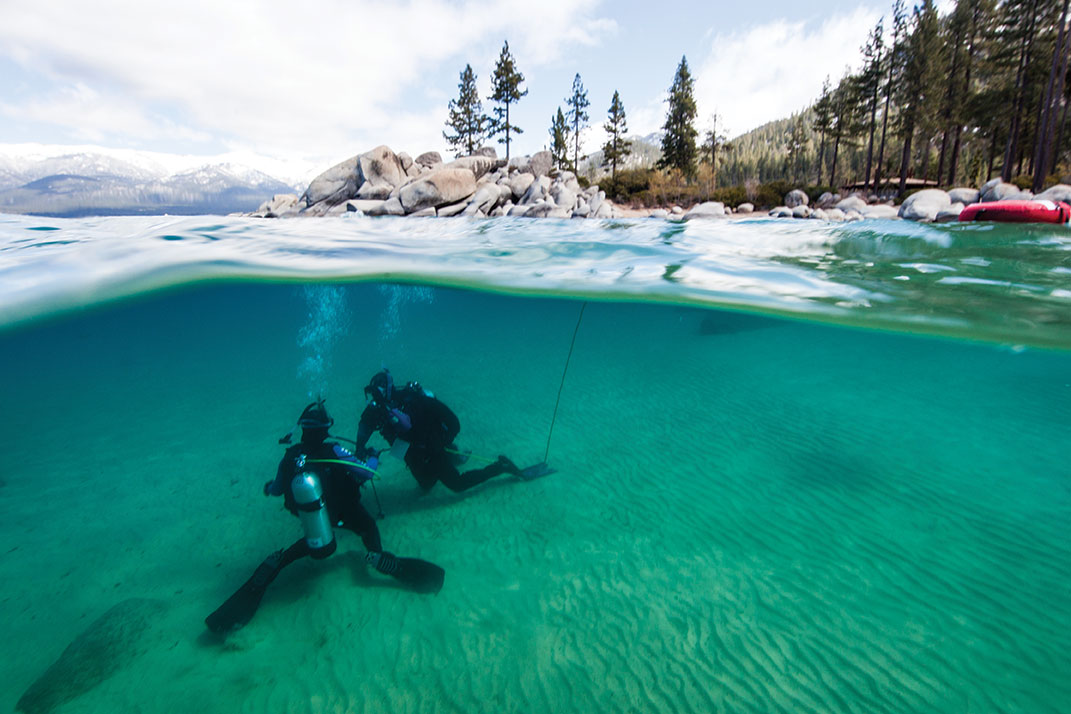 Many of Lake Tahoe’s most luscious myths revolve around what lies beneath its surface. There’s Tahoe Tessie, the amiable ichthyosaur-like creature whose grainy photograph once graced the front page of the Tahoe Daily Tribune on a chilly April 1. There’s the Lady of the Lake, the attractive mermaid who reportedly drags lustful fishermen to her dark underwater cave. And who could forget Jacques Cousteau’s harrowing and fictitious dive into the Lake of the Sky? As the myth goes, the famous French explorer surfaced, only to say, “The world is not ready for what’s down there.”

I cannot help but think of these stories and others as I prepare to sink into the less-than-inviting fathoms of Hurricane Bay. The blue water is cold and notably dark, like it’s hiding something. The air gurgles from my buoyancy-compensating device and I descend toward the sandy blue bottom. Drops of cold water trickle into my wetsuit, and the hair on the back of my neck stands on end.

Lake Tahoe holds an underwater fantasyland. From shipwrecks and underwater forests to mazes of house-sized granite boulders, Tahoe’s subsea has plenty of intrigue for scuba divers. But those who dare to explore amid The Lake’s signature clarity must brave cold temperatures, complications due to altitude and, of course, the fearsome lore drifting within one’s own imagination.

“I think diving brings out the primitive instinct where you just feel vulnerable and exposed,” says Mike Rubini, a South Lake Tahoe diver. “Sometimes I get that feeling where I feel like something could be watching me. Just looking out into the depths is like looking out into space. Every time you go diving, it’s exploring. And it takes a certain amount of courage.” 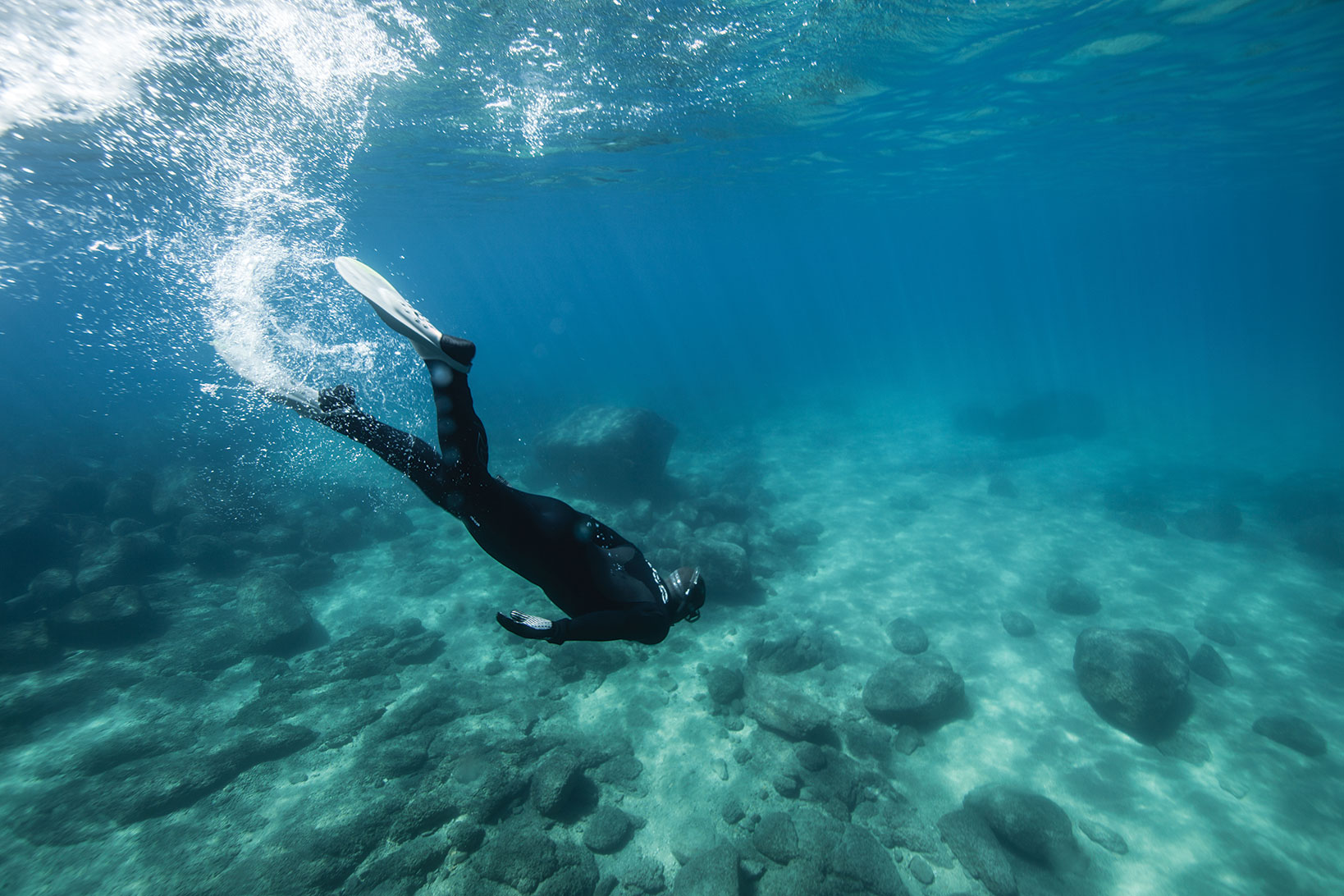 Jacques Cousteau invented modern scuba diving (SCUBA stands for self-contained underwater breathing apparatus) in the 1940s. The French explorer used his invention to traverse never-before-seen underwater worlds, diffuse submarine mines during World War II and test the limits of the human body underwater. There is no record of Cousteau visiting or diving in Lake Tahoe.

Sierra Dive Center opened in 1968. Since then, there has been a steady stream of divers poking around at various depths in all four seasons. Today, there are more than ever.

“When I first got the dive store, we would do about 50 or 60 diver certifications per year. Today, that’s in excess of 700 to 800 that we’re doing through this store alone,” says Chestnut.

What is Down There 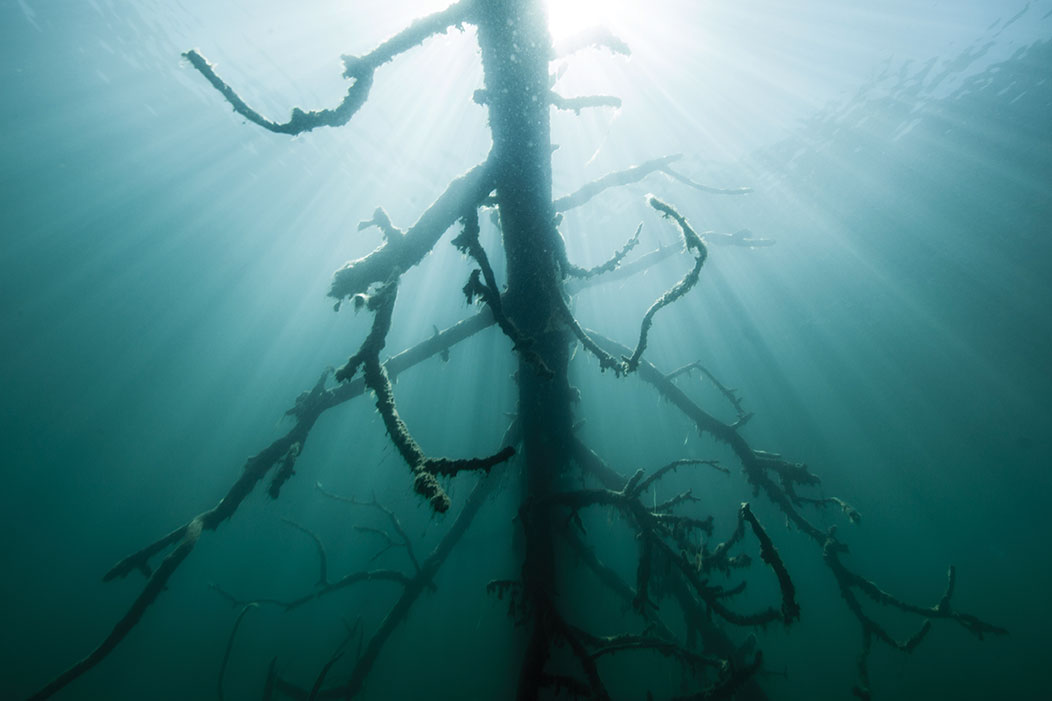 Sunbeams refract around a submerged pine tree on the west end of Emerald Bay. The tree, as with many
others in the area, likely fell into The Lake after a centuries ago landslide

As I slip downward, the light turns an inky blue. Forty feet. Fifty feet. Sixty feet. The eight millimeters of neoprene squeezes my body under the weight of the water, and the cold does not relent. I kick with my fins, cruising along the open gravel slope. Out of the cobalt gloom, a massive shape emerges.

It’s a tree, an old growth Jeffrey pine, five feet in diameter. The fallen log’s branches reach upward toward the white glimmer of sun; its huge hulk is coated in fine white sediment, giving it a ghostly paleness. Other logs lie next to it, apparently fallen from a barge during Tahoe’s great lumber years.

Diving in Lake Tahoe is not diving in the ocean. There is no coral. There is no seaweed. There aren’t very many animals. Realistically, seeing even a single trout on a dive is not guaranteed. But there is clarity and depth, especially in some parts of The Lake.

“The Rubicon Wall is always a spectacular dive because you can literally stand on shore and throw a rock into 1,100 feet of water,” Chestnut says. “It’s a straight vertical wall. When you swim over the edge of that it’s pretty amazing.”

An appreciation for geology adds to an underwater experience in the Lake of the Sky. If one knows what to look for, it’s possible to actually see evidence of the major events in Lake Tahoe’s history. The underwater slope of the northwest shore was the site of a massive submarine landslide that caused a 50-meter tsunami 40,000 years ago.

As the sunken Jeffrey pine shows, The Lake bottom contains more than rocks and sand. In Emerald Bay and in parts of Fallen Leaf Lake, thick trees stand 60 to 200 feet below the surface, where they once grew during a prehistoric drought. Rainbow and brown trout love wandering these submerged woodlands in search of minnows and other prey.

I chose Hurricane Bay not for the fallen trees or the easy access from the shore. I wanted to go see Alley Cat, a sunken 25-foot sailboat. I never found it. As one would imagine, there are dozens of wrecks in Lake Tahoe, some very old, many too deep to discover. On the south side of the Emerald Bay Underwater State Park are two 100-foot wooden barges, which are the most popular wrecks with local divers. 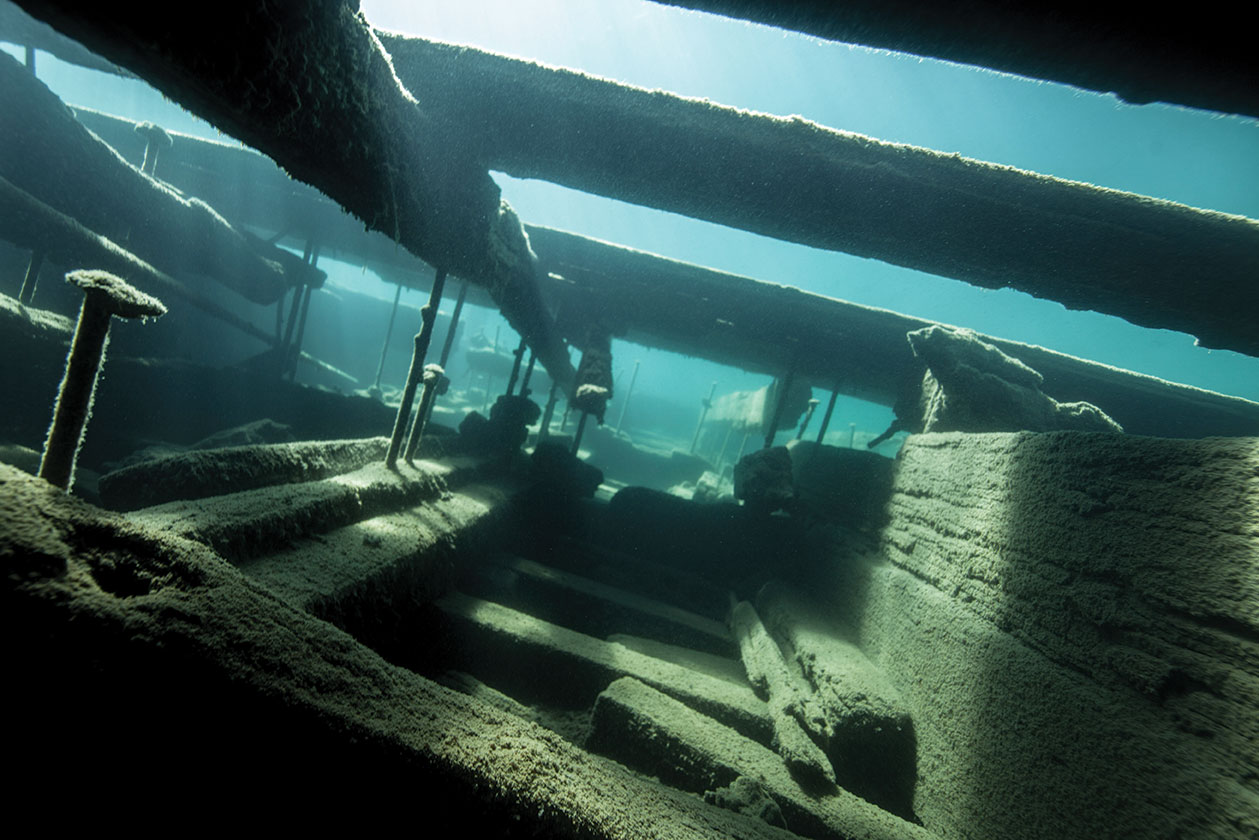 Two sunken barges sit on the south side of Emerald Bay

In 2002, technical divers reached one of the deepest and most famous shipwrecks in The Lake, the S.S. Tahoe. (You can read more about the find in Tahoe Quarterly’s 2015 Best of Tahoe edition.) Using specialized equipment, the team dove more than 400 feet to reach the 110-foot steamship hull. Completed in near darkness, the feat is not for every diver. After all, recreational scuba in Lake Tahoe has enough challenges without adding excessive depth.

The Cold and the Altitude

After kicking past the Jeffrey pine and giving up hope of finding Alley Cat, I continue down the slope. My fingers and toes tingle and the pressure makes it difficult to breathe. At 80-feet, I start to feel nauseous. I begin upward at the scuba standard pace of no more than 60 feet per minute.

I hit the surface. The difference in water temperature was immediately clear. Spring sun had warmed the top few feet to somewhere around 55 degrees, while the temperature below 10 feet hovered near 40. My dive lasted barely 30 minutes.

The cold water is the biggest hurdle to diving in Lake Tahoe, says Chuck Weber, owner of Tahoe Dive Center in Carson City. I can vouch for that. Most scuba divers prefer the comfort of the tropics to even the summer temps of mountain lakes. Despite the layers of rubber wetsuit, the cold was overwhelming to Gabriella Bravo, who dove at Sand Harbor’s Diver’s Cove in April with Tahoe Dive Center instructor John Lawrence.

“It feels like a permanent brain freeze,” Bravo says after getting out of the water. 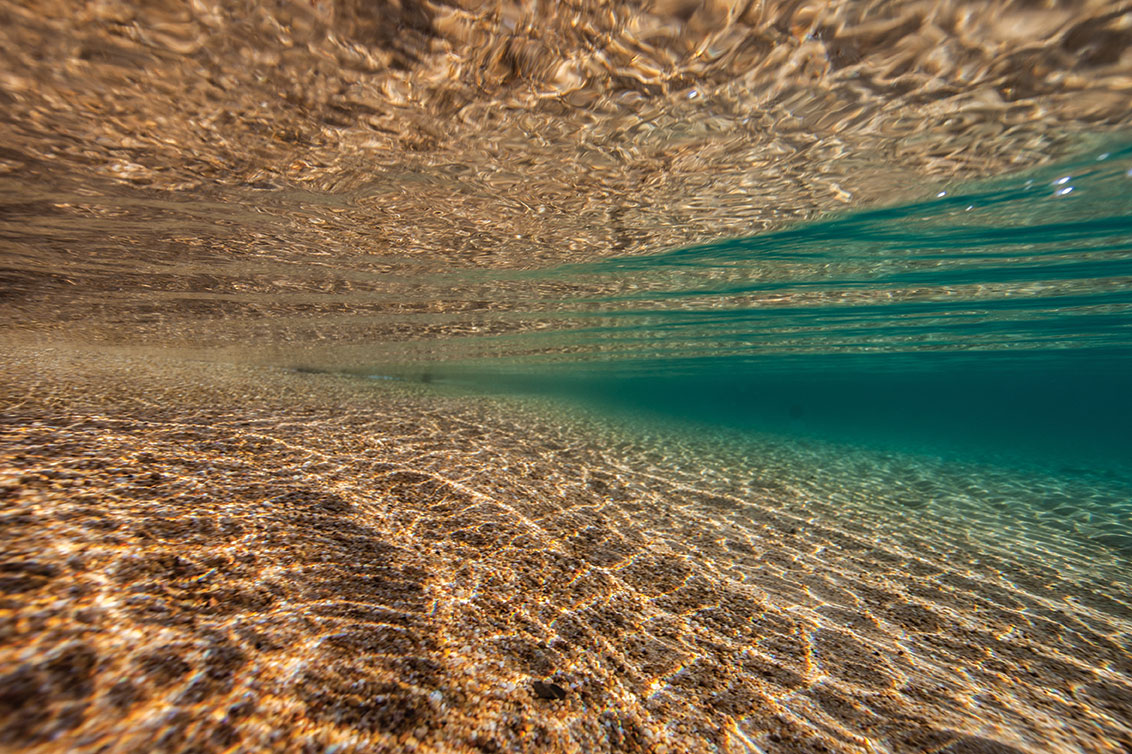 Tahoe’s famed clarity on display in the shallows

Most divers use a drysuit for the majority of the year. In the warmer months, some switch to a seven-millimeter wetsuit. Diving in the Sierra in the winter takes a special kind of crazy, says Chestnut.

“It certainly gets your attention when you come out after a dive and the water is freezing on the outside of your gear before you can even walk to your car,” he laughs. “You look at yourself and say, ‘What am I doing?’”

The altitude poses another challenge, though not quite as straightforward as the cold. Because the atmospheric pressure is lower than at sea level, divers must calculate the time needed to decompress differently. Lake Tahoe’s altitude makes only a small difference in the calculations for recreational divers who do not go deeper than 100 feet. Those who stay down longer and go deeper must carefully factor the altitude into their planning.

“It doesn’t necessarily make it more difficult, but it does change the way divers plan their dive to stay within safe limits,” Chestnut says. “As long as they’ve been trained in it, it’s as safe as anywhere else in the world.”

Today, much of the diving happening in Lake Tahoe is not for recreation. Many hours are spent underwater studying the environment. In addition, divers are actively engaged in solving some of Tahoe’s aquatic problems.

Divers contracted by Tahoe Resource Conservation District (TRCD) have covered beds of milfoil and Asian clams along the shoreline with large black mats to kill them off and prevent further growth. The projects have been successful in Emerald Bay, and scuba diving is the only way to do it.

“If you get any deeper than 1 or 2 feet, you really have to get a diver in there,” says Nicole Cartwright, aquatic invasive species program coordinator for TRCD. 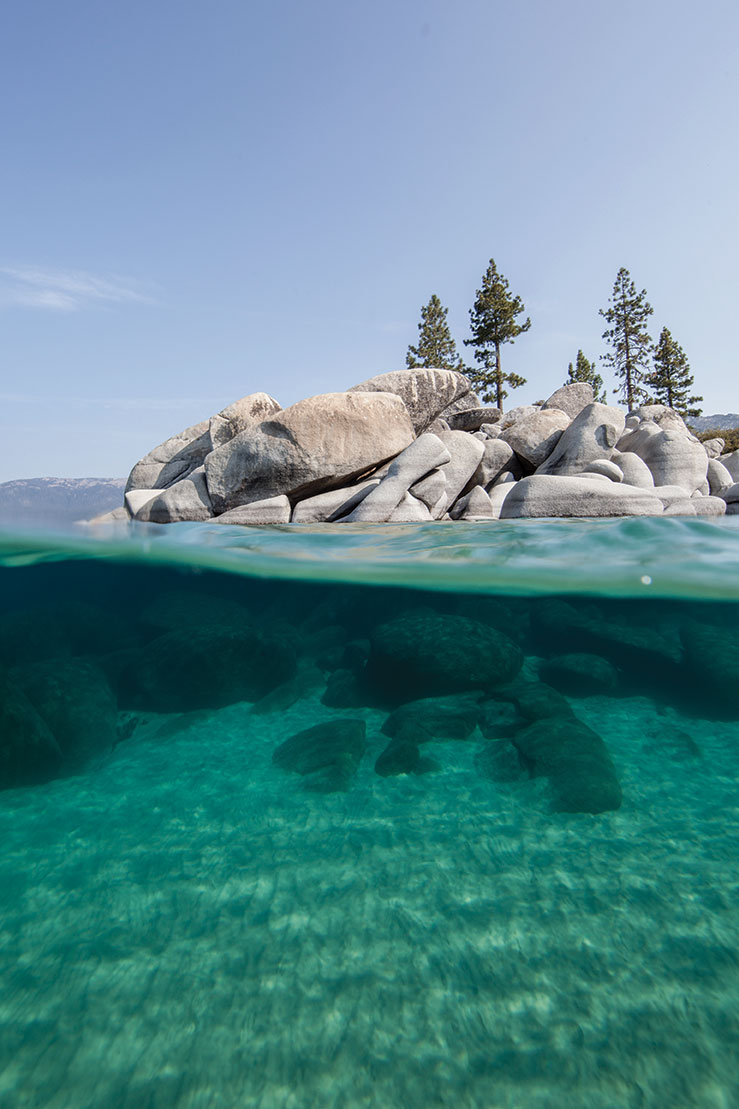 Divers also marked another underwater first last year. A team of researchers circumnavigated The Lake, documenting changes in the nearshore environment. The plants, animals and the amount of trash they found gave scientists pause.

“It looks like the clarity is beginning to stabilize, but the bottom of The Lake continues to change at a dramatic rate,” Sudeep Chandra, a limnologist at University of Nevada, Reno, told the Reno Gazette-Journal after viewing the team’s findings.

As I float on the surface, a few lingering bubbles jump from my regulator. I stick my head under and peer down into the blue. It’s no wonder that The Lake’s underwater world has inspired some of the area’s greatest folklore. The water itself is alluring in an almost unbelievable way and the depths only invite speculation.

Whether it’s Tessie, mermaids or bodies, we cannot ever be sure of what hides in the deepest, darkest parts of Tahoe, mostly because we do not want to be. In referring to man’s obsession with watery fables, Cousteau once wrote, “Doubt leaves room for interpretation.” 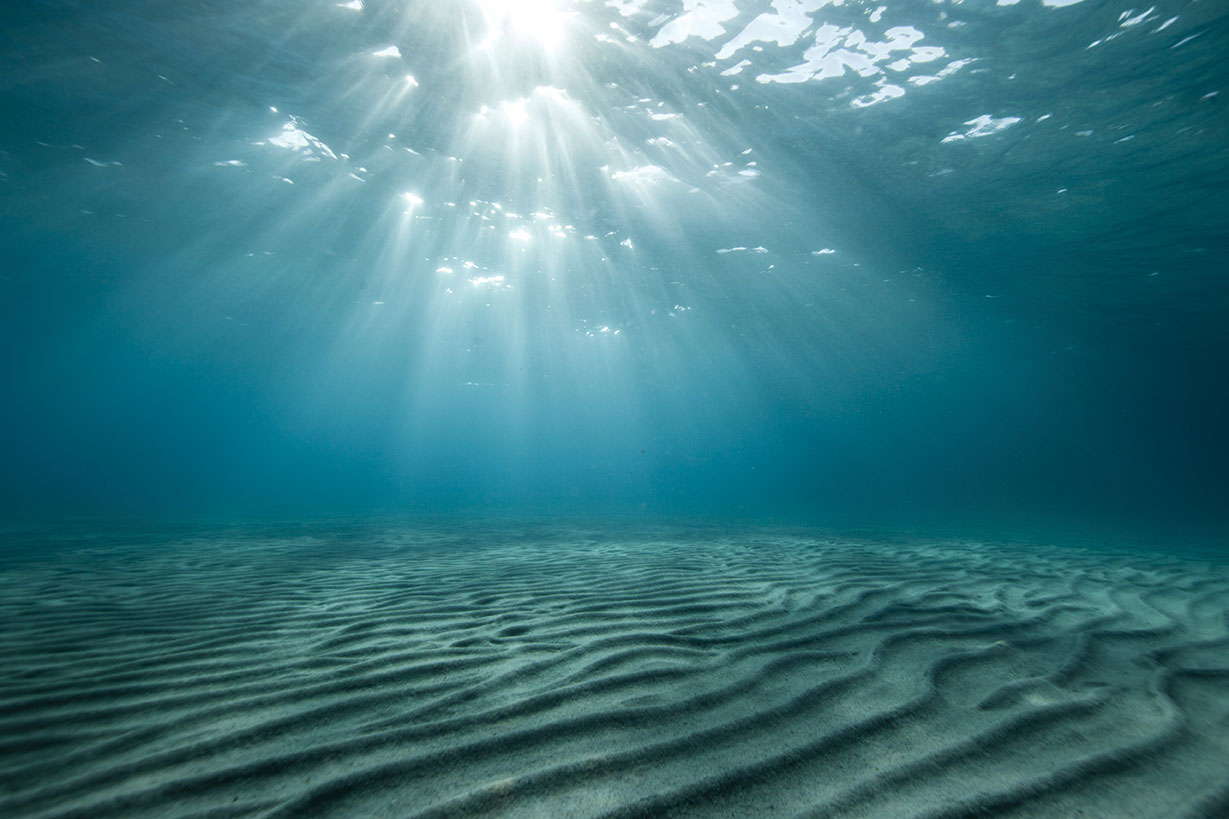 Truer words could not be spoken about Lake Tahoe’s perfect blue underwater world. Those who dive The Lake are those who can’t resist the mystery of the depths and the infinitely small chance that they’ll bump into the stuff of legends. However uncomfortable that process may be, it’s the only way to come face to face with the sea monsters we secretly believe are down there. So, is Tessie real?

I check my air tank: 1,500 pounds per square inch. The bubbles rise again and I sink to the bottom. I look around, on all sides: nothing but blue and the strange tales swimming in my head.

Dylan Silver is a South Lake Tahoe–based writer and photographer. Find more of his work here.