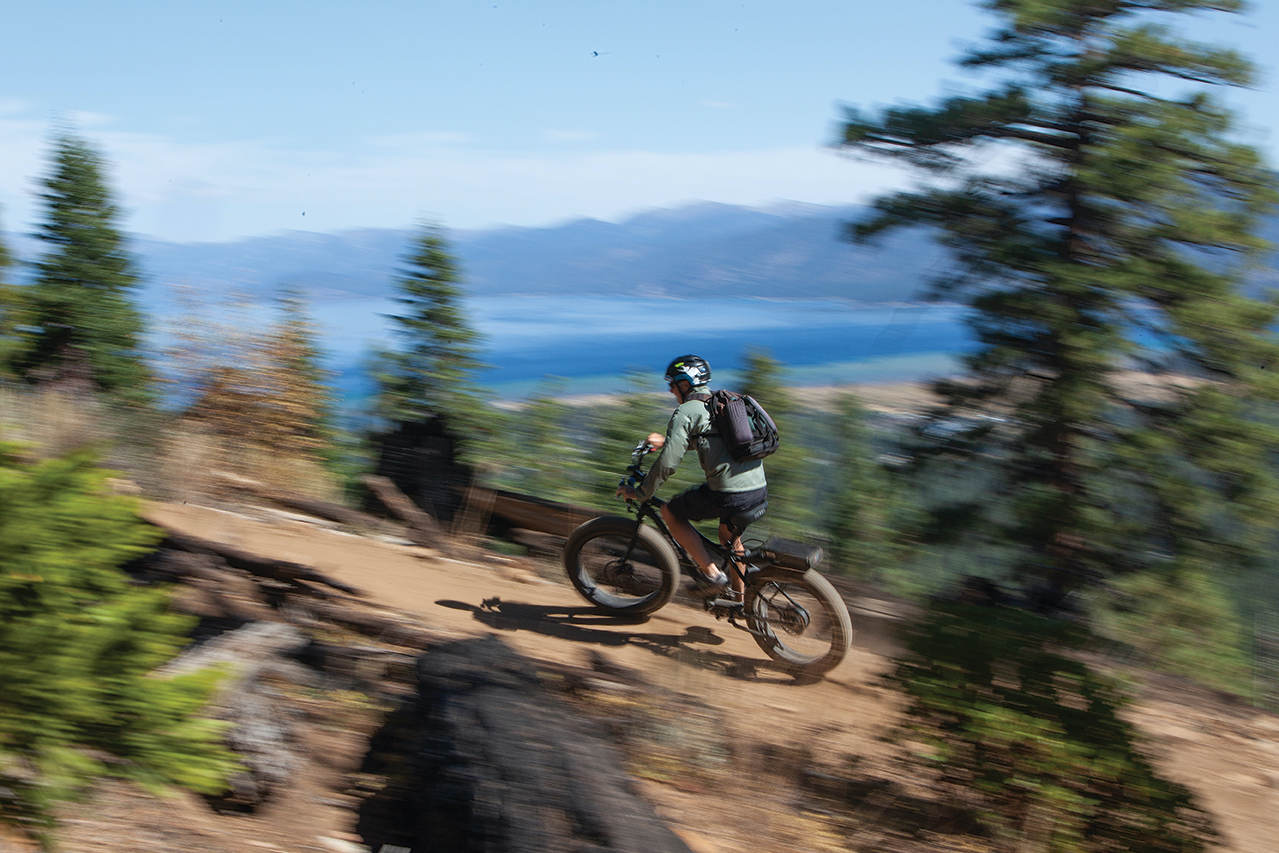 Mountain bikers in the Tahoe area are split about whether to allow Class 1 e-bikes on local trails, photo by Dylan Silver

The debate was heated, with both sides of the argument presenting their case with fervent conviction. The point of contention: Should electric bikes be allowed on trails in the Tahoe Basin, the same as their non-motorized counterparts?

While the proposal addresses numerous improvements and additions to Tahoe’s trail system, “e-bike” access dominated the conversation— specifically, the plan to open 87 miles of existing trails in the Tahoe Basin to Class 1 e-bikes (and about 120 miles total when considering proposed new trails).

“E-bikes are really gaining in popularity and are pretty polarizing,” says Jeremy Benson, an avid Truckee-based mountain biker and author of the guidebook Mountain Bike Tahoe. “There are people who love them and ride them all the time, people who are ambivalent, and then there are people who absolutely loathe them.

“It is interesting to see the evolution of mountain biking. It may take a while to get it sorted out and all of us on the same page.”

E-bikes have become a major component of bike sales, and they are already being happily ridden on area trails despite not being authorized to do so. But they also face stern opposition from many traditional mountain bikers.

Jacob Quinn, LTBMU’s trail program manager, says he has received a flood of feedback both for and against the e-bike proposal, which remains under review, with an expected decision in early 2022.

“Quite a few comments are opposed to all e-bikes. Some want e-bikes everywhere,” says Quinn. “We are trying to design a trail system that provides a variety of quality experiences. We need every level and the whole spectrum, so that users will have an awesome menu of options.”

In addition to providing access for e-bikes, the Forest Service proposal includes 28 miles of new trail, mostly on the West Shore to create needed non-wilderness connections, as well as three new trailheads.

“E-bikes is one big part of the proposal, but it’s also about over-used facilities, not enough trash removal and a shortage of parking,” says Quinn. 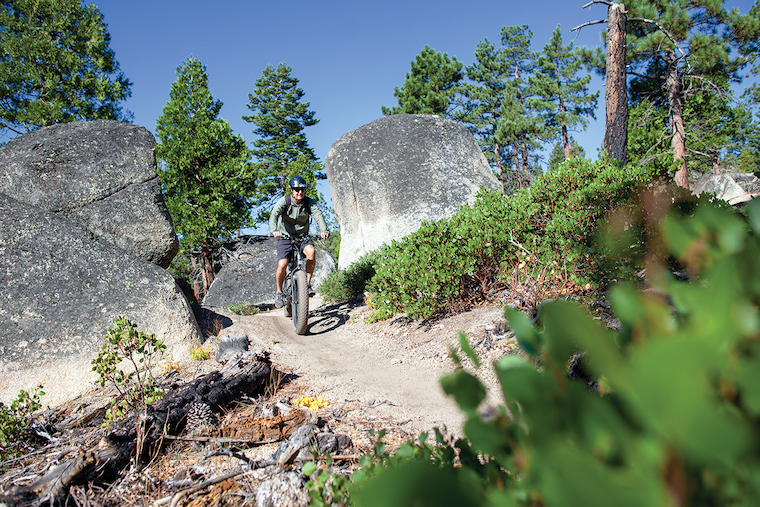 A rider on a Class 1 e-bike near South Lake Tahoe, photo by Dylan Silver

E-bikes are classified into three categories: Class 1 e-bikes provide assistance up to 20 miles per hour when the rider is pedaling, Class 2 have motors that can work even when not pedaling and Class 3 are also pedal-assisted but have a higher top speed of 28 miles per hour.

Class 1 bikes are the only type being considered for use on Tahoe’s dirt trails. 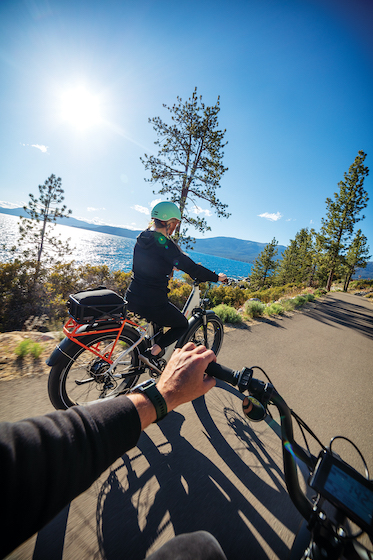 With throttle-assisted motors that propel the bicycle up to 20 miles per hour, Class 2 e-bikes are increasingly common on paved paths around Tahoe, including the Tahoe East Shore Trail (pictured). The Forest Service proposal to allow e-bikes on select dirt trails does not include Class 2 or Class 3 bikes, photo by Jeff Colhoun

Those on the opposing side of the proposal argue that e-bikes make trails significantly easier to climb, providing them the ability to ride much faster up hills than even ultra-fit mountain bikers.

“That leads to occasional uphill-downhill encounters that are unexpected—and trails that people generally only ride downhill, now e-bikers can climb up,” says Benson, adding that the pedal assistance also leads some e-bike riders to get in over their heads on technical terrain that they would not otherwise be able to access.

On the positive side, however, “I know of a few people who have disabilities from injuries who can ride because of e-bikes,” says Benson. “They can get out and ride with friends and their kids when otherwise they would not be able to ride.”

Jeff Thompson is among this group.

Now in his early 60s, Thompson grew up in Tahoe City and for years enjoyed riding his mountain bike on local trails. Then in 2018, he suffered a nearly fatal heart attack.

“It left my heart severely damaged,” he says. “I have congestive heart failure. The extent of the damage to my heart made it so I couldn’t ride like I used to.”

His son, who works for Specialized Bicycles, set him up with an e-bike.

Since getting an e-bike, Thompson rides almost every day in the summer. “I ride as far as I used to and further,” he says. “People who don’t like e-bikes don’t have them.”

Regardless of opinion, e-bikes are here to stay and ultimately must be embraced, says John Percy, co-owner of Olympic Bike Shop in Tahoe City. Plus, he adds, when issues arise on trails, “It is not the device that is the issue, but the jerk” who causes the problem.

“E-bikes are something that is a tidal wave at this point,” says Percy. “While not an e-biker myself, I have no concern about Class 1 bikes being out on the trail.” 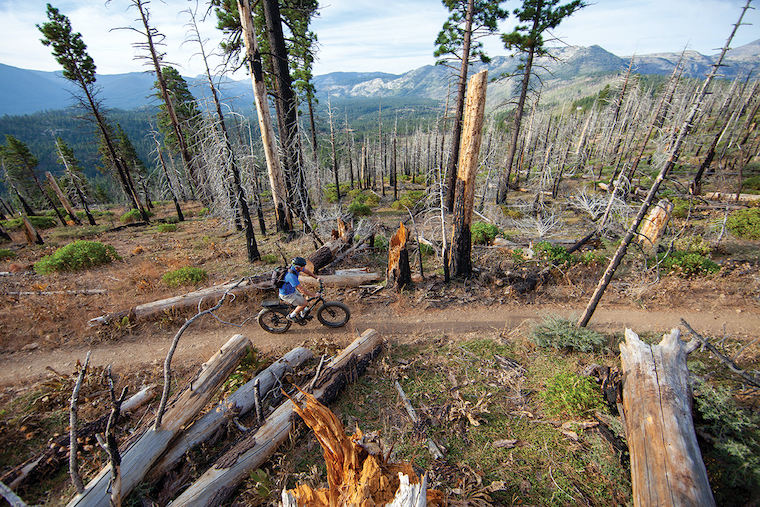 While they make for a hot topic, e-bikes are just a small part of the overall explosion of trail use in the Tahoe Basin in recent years.

“We saw a huge increase every year for the last decade in all user groups,” says Quinn. “Hikers, trail runners and bikers are seeing a somewhat equal increase.”

Land managers are more concerned with the increased amounts of litter, and a lack of understanding of Leave No Trace principles. Quinn hopes that once a Basin Wide Trail Plan is instituted, the Forest Service can put up new signage with a focus on educating the public on how to take care of our precious wilderness—and, perhaps something about how to safely operate an e-bike.

Like the Forest Service, the Tahoe Area Mountain Biking Association (TAMBA) found a similar split in opinions toward e-bikes in a survey conducted in the fall of 2020.

Patrick Parsel, TAMBA’s trails director, says the organization supports the proposed project on all fronts, including e-bike access. He compliments its “balanced approach” by opening most lower-elevation trails to e-bikes, especially those frequently used to commute around towns or connect with existing motorized-use trails.

However, under the proposal, the Tahoe Rim Trail and trails that access Desolation Wilderness will remain off-limits to e-bikes. The Pope Baldwin Bike Path on the South Shore, which is the most heavily used trail in the Tahoe Basin, will also remain closed.

“E-bike access is just one component of the project, with the proposed trail development and increased connectivity making up a majority of the project, and that is what we are most excited about,” says Parsel. “There is a lack of multi-use recreation opportunities on the West Shore, and this project will provide us the chance to push towards making a bikeable trail around the lake.

“We saw our trail network get pushed to its limits last summer and our hope with this proposal is by bringing on more trails into the network, we can help spread users out and provide for a broader variety of trail experiences around the lake.”

Tim Hauserman spends a lot of time on both road and mountain bikes. A friend recently offered him his first chance to ride an e-bike on the trail. He refused on financial grounds, fearing that he might like it and have to buy one.