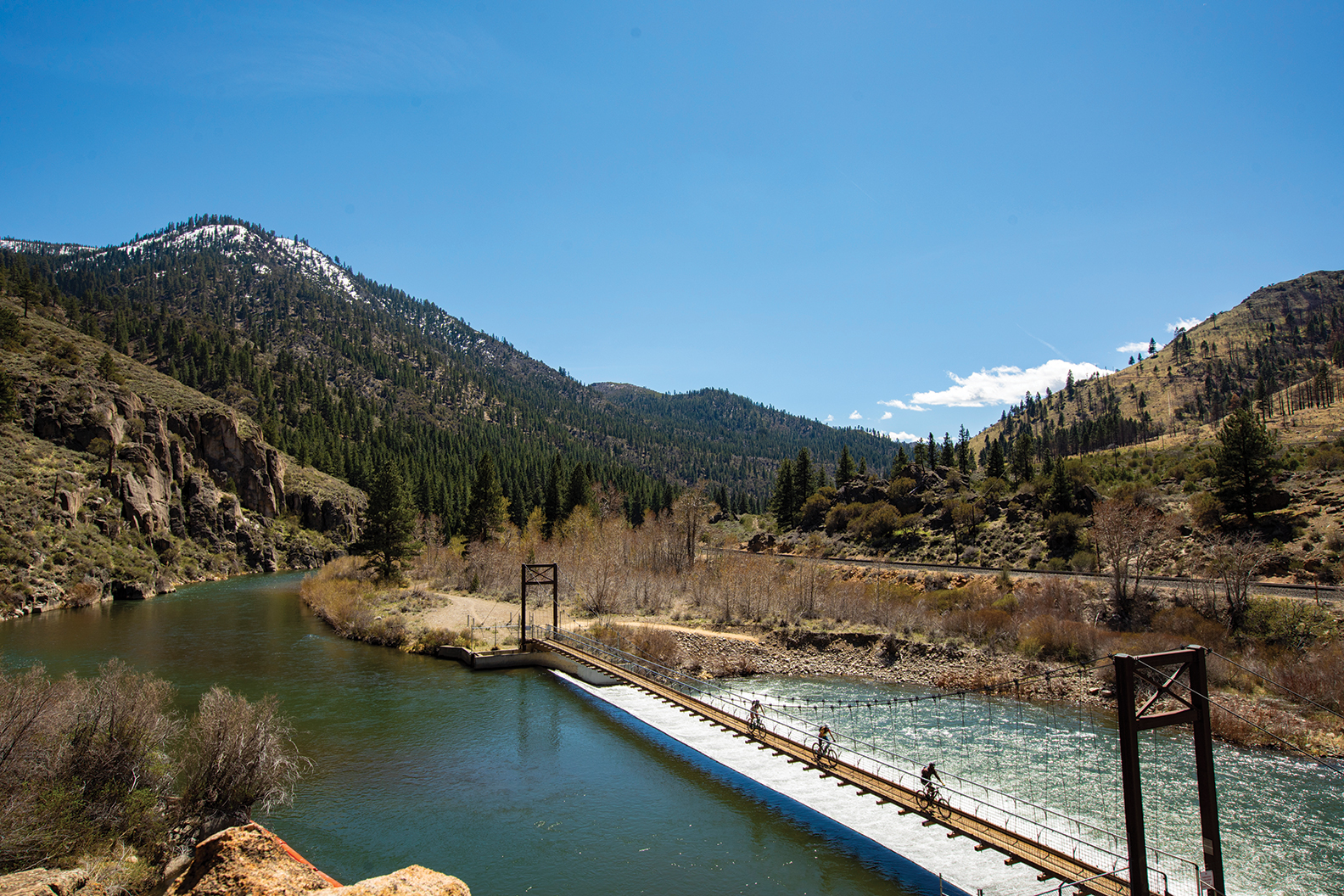 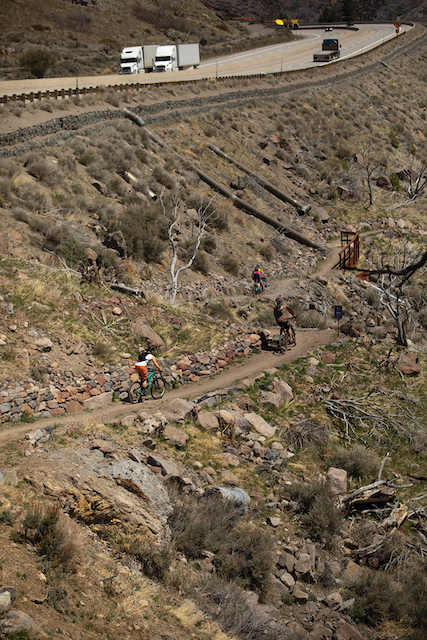 There was a chill in the air as I strapped on a raggedy old pair of bike gloves, zipped up my puffy and secured my earbuds on a clear spring morning. Mounting my ride, I turned on the power and pedaled down my quiet street.

The sun hadn’t had a chance to warm me up, but that may have been a blessing given the forecasted heat to come. My plan was to ride from my house in Carnelian Bay to Reno on the newly completed section of the Tahoe-Pyramid Trail.

A Long Road to Completion

For Janet Phillips, president of the Tahoe-Pyramid Trail, there’s nothing quite like seeing a goal 17 years in the making come to fruition.

“All the people who drive the I-80 corridor hundreds of times in their lives never really get to see the river. Now they are getting to see it,” says Phillips, who thought up the idea for the route in 2001, the same year she retired as director of water policy and planning for Sierra Pacific Power Co. (now NV Energy).

Upon announcing her concept for the trail two years later, Phillips quickly gained support. Less than two months later she had raised more than $30,000 in donations and formed a nonprofit group of some 40 volunteers, who contributed engineering, construction, permitting and legal expertise to the project.

“I have a passion for the river,” Phillips told the Reno-Gazette Journal at the time. “I know many of the players along the river and I want to see a trail from Tahoe to Pyramid.” 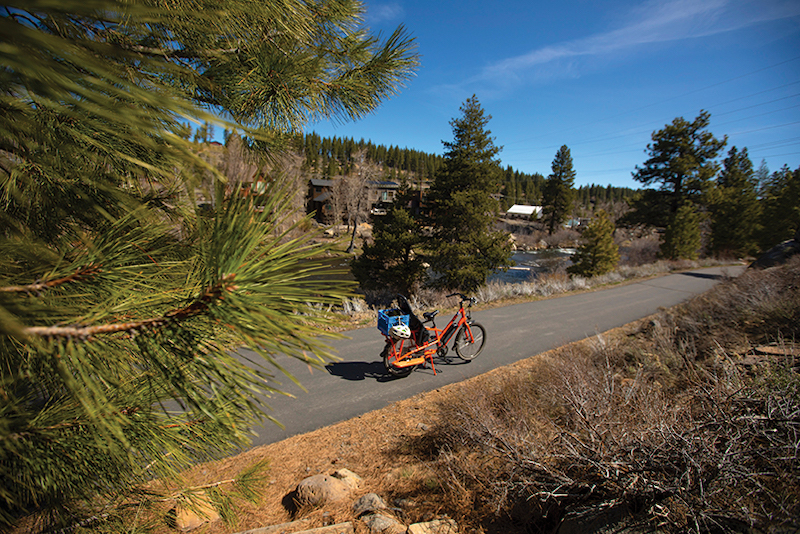 The author takes a snack break on the Truckee River Legacy Trail, one of the many subsections of the Tahoe-Pyramid Trail

With time and gear on my side, I decided to divide the ride into two sections.

From Carnelian Bay to Hirschdale, the Tahoe-Pyramid Trail involves a leisurely cruise on asphalt. I rode a Radwagon e-bike into Tahoe City, then followed the Truckee River Bike Trail to the Squaw Valley turnoff. Riding alone, I took in the crisp morning air while riding to the sounds of chirping birds and flowing water, accompanied by the occasional whir of passing cars. I continued in the bike lane along Highway 89 north to West River Street in Truckee.

From there the route links up with the paved, 6-mile Truckee River Legacy Trail toward Glenshire. Leaving the 10 miles of road riding behind, it felt nice to be back on a pedestrian passageway. Passing walkers, riders and rollerbladers, my mind floated away into the music, only to be brought back to reality by the occasional familiar face.

Twenty-eight miles into the ride I met up with my crew, Ashli Lewis, Amie Engerbretson and Todd Ligare, in a dirt parking area off Hirschdale Road. My plan to have my mountain bike delivered worked perfectly. I changed clothes, reassembled my gear and prepared for phase two. 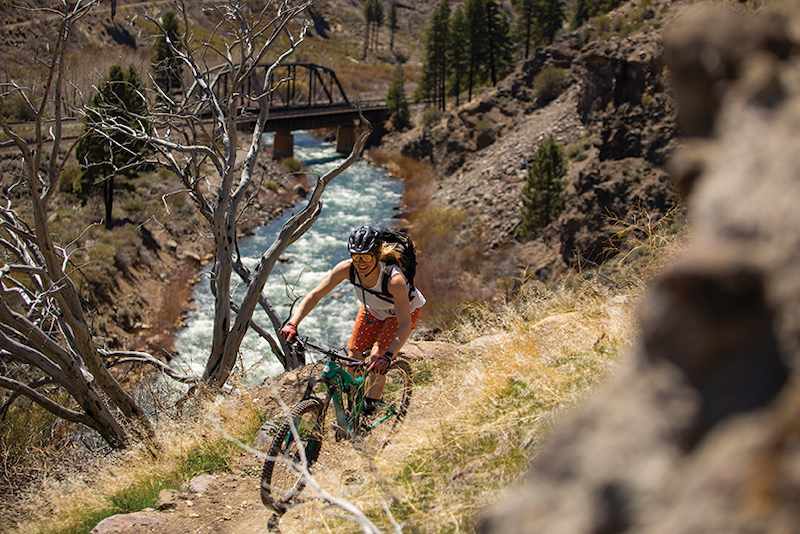 Bumps in the Trail

Phillips admits that her objective in creating the Tahoe-Pyramid Trail was twofold.

First, she wanted to provide the public with the opportunity to slow down and enjoy the entire length of the Truckee River, as opposed to speeding past at freeway speed. The second reason was more personal: Phillips hoped to complete the project while she was still physically fit enough to enjoy it.

Achieving such an ambitious dream—connecting two lakes while spanning two states, five counties and four cities—has not been easy. It also remains a work in progress, as two sections of trail east of Reno have yet to be completed.

“On the California side we were lucky. The landowners like Caltrans and two utilities were very cooperative,” says Phillips. Deeper into Nevada, however, “We have been dealing with many miles, many private landowners, the railroad and many challenges going east of Sparks,” Phillips adds. “The landscape is different, but some of the issues are the same—a narrow river corridor with lots of obstacles.” 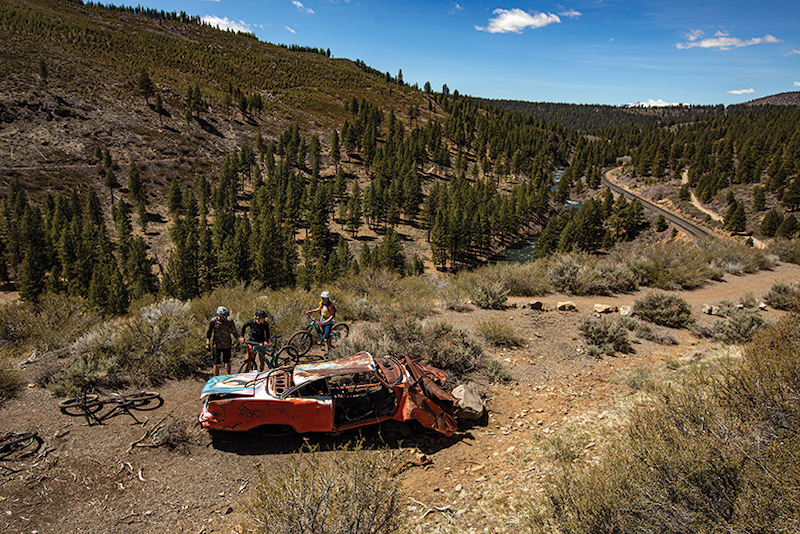 Exploring a dilapidated car along the Tahoe-Pyramid Trail

Swapping bikes mid-mission was a unique experience. It made the ride feel like a true adventure as we rode toward the start of the first singletrack section of trail.

The pine forests morphed into desert as we descended into the Truckee River Canyon toward Verdi. Views of the turbulent river below extended to the horizon, accompanied by railroad bridges and peaks. 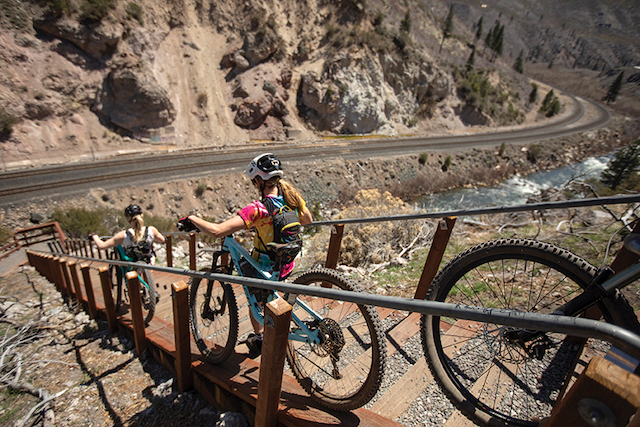 After thinking about riding a stair section, Ashli Lewis and Amie Engerbretson make the smart decision

Riding just beneath Interstate 80, we zipped through turns and straightaways as our focus turned to life in the canyon—sagebrush, skeletons of trees and the occasional wildflower lining the path. We tripped around a couple of abandoned old cars as a Union Pacific train rattled down the tracks in the canyon below.

While initially intended for bikes (the route was known as the Tahoe-Pyramid Bikeway until 2018), the Tahoe-Pyramid Trail is truly designed for a wide range of users, which we witnessed in the array of hikers, bikers, fisherman and picnickers we passed along the way.

The sun rose high in the sky as the rubber of our tires reverberated along the gravel route. Although steadily dropping in elevation, we discovered that the trail includes its share of hot, strenuous climbs, as well as a series of walk-a-bike step sections.

Past Floriston, we traveled along 2 miles of dirt road before reconnecting with singletrack and crossing the picturesque Fleish Dam suspension bridge. Crossing the state line, we continued along a series of utility roads and historic slices of Old Highway 40 as the river canyon petered out into the high desert of the Truckee Meadows.

Amie and Todd concluded their ride at a park in Verdi, where we all drank a cold one before Ashli and I continued along the road toward Reno. 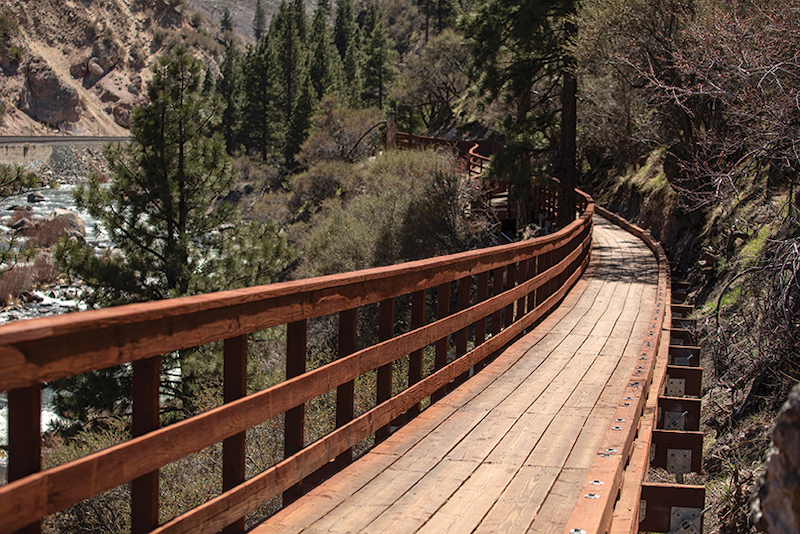 On October 5, 2019, Phillips and team hosted a ribbon-cutting event in Floriston to celebrate the completion of the Tahoe-to-Reno portion of trail.

The event also commemorated the final and most difficult stretch to build—a 2-mile swath west of Floriston cut into a steep hillside beneath the curve of a busy interstate, complete with a 600-foot elevated boardwalk made of steel and wood. Built by Richard May Construction out of Mammoth Lakes, the labor-intensive section was made possible by a $2 million grant from the Federal Highway Administration. 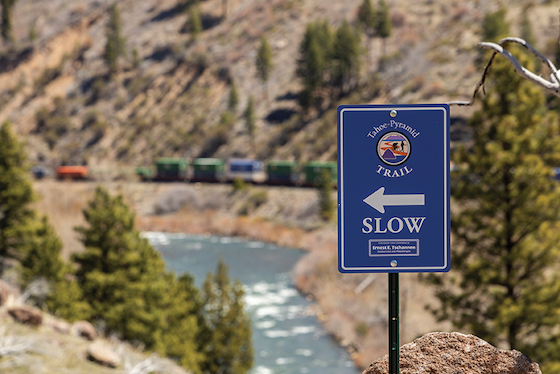 The feat marks only one of many problem-solving hurdles that Phillips and her volunteers have overcome as they continue to chip away, one section at a time, at linking the entire route.

Among the critical achievements to date, the Truckee Meadows Water Authority agreed to open its maintenance road near Verdi if the Tahoe Pyramid Bikeway group helped pay for the Fleish pedestrian bridge to be rebuilt. The bridge project was completed in 2013 and is now one of the highlights of the trail.

The Tahoe-Pyramid Trail gained access to another critical bridge the following year when the Nevada Country Board of Supervisors voted to save a historic concrete bridge over the Truckee River near Hirschdale, which would have otherwise been demolished.

Such efforts and victories have not gone unnoticed. The Tahoe-Pyramid Trail has received numerous awards in recent years, including EDAWN’s 2018 President’s Award, while Phillips was named the Reno-Gazette Journal’s 2019 Citizen of the Year.

Although the trail continued on, my ride from Carnelian Bay ended 50 miles later at Mayberry Park in perfect springtime conditions.

Until recently, I had never considered riding a bike from my house to Reno. But I’m glad I did. Aside from the seldom-seen views and engineering feats, what made the Tahoe-Pyramid Trail experience unique was the wide variety of trails connecting the Tahoe Basin to Reno.

While ridable most of the year (depending on snow), I recommend exploring the Tahoe-Pyramid Trail in spring or fall for more comfortable temperatures. Given our current pandemic, it is important to consider using the trail in mornings or evenings to reduce overcrowding.

As always, pack out your trash. And before leaving the trail, give a nod to a hard-earned accomplishment that’s been a long time in the making.

Ryan Salm is a Tahoe-based photographer and writer who is always down for a good adventure.

For more information about the Tahoe-Pyramid Trail, go to www.tahoepyramidtrail.org. Along with interactive maps of each section, the site provides up-to-date information on trail maintenance, possible closures, tips, blog posts and more.