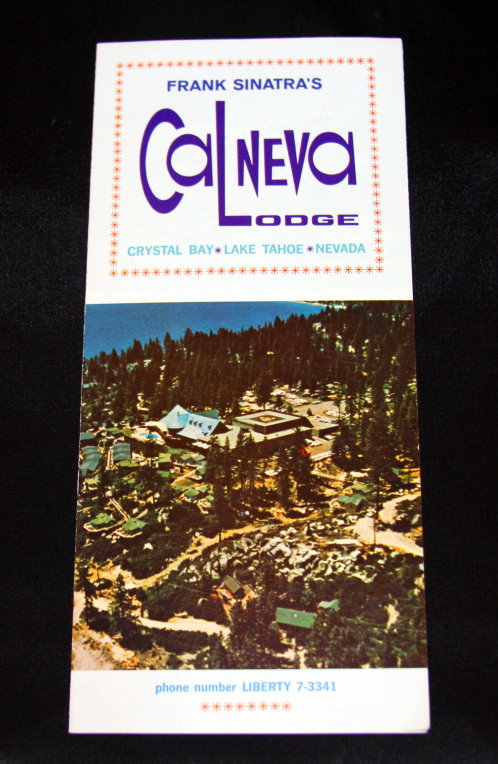 His Way: Sinatra at Tahoe

The Cal Neva Lodge and Casino fell on hard times during the Great Recession. Its previous owners struggled with the sluggish economy and incursions from Native American casinos on its revenue stream. The casino shuttered last September as its new owners renovate the aged property.

Today, the tall ivory tower situated in the center of the North Shore of Lake Tahoe, straddling the Nevada/California border, little resembles the hub of activity it was in the full glory of its golden yesteryear.

The 6,000 square foot, 219-room, 10-story hotel built in 1926 still has a commanding presence above Lake Tahoe’s blue waters. It historically functioned as a fulcrum of a hedonistic lifestyle enjoyed by the era’s most illustrious personalities: Joseph Kennedy brought his wife and two of his sons, Jack and Robert, to the exclusive celebrity haunt beginning in the early 1950s and Marilyn Monroe spent her last week at the casino and lodge before dying at her home in Brentwood, California, in August 1962.

At the time of Monroe’s sojourn, Frank Sinatra, the legendary crooner, an icon of mid-century America and one of the best-selling musical artists of all time, owned the Cal Neva.

After achieving early success in the 1940s, Sinatra struggled through career difficulties in the early 1950s only to achieve a resounding redemption after garnering an Academy Award for his depiction of a U.S. Army private in 1953’s From Here to Eternity.

Thus, the man nicknamed Ol’ Blue Eyes and Chairman of the Board was well ensconced in popular lore by the time he purchased Cal Neva in 1960.

Sinatra was no stranger to Nevada casinos. They served as a preferred venue for the famed “Rat Pack,” including Dean Martin and Sammy Davis, Jr. While the group mostly performed in Las Vegas, Sinatra’s purchase of the Cal Neva catapulted the North Shore of Lake Tahoe further into the pantheon of destinations for the rich and famous.

During Sinatra’s reign, the casino attracted a cavalcade of stars including Marilyn Monroe, Joe DiMaggio, Clara Bow, Will Rogers and the McGuire Sisters.

The casino also hosted President John F. Kennedy, with whom Sinatra had struck a strong friendship during the former’s campaign for the highest office in the land (Kennedy used Sinatra’s song High Hopes as an important part of his march toward the Oval Office).

While Sinatra loved to rub elbows with the well-heeled socialites, the best entertainers and the most powerful of politicians, he also displayed a penchant for hanging out with mobsters.

Sinatra’s history with the mob dated back to 1947, when he travelled to Havana, Cuba, as a guest of Joe “Fish” Fischetti and his brother Rocco, members of Al Capone’s Chicago gang. In Cuba, Sinatra consorted with Lucky Luciano, the father of the modern Mafia. The pair of Italian-Americans attended one of the largest meetings of top Mafiosos.

It was then that Sinatra attracted the notice of J. Edgar Hoover and his G-Men, who would continue to monitor the crooner to the extent that journalist Pete Hamill once remarked that Ol’ Blue Eyes was “the most investigated American performer since John Wilkes Booth.”

Such was his connection to the criminal underworld that many historians and journalists believe Sinatra operated the Cal Neva as a front for Sam Giancana, who, in the 1960s, was the Mafia boss for all of Chicago.

The story goes that Sinatra’s ownership allowed the notorious mobster to pull revenue from the wildly profitable casino despite his status as persona non grata in the state of Nevada. The mobster reportedly also gave Sinatra a loan of a million-plus dollars to refurbish the casino and lodge.

The Nevada Gaming Commission kept a little black book naming 11 men—including Giancana—who were not allowed to step inside any Silver State casinos. Casino owners who willingly permitted any of these men on their premises risked losing their license.

However, Sinatra had found ways to surreptitiously host his mobster associate and friend, surrounding the Mafia don in luxury and shielding him from the increasing vigilance of the G-men roaming the halls of all the grand casinos. Giancana reportedly enjoyed the arrangement to the point where he was a frequent visitor despite Nevada’s prohibitions.

On a cool July night in Lake Tahoe in 1963, Giancana was visiting his long-time lover Phyllis McGuire, a singer in one of the nation’s most popular musical acts.

The McGuire Sisters have largely been forgotten, but at the beginning of the 1960s the three sisters—Dorothy, Christine and Phyllis—were an extremely prominent pop group with a litany of performances under their belts.

At some point, Giancana became embroiled in a verbal argument with Phyllis McGuire’s manager, Victor Collins, and the discussion grew so heated that words turned to fisticuffs and an all-out brawl ensued.

The melee prompted the attention of some undercover FBI agents, who happened to be in the area and who then subsequently alerted the Nevada Gaming Commission about the presence of a banned mobster in Frank Sinatra’s casino.

The commission launched an investigation into the matter, telling Sinatra it was incumbent upon him to provide evidence to refute claims that he willingly let Giancana into his establishment.

The October 7, 1963, deadline came and went and then a defiant Sinatra further damaged his cause by essentially threatening and insulting Ed Olsen, a veteran Associated Press reporter who was then head of the Gaming Commission.

“Just you try and find me (with a subpoena),” Sinatra told Olsen, according to Nevada Gaming Commission records. “And if you do, you can look for a big, fat surprise.”

Undaunted by vague threats, the Nevada Gaming Commission stripped Sinatra of his gambling license, an essential component for anyone who wanted to own all or a piece of a casino.

The move forced Sinatra to sell his interests in the Cal Neva and his percentage stake in the Sands Hotel, where he performed for as much as $100,000 per week in his heyday.

While Sinatra continued to perform in Nevada and be associated with the glittering and hedonistic lifestyle of gambling casinos, his days as a casino owner were finished—that is, until Harry Reid stepped in.

Senator Harry Reid, from Searchlight, Nevada, born in 1939 to a laundress and a miner, rose to the upper tiers of the Nevada political hierarchy by dint of his understated yet unflinching ambition.

After graduating from George Washington University Law School, Reid rose rapidly through Nevada politics, becoming Lieutenant Governor at the age of 30 and going on to serve as the Head of the Nevada Gaming Commission from 1977 to 1981.

His colorful tenure as the commission boss not only included him choking Jack Gordon, the future husband of La Toya Jackson, for attempting to give him a $12,000 bribe, but also presiding over a hearing to reinstate Sinatra’s gambling license.

In 1980, Reid and the Gaming Commission launched a 13-month investigation into Sinatra’s activities in the early ’60s as the contrite crooner stood before the panel in an attempt to gain the restoration of his gambling license.

The New York Times wrote in 1981 that many of the questions and fact-finding provided by the Reid-led panel during the hearing were “naively superficial” and noted that Sinatra rather incredibly denied ever having known Giancana.

Reid told reporters that eight days prior to the decision he was prepared to vote against Sinatra, but after reading the results of the yearlong investigation said, “I have to be very candid and honest in saying that I was totally wrong.’’

Sinatra had his gaming rights restored at Caesar’s Palace, which would subsequently donate money to Reid’s political campaigns. Furthermore, Sinatra began performing at the Golden Nugget, owned by Steve Wynn, who would go on to contribute a little north of $150,000 to Reid’s various war chests between 1989 and 2005.

FBI agents questioned the relationship between the senator and crooner in public statements following the decision.