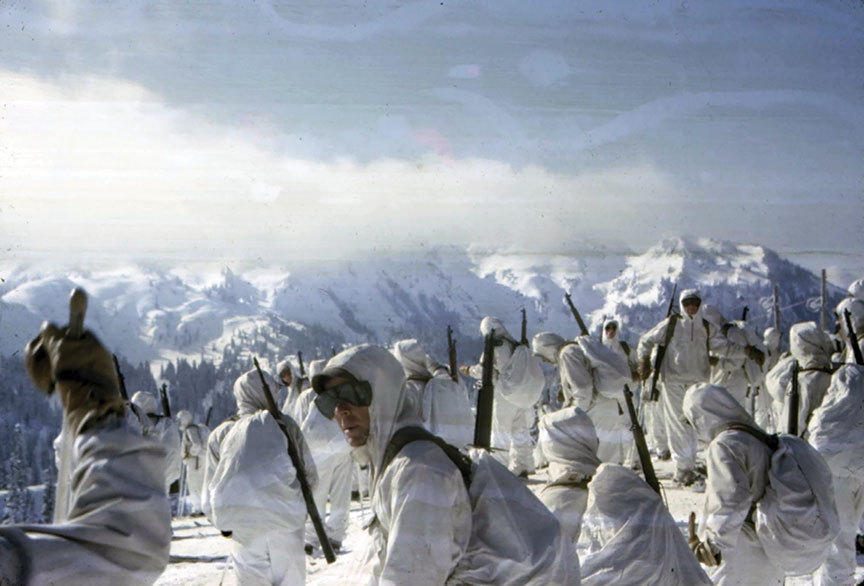 The curious may wonder why this particular stretch of Highway 89, winding through the Truckee River Valley, bears the name of a World War II Army unit.

The 10th Mountain Division, the first alpine fighting force in the United States Armed Forces, bears more than a passing connection to Lake Tahoe. Approximately 15 young men from the Lake Tahoe region served in its ranks. Moreover, many of the soldiers who survived the fierce fighting in Italy during World War II returned to the region to help develop the area’s world-class ski industry.

The Genesis of the 10th Mountain Division 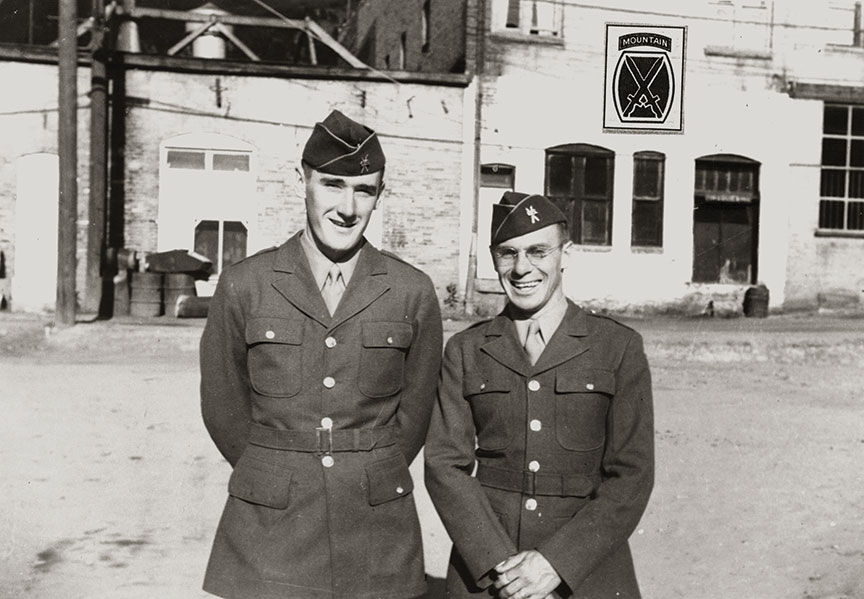 The origins of the 10th Mountain Division can be traced to Finland. In 1939, Russia invaded Finland and, despite boasting superior numbers and artillery, was ultimately repulsed. Several battalions of Finnish soldiers on skis successfully helped defend Finland.

The incident inspired Charles Minot Dole, the founder and president of the National Ski Patrol, to lobby the U.S. War Department to create a similarly outfitted infantry division.

The nascent division attracted young mountaineers and skiers. The fledgling soldiers were deployed to Ft. Lewis, Washington, south of Tacoma. They trained relentlessly in the harsh alpine conditions afforded by the 14,400-foot Mt. Rainier.

By the beginning of 1943, the Army constructed a new garrison, Camp Hale, in Colorado. Situated at 9,200 feet, the frigid temperatures, relentless wind and thin air provided the 16,000-man division the opportunity to acclimate to the harsh conditions they would face in the European theater.

Tahoe and the 10th 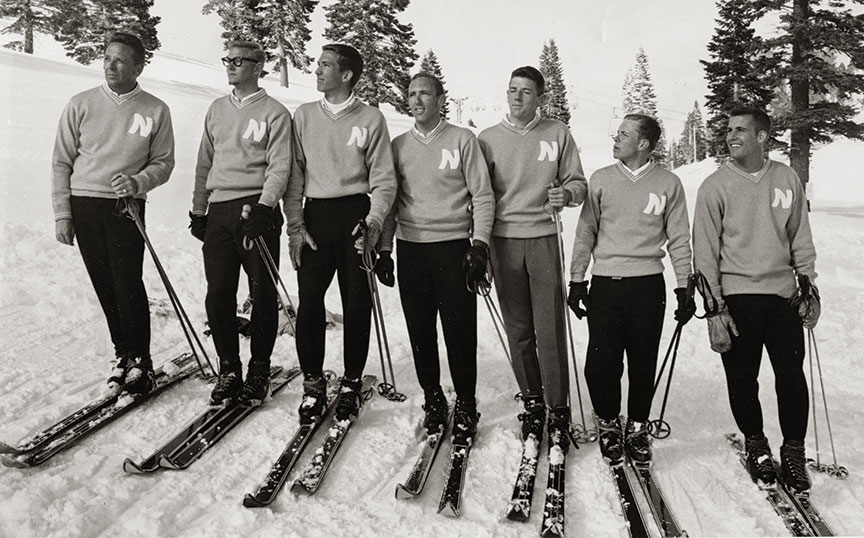 Chelton Leonard was an 18-year-old freshman at the University of Nevada, Reno, who had returned from skiing at Mt. Rose when he learned the Japanese bombed Pearl Harbor.

Barnes Berry, another 18-year-old, a friend of Leonard and son of the famed ski journalist Bill Berry, was taking his turns on the same hill. Two years later, the pair would be huddled high up in the Rocky Mountains preparing for war.

Leonard’s proficiency as a skier convinced the Army to enlist him as an instructor at Camp Hale.

Despite the war intensifying for much of 1943 and 1944, the 10th Mountain Division kept training in Colorado, waiting for an assignment that would likely take them to the front.

The Italian Campaign, the Unheralded Front 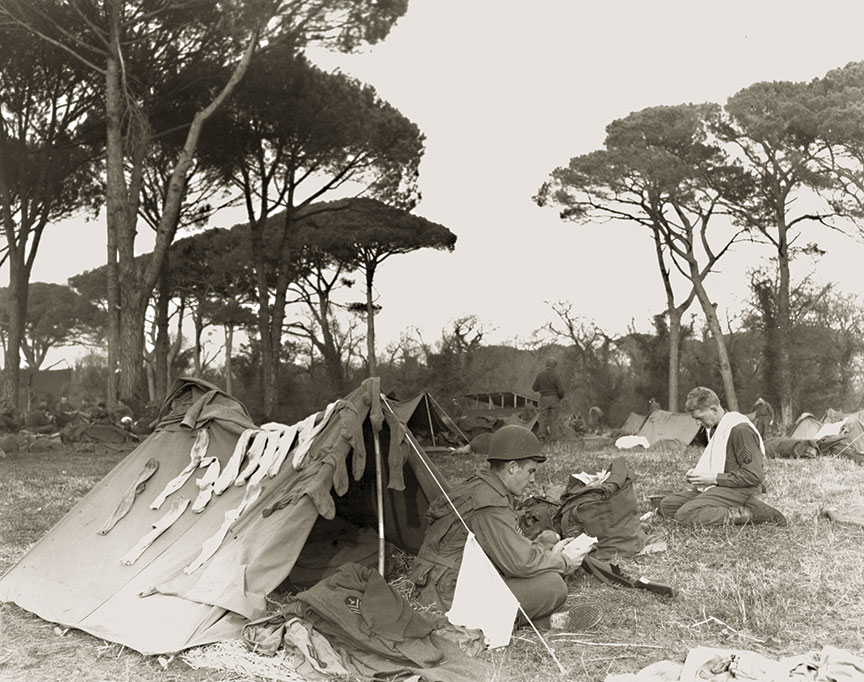 Troops camping near Riva Ridge, where the 10th Mountain Division would carry out one of the most important
battles in the European theater, photo courtesy Donner Summit Historical Society

Hardly an American alive today is unaware of the invasion of Normandy, alternately known as Operation Overlord or D-Day. The largest amphibious invasion in world history has been recounted in countless history books and dramatized in Steven Spielberg’s landmark film, Saving Private Ryan.

While much of World War II lore is dedicated to the western front, the effort to attack the German’s southern flank through Italy was just as fiercely contested, and while the advancements made were less strategically valuable, the cost in American lives was severe. While President Franklin D. Roosevelt was unsure of the utility in attacking Germany from the south, Winston Churchill insisted on the campaign, calling Italy the “soft underbelly of the Axis.”

Allied forces, under the command of U.S. General Dwight Eisenhower and British General Sir Harold Alexander, invaded the island of Sicily in July 1943, nearly a year prior to D-Day.

U.S. General Mark Clark took Rome on June 2, only two days before U.S. troops came ashore at Normandy. The glory garnered from the achievement would soon erode, as Clark was consistently beaten back by the defensive lines Germany built across Northern Italy in precipitous mountain terrain. Clark would later call the supposed soft underbelly of the Axis “one tough gut.” 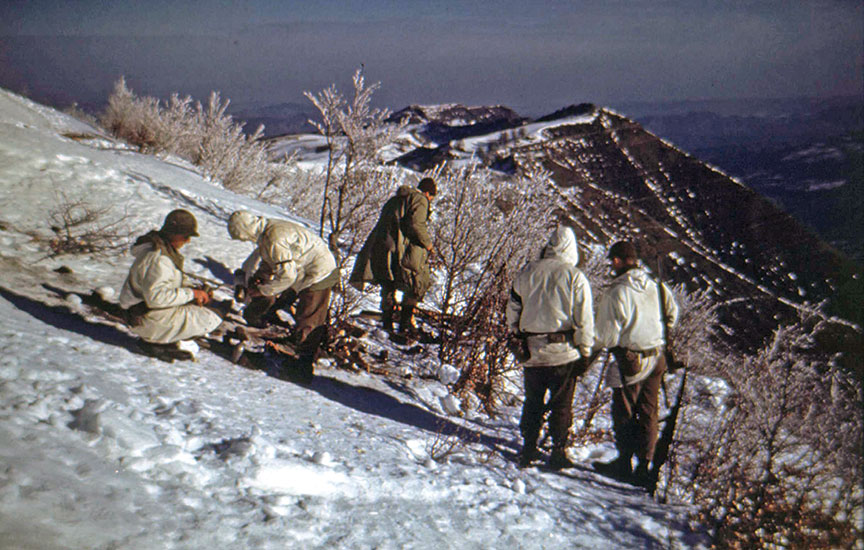 In December 1944, as the 10th Mountain Division was decamping stateside and setting sail for Italy, the German infantry, under the command of Albert Kesselring, had firmly entrenched in and along the high ground and ridges surrounding Mt. Belvedere.

Deemed the Gothic Line, some in the Allied camp felt the German position along Mt. Belvedere, which could easily spot the advances of the enemy and fire upon them, was impregnable. The Germans had easily warded off two earlier attacks by U.S. infantry forces by covering the flat approaches with mines and manning machine gun pillboxes, large artillery platforms and lookouts.

U.S. General George P. Hays, determined to break the Gothic Line, devised a plan to use the mountaineering skills of the newly arrived soldiers and the cover of night.

He knew he had to first capture the heavy artillery guns positioned on a steep escarpment astride the Mt. Belvedere massif called Riva Ridge.

The 10th Mountain Division donned their skis to run reconnaissance missions, sussing out the precise positions of German soldiers while engaging in a few isolated firefights with Germans hunkered in winter foxholes.

Just past midnight on February 19, three companies began to ascend the steep precipice, using ropes and rock climbing techniques acquired at Camp Hale in Colorado and refined at Seneca Rocks in West Virginia.

The men hauled heavy machine guns, ammunition and artillery up the steep embankments, avoiding the minefields in the flat land while preparing for a dawn assault.

As soon as the sun rose at 7:30 a.m., the 10th attacked, spraying unsuspecting Germans with machine gunfire, clearing out foxholes with grenades and moving with surprisingly little resistance. By the afternoon, the companies secured Riva Ridge completely, suffering only 17 casualties.

However, the sense of triumph faded as the rest of the division prepared for the much more complex and difficult assault on the Mt. Belvedere massif itself, where a throng of infantry was situated.

As anticipated, the ensuing fight was extremely bloody—desperation rendered the German fighters fierce as they exacted a steep toll on the advancing infantry.

Nevertheless, by February 24, the 10th Mountain Division captured Mt. Belvedere, a feat once considered nearly impossible. The news reached the United States a week later. In a March 3 article, the Seattle Post-Intelligencer wrote “the ski-riding, rock-climbing, mule-packing mountaineers made their presence known to the Germans.”

It was not without carnage. The fight cost the division 926 casualties.

But their prowess as fighters was undeniable. General Hays initially told his superiors the capture of Mt. Belvedere would take two weeks. It took five days.

The 10th was not through fighting. They chased the Germans from peak to peak, determined to break the Gothic Line. From the time the 10th Mountain Division landed in January 1945 until the German surrender in late April, the division suffered more casualties than any other in Europe.

Most historians today recognize those costly battles provided little if any strategic value to the overall war effort. However, their triumphs, and particularly the capture of Mt. Belvedere, did much to enhance the reputation of American troops in the eyes of the broader public.

Moreover, the soldiers return home and their post-war legacy has made the division a subject of historical fascination.

“By the time the war was over, the fact that the mountain troops fought at all seemed less crucial to the division’s reputation than the skills and raw enthusiasm for the mountains the men brought back from Italy,” McKay Jenkins, a World War II author and historian, writes in his book The Last Ridge.

Bring the Boys Back Home 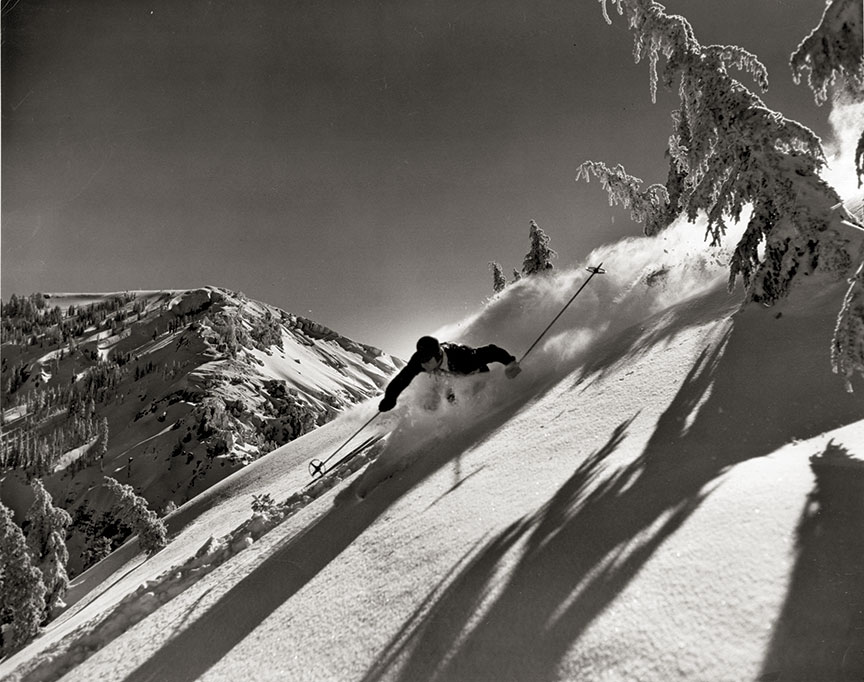 Chelton Leonard returned home and became the ski coach for the University of Nevada, Reno, a position he held for a decade. He was subsequently appointed sports technical director for the 1960 Olympic Games at Squaw Valley and later became the executive director of the National Ski Association.

Bill Klein helped found Sugar Bowl and was the long-time director of skiing at the resort. William Bechdolt returned to Tahoe City and opened the Tahoe Inn. He was a judge in the ski competition during the 1960 Olympics.

Roy Mikkelsen settled in Auburn, where he helped found both the Auburn Ski Club and assisted in the development of Boreal Mountain Resort. He was elected mayor of Auburn twice. Another veteran, Walter Prager, became head ski instructor at Squaw Valley.

Beyond the slopes of Lake Tahoe, the modern ski industry’s development in America owes much to the men of the 10th Division. Veteran Montgomery Atwater was a pioneer in avalanche science. A consortium of 10th Mountain Division men founded Vail, in proximity to Camp Hale. One of Vail’s ski trails bears the name Riva Ridge in memory of that triumphant battle. Aspen, Whiteface and Sugarbush were also founded by 10th Mountain Division veterans.

All told, more than 60 ski resorts were founded, developed or managed by those who fought in World War II with the Mountain Division’s insignia on their sleeves. All of which demonstrates that while a memorial highway sign serves as a nice reminder, the legacy of the 10th Mountain Division endures more resoundingly in the American public’s passion for the mountains and the variety of activities such terrain affords.