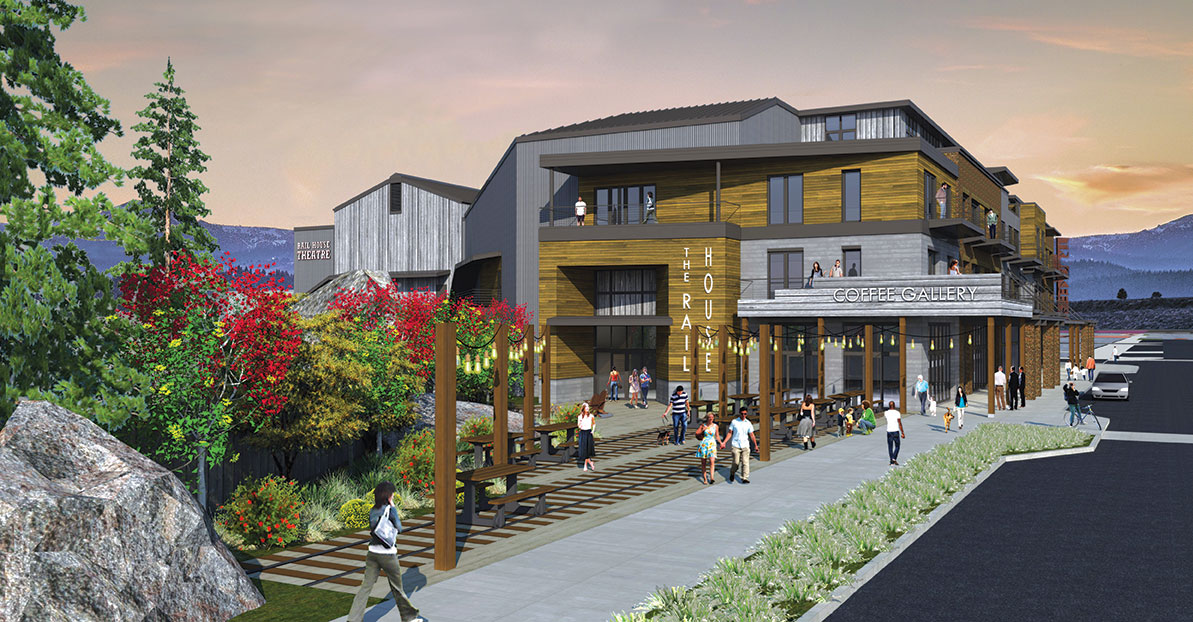 In the years since it was first proposed, headlines have proclaimed that Truckee’s Railyard development is “picking up steam,” or “leaving the station.”

But as the project has begun to truly gain momentum over the last few months, one of the most exciting developments is, to continue the train metaphor, the reduction in emissions coming from its smokestack.

The Railyard, a proposed infill project for the eastern end of downtown Truckee, was recently awarded $8 million by the California Strategic Growth Council from California’s Cap and Trade program, which, in combination with an existing $4.5 million in funding, will be enough to break ground as soon as next spring, says Rick Holliday of Holliday Development.

“We won the funding based on our project’s reduction of greenhouse gases,” Holliday says. “But we won that based on a small sample of the project—I think we’re going to save ten times as much carbon as any other project funded.”

That $8 million was the third highest award in the state out of the $121.9 million pool used for necessary infrastructure including roads, sewer and utilities, says town manager Tony Lashbrook.

“We hit the jackpot there,” Lashbrook says.

Holliday worked with Sierra Business Council to apply for the funding, in the end demonstrating reductions in carbon emissions by placing housing and a grocery store in a central location near a job center, thereby reducing vehicle emissions.

“We most recently got involved not just because we believe the Railyard can be a model for downtown redevelopment in the Sierra, but also a model for leveraging a new source of funding for the Sierra: cap and trade,” says Sierra Business Council president Steve Frisch. “This is an example of the correlation between reducing greenhouse gases and creating jobs.”

Based on a Caltrans model for vehicle trips and associated emissions used for the cap and trade grants, the first-phase aspects of the project, including affordable housing, will save 20,079 metric tons of greenhouse gases over the lifetime of the project, according to Holliday Development. The entire project would reduce greenhouse gases by 265,221.83 metric tons overall.

“The model can tell you, based on distances traveled, how many tons of gas are emitted—so the model generates a business-as-usual case and a new case and measures the difference,” Frisch says.

The funding required the use of that model with the dollar amount tied to the amount of greenhouse gas reduced, he says.

“Of the 28 projects funded by this first cycle of Cap and Trade, the Railyard was the seventh highest in reduction of emissions,” Frisch says, noting that the majority of other funded projects were in urban settings around the Bay Area and Los Angeles. “This is a strong case for investing in rural communities.”

That’s just the tip of the iceberg, however, as the model used to project greenhouse gas savings didn’t include things like a movie theater, one of the first proposed buildings in the Railyard, Holliday says.

Calling it the Rail House Cinema, the theater would not only show movies but could double as a cultural center for lectures, presentations and other performances, Holliday says. It will also include housing units wrapped around the outside, parking and commercial space.

“This will be the coolest mixed-use building I’ve ever done,” Holliday says. “We want to start building it in seven months, and once we start, it should take a year.”

Along with the theater, 60 units of artist affordable housing, 20 market-rate homes, a brew-pub, retail space, parking and a grocery store are all on tap to start development within the next three years, he says.

“Our plan, if everything stays on track, is a planning commission workshop, maybe in October, to really get direction on some of the key issues,” Lashbrook says.

After that, the Town Council would consider the master plan amendment and development agreement to continue the public process early in 2016, he says.

Potential challenges include making sure traffic circulation still works. The plan has changed slightly since its last town approval—which means road crossings of the balloon track, a loop of railroad used infrequently to turn around snowplow trains, Lashbrook says.

Union Pacific Railroad has been very cooperative in the process, which will include going to the Public Utility Commission regarding the road crossings of the balloon track, Holliday says.

“In general, people seem pretty excited,” Lashbrook says. “This is one of the most popular developments I’ve dealt with in my career.”

Looking beyond the benefits of the development itself, Frisch is excited for the Railyard as a model for other projects in Truckee, Lake Tahoe and the rest of the Sierra Nevada, he says.

“The types of projects this funding is good for would be along transit corridors with job centers nearby, so it’s perfect for places like Auburn, South Lake Tahoe, Mammoth Lakes, Grass Valley, Nevada City or Sonora,” Frisch says. “We need to be in a position to take advantage of that.”