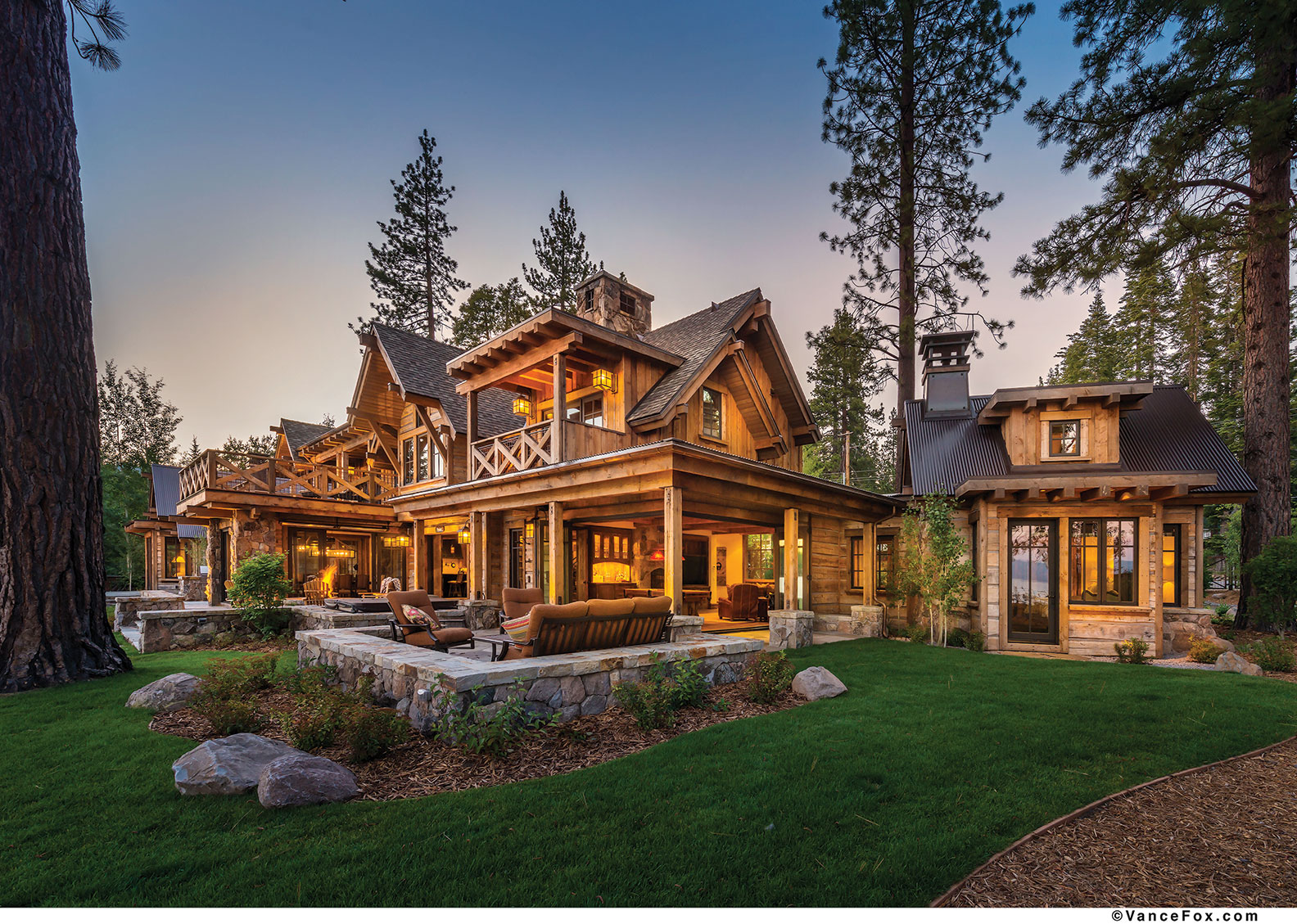 When guests unpack their bags and settle in to this Carnelian Bay home—and naturally gravitate to the game room, two piers and plethora of seaworthy toys—it’s tough to pry them away from the lakefront estate.

“What’s funny is that they’ll come and never leave the property,” says the Palo Alto–based homeowner, who prefers to remain anonymous. “They all like paddleboarding and going out in the boat, wakeboarding or towing on the air toys and going out at night. So they just kind of plant themselves right there.”

The home has that effect on people—more than they likely anticipate at first sight.

Tucked behind a double swing gate that matches the home’s wood and rock exterior, those passing by on Highway 28 catch only a glimpse of the meticulously designed house that blends into its surrounding landscape. A look into the property reveals more, including, from just the right angle, a window-framed view of Tahoe’s famously blue waters through the dining area.

To realize the full splendor of the nearly 8,000-square-foot home, however, one must tour the grounds inside and out. 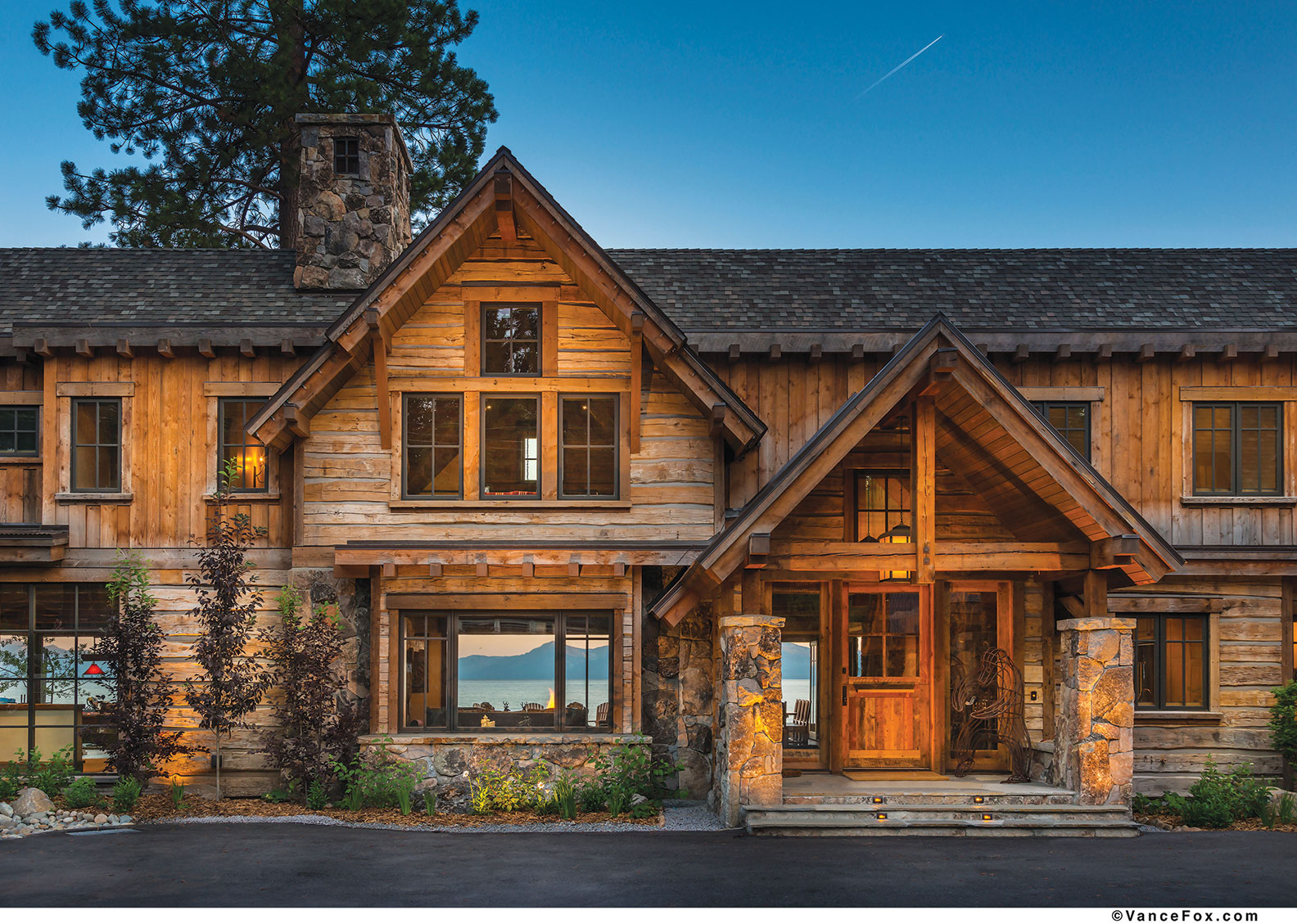 The exterior of the home features extensive rock work and reclaimed wood, photo by Vance Fox

“The house does not appear massive,” says builder Mark Neave of Truckee’s NSM Construction. “When you get in it, it’s got really functional spaces and good separation, and good connectivity to The Lake. It’s also unique in the design.”

The homeowners contacted Scott Gillespie of Truckee’s SANDBOX Studio to design their vision of a “timeless, Western alpine look” that was spacious enough to house their large extended family, yet still felt cozy when only the husband and wife visited.

In that regard, “I think they nailed it,” says the owner, who also prides the extensive use of reclaimed lumber throughout the exterior and interior—a feature that jibes with the native rock work and stone columns (from Truckee’s Johansen Masonry) that continue from outside to inside. To create the look of a log cabin, heavy reclaimed timber planking and chinking were used on the lower level of the home’s exterior, as well as select locations inside. 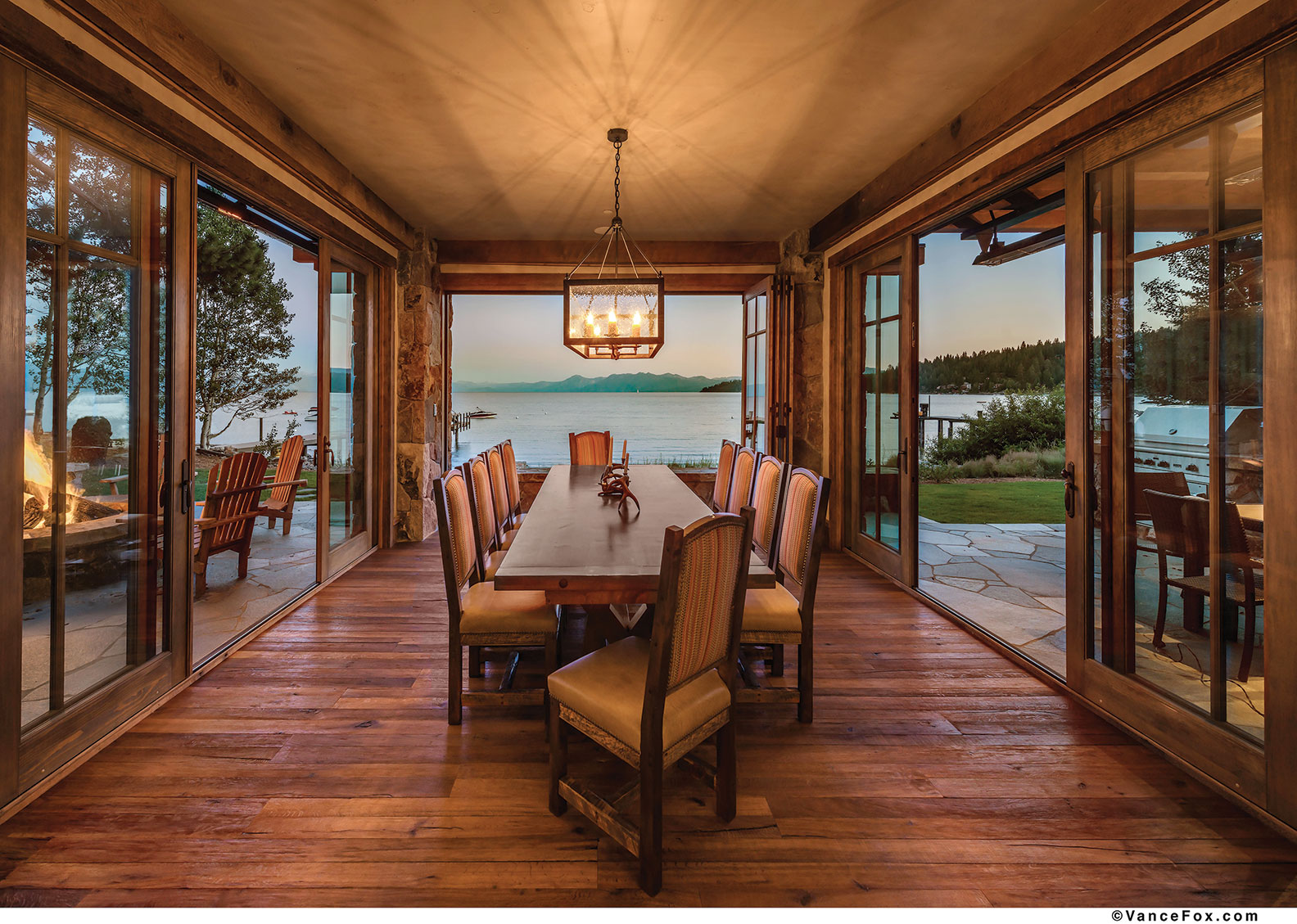 The dining room was designed to provide an open-air experience, photo by Vance Fox

While the skeleton of the home is built from traditional lumber, Neave says, all the timbers, posts and beams, siding, fascia, window trim and interior finishes are reclaimed wood from Montana Reclaimed Lumber Co. The company, based in Gallatin Gateway near Bozeman, has a golden reputation in the field of reclaimed lumber, Gillespie says.

“I used them on my own personal house. They have a massive yard and just incredible material,” Gillespie says. “A lot of the reclaimed suppliers will have smaller quantities and it’s varied. With Montana Reclaimed, I think the quality of their product and their selection is beyond comparison.”

In fact, adds the homeowner, the reclaimed lumber used on the home was sourced from all over the country, from naval shipyards in Alameda, California, to structures in Montana, Wyoming, Pennsylvania and even British Columbia.

Reclaimed wood is highly sought after and commonly used on new homes in the Tahoe area for a number of reasons, Gillespie says.

“People like the inherent visual character it brings. It looks different, and every piece is unique,” he says. “People also love the green aspect of it. You’re taking a product that was used for a hundred years, and you’re putting it on a home and you can probably use it for another however many decades. Another pro is that it’s lower maintenance. You don’t have the regular two-year stain cycles that you would have on new wood.”

The rustic theme of the home also matches the original cabins that were built on the site in the 1930s and ’40s, and were used to house Olympic athletes competing in the 1960 Winter Games at Squaw Valley, says the owner. While four of the six cabins were removed to make room for the main house, two were salvaged and updated into guesthouses.

“We essentially left them the way they were, and they’re cool. Our guests love staying in those cabins,” the owner says. 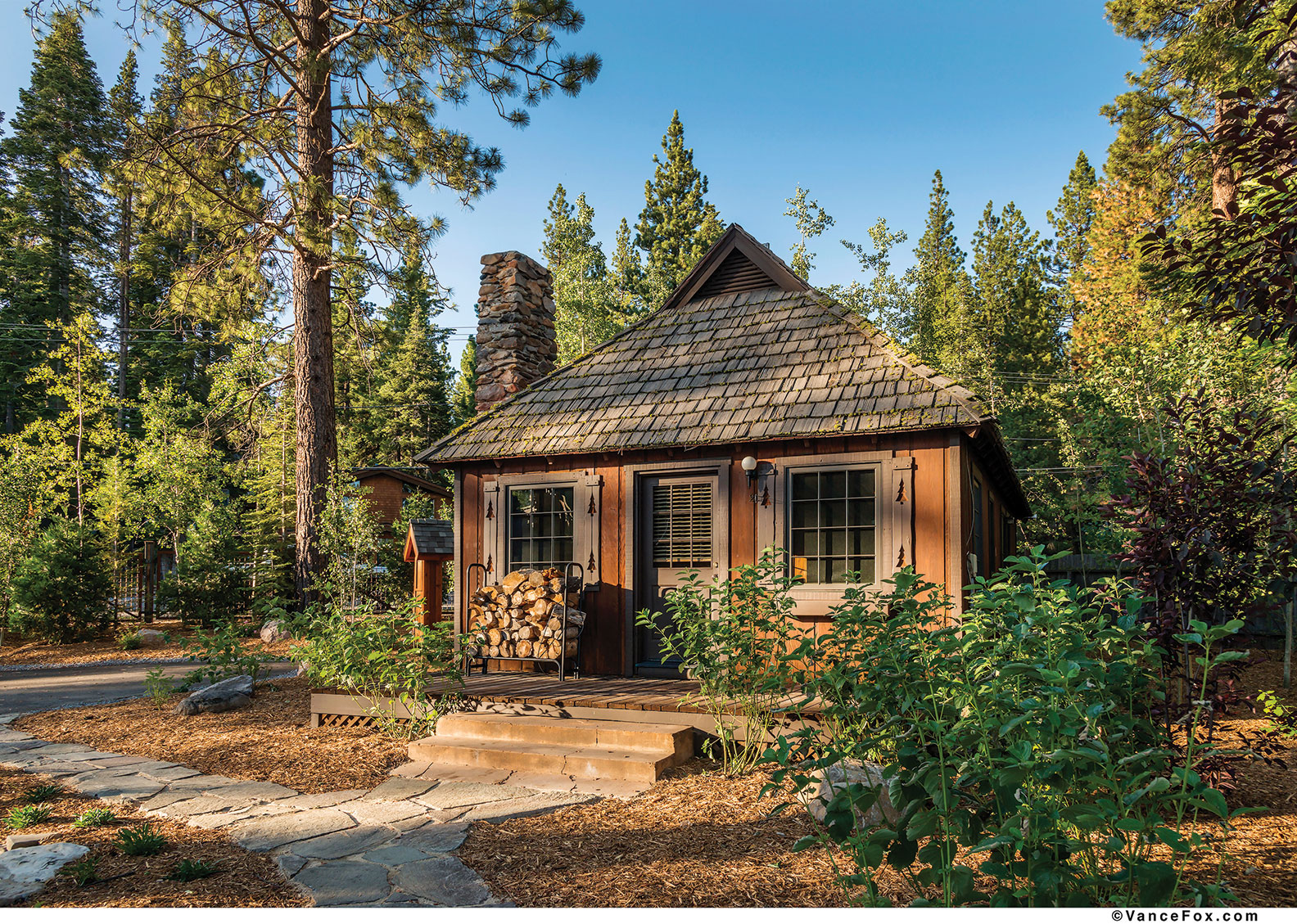 Guest cabins on the property were built in the 1930s and ‘40s and were used to house Olympic athletes in the 1960 Winter Games, photo by Vance Fox

The cabins and home are a stone’s throw from the rocky shoreline, separated by a sprawling lawn with pavers that lead past several large aspens and a bear sculpture to one of the two piers. A stone porch, flanked by balconies off the second floor, overlooks The Lake and includes a hot tub, gas fire pit, large barbecue and outside dining area, with a tetherball pole and disc golf basket situated just beyond.

The yard is indicative of the owners’ playful nature—and explains why their guests arrive and don’t want to leave. The yard and accompanying view also clarify why Gillespie wanted to create as many seamless transitions as possible from inside to out.

The entire corner of the game room, for example—which includes a custom-made wooden pool table and cue rack in the shape of a canoe—peels open. The dining and living spaces also include large sliding doors that open to the clean Tahoe air, with nifty hidden blinds that disappear into large reclaimed beams. 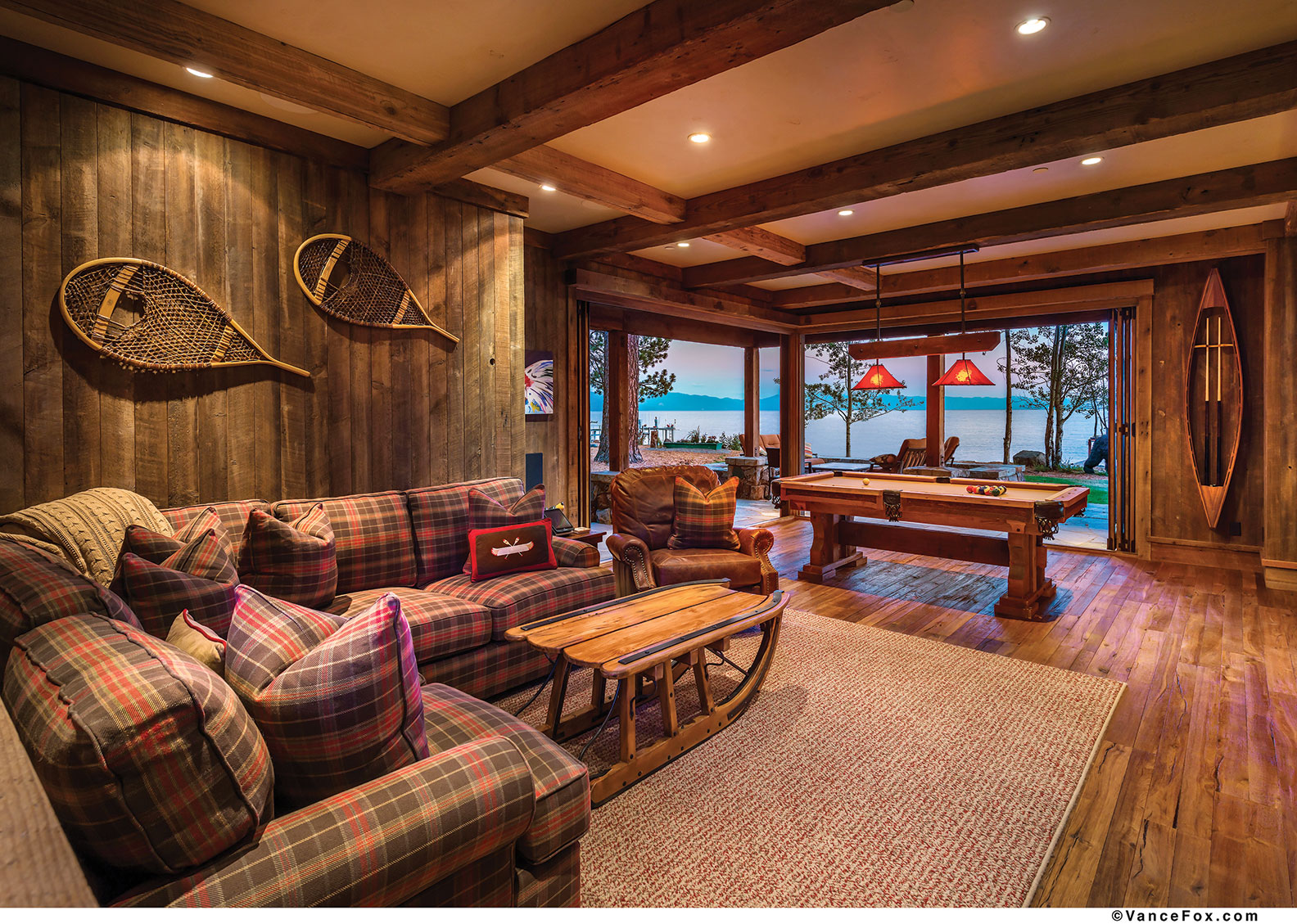 The game room opens to the outdoors and includes a custom-made wooden pool table and cue holder shaped like a canoe, photo by Vance Fox

Inside the home, interior designer Julie Johnson-Holland maintained the rustic theme of the exterior, while Wyatt Ogilvy and Ed Lupyak of Ogilvy Consulting were “instrumental in getting the project approved” by the Tahoe Regional Planning Agency, Gillespie says.

With all the thoughtful amenities inside and out of the home, it’s easy to overlook the garage. That’s by design. The main mass of the structure is a two-story, two-car garage that abuts another stone-clad garage, which is double deep. The two are connected on the inside, creating a large but rather unassuming area to park cars and boats.

“They wanted a really big garage for all their toys, and normally when you have a big garage it can kind of dominate the appearance of a house. So we took great pains in the design to kind of break that down; we wanted it to look like a little old stone cottage with a corrugated roof,” Gillespie says.

Since the home was completed in 2015, the owners, like their guests, have a hard time staying away.

“We use it a ton, more than we even imagined at first,” says the owner. “We just love it.”

Perhaps the best thing about the home, in Neave’s opinion, is that its owners not only use it often, they use it right.

“When we build these homes, many of them don’t really get used as they were designed to be, so it’s refreshing to see this family,” he says. “They drive it hard, and it’s just really functional, really durable and very practical. It’s fun to see that.”