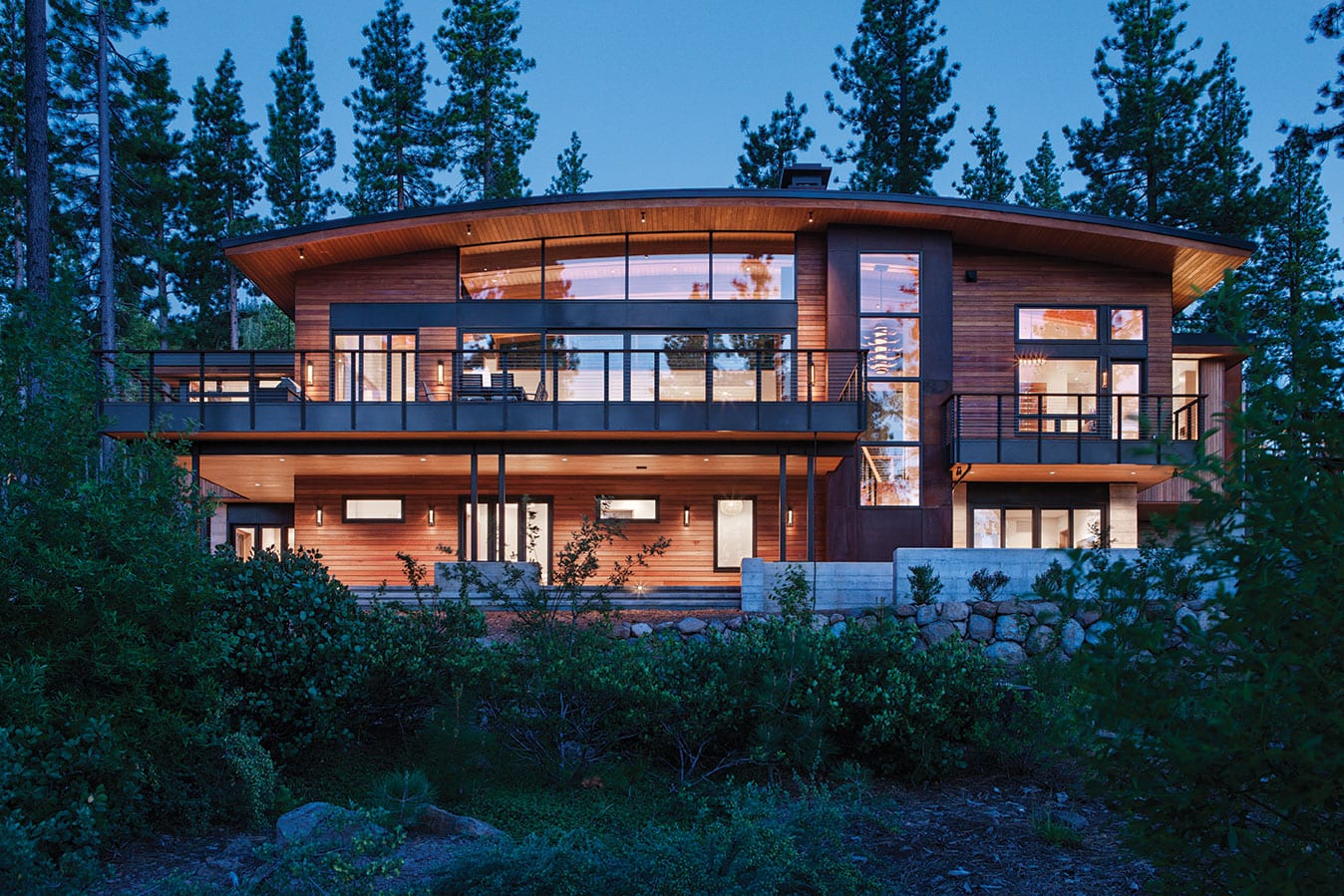 The home is highlighted by a large, curved roof that appears to float above the structure

Ahead of the Curve

The steep contours of Martis Camp lot 517 called for a structure that was as integrated as it would be beautiful. The singular simplicity of a crisp arc, grounded with weighty geometric masses, answered the call.

Resting in the shadow of Northstar’s Lookout Mountain, the synergistic relationship between land and structure is the result of optimized integration. The 4,000-square-foot home stands out by blending in, with a mixture of wood, stone, concrete and steel intended to blur into the surrounding landscape.

“It really is integrated into the site in a unique way compared to the average house,” says Keith Kelly, co-owner of Truckee’s Kelly & Stone Architects and principal designer of the home. “It has very minimal site disturbance. It just nestled in naturally on the property.” 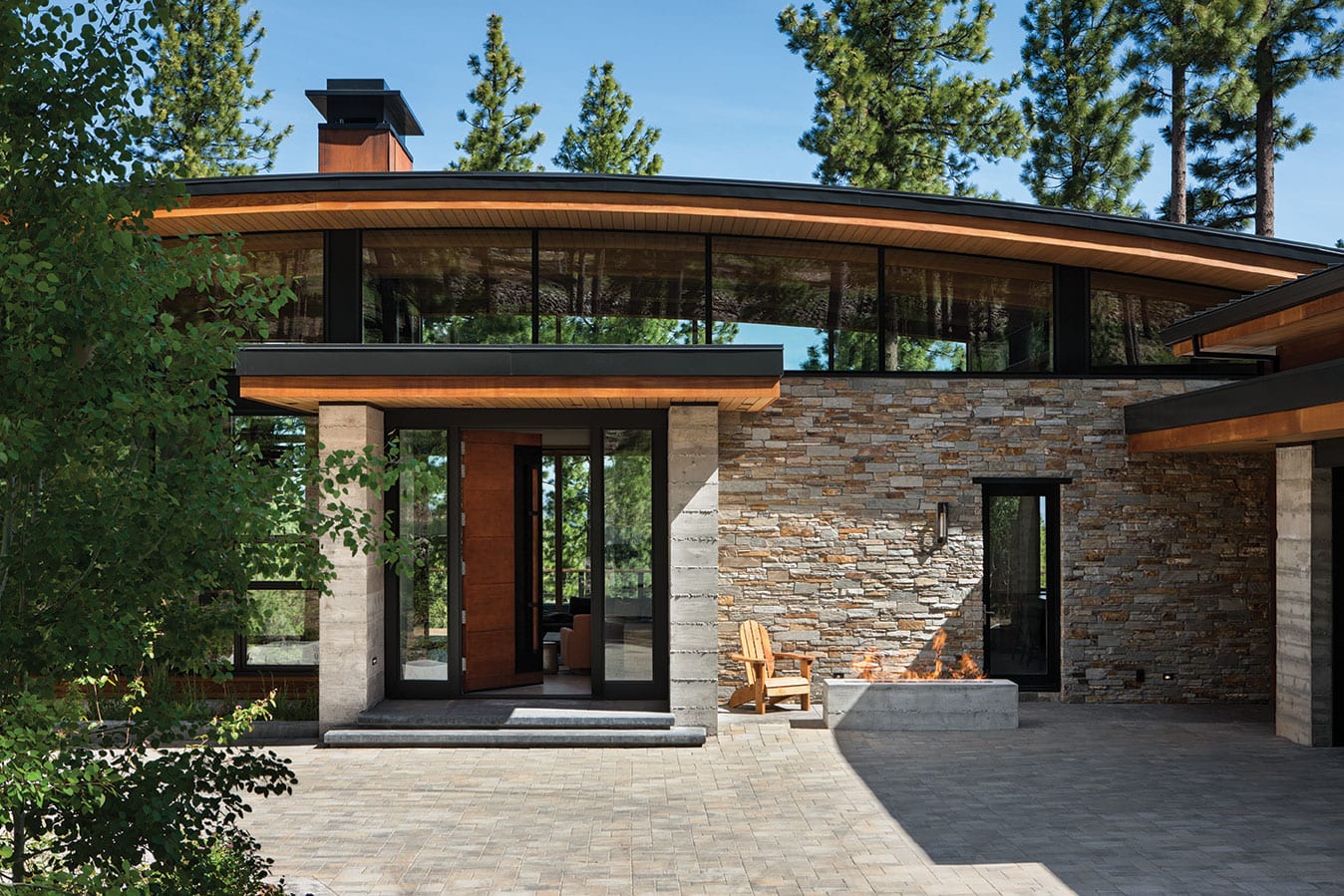 Completed in 2016, the home catches the eye upon arrival. The curving roofline deserves most of the credit.

At the request of the owners, a Bay Area artist and her husband, Kelly’s team designed a floating, curved roof that stretches the length of the home in one swooping arc perpendicular to the approach. Front and back clerestory windows allow the roofline to seemingly hover above the walls beneath, creating unobstructed views through the home’s soaring great room.

“When you approach the house, you have this transparency that’s pretty unusual in being able to see through it from the street, while also maintaining privacy,” says Kelly, adding that the roof is the most complicated structural element of the design, which otherwise is relatively simple in its mass and form. “The roof is approximately 60 feet long and visually supported underneath entirely by glazing, so there are only a few points of structure that connect from the roof down to the house itself.”

Project manager Leonard Stewart of Truckee’s Glennwood Mountain Homes says the roof posed the biggest challenge on the construction side, as well. The exposed curved glulam beams—which extend the entire length of the great room, supported on each end by traversing steel I-beams—are outrageously heavy and had to be placed just so.

“Getting all the calculations in and everything perfect so that the roof was nice and flat when we set those beams, that was probably the most challenging—just the steel work in there to support the roof structure itself,” Stewart says. 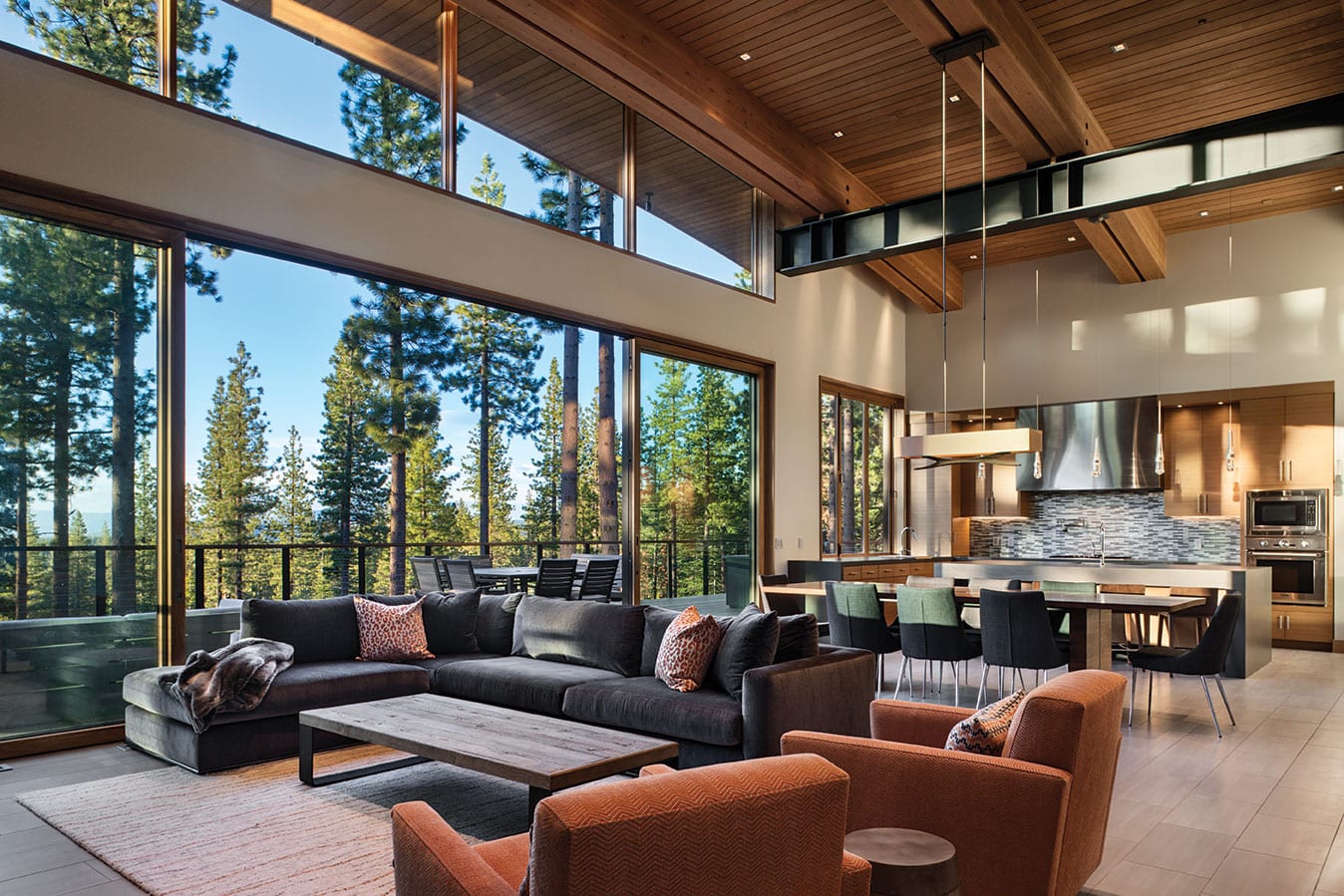 Consistent with the site-responsive design, a down-sloping driveway snakes between two large granite boulders to the home’s paver auto court. The front of the home, as well as the three-car garage flanking the driveway, are clad in stone veneer, installed by Reno’s Eric Schwedt Stone & Masonry. Clear cedar siding, patinaed steel and board-formed concrete complete the palette.

A king-size 5-by-10-foot pivot door made of wood and steel ushers guests into a spacious great room comprising the living, dining and kitchen areas. This open space is highlighted by a sculptural floor-to-ceiling fireplace constructed of multiple materials, including blackened steel, a leathery-brown COR-TEN steel and a rippled, interlocking wall panel system from modularArts.

“Given the open, expansive feel of the great room, the fireplace is truly the central feature of the room,” says Kelly. “It’s the core of the home, supporting the entire arched roof system, and deserved special attention.” 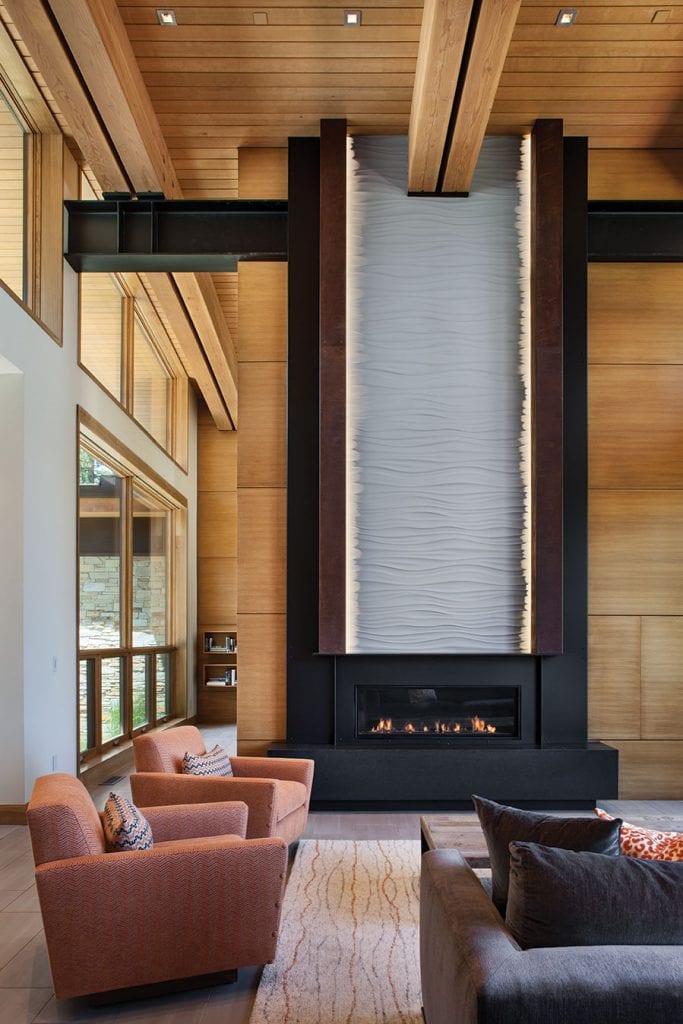 To achieve the owners’ desired indoor-outdoor living component, a large window wall system opposite the front door opens to an expansive deck through two 6-by-10-foot Weiland lift-and-slide glass doors. The deck is waterproof, allowing for a protected outdoor living space on the patio underneath.

The lower sides of the curved roof create separation at the more private spaces of the main floor, which include an office on one end and the master suite on the other. Composed as a contrasting architectural order, the master bathroom is dramatically cantilevered along a thin concrete blade wall.

“The master bedroom floats over the back patio and allows the landscape to flow under the house, which adds to the connection to the site,” Kelly says.

A tiered staircase built of rift-cut white oak leads to the lower floor of the home. At the base of the stairs, a large media/play room for the owners’ children is enclosed by a noise-muffling wall of glass, including a glass barn door, that floods the spaces with natural light and allows for a visual connection to the hallway. A bunk room and three guest rooms are also located on the lower level.

Kelly and his crew incorporated built-in cabinetry and shelves throughout the home to eliminate clutter and add to the clean, mountain modern feel that the owners envisioned. 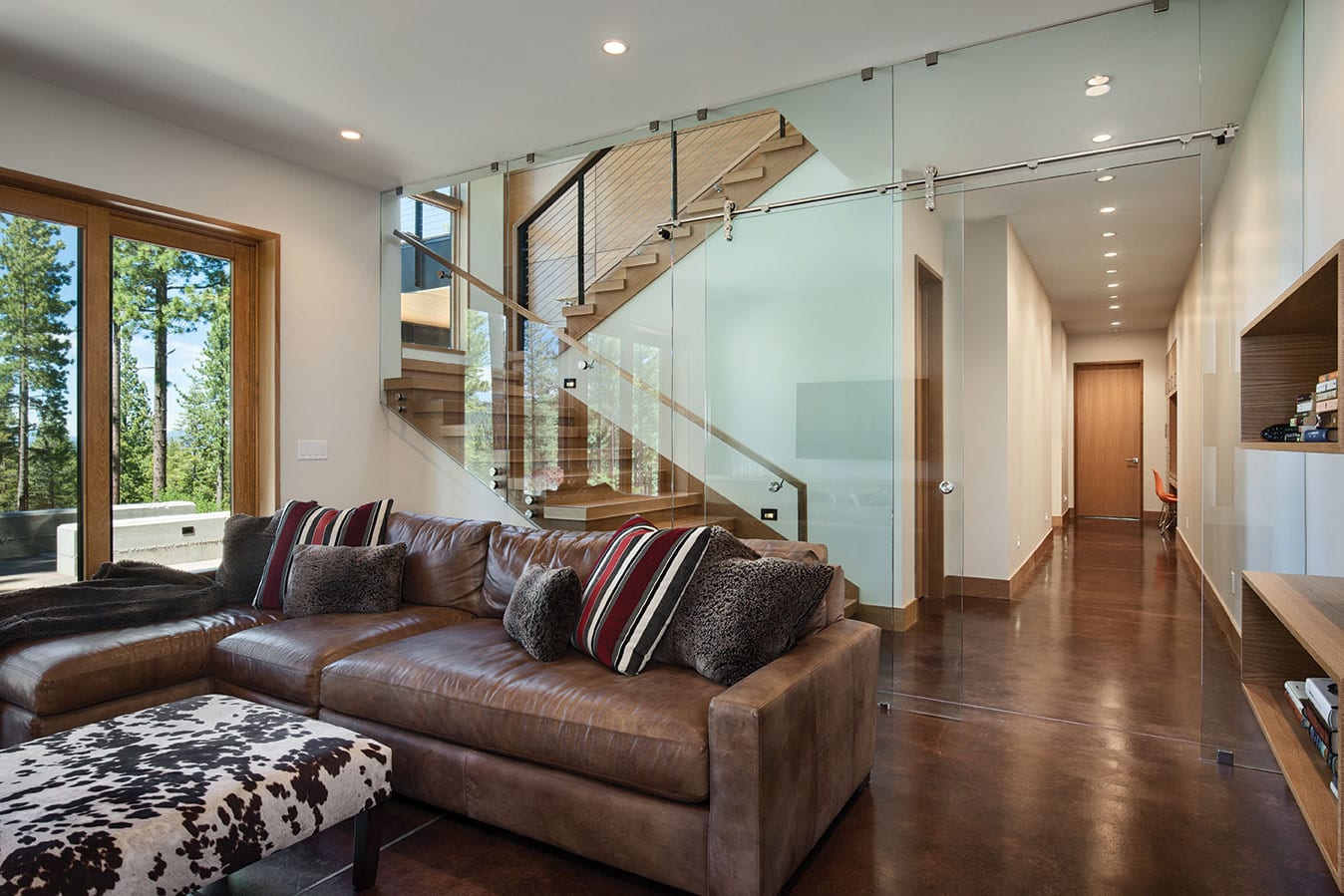 All told, Kelly says the home project was a fluid process from the start thanks to the collaboration among the architects, builders and owners.

“The contractors’ involvement was crucial to the project, not only to make sure we were hitting the budgetary goals, but also to look for resources. And they helped us from day one with the curved roof element,” Kelly says.

Stewart adds that the owners were as involved with the project as any husband and wife he’s worked with over the last 20 years. The wife, in particular, provided valuable input as an artist with a keen eye for detail.

“The clients were both involved, especially in the design aspects,” Stewart says. “We worked in tandem with them throughout the entire project.”

Looking back, Kelly says his favorite aspect of the home is how natural it looks on the site, seamlessly blending into the surrounding trees and boulders. Stewart enjoys the architectural details.

“I can’t tell you how many people ask me, ‘Is it as cool on the inside as it is on the outside?’” he says. “I would have to say—and not because we did the house—it’s probably my favorite home in Martis Camp. It has great street appeal.”