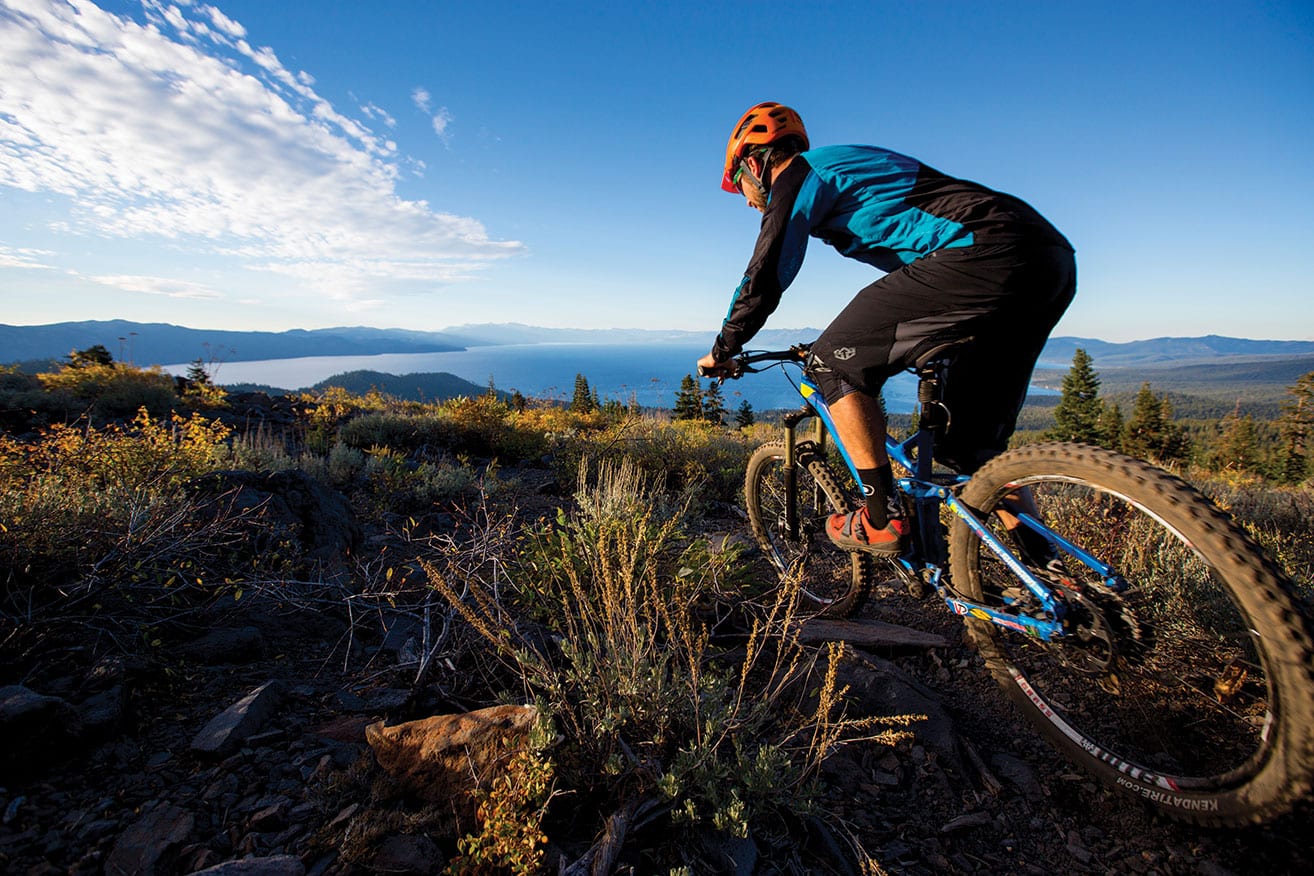 29 Sep Enjoying the Highs of the Low Season

Shoulder season in Tahoe is the valley between two mountains, the lull between summer adventures and winter thrills.

During this stretch—generally from mid-September to mid-December—residents and the area’s rare visitors enjoy the bounty of the low season. Few tourists, no traffic—just peace, quiet and the beauty of Lake Tahoe as the community returns to its roots of slow mountain living.

“Most people don’t live up here to make bank. They are here for the quality of life, and that is way better when it’s quiet, when you can have beaches to yourself and it doesn’t take forever to drive places.”

This period between high seasons is cherished by Tahoe locals, who take to the outdoors with bikes, surfboards and crash pads in tow. Often with less restrictive seasonal work schedules, they’re able to pursue the true reason they moved to Tahoe in the first place: to play.

Biking and climbing, in particular, benefit from the cool, crisp temperatures that fall brings. 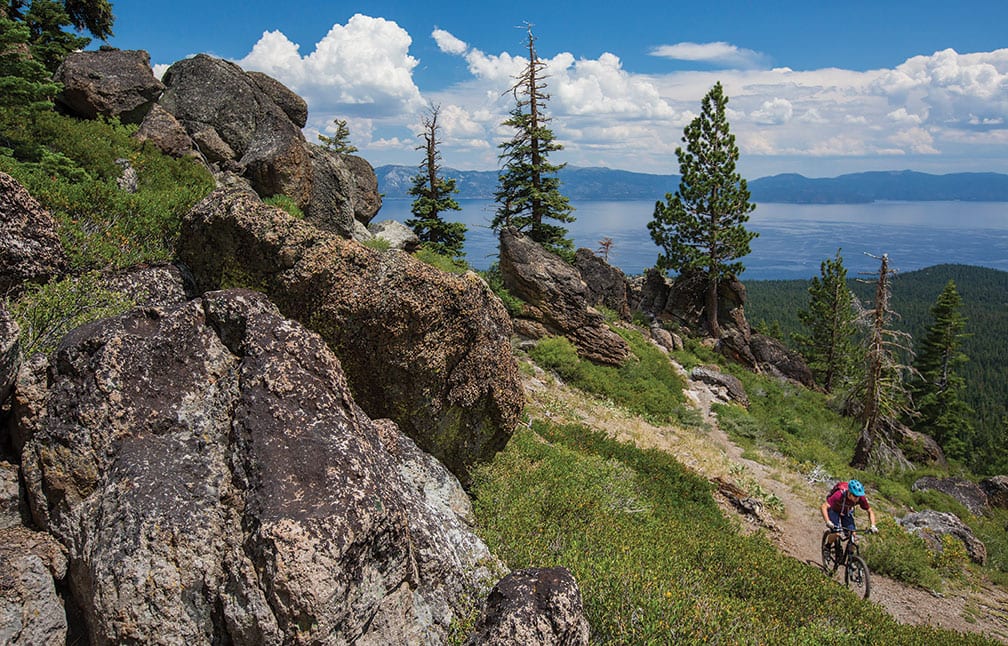 “In October, the trails have already been ridden hard. I am looking for a bit of precipitation. A bit of rain and cooler temps makes it perfect,” says Jon Rockwood, an avid mountain biker, skier and videographer from Truckee.

Damp trails are a fall luxury, Rockwood says. While Tahoe occasionally receives summer rain, the moisture is almost immediately sucked out of the dirt due to the hot temperatures and high sun angle.

“This takes you back to Tahoe moon dust, and you find yourself always chasing wet dirt and not necessarily finding it,” Rockwood says. “In the fall, we get more consistent rain events. Following those rain events, the sun angle is so much lower and the temps are so much cooler that the moisture hangs in the dirt for much longer. On north-facing trails, it remains moist and sometimes the moon dust is gone.”

Another benefit to mountain biking in the shoulder season is the colorful scenery of the trails, where quaking aspens and other deciduous trees are ablaze with fall colors. Marlette Lake, a picturesque natural lake along the Flume Trail, high above the East Shore, is among the best locations around Tahoe to view the golds and reds of  aspen groves. 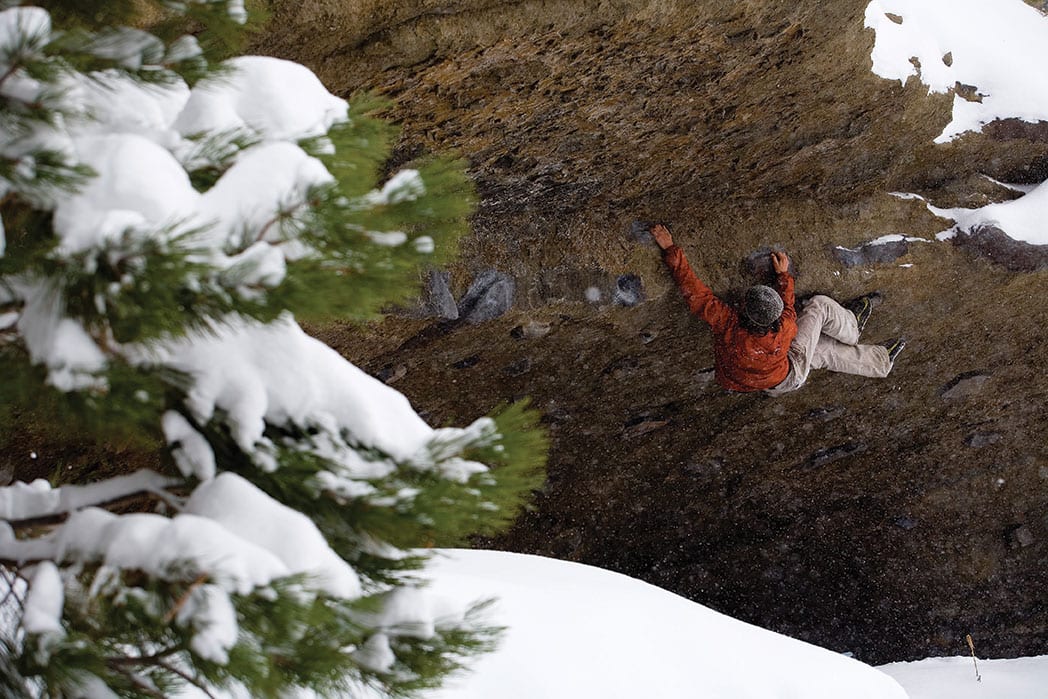 While summer days are often too hot for climbing, and winter is too cold, Tahoe’s rock climbing and bouldering scenes thrive in the shoulder season.

“Every good climbing area in the States is prime in October. In Tahoe, even at the higher elevations, the temperatures are cool and manageable,” says Reuben Shelton, a world-traveling big-wall climber and lead instructor at Reno’s RopeWorks. “When the air temperatures go down, so do the rock surface temperatures. Bottom line is that you can climb harder when it is colder. It’s the coefficient of friction between your shoes, the rock and your fingers. Rubber works better when it’s colder.”

Though October is generally one of the best months for climbing, the weather can make or break it. Once the rain starts falling, climbing days are often postponed.

“Worst-case scenario is that you have to wait it out,” says Dave Hatchett, author of Tahoe Bouldering Guides. “With lower sun angles, the moisture gets stuck in the lichen. So if storms are back-to-back, the humidity and the wet rock can take away from those perfect climbing conditions.”

Even after a major rain event, however, there’s usually somewhere to climb in the greater Tahoe area. 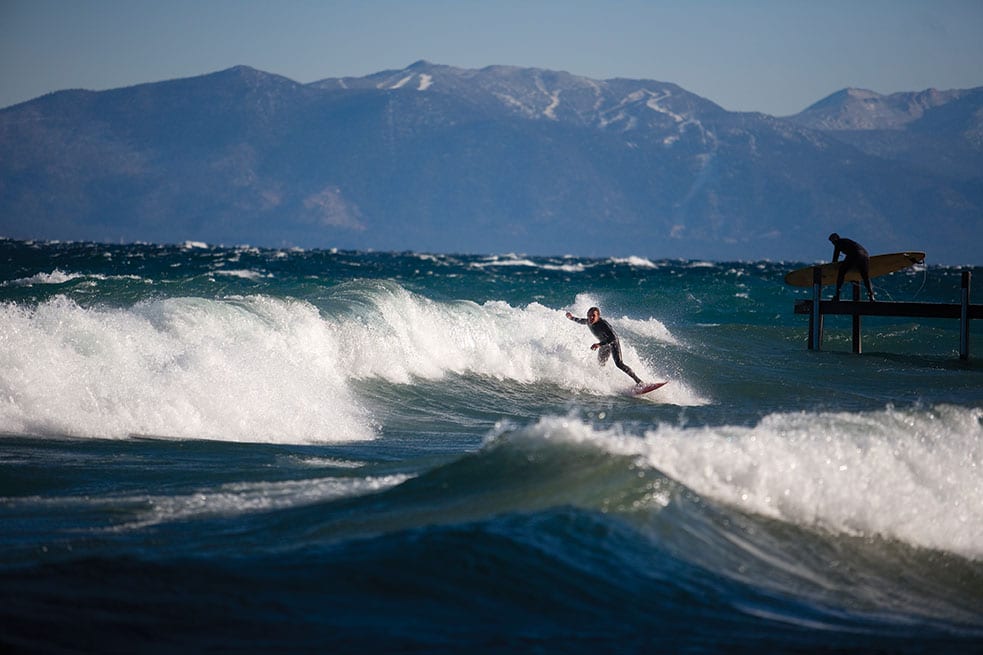 An unknown surfer brings the aloha vibe on a rare wind swell on Tahoe’s West Shore, photo by Ryan Salm

As the shoulder season moves from the warmer days of September and October into the dreary days of November, Tahoe’s adventurous minds start to wander toward the approaching ski season. For Gaffney, that’s when Tahoe’s surf season ramps up. Gaffney is constantly watching the weather in hopes for the right storm cycle.

“For surf, you need to have good windstorms that typically precede winter storms,” he says. “It’s usually a wintertime thing, as that’s when the storms and pressure systems are most potent. But these storms can happen as early as September, which is a real treat as the water temperature is still warm.”

When windstorms do hit, the surf can be temperamental. Tahoe waves differ from ocean waves in that they are “pretty much always messy,” Gaffney says. This is because the energy on The Lake ebbs from wave to wave, kind of like a boat wake.

“So a wave will peak in front of you, but if the timing isn’t right for the wave to feel the bottom and break, the energy will dissipate and rebuild in the wave behind that one. So a lot of times when you see your wave rolling in, that’s not actually the wave you want. It’s the wave behind,” says Gaffney.

Another challenge with surfing on Tahoe is paddling out. Gaffney says the ideal wave size is about shoulder height. But when waves get bigger than that, which they occasionally do on Tahoe, conditions get unruly: “With one-and-a-half- to two-second intervals between walls of white water, there’s no way for even the best duck divers to make any ground.”

Due to the Tahoe Basin’s topography, favorable wind cycles move in from the southwest and blow across The Lake, says Reno meteorologist Shane Snyder. This explains why surfers generally frequent the north and northeast shores.

“The wind can’t blow from west to east because of the terrain,” Snyder says. “You have mountain ranges on both sides and the wind needs to go somewhere. South Lake Tahoe has a large valley that the wind funnels through.” 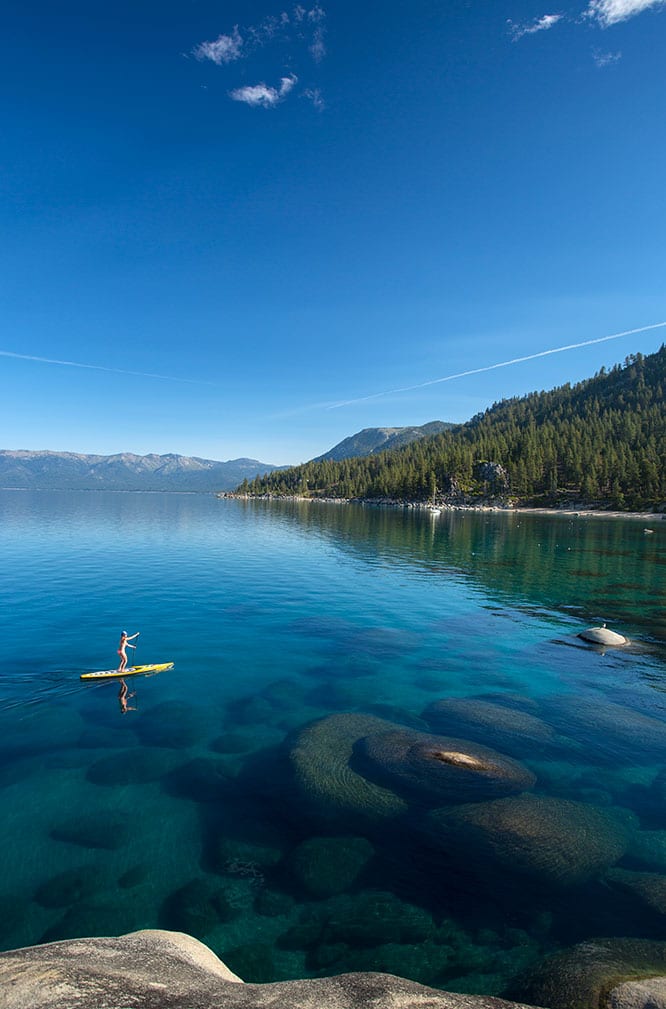 Calm on The Lake

While surfers enjoy Tahoe’s turbulent times, the weather is more often sunny and mild during shoulder season. This creates ideal conditions for paddlers, who take advantage of the calm after the summer crowds have dissipated.

“The best aspect of fall on The Lake are the amazingly glassy conditions all day long,” says Chris Brackett, owner of South Tahoe Standup Paddle.

Although Tahoe locals often say they came for the winter and stayed because of the summer, an increasing number of residents are finding that the fall shoulder season is a prime time for outdoor recreation.

Sometimes, the slow and low is the true high. 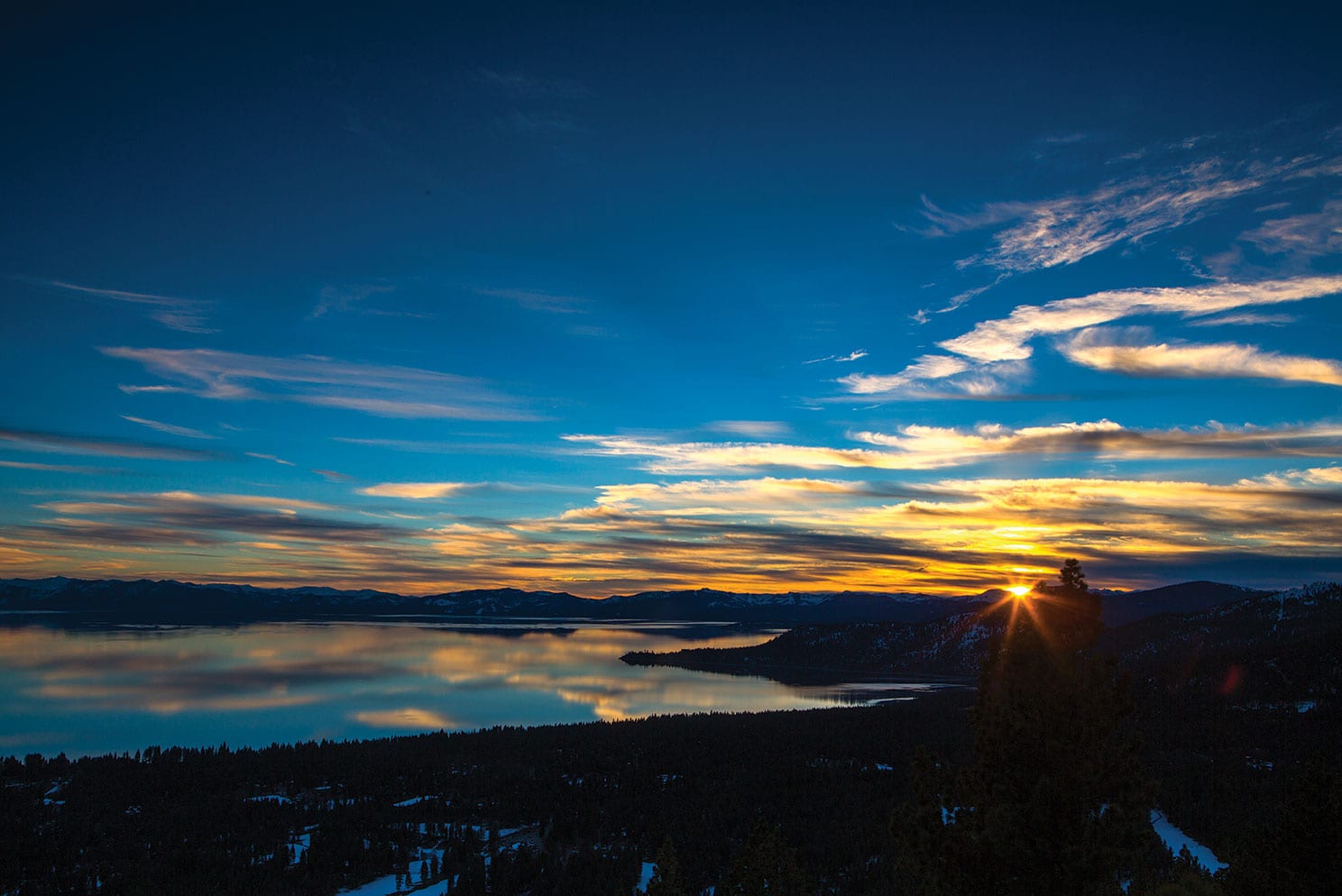 The sun sets over a calm Lake Tahoe on a beautiful fall evening, photo by Ryan Salm