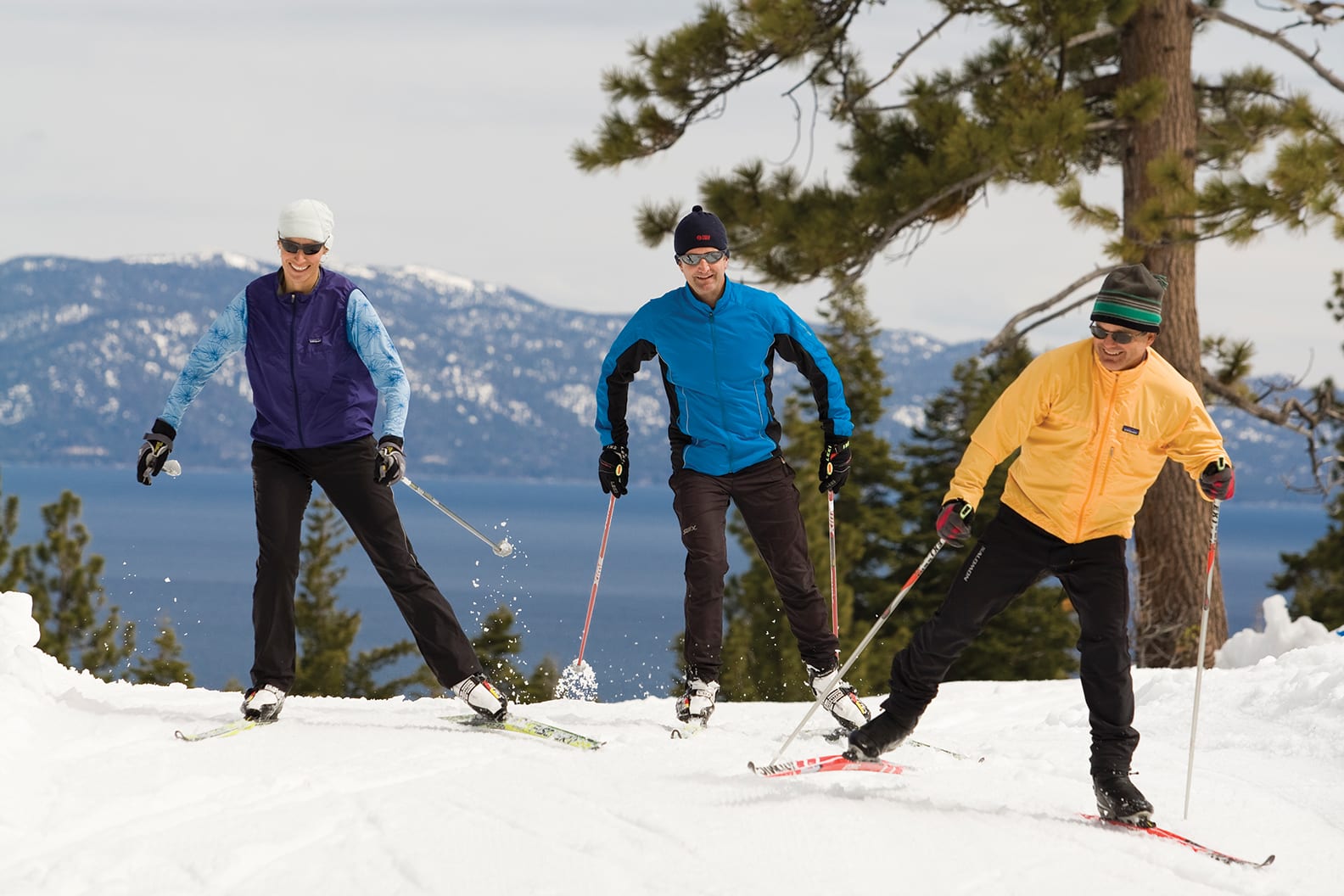 After years of drought and the loss of its leader, Tahoe Cross Country surged back with the help of a dedicated community

Cross-country ski areas are particularly vulnerable to the vagaries of winter. This is especially true for Tahoe Cross Country, which, at a relatively low elevation of 6,600 feet, needs cold winter storms to open its extensive network of trails above the North Shore of Lake Tahoe.

But those storms never came in the winter of 2013–14, and the resort suffered a major financial hit. Staggered by the blow, it endured an even drier 2014–15 that limited operation to only 20 days the entire season (an average season is about 120 days).

Then, at the nadir of its existence, Tahoe Cross Country lost its beloved leader, Kevin Murnane, on February 24, 2015.

Tahoe’s Nordic community was devastated, its resort crippled. But the months and years following Murnane’s death, and the persistent drought that took a deep financial toll on the resort, showed the perseverance and resiliency of Tahoe’s tight-knit skiing community.

It was that support and determination that kept Tahoe Cross Country afloat in the toughest of times—and the memory of Murnane that inspired a community to rally around its struggling resort. 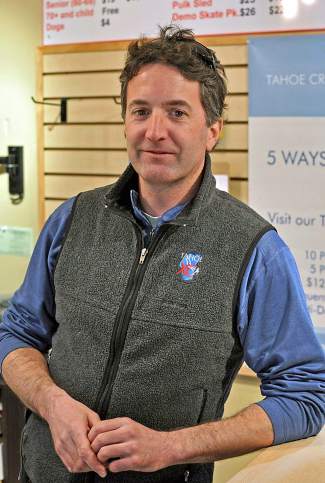 There has been a cross-country ski area on Tahoe City Public Utility District (TCPUD) land since the mid 1970s. The current ski lodge was the pro shop for a short-lived nine-hole golf course. The trails start out from the course’s former fairways and fan out into Burton Creek State Park. It’s a remarkable network of rolling trails that provides for a wide variety of ability levels, and even dishes out a few spectacular views of Lake Tahoe.

The resort started as Tahoe Nordic Ski Area run by Skip Reedy. Doug McNair began working as a groomer for Reedy in 1982, back when grooming meant “pulling corrugated rollers and a track pan behind a snowcat,” McNair recalls. Those early days were tough, too, with Reedy making ends meet by placing a shoebox on the counter for donations.

The first order of business for the new nonprofit was to find the right people to run it. They came across Kevin and Valli Murnane, who at the time worked at the remote Montecito-Sequoia Resort on the edge of Kings Canyon National Park.

“Working long days, we dove right into creating a ski area from scratch,” says Valli. “Kevin and I then worked side-by-side for 16 years at Tahoe XC, nurturing every element of the business and the nonprofit.”

They were a great team. Kevin was the face of the resort, with a focus on making it a friendly place to ski. Valli was the get-’er-done person, supervising the children’s program and helping out wherever else she was needed.

Taking advantage of good snow years, they instituted new programs like the Winter Discovery Center and free skiing for schools. They expanded the youth Strider Glider program from about 50 children to around 200 today. Valli also added a children’s biathlon program, which is where several current national-level biathlon competitors got their start. There were also Devo and Comp training programs to give young athletes a chance to hone their skills. 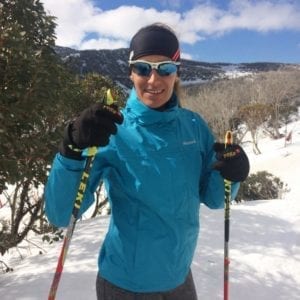 Then came the bad winters. The seriousness of Kevin’s depression became evident in the winter of 2011–12, when the ski area experienced a short season with little snow.

Kevin had fought off his depression for years by hard work at the ski area and early-morning exercise. After 2012 he focused on training for the 2014 Ironman Lake Tahoe triathlon, which Valli had successfully completed the year before. Valli says the training helped him. What did not help was the last-minute cancellation of the race due to wildfire smoke from the nearby King Fire.

The letdown, combined with the ensuing drop in endorphins from constant exercise and the historically dry winter of 2014–15, sent him into a downward spiral that he was unable to climb out of. Kevin was found near the Tahoe XC trails by members of the Tahoe Nordic Search and Rescue Team, many of whom were his close friends.

The impact on the Tahoe XC skiing community was profound. Around 1,000 people filled the ski area parking lot for Kevin’s memorial. Many tears were shed with the loss of a friend. The tragedy also brought some realistic fears: What does this mean for the future of the ski area?

Aside from losing its leader, the resort had been devastated financially by consecutive bad winters. Tahoe XC doesn’t have the financial backing of a downhill ski resort or homeowners association. It survives on season passes, day tickets and rentals, and through donations to the nonprofit organization. The coffers were empty.

The resort had two immediate issues: Figure out who would run the place, and how they were going to come up with the capital to continue. Valli became the director. She had already been assuming many of Kevin’s duties while he fought depression, but taking on all of it was a big job, especially for a recently widowed mother of two school-age children.

While Valli spent the spring and summer getting ready for her new expanded job, the board of directors embarked on an ambitious fundraising effort to stay afloat.

It began as the “Low Snow Funding Campaign,” with the goal of raising the $80,000 in funds needed to open for the 2015–16 season. When the totals came in about $20,000 short, an anonymous donor agreed to match donations, and the community came through—in the end donating nearly $150,000, much of it in small contributions from local season pass holders.

The following winter, 2015–16, the snow returned. Tahoe XC was back on the upswing.

“The key to Tahoe XC’s success that first year was snow on the ground and that 100 percent of the staff came back,” says Valli. “It was really helpful to move forward without Kevin to have all that historical knowledge from the staff that had been there for years. We were all pulling together because we all faced the same loss.”

The community was supportive as well.

“We didn’t take a hit, didn’t see a decrease in participation. There was pent-up demand after two poor snow years prior to that,” Valli says. “Having the snow was a gift. People were eager to get out and do what they love doing.”

The winter of 2016–17 was among the snowiest on record in Tahoe, but it also came with rain, power outages and road closures. Despite the challenges, the ski area operated 123 days.

After the season, however, Valli left to become the director of recreation at the TCPUD. Her departure created a new challenge for the board. For the first time since 1999, there would not be a Murnane at the helm. 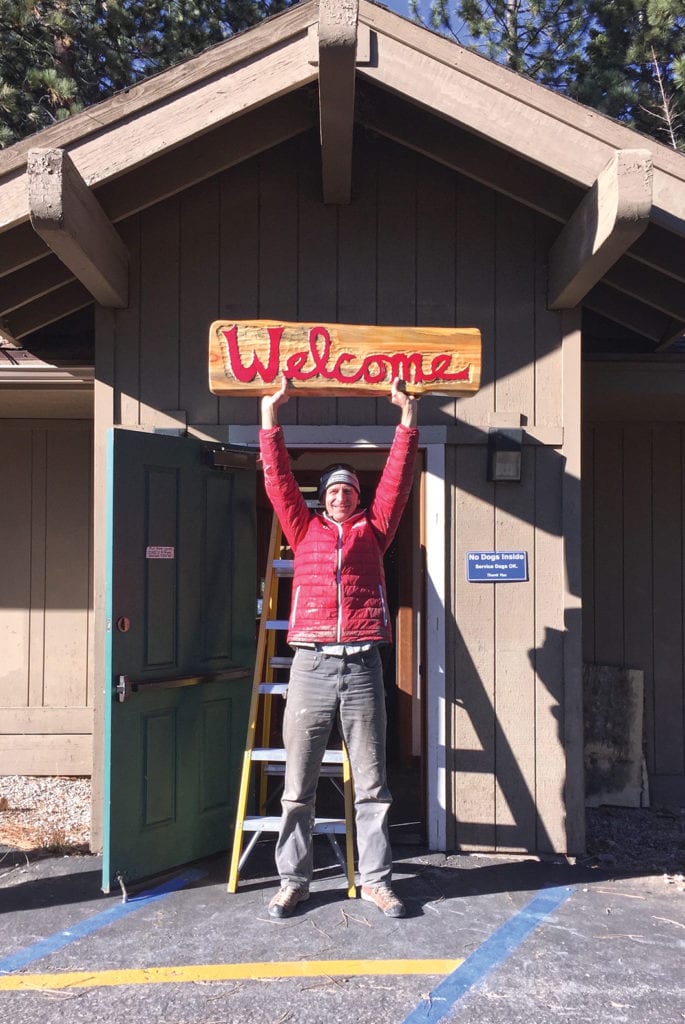 The board selected Ben Grasseschi as its new executive director. A longtime local, Grasseschi coached for the Far West Nordic and Auburn Ski Club programs on Donner Summit, training athletes who began their cross-country racing careers in the Strider Glider program.

“When I stepped into the job I knew it wasn’t going to be easy,” Grasseschi says. “Part of the interesting thing was the challenge. The challenge was more behind the scenes. Returning employees had it dialed and made my job easier.”

Grasseschi set to work on an extensive makeover of a portion of the lodge in anticipation of another big winter. The season started slowly, though, and the ski area was unable to open for the crucial 2017 Christmas holiday. It operated only nine days in January. But then, finally, the heavy snows arrived for a marvelous March.

“Once we were up and running, people were fired up,” Grasseschi says. “There was a tremendous energy and excitement. Towards the end of April when conditions were marginal, people were still excited about skiing.” 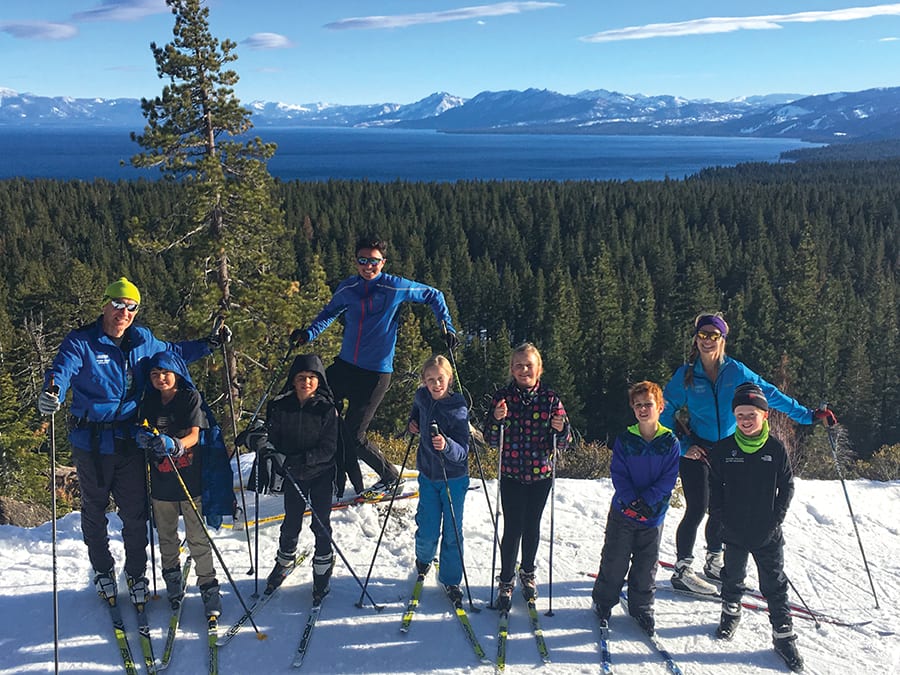 A group of young Strider Gliders and their coaches stop for a break with a view over Lake Tahoe, photo by Tim Hauserman

These days, like the old, Tahoe XC’s groomed trails are the place to be in the snowy winter months.

“I seriously cannot speak highly enough about that place,” says Linda Tripp, who skis at the resort nearly every day of the season. “Everyone is so friendly, happy and healthy. When I ski, both sets of cheeks hurt.”

Fellow ski addict Prudence L’Heureux picked up the sport three years ago. She learned quickly, earning two second-place finishes and a third place in the three races she participated in last season.

“They offered free lessons and I took advantage of it. It was priceless,” says L’Heureux. “They do the best they can so we can come to ski regardless of the conditions.”

The Lehmkuhl sisters, Quinn and Kili, both started skiing in the Strider Glider program at Tahoe XC as preschoolers. Now, Quinn races for the prestigious cross-country program at University of Colorado, and Kili is a top racer for North Tahoe High School and Far West Nordic. Quinn was a recipient of the Kevin Murnane Scholarship, which helps local Nordic skiers pay for college.

“It’s been pretty amazing to have trails so close to home. They always made the best of what they had, grooming what they could,” says Quinn. And after the loss of Kevin, a close friend of her family, “Everybody came together to help Valli and support Tahoe XC,” Quinn says. 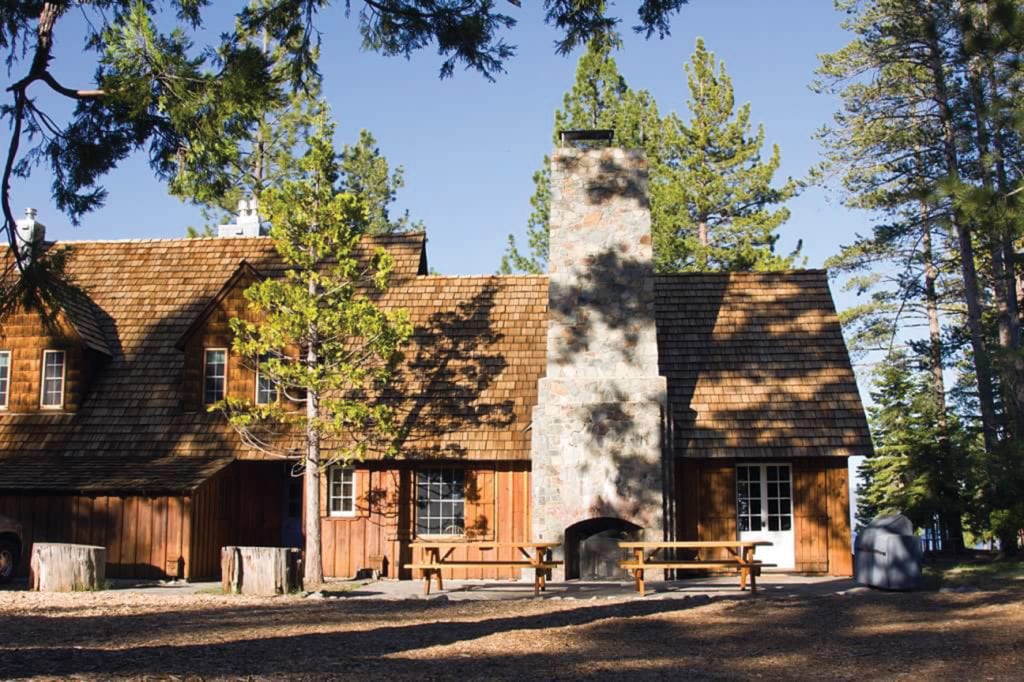 Built in 1936, the Schilling Lodge near D.L. Bliss State Park was donated to be used as a new lodge at Tahoe Cross Country. The building was deconstructed and is in storage while permits are obtained for construction, courtesy photo

Now, Grasseschi and the board of directors are full speed ahead. A donation from the Kiwanis Club of North Lake Tahoe and the Tahoe City Recreation Association means that Strider Glider kids will be skiing on new equipment this winter. Grasseschi is planning a more ambitious race schedule and hopes to develop a masters program to help older skiers with their skiing.

Meanwhile, the board is taking on the colossal effort of building a new lodge.

In 2012, John Mozart purchased the Schilling Lodge property near DL Bliss State Park. The home was built in 1936 and had been a part of the Schilling Family for five generations. Mozart wanted to build a new home on this spectacular lakefront property, but he also wanted to preserve the historic building. To achieve both, he donated the building to the TCCSEA in 2015 to be used for a new lodge. 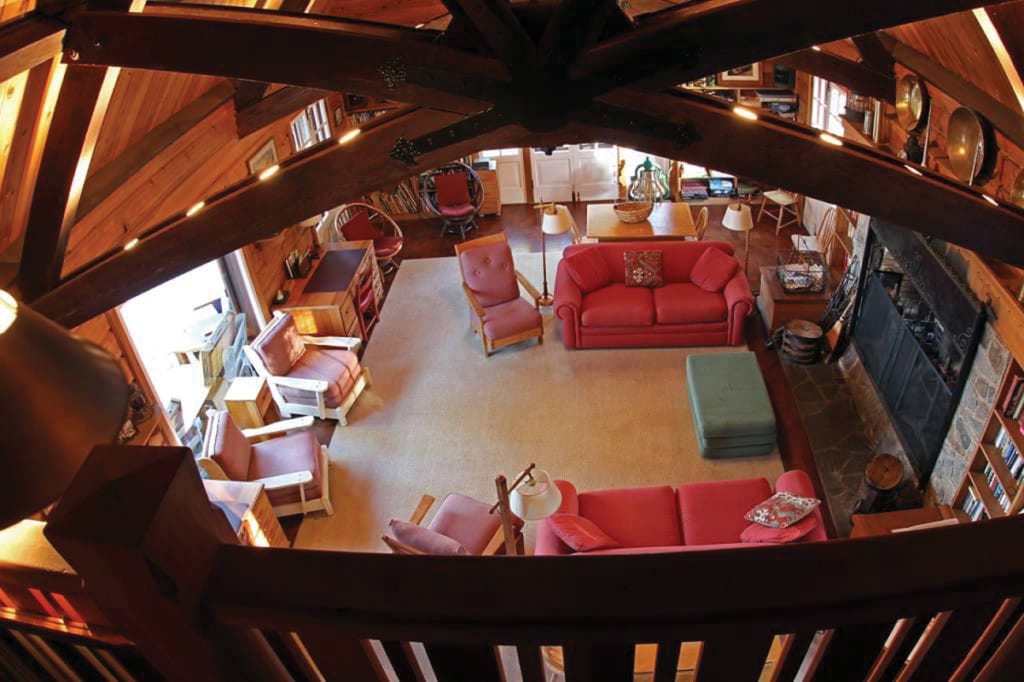 The rustic interior of the historic Schilling Lodge, courtesy photo

The historic building was deconstructed and is in storage while the lengthy process of gaining permits for construction, and obtaining the funding necessary to rebuild the lodge, is underway.

“The existing parking lot and building are not working,” says TCCSEA board member Don Heapes. “A historic building will have a second life as the heart of the community.”

While the resort has struggled through difficult times over the years, Tahoe XC continues to survive—even thrive—in the woods above Lake Tahoe. It does so not only because it is a great place to cross-country ski, but because it is a gathering place and a refuge for a devoted group of Tahoe ski fanatics.

For more information on the efforts to restore the historic Schilling Lodge and how to help, go to www.theschillinglodge.com.

Tim Hauserman has taught cross-country skiing and directed the Strider Glider program at Tahoe XC for the past 15 years. He is a Tahoe City-based freelance writer and author of Cross Country Skiing in the Sierra Nevada.