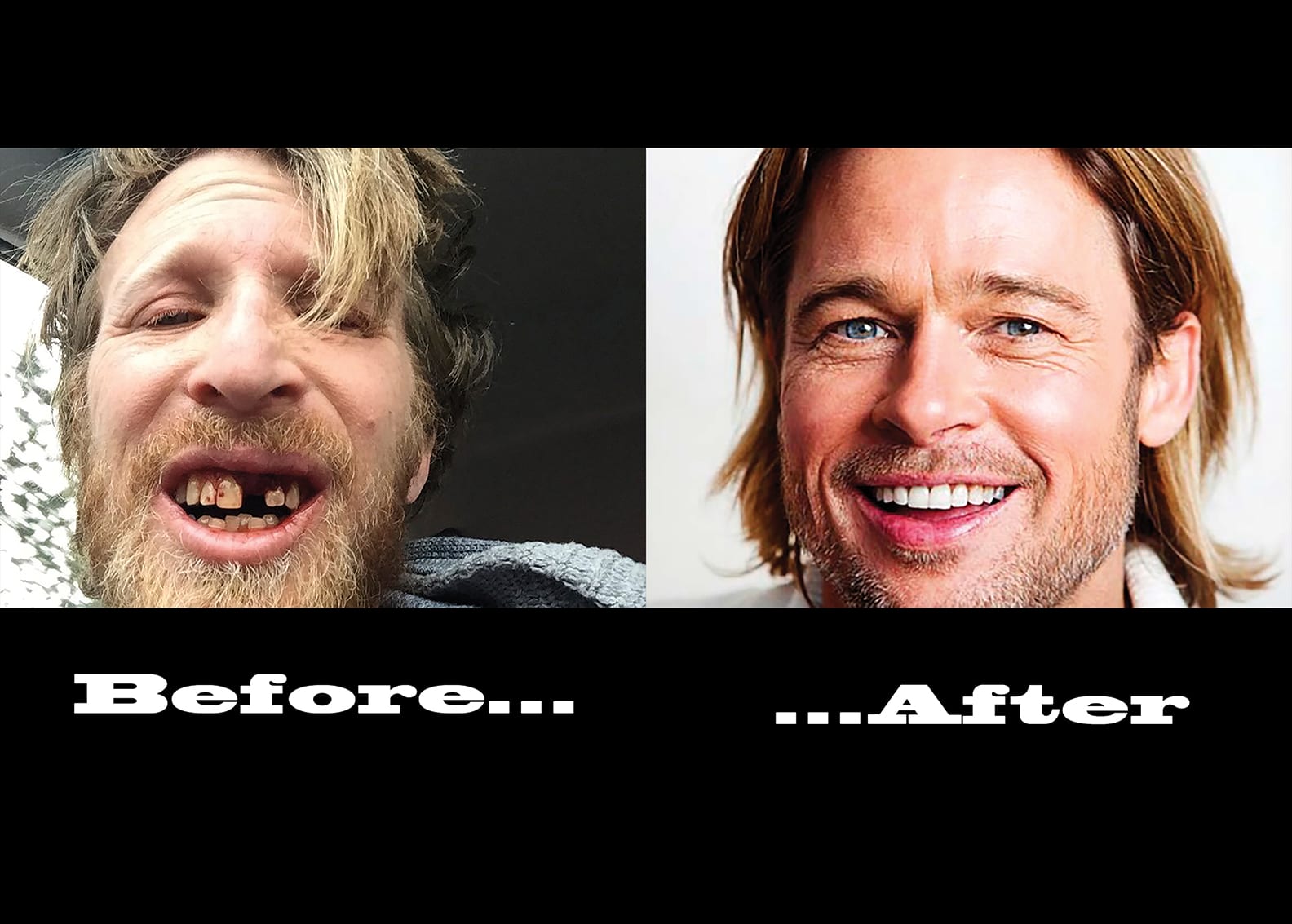 Trials of the Toothless

It’s hard to smile through a season-ending knee injury, but what happens when even your once majestic grin suddenly frightens small children?

The delectable concoction was piled tantalizingly in hand—the crisp bread, the colorful layers of pickled cucumbers, carrots and radish, the mint, spice, pork and mayo. The Southeast Asian sandwich was supposed to be a brief reprieve from what otherwise was my worst day of the last decade. I had just twisted my knee on KT-22, felt a pop and was racking my brain for clues that I might not need surgery. Despite my hopes, I feared the worst.

At least I was about to sink my teeth into this delicious bánh mí.

The resulting jolt was mind-boggling, somewhere between a massive electrical shock and being struck over the head with a mallet. I could hear and feel it echo in my ears, brain, cheeks and gums. I slammed the sandwich violently onto its plate and darted out to the New Moon parking lot, trying to hold back both fits of rage and bouts of tears. Moments later my wife found me in the lot mumbling to myself, feeling fully defeated.

My left front tooth had been an 18-year ordeal for me, dating back to a fateful late night of hockey shenanigans with my brother involving a metal grate, an emergency room, a medieval tooth replacement, a mistaken arrest due to painkillers and a Willie Nelson concert. But that’s another story.

As I muttered incoherently to myself, the notion suddenly dawned on me: “I may have taken a knee to the face.”

It was a gray and dismal late-December day at Squaw Valley, 2015. The light was flat. I hadn’t planned on skiing, instead opting for rest after seven straight days on the mountain. But as I waited for my ski boots to get fitted, I decided to take a lap.

I’d love to blame the injury on a botched backflip off a 60-foot cliff. That’s not what happened. I hit a piece of ice on a steep slope, slid out of control and my knee went in the wrong direction. I took a tumble. After taking inventory of potentially injured body parts, I managed to ski down on my own accord. But deep down I knew something was wrong.

Back in the New Moon parking lot, I touched the tooth with my tongue. It moved. I shuddered and drove immediately to the dentist in Tahoe City. That’s where I received the bad news. Not only did my tooth break, it broke halfway inside my gum-line and was somehow still connected. I needed a new tooth, but it was going to be complicated.

A few days later, the results of an MRI revealed that I had blown the ACL in my left knee. The only good thought I could muster was at least I could get my knee and tooth repaired at the same time. But that shred of silver lining was quickly dashed. The doctor said if I opted to get my tooth fixed, he would not operate on my knee. It was one or the other due to the chance of infection connected with oral surgery.

I was forced to decide what was more important, my Brad Pitt–like smile or my ability to walk down the street. I chose to address the knee first.

As luck had it, my oral surgeon was about to go on vacation, and my newly reconstructed ACL needed three weeks to heal before I could undergo mouth surgery. The outcome was six weeks with a broken tooth hanging out of the front of my mouth.

When the time finally came for oral surgery, I’m not sure which was worse, the actual procedure or the doctor explaining it. This wasn’t going be a simple pulling of a tooth and inserting a fake one. The gums above the broken tooth needed to be rebuilt, which required gum tissue to be farmed from other areas of my mouth. It was going to be an ordeal.

Going into my first of three oral surgeries—each of which required three months of recovery—I picked up a prescription for Halcion. I checked the side effects of the pill. They included amnesia, hallucinations, rage, violent and bizarre behavior, depression, aggressiveness, severe allergic reactions, anxiety, confusion, hostility, psychosis, addiction to the drug and even death. I was assured I’d be fine.

I popped the pill, staggered into the oral surgeon and woke up dazed and confused—and feeling like I had just gotten out of the ring with Mike Tyson.

On our drive home I held an ice pack on my face and a towel for the drool. As we approached the Northstar stoplight, I needed to spit. Instead of opening the window, however, I opened the door and tried to step out of the car with my seatbelt on. After yelling at me to get back in the car, my wife had to hold my arm in and physically shut the door. 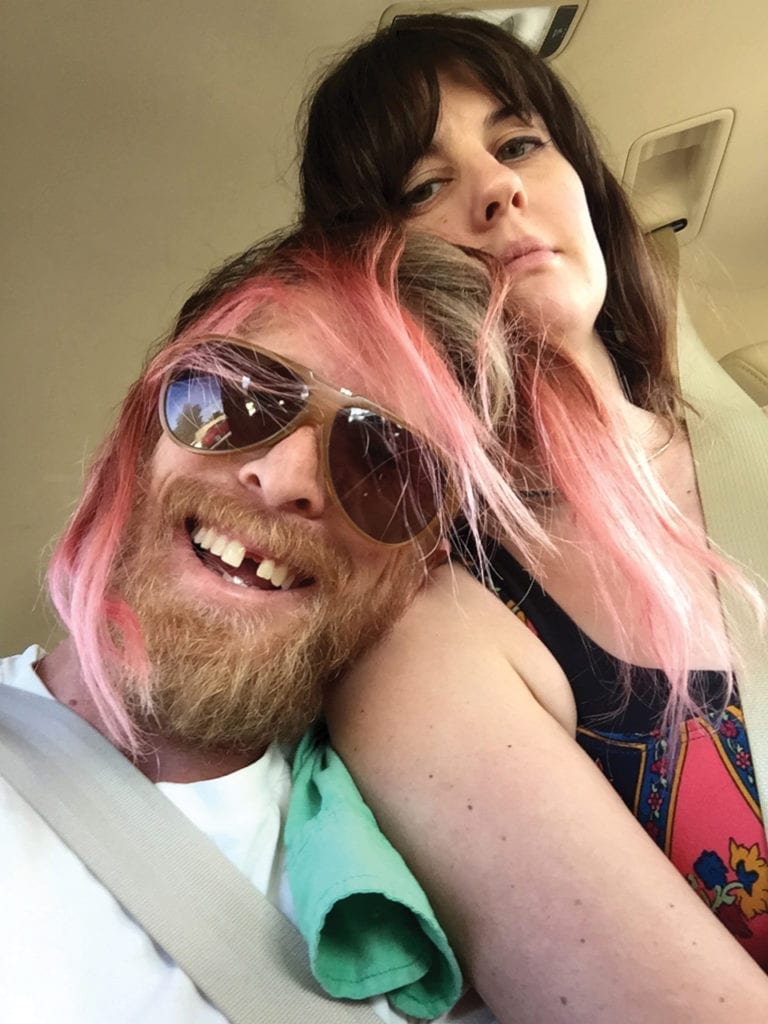 Rehabbing from injury—or dual injuries, in this case—is easier with a loving and patient wife by your side, courtesy photo

At home and on the couch, I was instructed not to move while my wife went to fill my CVS prescription. Thirty minutes later she came back to find me naked in the living room and wet from taking a shower with no knee brace—two things I was specifically not supposed to do after surgery.

The most unique aspect of my 14-month ordeal was that, despite blowing out my knee, no one could get past the tooth. Most people never even asked about my knee. Maybe it was because I refused to wear the flipper (tooth retainer) in public. Every time I wore it, it would magically pop out during conversations. When I drank water, it squirted out the top. Needless to say, my level of professionalism was not up to par.

I actually became a bit of a folk hero to my friends and a god to small children, who completely freaked out when I pulled my tooth off its supposed socket for a joke. Some thought I was messing with them by not getting it fixed for 14 months. They thought I was soaking up the attention.

No one could really understand how mangled my mouth was. Not only that, but because of my knee injury, I was forced to watch the snow from the couch. I work as a ski photographer and ski regularly. Not only did I lose my enjoyment, I lost part of my livelihood.

Over time I actually (kind of) got used to it—so used to it that I would talk with strangers or business clients without my tooth and think it was no big deal. To my instant recognition, it was clear that it was a big deal. My normally dashing appearance had suffered a significant blow. People would look at me and smile, and when I smiled back, it was all over.

Then there was my newfound lisp. It’s truly amazing how often your tongue hits your front tooth when you speak. When that tooth is gone, so is your ability to enunciate. Try saying the word “tooth” with a front one missing. It’s empty air. 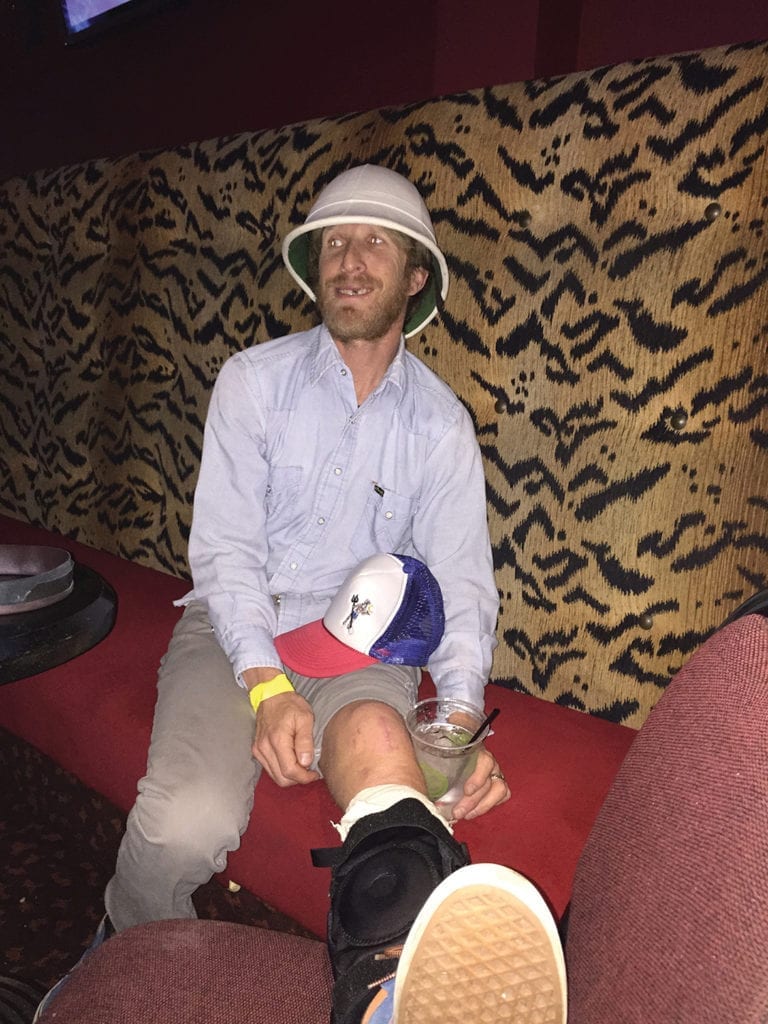 Down but not out, the author ices his surgically repaired knee with a drink while enjoying music at the Crystal Bay Club, courtesy photo

So, when my gums were finally rebuilt and my new tooth in place, I walked out of the dentist with a rejuvenated pep in my step. My Brad Pitt–like smile was back.

Despite this encouraging development, some of my friends were legitimately upset. They said things like, “Oh, we thought you were going to keep rocking it,” or, “It looked awesome.” All of a sudden I felt like I let my community down. Clearly a year of toothless and knee-less depression is funny for people.

Even though I am happy to entertain and amuse, it feels good to be back on both feet and to flash a full, toothy grin without it being returned with expressions of shock and bewilderment.

In the ski-dependent world of Tahoe, losing a ski season is enough to rob you of your smile. But I learned that losing your smile altogether is a true test of your ability to survive an injury-shortened ski season.

While some may be missing the hilarious appearance of my hobbling, toothless alter ego, I’m glad to have my smile and my ski legs back as the snow flies this winter.