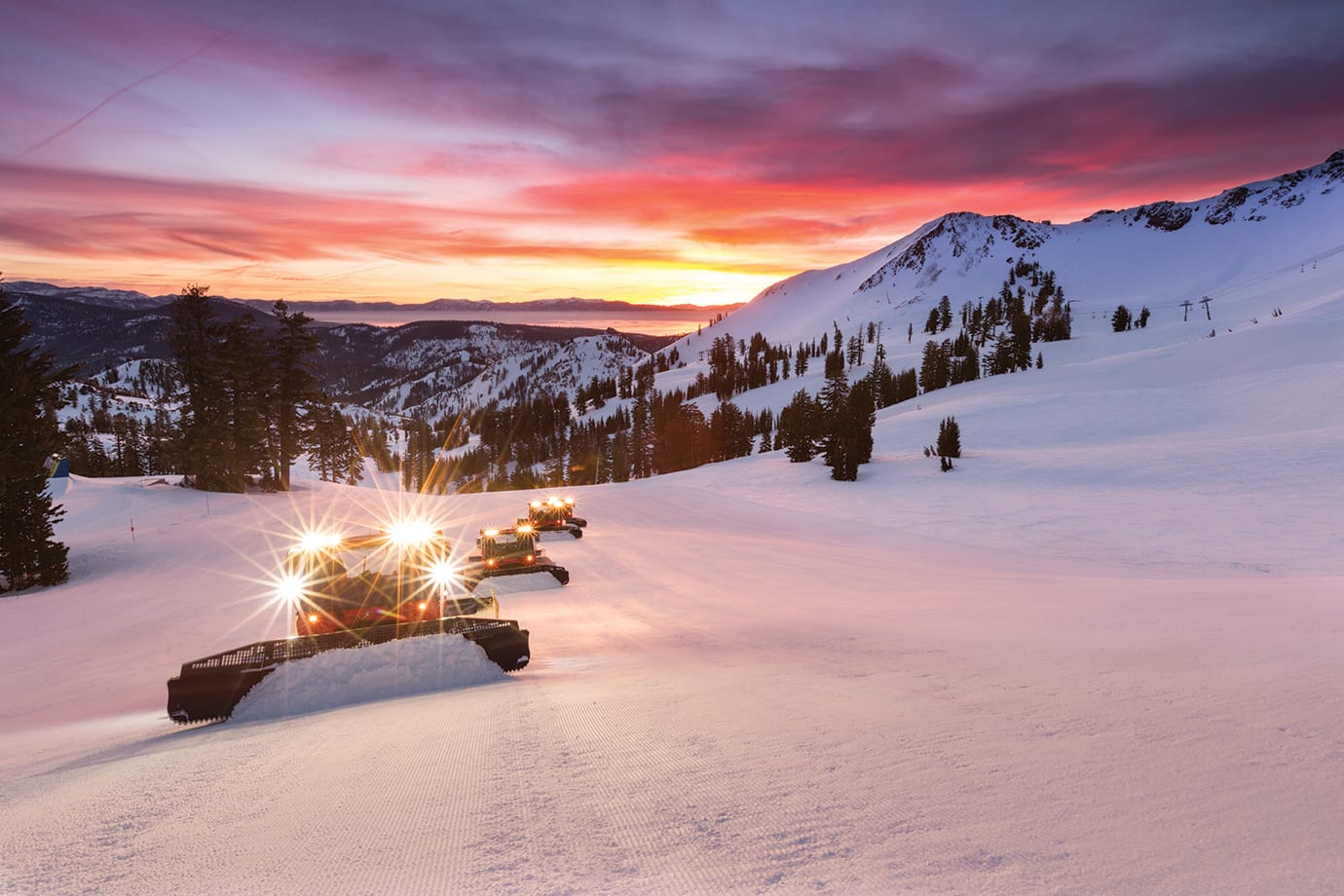 Snowcats march upslope at Squaw Valley, laying down corduroy to be enjoyed in the morning

It will be hours before the sun peeks above the shoulders of Marlette Peak, splashing pink color into Emerald Bay and across the freshly frosted peaks of Squaw Valley. Pine martens and marmots rest snug in their burrows at the base of the heavy snowpack, safe from the sharp talons of owls patrolling the pre-dawn darkness as a cold breeze whips fresh snow across the barren slopes.

Through the black silence emerges the whir and lights of a fleet of futuristic red machines, PistenBully snowcats growling up and across the steep slopes of Squaw Valley, marching from one end of the resort’s six peaks to the other in an orchestrated diesel ballet, laying down ribbon after adjacent ribbon of pristine corduroy.

Squaw Valley snow surfaces manager Kurt Wilhelmy has been grooming these world-renowned pistes since the classic winter of 1995—a dream job that he still thoroughly enjoys after 25 years.

“I remember skiing at Squaw as a kid thinking how much fun it would be to groom, so that was my first choice of a job,” says Wilhelmy, who is rarely seen without his favorite grooming partner, Rusty, a 2-year-old King Charles Spaniel. 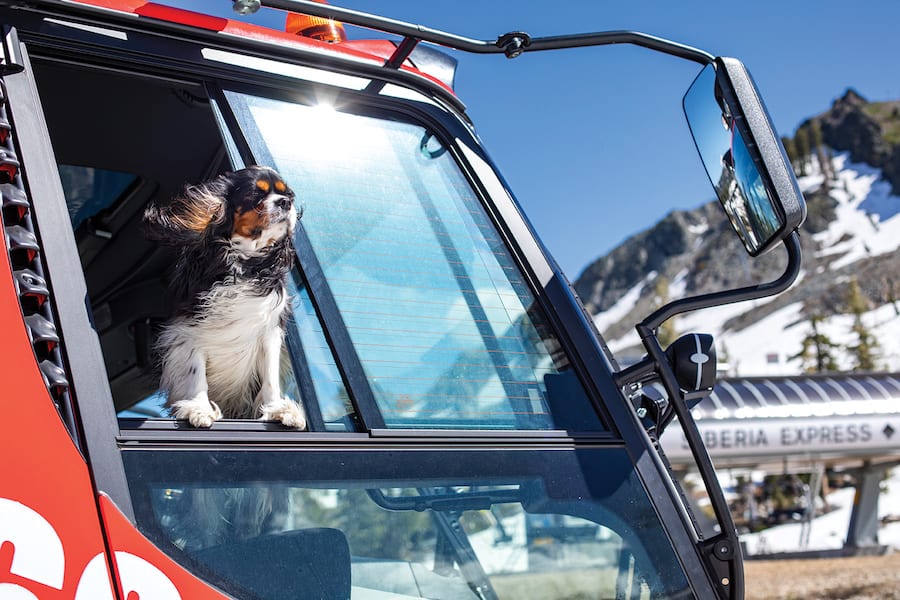 Rusty the King Charles Spaniel takes in some fresh air from the cab of his owner’s grooming machine, photo by Grant Kaye and Mike Okimoto

Boss on the Mountain

Wilhelmy currently oversees a nightly workforce of up to 26 grooming machines, both winch cats that push snow uphill and free groomers that roam the mountain, moving snow through all the nooks and crannies of the resort. He prioritizes the groomers’ activities in either a swing shift from 4 p.m. to 1 a.m. or a graveyard shift from 1 a.m. to 9 a.m., and answers the calls of the mountain manager, patrol director or any other department that has grooming needs.

While the seasoned pro is held in high esteem by his fellow groomers, Wilhelmy had to earn his respect in the early days, often with little assistance.

“The experienced guys shared limited knowledge and you had to take their help cautiously,” he recalls. “Sometimes they just gave you bad information to see how well you could figure out how the machines operate. We did have some really good operators that would help, though—if you were a good listener and a good skier.

“Herb Clegg, Frank Conway, Dave Butterfield, Dave Martini and Jeff Dailey were some of the best groomers,” Wilhelmy continues, “and if they were giving you feedback, you listened. They were going to take you places where only the experienced groomers were able to go.”

Wilhelmy concedes that he learned some lessons the hard way. Like the time he was building a road during his second year on the job, and the road unexpectedly gave way. With it went the entire slope below him, sending Wilhelmy and his machine sliding down the mountain with the snow.

“It was everything that I could do to keep the tracks moving and point the machine down the hill. Luckily the machine stayed on top of the slide and I was able to ride it out without any damage to the machine or me,” says Wilhelmy. “I did go back and finish the road.” 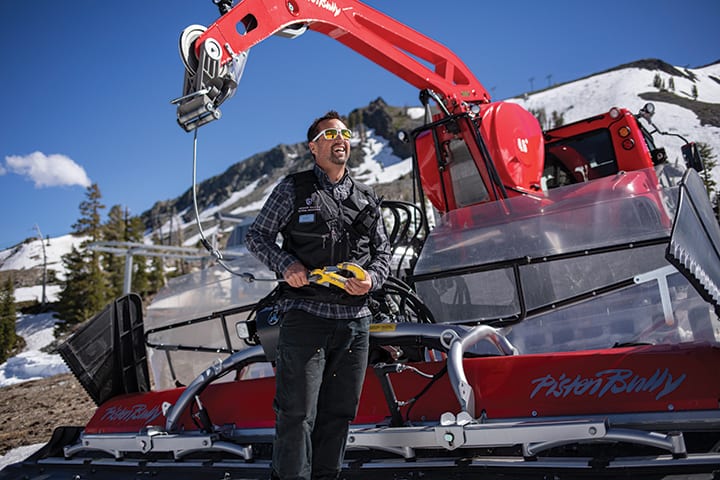 Although the practice of grooming a slope is far from new, the technology behind the latest machines is far superior to their predecessors, Wilhelmy says. He’s particularly enamored with Squaw’s PistenBully 600 winch cat, which boasts a satellite tracking system that monitors the driver’s location down to the inch.

“I love the technology in it, the performance of it, the balance of it,” says Wilhelmy. “Winch cats are the most technical of all grooming machines, because not only are you doing what all other grooming machines are doing, you’re adding the complexity of controlling a winch with 1,000 meters of cable on it as well.”

Such capable machines are crucial at Squaw Valley, where steep winch-specific runs provide an exciting element for groomers. Wilhelmy points to Siberia and Headwall face as two of the resort’s most difficult winch hills.

Located at the top of a ridge, Siberia gets blasted by a near-constant wind that prevents the snow from sticking. As a result, a winch cat driver must be precise in building snow over the thin ridge. The precipitous slope of Headwall face is even more challenging to groom, Wilhelmy says, and requires just the right conditions to even attempt it.

“If the snowpack has not firmed up through multiple layers, we will not even try it,” Wilhelmy says. “But it has the best view of the top of KT and the valley of all of the groomed runs at Squaw.”

Headwall is also where Wilhelmy experienced one of his most memorable wildlife sightings. It was early morning, just before sunrise, when he spotted an owl swoop in and pluck from the snow what he initially thought looked like an old sock. As the owl flew into the darkness he could see that it was no sock. It was a pine marten. 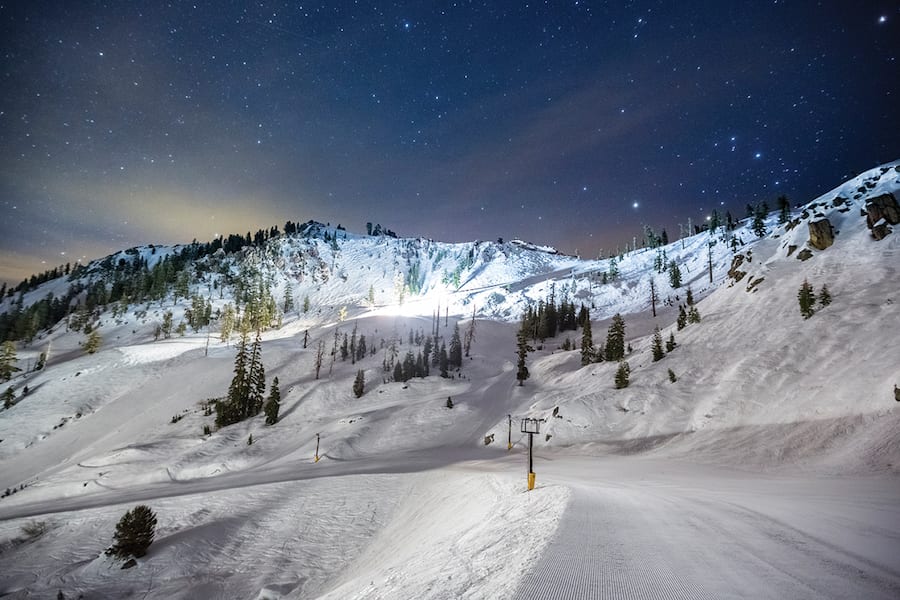 The relentless nature of back-to-back-to-back cold storms in January and February made the 2018-19 season one for the record books. In one of the storied resort’s longest-ever seasons, Wilhelmy and his team were still driving four-by-four trucks up Mountain Run in early July to hop in snowcats parked at the edge of the receding snowpack and push the snow around to keep the lifts spinning for the holiday festivities.

The prodigious season—Squaw Valley recorded 682 inches of snow—caused Wilhelmy and his groomers no small amount of lost sleep as they struggled to keep up with the deluge. Yet, they didn’t complain.

“It was actually really enjoyable. Seasons like this are what we remember and look forward to,” says Wilhelmy. “Most of us are here because we love snow—and we had plenty.” 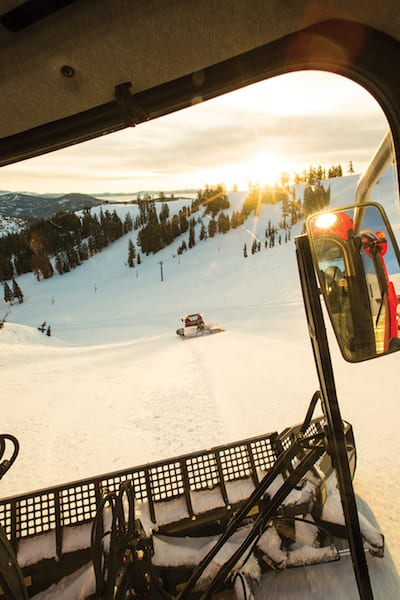 The view from the cab of a grooming machine

Regardless of the weather, Wilhelmy says each and every night is different and provides its own sense of magic. Some nights offer full moons, others none at all, leaving countless stars twinkly brightly above. Wilhelmy and crew are treated to stunning sunrises and sunsets and work through stormy nights when 100-mile-per-hour winds reduce visibility to zero.

“My favorites are the full moon bluebird nights, when it is eerily quiet, and you can see the lake shimmer from various parts of the mountain,” Wilhelmy says. “The way the entire mountain lights up and sparkles in the moonlight is a view that only a few individuals have the opportunity to experience.”

Even in mundane seasons, Wilhelmy is thankful for the opportunity to groom the slopes of Squaw Valley, where his boss is one of his best friends and his fellow employees feel like extended family members.

“When I drive into the valley and look up at the Tram Tower, I am just as excited now as when I was a kid to think what my day is going to be like,” he says.

As for Wilhelmy’s trusted companion, Rusty, he too appreciates his nightly routine, particularly the heated cab of his owner’s snowcat.

“Rusty loves the snow, but he isn’t a fan of being cold,” says Wilhelmy. “So sitting in a warm snowcat watching the world go by makes him think he is one big dog every day.”

Grant Kaye is a Tahoe-based professional photographer and educator. He encourages skiers and riders to give thanks to Wilhelmy and Squaw’s tireless staff of groomers the next time they step into their bindings on a postcard-perfect bluebird day.