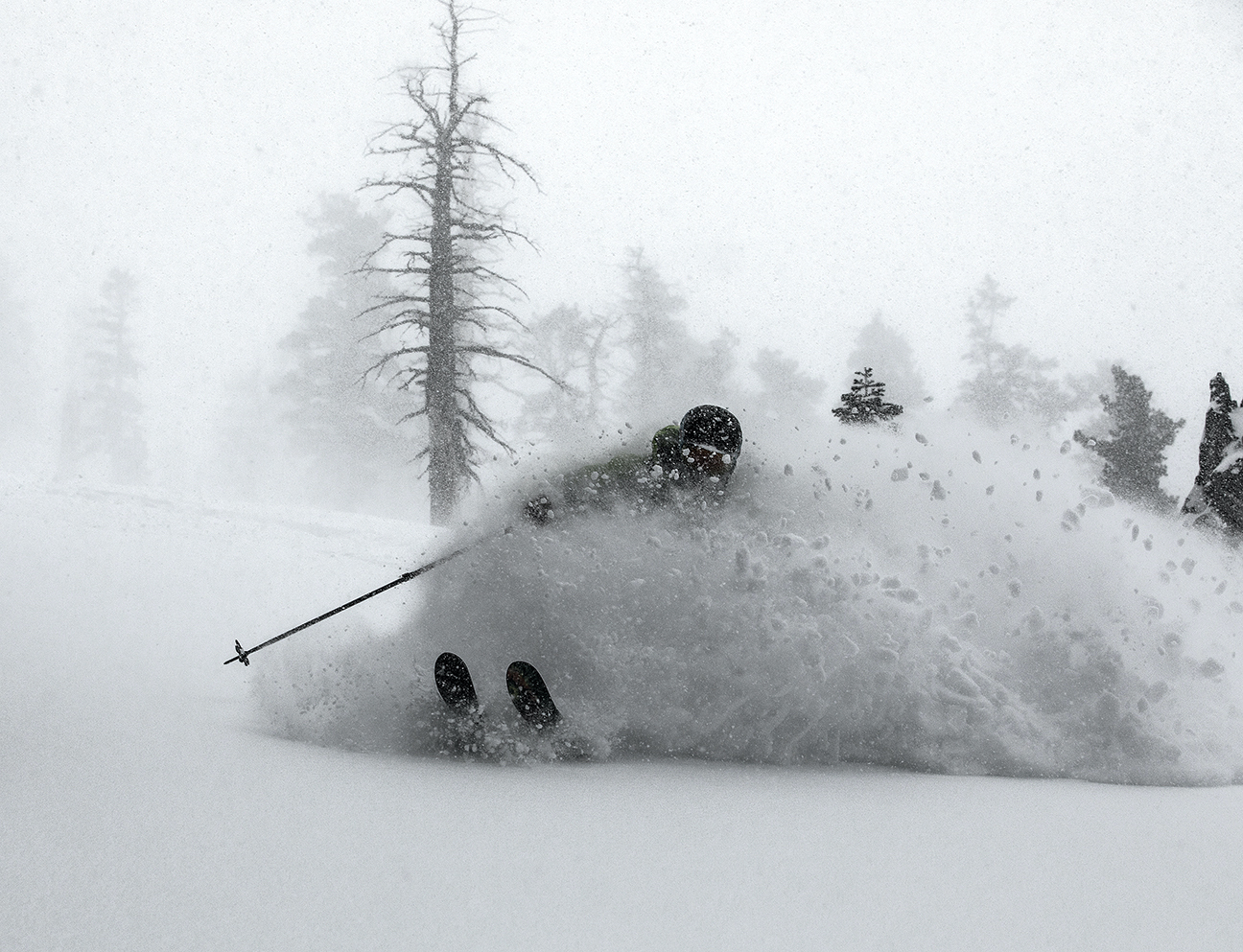 For many skiers and snowboarders, the allure of bounding down a fluffy slope of fresh snow is an irresistible force that borders on obsession

We love it and we pine for it, but why do we covet the white and fluffy so?

Why do we shirk our work, freeze our tails off and honk our horns in traffic over it? What is it, specifically, about a P-Tex underbelly grazing across a buffer of frozen water and air that really gets our insides a-tinglin’? Why does a wholly dangerous, ludicrously expensive and increasingly crowded activity have such a mesmerizing grasp on skiers from Tahoe to Tokyo?

Because it’s fun, you say? It sure is. But so is watching cats chasing bears on YouTube. Bingo is fun. It goes deeper than that.

Powder touches our psyche and tickles our third eye wide awake. And there isn’t any singular reason, as it resonates with people in different ways. For skiers and snowboarders alike, fresh snow is an ineffable element that shrouds any way of truly putting into words that feeling at the bottom of a pow run.

Yet, we ask snow lovers for their words on the matter anyway, revealing a colorful collage of motives, deep emotions and transcendental thoughts of good times.

“All things excellent are as difficult as they are rare,” said Dutch philosopher Baruch Spinoza in the seventeenth century.

He could have been referring to a fresh coat of cold smoke on a December morning. Between low snow years and the fact that snow conditions change minute by minute, a truly untouched line over fresh, quality snow is a treasure.

“Powder is the cookie jar that mom put up on the top shelf that you can’t have all the time,” says Tahoe snowboarder Sam Wallace. “So when you do get it, you say, ‘How did I stumble upon this?’ You see that untouched patch and you’re like, ‘Do I deserve this? Am I worthy of this?’”

Not only is untracked snow relatively uncommon, it’s in constant flux. As the saying goes, every snowflake is different, so when a billion of them are dumped on a slope, conditions are naturally going to vary.

“In 11 years, I’ve never skied the same storm twice. The texture is always different,” says Tahoe resident Mike Rogge. “Pow is an equal-opportunity pursuit. You get it by luck and by working hard and getting up early. You can even spend a ton on heli- or cat-skiing and still not get it.”

If It Were Easy, They’d Call It a Groomer

The act of staying afloat on powder presents infinite variations. The interplay of weight and gravity over a squishy and collapsible surface requires minute adjustments with real-time feedback from the grandmaster coach that is Mother Nature. One second we are bogged down and sinking, the next we are flying.

“It’s easy to look like an asshole skiing down the hill, but to get it right is an art form,” says Rogge, who enjoys the opportunity to watch local masters in action, like Jeremy Jones or Cody Townsend or the dozens of other skilled practitioners who call Tahoe home—whom he calls the “Slashes and Jerry Garcias” of pow mastery.

Chris Cawley, an avid backcountry skier and 15-year resident of Alta, Utah, relishes the challenge of a good Wasatch wiggle now more than ever.

“What I love about powder skiing is that it just gets better and better the more you do it,” he says. “Like a lot of other skiers, as they age, I have found that fluidity, or constant motion, or the feeling of being in control—if perhaps in view of the edge of it—that is the holy grail. It’s a more sustainable relationship to glisse in the short term and the long term.”

Once experiencing the joys of powder, we eagerly come back for more, driven largely by a chemical reaction that occurs in our brains.

“The chemical that is likely most responsible for the giddy feeling of skiing powder is dopamine,” Dr. Cynthia Thomson, a professor of kinesiology in British Columbia, tells Men’s Journal.

Surely the immensely complex organ between our ears reacts to face shots and cliff drops. Not surprisingly, one of the brain’s powerful neurochemicals is a primary factor.

Described by author and skier Steven Kotler in The Art of Impossible: “Dopamine is a feel-good drug produced by the brain to drive behavior. Dopamine feels really good.”

Yes, this is a highly over-simplified description, as a multitude of other chain reactions are taking place in our noggins, but dopamine is mentioned at a high frequency in relation to the brain’s reaction to sports and movement—and why it’s so enjoyable.

Interestingly, dopamine doesn’t show up after our risky, feel-good experience as a reward for making it through the day. It shows up beforehand, to make us feel good to encourage us to get after it.

Professional Tahoe skier Amie Engerbretson was ripping around with a scientist friend last winter, and he asked her if it was the “low-friction coefficient” that everyone loved so much about fresh snow.

Engerbretson paused, having never thought about it that way, and replied, “Yes!”

Sliding at high speed over a powder-covered slope is the closest we can come to weightlessness—a smooth, floating feeling with little resistance atop an incredibly forgiving material.

We can all relate to this, whether staring down 3,000 feet of stable, mid-density snow off Mount Tallac or blasting a mini-turn of pow just off the groomer at Homewood.

“The more time I spend skiing untracked pow,” says Cawley, “the more I realize how different it can feel and look and sound when you slow down sometimes. Whereas maybe I often used to want to make big turns and get huge face shots all the time, now I get a lot of pleasure out of spending time on the slope, appreciating the unweighting after the ankle flex and the pole plant, seeing the snow pass below me.”

For former Tahoe resident Melanie Silwick, riding the legendary deep powder of Mount Baker while living in Washington served as a therapeutic pastime after she was diagnosed with Crohn’s disease. While the disease negatively impacted her ability to snowboard, it also provided a valuable source of hope during a difficult time in her life.

“Snow helped keep me sane, made me feel human and gave me something to look forward to during my deepest, darkest moments with Crohn’s,” Silwick says. “The thing about floating through powder is that if you know, you understand the addiction and the need for turns to ground you, and if you don’t, it’s just another hobby.”

Another reason powder is sublime is that it offers its joys through many different channels. A youngster might need a big huck to provide the fix, whereas the next gal or guy might treasure the time spent with other people on a storm day.

Rogge, who is father to a 3-year-old son, finds ecstasy in passing the love to the next generation. Some of his best snow days look quite different than a decade ago, when he was fresh to Tahoe, but no less rewarding.

“My best pow day of last season I was skiing with my 3-year-old son in a backpack,” he says, describing skiing over a low-angle cross-country downhill track. “He just kept saying to me, ‘More powder, Dad, more powder.’”

Tahoe snowboarder (and surfer) Dave Zook loves powder for the fact that he can make 100 “surf” turns in one day that he can’t do in a lifetime in the ocean. 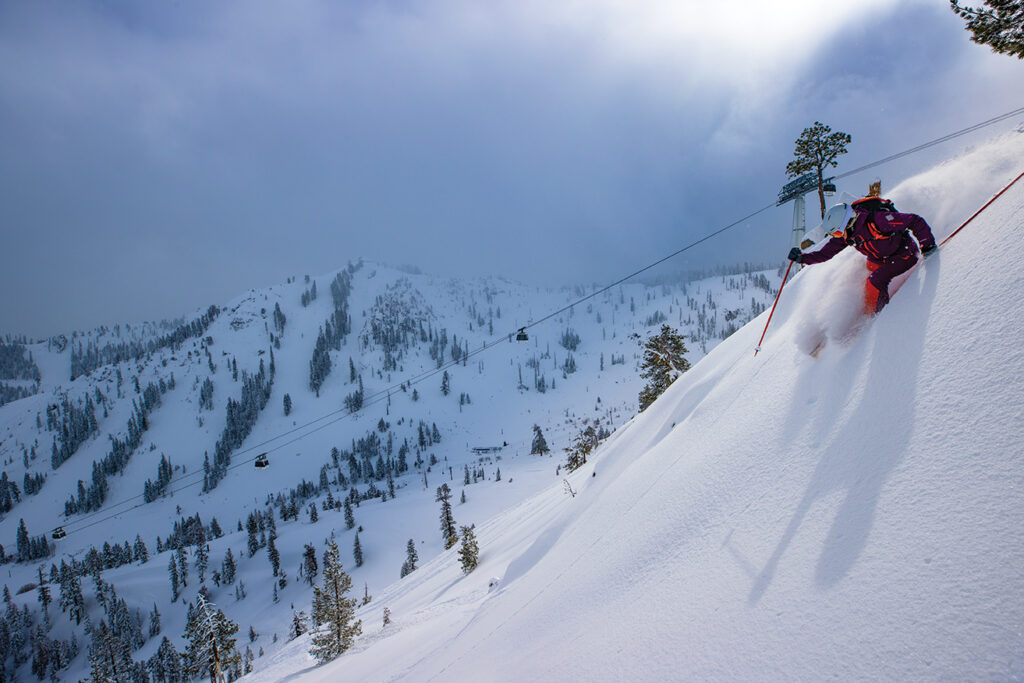